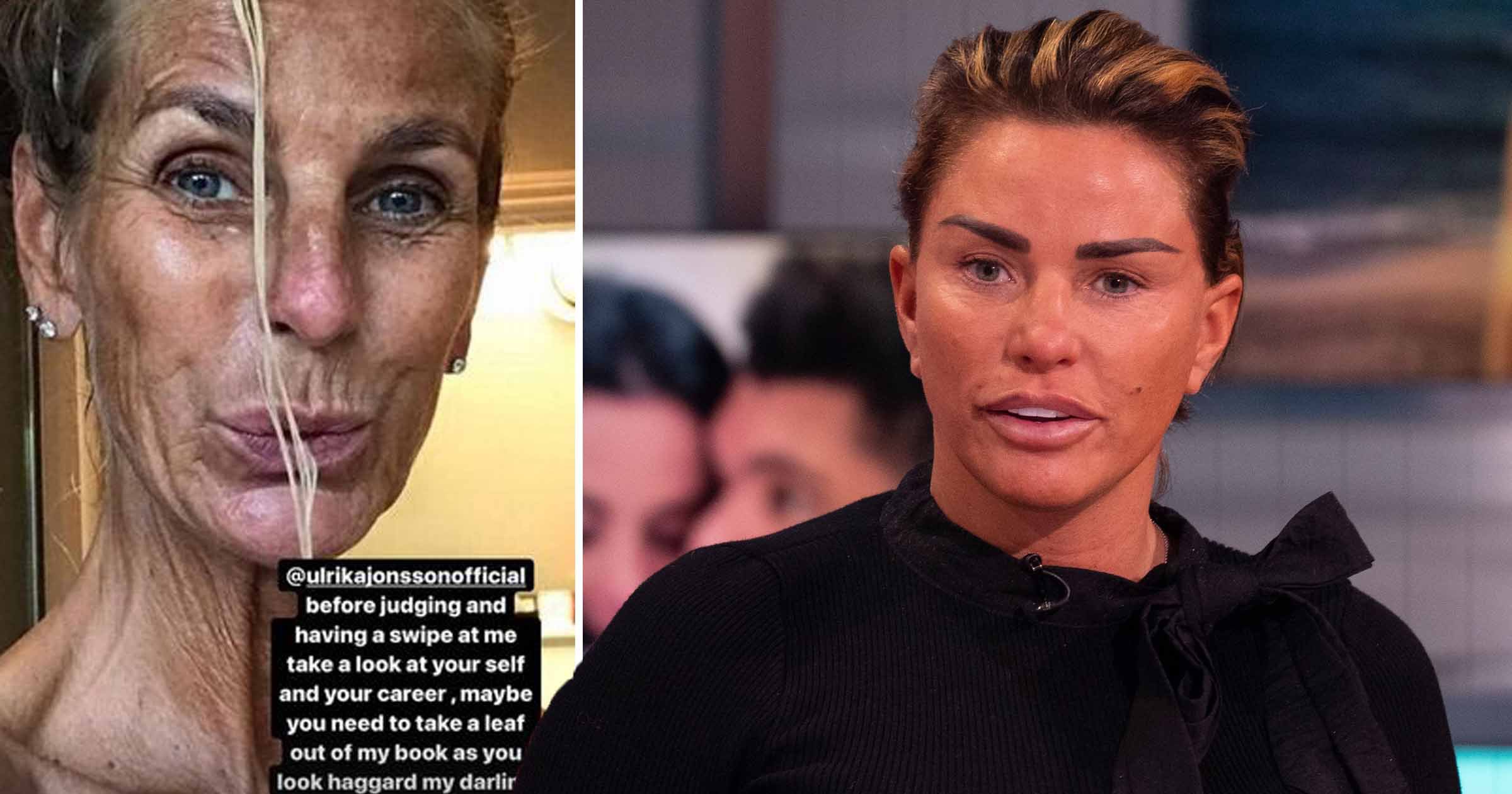 She became the subject of the TV presenter’s latest column, titled ‘Katie is not hungry for fame… She’s starving’, in which Ulrika said that she was horrified by the mum-of-five’s latest surgical procedure.

However, the 43-year-old wasn’t too thrilled by the comments, and took to Instagram to have her say.

Sharing a now-deleted snap of Ulrika on her story, she wrote: ‘@ulrikajonssonofficial before judging and having a swipe at me take a look at your self and your career, maybe you need to take a leaf out of my book as you look haggard my darling.’

The post is no longer visible on her page, and the 53-year-old has not publicly responded.

Katie’s words come after the Gladiators host shared her thoughts on her plastic surgery.

The Big Brother star has never been shy about going under the knife, and jetted to Turkey last year where she underwent full body liposuction, a cup lift and ‘fox eye’ lift.

Speaking of her history of operations, Ulrika penned in the Sun: ‘Now she has, once again, exhibited and paraded publicly her latest plastic surgery, and I can’t deny I am quite horrified by the images. As a mum, I also wonder what her children must feel.

‘Outwardly and publicly, she boasts about her happiness, showing it off for all the world to see at every given opportunity.

‘But her constant transformations don’t seem to have brought her much happiness because it’s been a perpetual cycle since 1998 when she set out on this journey of cosmetic metamorphosis.

‘I sincerely hope she can find true inner happiness and learn to genuinely love herself instead of constantly believing inner peace and contentment exists under the surgeon’s knife.’

Katie has always been vocal about going under the knife, and has given fans a front-row seat into her procedures – sharing footage on her Instagram and YouTube pages.

She also opened up on the surgery during a recent appearance on Good Morning Britain, vowing that she is not ‘addicted’ to switching up her look.

‘If you get a scratch on your car, you fix it,’ she insisted. ‘I’m not trying to look younger, and I definitely don’t want that alien look. I could go over the top, but I don’t want to look like a freak.

‘I’m not addicted, but it’s out there and if I feel like I need to freshen it I would.

‘If people want to say I’ve got body dysmorphia, just say it – even my mum says it, “You need to see somebody! You’re not normal in the head, are you?”’