As thrilling as it is when a celeb goes public with a new relationship on Instagram and we get to watch the thirsty content roll in (yes, I’m obviously talking about Travis Barker and Kourtney Kardashian), not every celebrity wants to make that part of their life public. Which (a) is understandable, and (b) brings us to Keke Palmer. Due to the fact that the actor/singer/TV personality is pretty much the actual best, inquiring minds want to know who she’s dating. But thanks to this thing called privacy, Keke isn’t out here announcing her breakups and makeups on social media. However! She has *occasionally* opened up about a few aspects of her personal life (and she *is* low-key dating someone), so here’s what’s up with Keke Palmer’s boyfriend/girlfriend sitch for those aforementioned ~inquiring minds~.

While Keke has been linked to Meek Mill and her Brotherly Love costar Quincy Brown, she rarely speaks publicly about any of her relationships. I mean, here she is kinda confirming things with Rodney, her partner at the time, in 2012, but it’s all pretty vague:

And when Keke does open up about her personal life, she tends to leave out the details. Like, here’s a video diary from 2016 where she talks candidly about being heartbroken and unable to move on from an ex. The person’s name? Not! Dropped!

While the rest of us are out here panic-sliding into the DMs of random celebrities, Keke told Harper’s Bazaar that she is not into dating other celebs, though she has been known to use the fancy-shmancy dating app Raya:

She also confirmed as much when Bachelorette star Mike Johnson asked her out in public on Strahan, Sara & Keke, saying, “I don’t know, it really scares me to date people in the industry. That’s number one. Number two: He asked me in front of everybody. I felt totally, like, ambushed. I felt ambushed. I felt like it was a big ol’ gag. I’ve been doped.”

“Where love is, that’s where I’m going,” Keke said in an interview. “That’s what I’m about, it’s not about all the other stuff. It’s just about love. If that’s a guy, great. If that’s a girl, great. It doesn’t really matter to me.”

She Keeps Relationships Off Social Media

Keke told Harper’s Bazaar, “I don’t really do relationship stuff online, mainly because I don’t know how I would do it without looking, like, cheesy or something, you know? Yes, I’m a hundred percent authentic, but there is stuff that I do save for family and friends. I do have a Finsta. Sometimes I forget to post on there ’cause I do post a lot of real moments and raw moments on my main Instagram page. But at the same time, when it comes to romance, [posting about it] doesn’t really come naturally to me, so I feel like, why force it?”

As she put on Insta in April, “I don’t believe in girlfriend and boyfriend. I’m single till I’m married. Let’s just kick it love 🙄.” 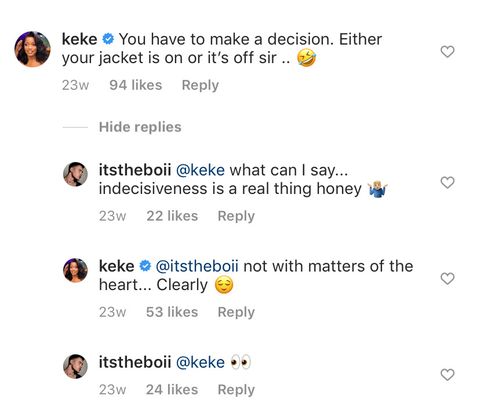 Keke and Styn were first linked in December 2019, and they were photographed kissing on a coffee date in Los Angeles back in February. But again, Keke is keeping things private. As she told Page Six a few months before the kissing pics dropped, “Yes, you know I have some love in my life, you know there’s some love there. You know, it’s not a love life if I share with you because it’s public. So at the end of the day, just know your girl Keke is not lonely—ever!”