Kelly Osbourne won’t put up with any negative comments about her weight — especially after going through “the hardest year” of her life due to her relapse.

The television personality hopped on her Instagram Stories Tuesday to share a screenshot of an email she allegedly received from the National Enquirer, asking for a comment from her for an upcoming story. Per the message, the tabloid was getting ready to run an insensitive article about how Osbourne has “put on a tremendous amount of weight after slimming down significantly earlier this year.” The story also quoted “sources” who claimed the former Fashion Police star “has been dealing with the stress of her relapse by eating.”

At the end of the email, the person asked Osbourne to respond to the outlet and editor-in-chief Dan Dolan if she had something to say on the matter. However, instead of giving the National Enquirer her response directly, she ended up delivering it on social media:

“This is what I have to deal with on a daily basis. Feel free to email Dan and tell him what you think about them fat shaming me.”

And yes, she left his email clear to see for all her followers. Snap!

Osbourne went on to write in another IG Story:

“This has been the hardest year of my life. I was compliantly and utterly broken. I am still putting myself back together again. I am happy. I am healthy. That’s all that should matter.”

For sure! You can ch-ch-check out her posts (below): 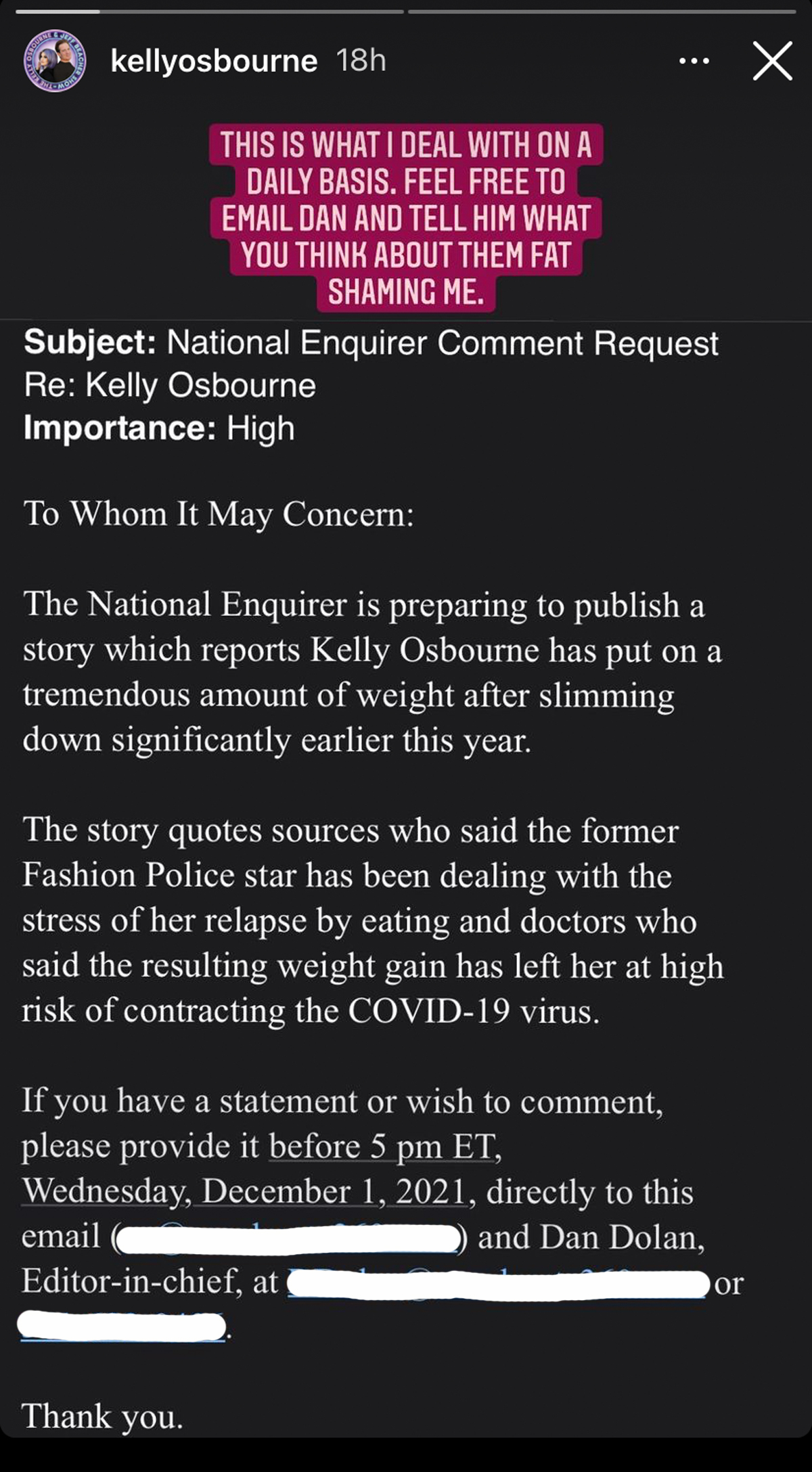 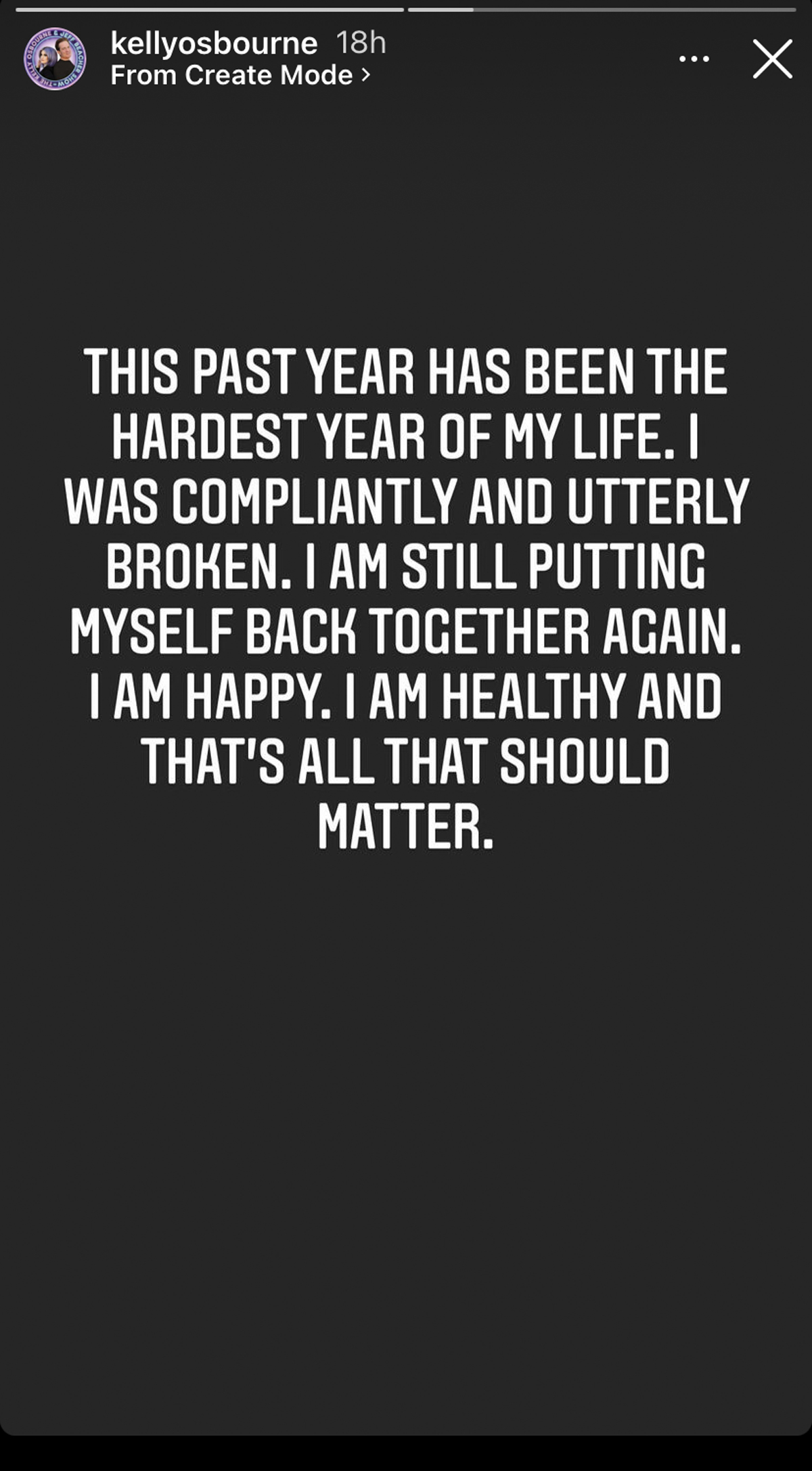 2021 certainly hasn’t been an easy time for The Osbournes alum. Back in April, Kelly revealed she had relapsed after nearly four years of sobriety. While admitting she was “not proud of it,” she also said she was already “back on track,” expressing:

​​“I just want to let you know that I am sober today. And I’m going to be sober tomorrow. But I’ve learned it truly is just one day at a time. And I just want to tell you guys the truth because I never, ever want to lie to you. Thank you so much for your support and your love.”

How did this happen though? Well, Osbourne later confessed to Extra that she believed she could drink a little again since enough time had passed from when she first got sober. After all, a lot of celebs have been trying the “California sober” route, allowing alcohol and weed while abstaining from harder drugs. But it turned out that wasn’t possible for Kelly, as she explained:

“I am an addict and had thought that I had enough time under my belt, and I could drink like a normal person. And it turns out, I cannot, and I will never be normal. I don’t know why I even tried it.”

“This is something I am going to battle for the rest of my life. It’s never going to be easy. Through being accountable and owning your own journey and sharing what you can go though you can help other people. That’s why I came clean, I could have sat here and nobody would know.”

Despite it being a difficult time for Osbourne, she still has had a lot to celebrate. She even not only marked her 37th birthday in October, but she also accomplished a major milestone in her sobriety journey: five months sober.

“I am filled with so much gratitude it’s almost overwhelming!”

The National Enquirer nor Dan Dolan have commented on Kelly’s online statement at this time, but we will have to see if they take the hint! Thoughts on her clap back, Perezcious readers? Sound OFF in the comments!