Looking cool as a… cucumber! Kendall Jenner steps out in all green gym wear after she was mocked over her ‘insane attempt’ to cut the vegetable

Kendall Jenner stepped out in all green on Thursday hours after being mercilessly mocked over her ‘tragic’ attempt at cutting up a cucumber.

The supermodel’s bizarre cucumber cutting technique was noted by fans during the most recent episode of her family’s Hulu show The Kardashians, when she was seen making a snack at her mom Kris’ house.

On Thursday, the reality star appeared to take inspiration from her latest meme-worthy moment as she rocked a bright green sports bra and matching leggings. 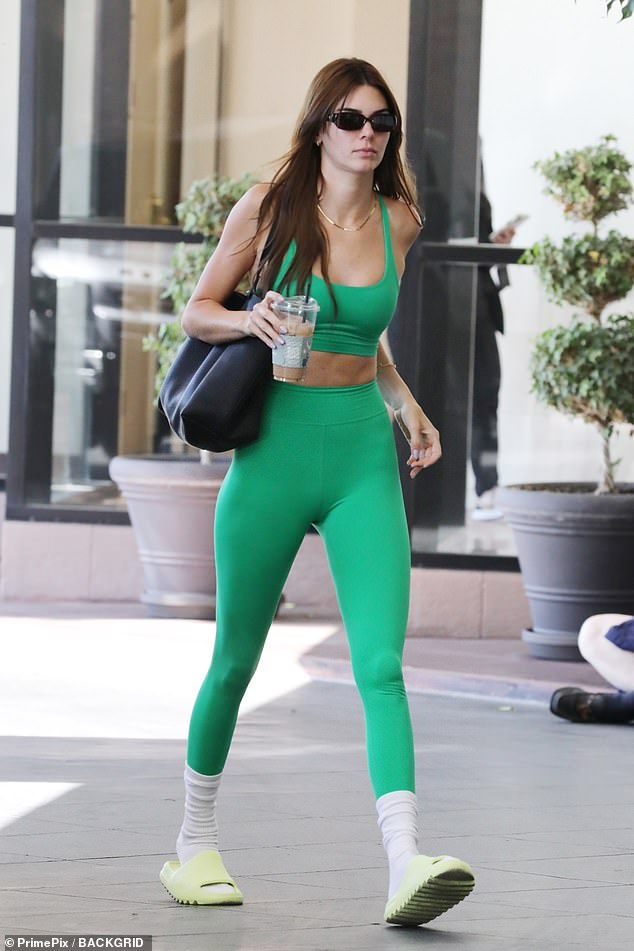 Model off-duty: Kendall Jenner showed off her runway-worthy physique while out running errands in Los Angeles on Thursday afternoon

Kendall accessorized her sporty look with a golden herringbone chain necklace and a pair of dainty gold hoops.

She left her long, brunette hair down and appeared to be wearing little to no makeup as she checked items off her to-do list.

The Kardashians star shielded her sultry stare with a pair of black sunglasses and toted her belongings in a black leather handbag. 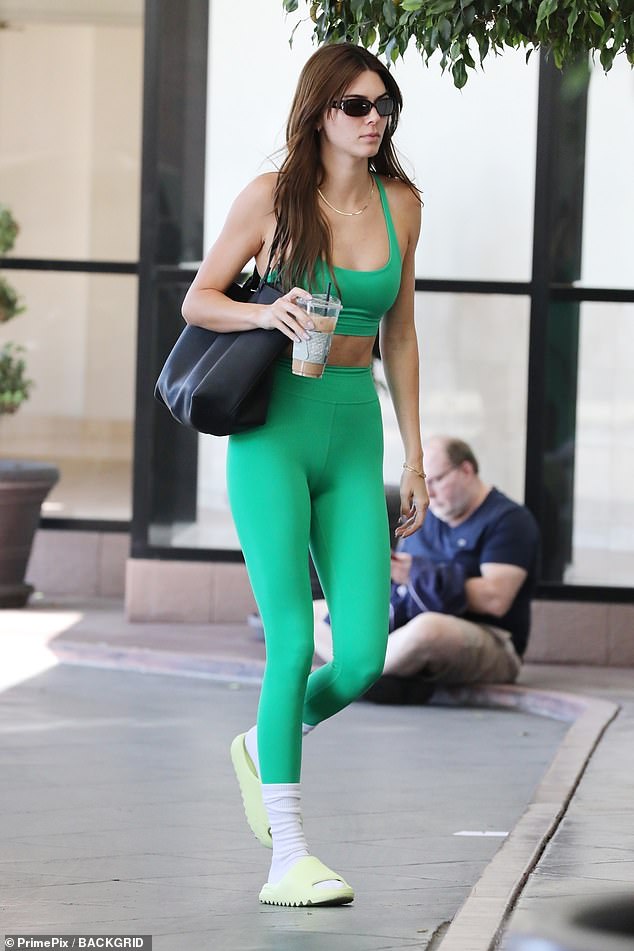 Sporty: The supermodel, 26, rocked a bright green sports bra and a pair of matching skintight leggings that highlighted her toned abs and lean legs. She strolled from place-to-place in a pair of bright white crew socks styled with mint green slide sandals

Later in the day, the catwalk queen was captured layering a white long-sleeve tee over her sports bra while out with a buff security guard.

Kendall’s errand run comes amid the star being mercilessly mocked on social media for her odd technique.

Her less-than-stellar culinary skills were put on full display for the cameras, which soon inspired fans to take to Twitter and Instagram to comment on it.

Ironically, Kendall has made just a handful of appearances on the show’s premiere season – and after the hilarious backlash to her latest on-camera turn, she may well have wished that she’d kept it that way. 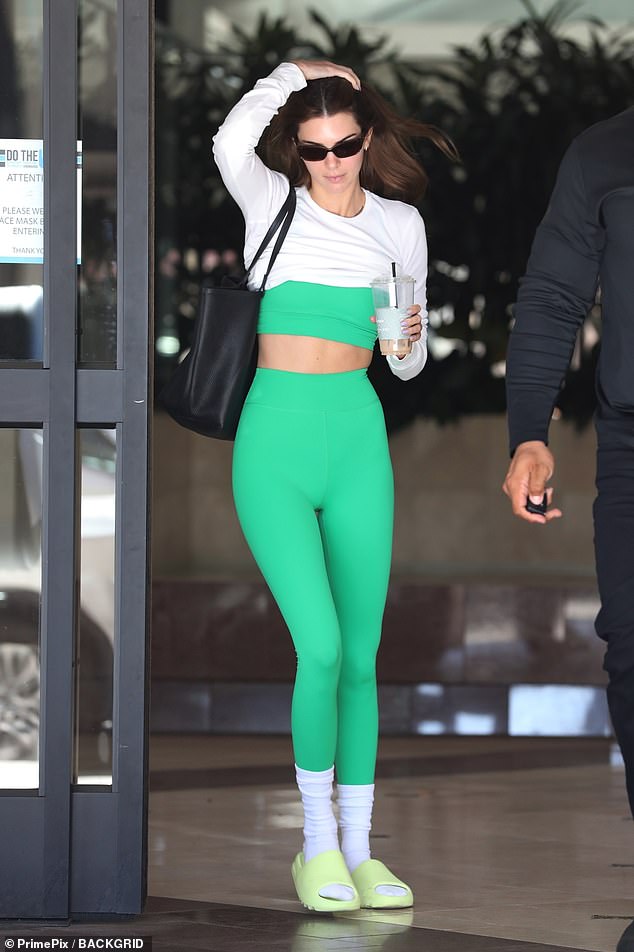 Natural beauty: She left her long, brunette hair down and appeared to be wearing little to no makeup as she checked items off her to-do list 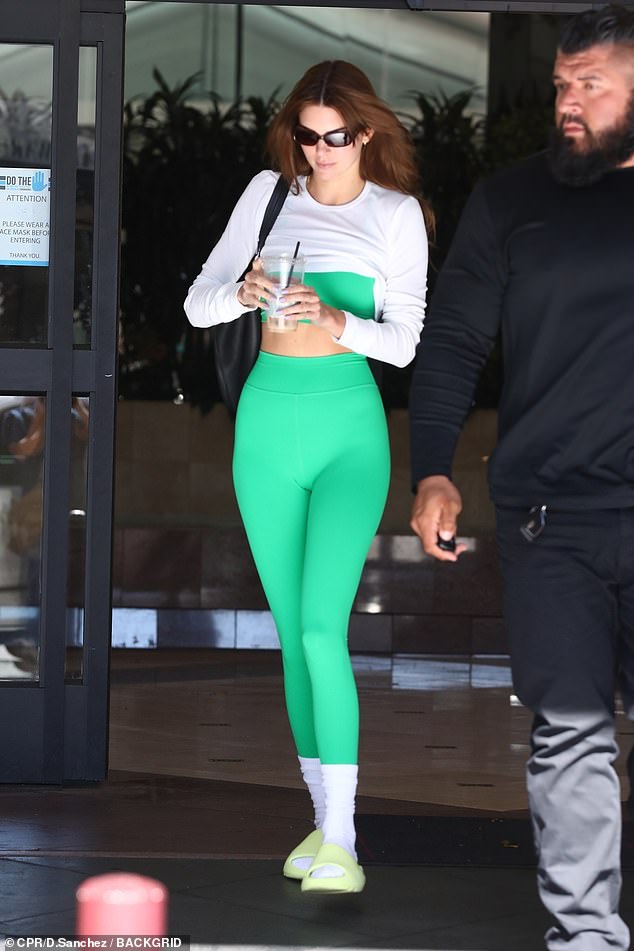 Layering up: Later in the day, the catwalk queen was captured layering a white long-sleeve tee over her sports bra while out with a buff security guard

In the episode, the model and tequila brand owner is seen visiting her momager Kris’ sprawling mansion in Calabasas, Los Angeles, where she decides that she wants to make herself a snack.

Turning down Kris’ offer to have the family’s professional chef whip something up for her – insisting that she’s ‘making it herself’ and that chopping cucumber would be ‘easy’ – Kendall proceeds to try and slice up the fruit, bending her arms around in a very awkward fashion, while her mom looked on in bewilderment.

Soon after Kendall admitted that she was ‘not a good cutter’ and that she was ‘kind of scared’ of the knife, Kris promptly hollered for the chef, asking them to come in and ‘cut this up for her’. 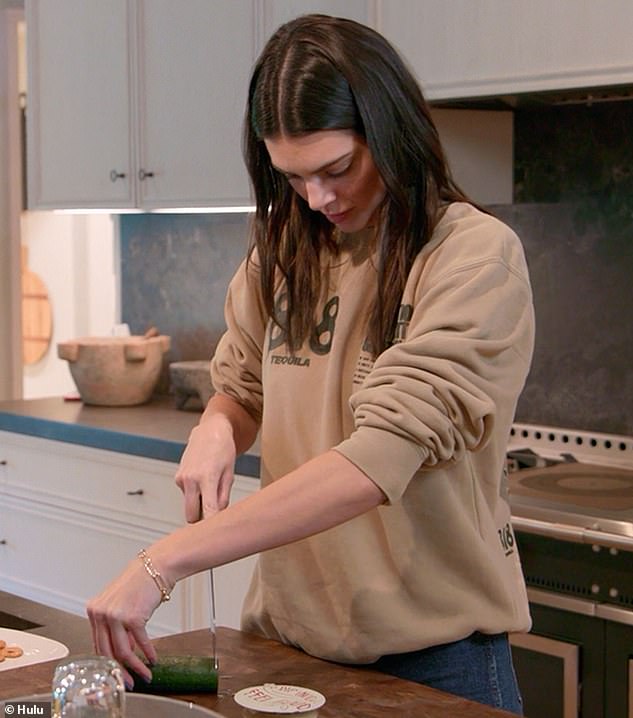 Interesting technique: Kendall’s errand run comes amid the star being mercilessly mocked on social media for her bizarre cucumber cutting technique, which she displayed in the most recent episode of her family’s Hulu show The Kardashians. Her less-than-stellar culinary skills were put on full display for the cameras, which soon inspired fans to take to Twitter and Instagram to comment on it

The hilarious moment has been met with much amusement on social media, where people have been very quick to mock the reality star for her lack of kitchen skills.

‘Kendall Jenner not knowing how to cut a cumber and Kris proceeding to call for the chef is hilarious to me,’ one fan wrote on Twitter, while another added: ‘She probably had to cut her own cucumber 3 times in her life.’

Another wrote ‘ask Hilaria’ in reference to Hilaria Baldwin speaking in a fake Spanish accent and claiming to not know how to pronounce the word cucumber when appearing on national television.

Elsewhere, another fan chimed in: ‘Why did this scene happen? Kris calling the chef to cut it for her but Kendall is such a big girl! She said she’d cut it. Then Scott comes in and Kris says Kendall is cutting a cucumber! Like she’s a 1year old taking her first steps.’ 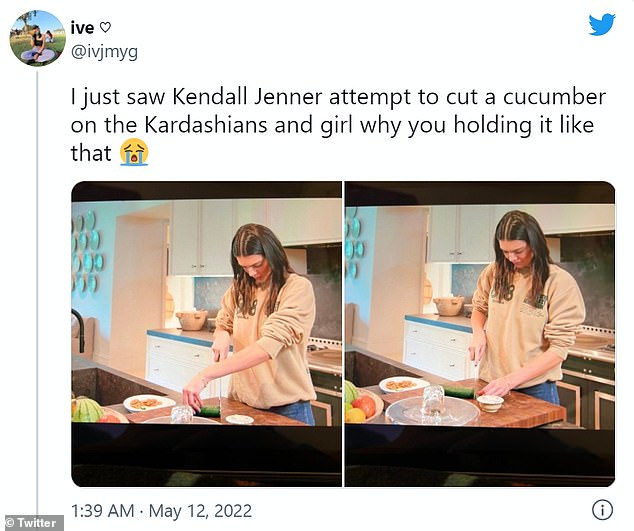 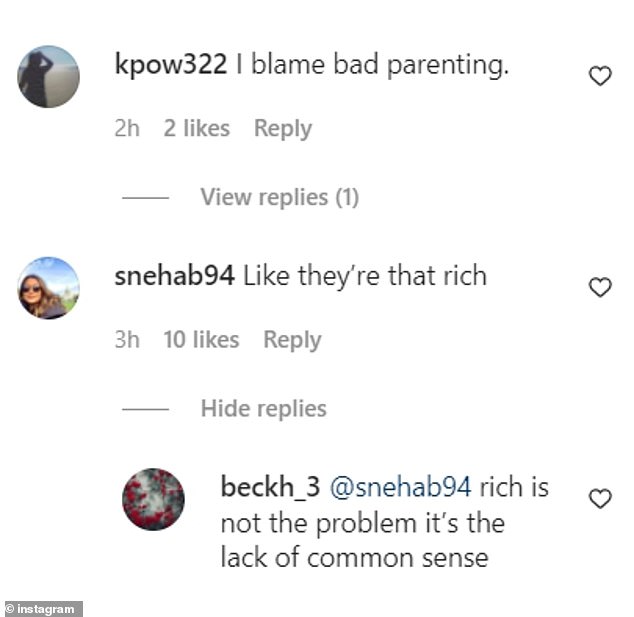 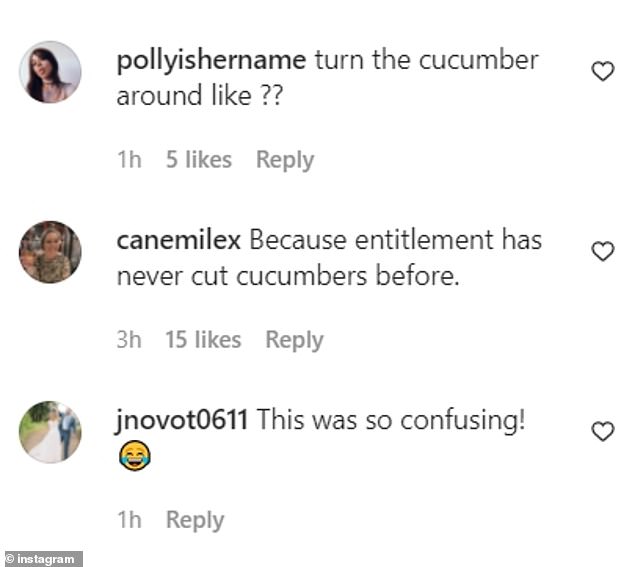 ‘They have no life skills!’ Kendall Jenner is savagely mocked online or being unable to cut a cucumber… after momager Kris has to call out for a chef

‘Anytime you feel like you’re bad at doing something, watch kendall jenner chop a cucumber,’ another fan joked.

Hilariously, one Twitter user said: ‘About an hour ago, I witnessed Kendall Jenner attempt to cut a cucumber on my tv screen. It made me feel a little superior but mostly poor.’

‘Watching Kendall Jenner try to cut a cucumber was shocking and yet… not surprising they have no life skills,’ another fan said.

The Kardashians premiered last month on Hulu, with episodes airing Thursdays at midnight.

It marked the Kardashian-Jenner family’s return to TV following the end of their long-running reality series Keeping Up With The Kardashians in June 2021. 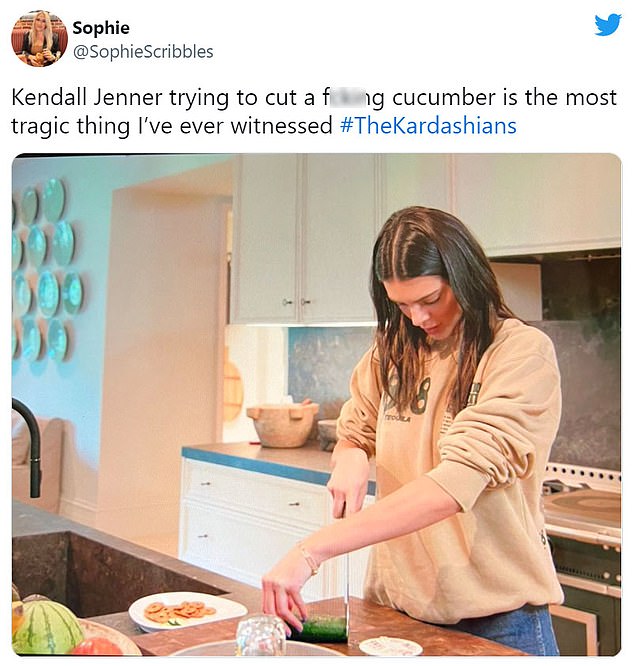 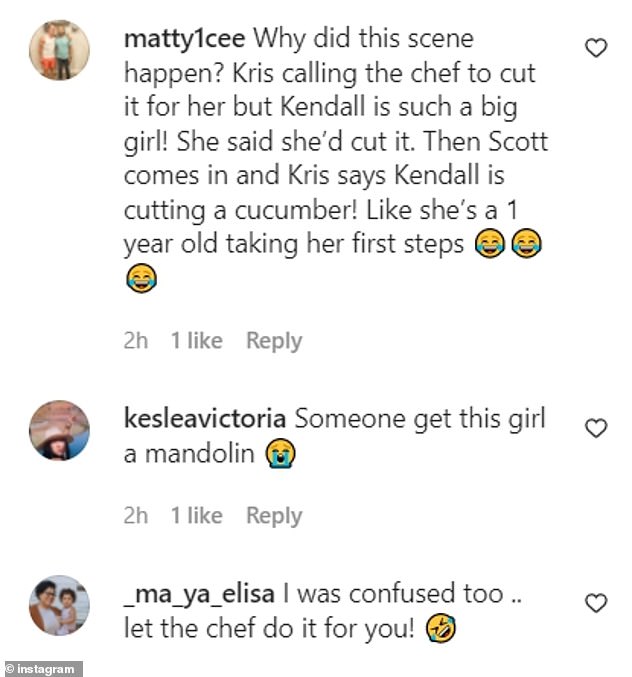