Khloe Kardashian showcased her lithe legs as she boarded a boat in the Italian village of Portofino on Saturday, the day before her sister Kourtney is set to wed Travis Barker.

The reality star, 37, looked sensational as she strutted about the harbour in a thigh-skimming chocolate brown mini dress with statement knee high boots.

Her show-stopping ensemble featured a low-cut bardot neckline with and underbust cut-out as it hugged her famous curves. 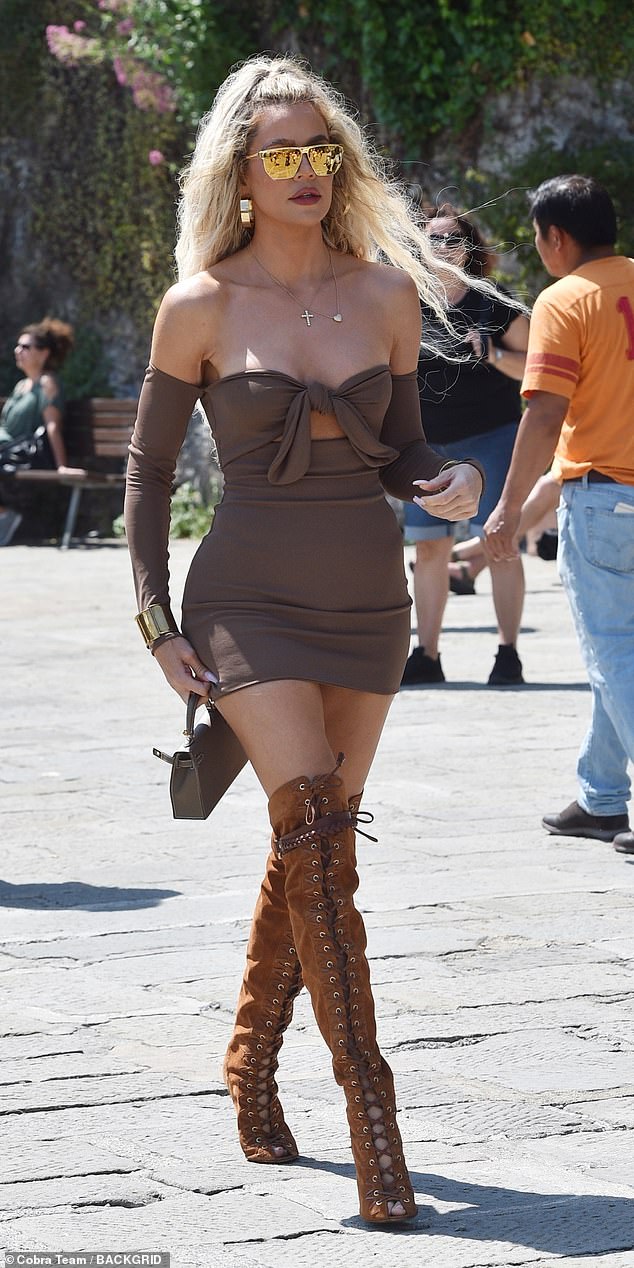 Strut: Khloe Kardashian, 37, displayed her lithe legs in a thigh-skimming mini dress and knee high boots ahead of her sister Kourtney’s Italian wedding to Travis Barker on Saturday

Khloe boosted her height in the tan suede boots that laced all the way up her legs with a leather tie.

She wore her bright blonde locks in a half-up half-down hairstyle, worn in beachy waves and shielded her eyes with reflective sunglasses.

To complete her look, Khloe carried a miniature light brown handbag and added a pair of chunky gold earrings and matching cuff bangles. 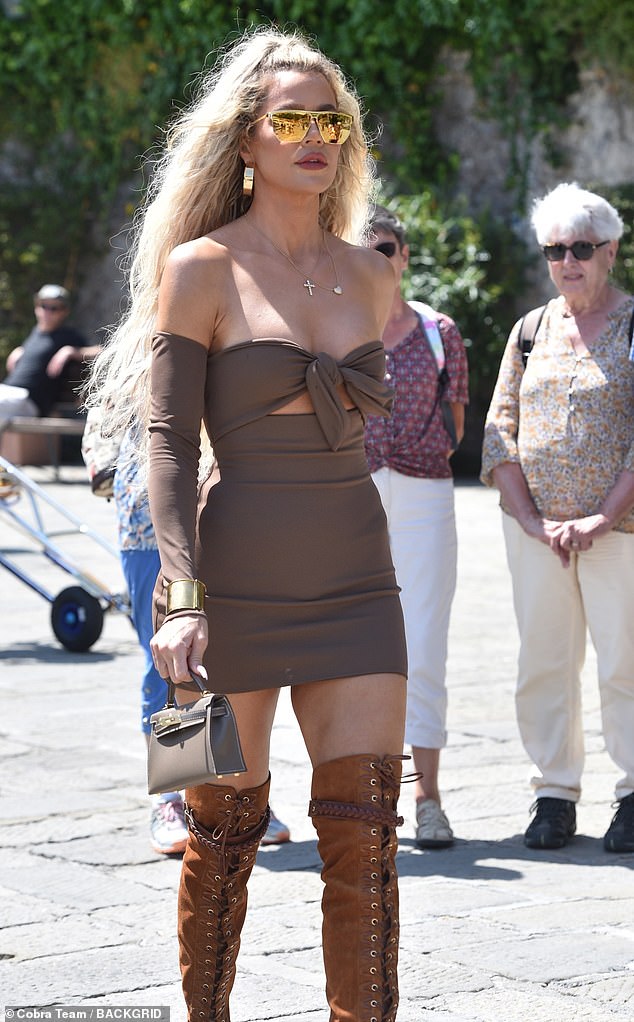 Sensational: Her show-stopping ensemble featured a low-cut bardot neckline with and underbust cut-out as it hugged her famous curves

Khloe was joined by her younger sister, Kylie, 24, and her daughter, Stormi, as the famous family took to the water in a yacht.

The makeup mogul slipped into a stunning floral printed dress whilst Stomri, who she shares with Travis Scott, was dressed in a white Dolce and Gabbana ensemble.

Stepping on the boat, they were joined by the rest of their family, including Kris Jenner and the bride-to-be Kourtney. 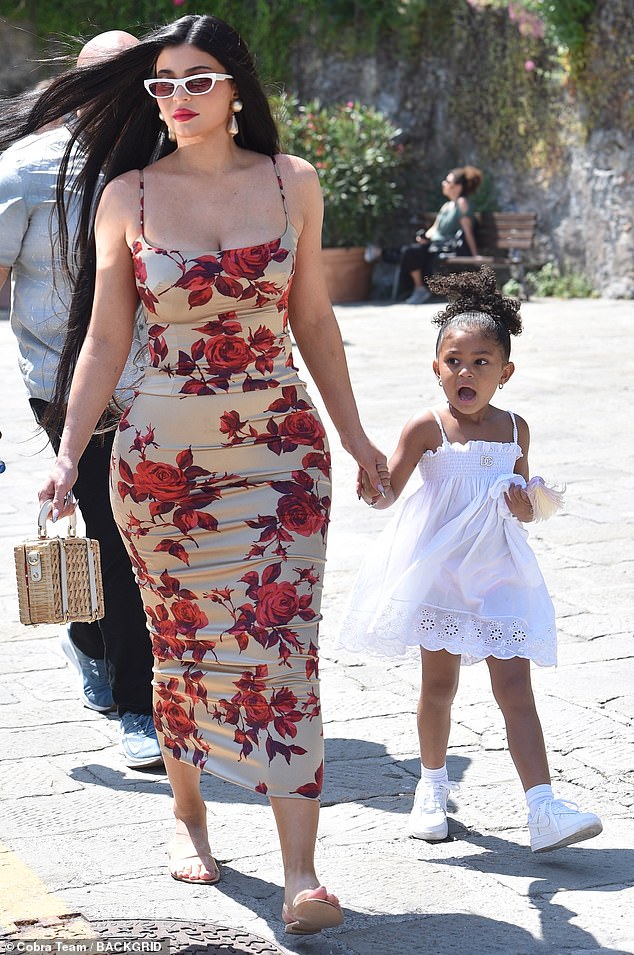 Family affair: Khloe was joined by her younger sister, Kylie, 24, and her daughter, Stormi, as the famous family took to the water in a yacht

The intimate wedding of Kourtney and Travis is due to be held tomorrow on the secluded terrace of a medieval castle, MailOnline can reveal.

Final preparations were today underway to prepare the romantic venue behind the high walls of the ancient Castello Brown fortress in the Italian village of Portofino.

Staff have been sworn to secrecy and made to sign legal agreements, forbidding them from talking about the wedding, which has been billed as the showbiz event of the year.

The ceremony was widely tipped to take place sometime this weekend, but we can exclusively reveal that guests will gather tomorrow to watch the couple tie the knot. 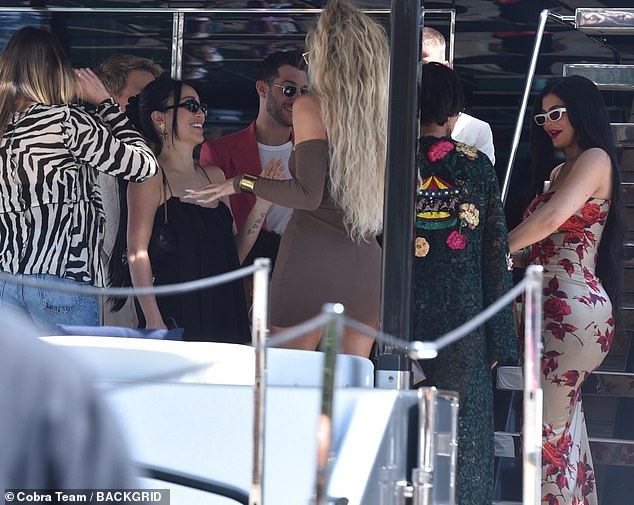 Fun-filled: Stepping on the boat, they were joined by the rest of their family, including Kris Jenner and the bride-to-be Kourtney

The castle which was once used as a stop off point for Richard the Lionheart on his way to the Crusades normally operates as a museum for tourists.

But the entire building on a hilltop overlooking the historic seaside village near Genoa has been sealed off since last Wednesday after the Kardashians hired it for a week.

A steep path leading up to the castle from Portofino harbour has remained open so that locals and visitors can still access the rocky coastline on the seaward side of the fortress. 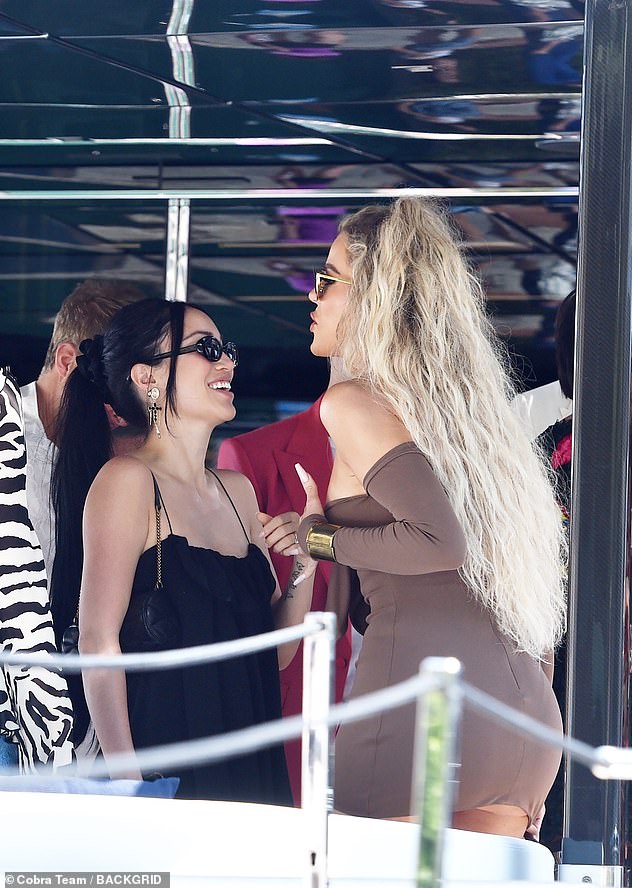 Sisters: The intimate wedding of Kourtney and Travis is due to be held tomorrow on the secluded terrace of a medieval castle, MailOnline can reveal

But signs have now gone up saying that the path will be closed on Sunday and re-opened on Monday in an apparent measure to guarantee privacy for wedding guests.

Kourtney and Blink-182 drummer Travis are believed to be staying on the 213ft superyacht Regina D’Italia which is moored just offshore from the tourist hotspot fishing village.

It is believed that the couple will be ferried to their wedding venue by tender boat, arriving at a small private jetty on the secluded cove at the rear of the castle.

They’re saying ‘I do’ for a third time this weekend in Portofino, Italy in front of a close circle of family and friends. Here, DailyMail.com takes a look back at the three weddings, wild PDAs, IVF struggles and whirlwind romance of Kourtney Kardashian and Travis Barker…

Having been a friend of the family for years, Travis Barker first showed his interest in the KarJenner clan when he confessed to first being attracted to Kim Kardashian – not Kourtney – back when she was an assistant to Paris Hilton around 2006.

‘How could you not stare at Kim? Mind you, I enjoyed hanging out with Paris, but I love curvy girls,’ Travis admitted in 2015. ‘Kim was eye candy. I was no way disrespectful to Paris, but I couldn’t keep my eyes off Kim!’

Travis went on to say he spent time with Kim in their Calabasas neighborhood and while he had a ‘crush’ on her, he said ‘nothing ever happened.’

Eyes for someone else? Travis is seen looking away in a 2018 flashback photo that Kourtney recently posted

Getting to know the family

Travis then made several appearances on Keeping Up with the Kardashians while he was still married to ex-wife Shanna Moakler, cementing his status as a true Kardashian family friend.

His daughter Alabama revealed in October 2017 that she had been bonding with the Kardashians, along with her father, though she did not specifically mention Kourtney.

‘Actually, the other night I had dinner with all of them and they were really sweet,’ she said at the time. Travis shares Alabama and a son Landon with his ex Moakler, who he was married to from 2004 to 2008.

A look of love? Travis is seen in an old episode of Keeping Up with the Kardashians

Kourtney and Travis first sparked romance rumors when they were spotted on what appeared to be a date together in 2018 Los Angeles.

For their evening out, the duo attended an evening service at the famed celebrity Hillsong Church, and then later went out for a vegan dinner at Crossroads where they dined with Kourtney’s pal Larsa Pippen.

At the time, Kourtney had broken up with French model Younes Bendjima just a few months before.

Getting close: Kourtney and Travis are spotted out together in 2018 heading for dinner

From friends to lovers

Their relationship was confirmed in January 2021 after growing closer during the pandemic, as Kourtney recently revealed she made the first move while the pair were enjoying a friendly movie night together.

‘I was definitely always attracted to Travis. I think it was just the right time in my life,’ she said on the show this year, adding: ‘We were texting and I put it out there, like flirtatious conversation.’

After Travis failed to make a move and went to put on a second movie for them to watch, Kourtney took action: ‘I was like, “I don’t have time for this movie marathon,’” so I made the first move.’

Getting closer: The pair are seen together in another episode of KUWTK

‘Kravis’ became Instagram official for Valentines in February 2021 with Kourtney posting a picture of the pair holding hands, but that was just the start of the wild PDAs that followed. By April, Travis posted a blurry snap of them making out, while they later revealed their signature move on Kourtney straddling the Blink 182 drummer in the Utah desert.

Their PDAs reached a fever pitch in August last year, when Scott Disick reached out to her ex Younes Bendjima on Instagram after seeing Kourtney straddle Travis on a gondola. He later apologized.

They made their red carpet debut at the VMAs in September last year, and their display of tongue-kissing for the cameras set the tone for many more PDA-heavy events including this year’s Met Gala.

Wow! Kourtney and Travis show off their signature straddle pose in Utah

The first of many: Kravis made their red carpet debut at the MTV VMAs in September last year

While the couple’s romance has seen many highs, Kourtney has revealed they’ve also faced heartbreak as she’s struggled to have a child with Travis.

In an episode of the Kardashians, Kourt confessed their doctor had taken them down ‘this road of doing IVF’ saying ‘it hasn’t been the most amazing experience.’

The reality star is mother to Mason, 12; Penelope, nine; and Reign, seven — with her former partner Scott Disick, whom she dated from 2005 until 2015.

Travis popped the question in October to Kourtney, whisking her away to a beach in Montecito, California, as the special moment was captured for the Kardashians Hulu reality show.

Later, it was revealed there was drama as Kris Jenner made the call not to include Kourtney’s children in the happy moment – which resulted in her daughter Penelope becoming upset.

‘I woke up all night thinking it was a dream,’ Kourtney gushed on Instagram at the time.

‘I woke up all night thinking it was a dream,’ Kourtney penned on Instagram about her proposal from Travis

Not content with just one ceremony, Kravis kicked things off with a drunken Las Vegas wedding in April this year after partying at the Grammy Awards. But the wedding was void as it was revealed the loved-up couple did not have the correct paperwork.

In the run up to their big wedding in Italy, Kravis legally tied the knot in Santa Barbara in May with her grandmother Mary Jo “MJ” Campbell present, as well as Travis’ father Randy Barker. The pair drove off in a vintage lowrider convertible with a ‘Just Married’ sign.

However, the couple really pulled out the stops for their big bash in Portofino renting out an entire castle for their family and friends. The pair chose the historic house museum Castello Brown located on a hill above Portofino harbour for their official big celebration.

First wedding: Kravis tied the knot in Vegas, though it was not legally binding

Second: They officially got hitched in Santa Barbara in May with her grandmother Mary Jo “MJ” Campbell present