Smoldering half-sisters Kim Kardashian and Kylie Jenner flaunt their enhanced curves in string bikinis by the pool: ‘As we should’

Kim Kardashian and Kylie Jenner know that some things are better together, whether its beauty collaborations or even just a little rest and relaxation.

And on Saturday the 40-year-old reality star and her 23-year-old makeup mogul half sister leveraged their joint star power for a sunbathing photo shoot by Kris Jenner’s Palm Springs pool.

Rocking similar string bikinis and flaunting nearly identical curves, Kylie self-assuredly wrote ‘as we should,’ of their choice to share the tantalizing snaps with their combined 437M followers. 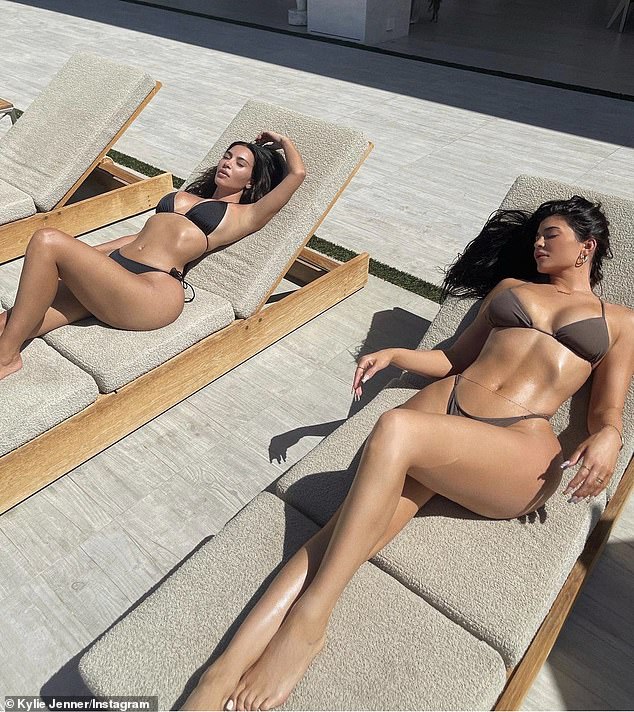 ‘As we should’: Kylie Jenner and Kim Kardashian leverage their star power in a sizzling bikini shoot while reclining by mom Kris Jenner’s pool in Palm Springs

The SKIMS founder has had a stressful few months between her quest to become a lawyer and her divorce from Kanye West.

She looked at ease to get a little sun and not be on mommy duty as she reclined in a black string bikini.

By her side was her equally famous sister who opted for a shade of brown when it came to her bikini.

Kylie showed off her hard earned figure after putting in overtime at her home gym, and adorned her impossible proportions with a belly chain. 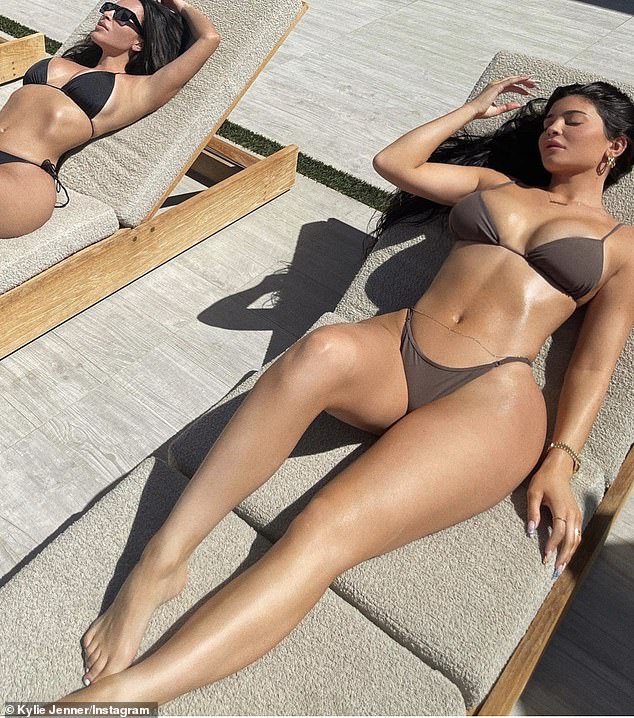 Soaring temperatures: The ladies looked hotter than scorching Palm Springs temperatures as they teased their followers 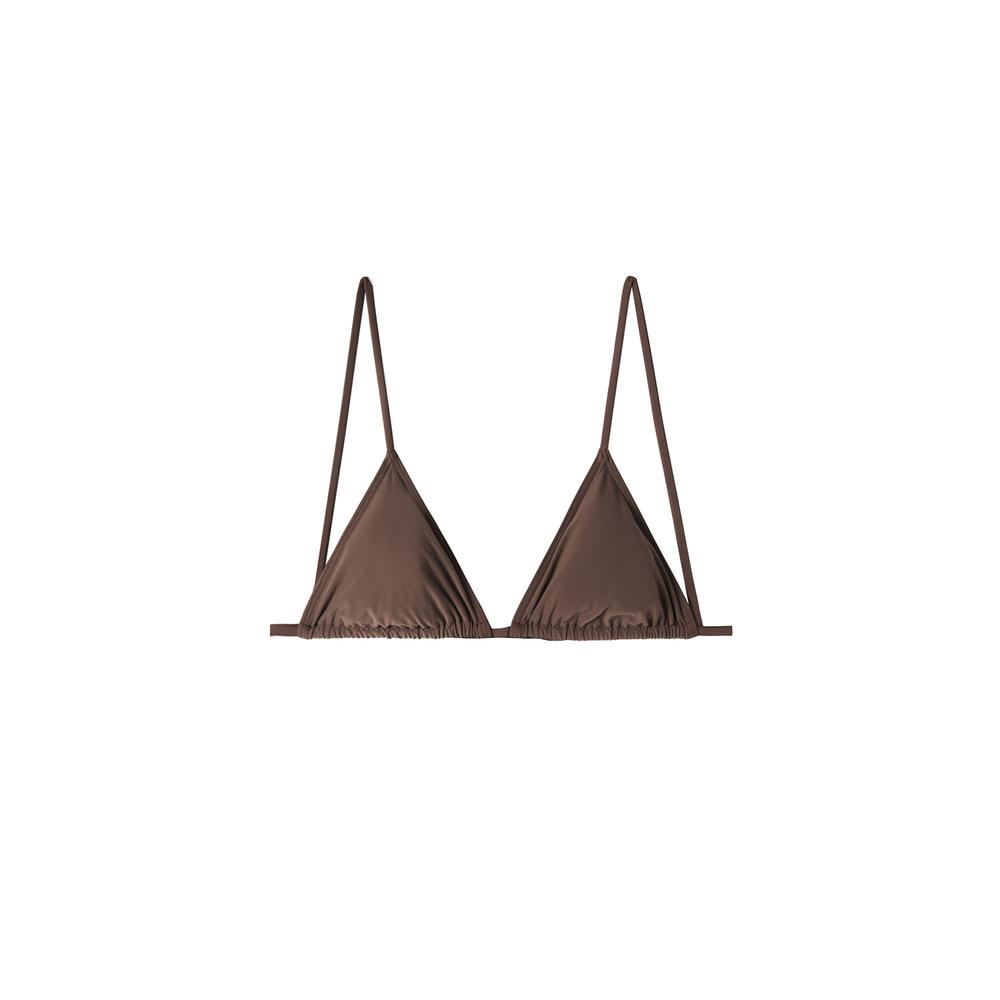 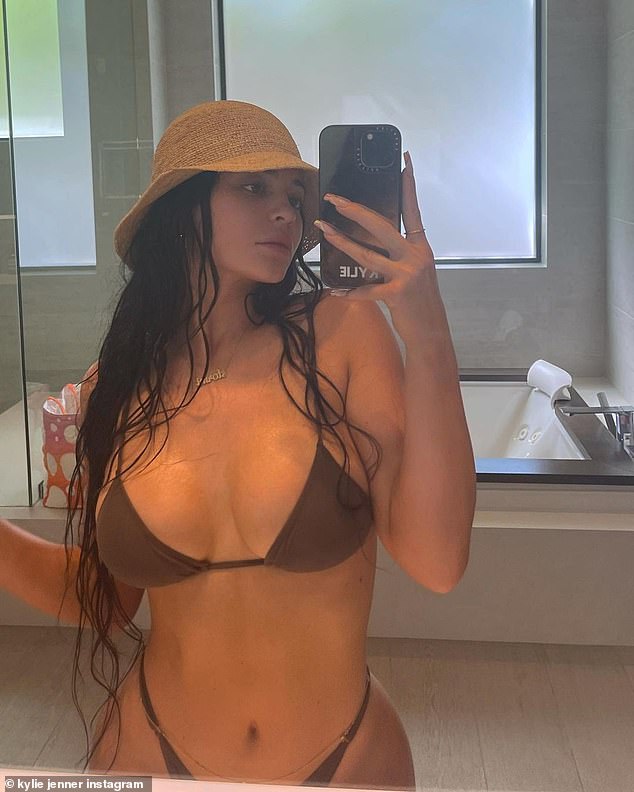 Natural beauty: Kylie posed before her bathroom mirror in a chic woven hat 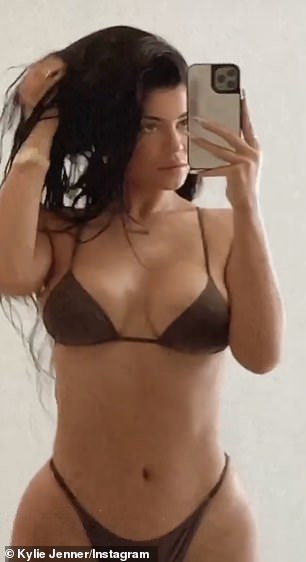 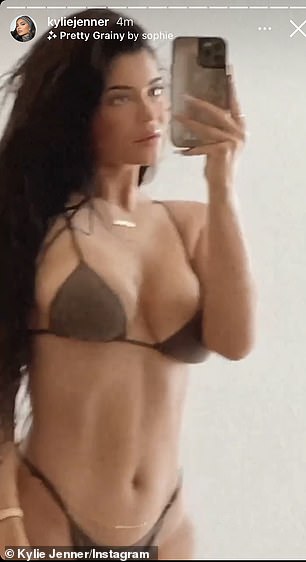 Showing off: Kylie gave her followers a close up look at her figure as she shot a video in her high rise bikini 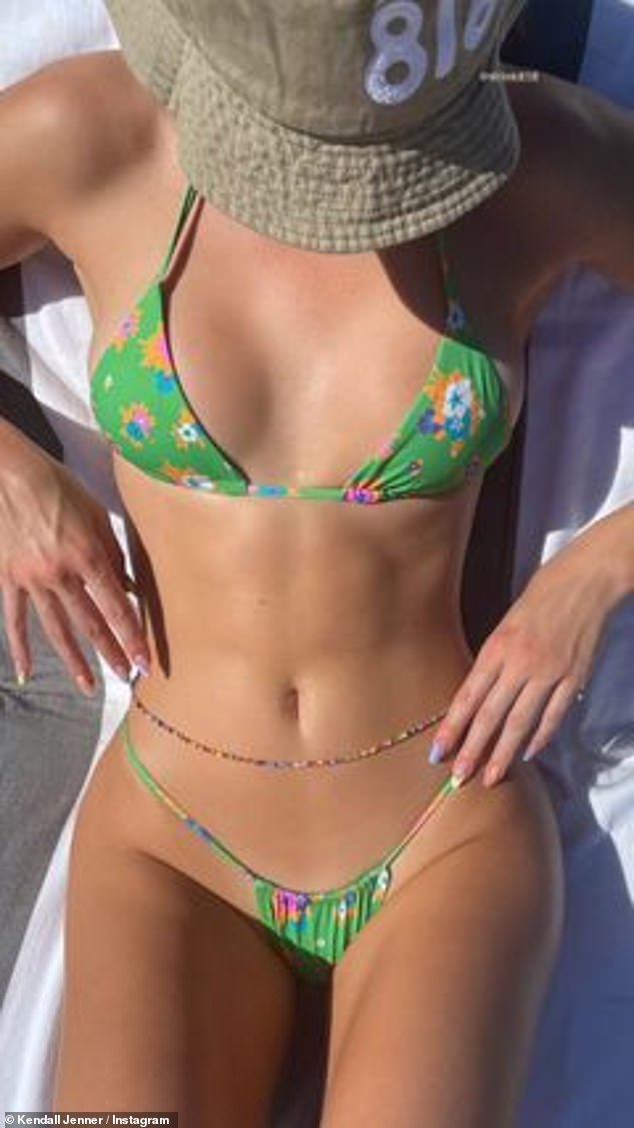 Kendall: The supermodel had also taken to the lounge chairs for a little sun 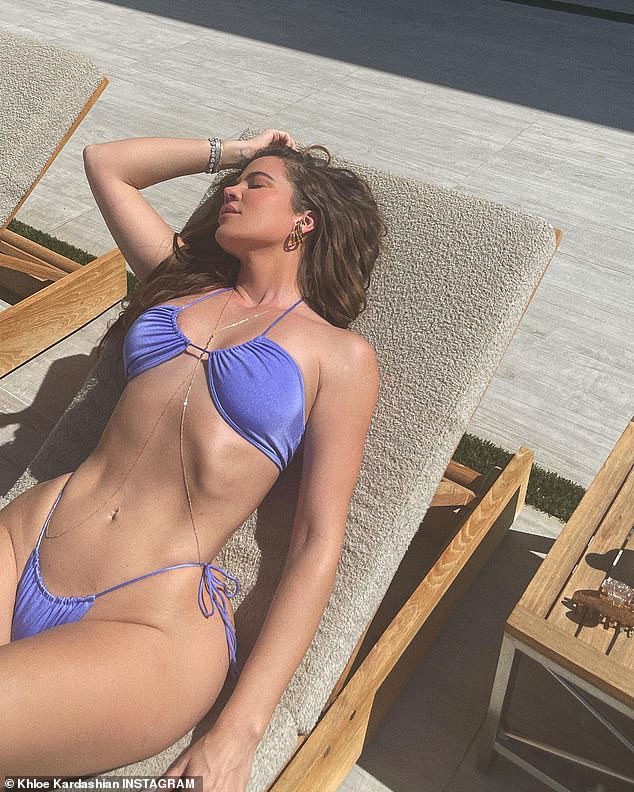 Family affair: And Khloe showed off her hard earned figure by the pool on Friday 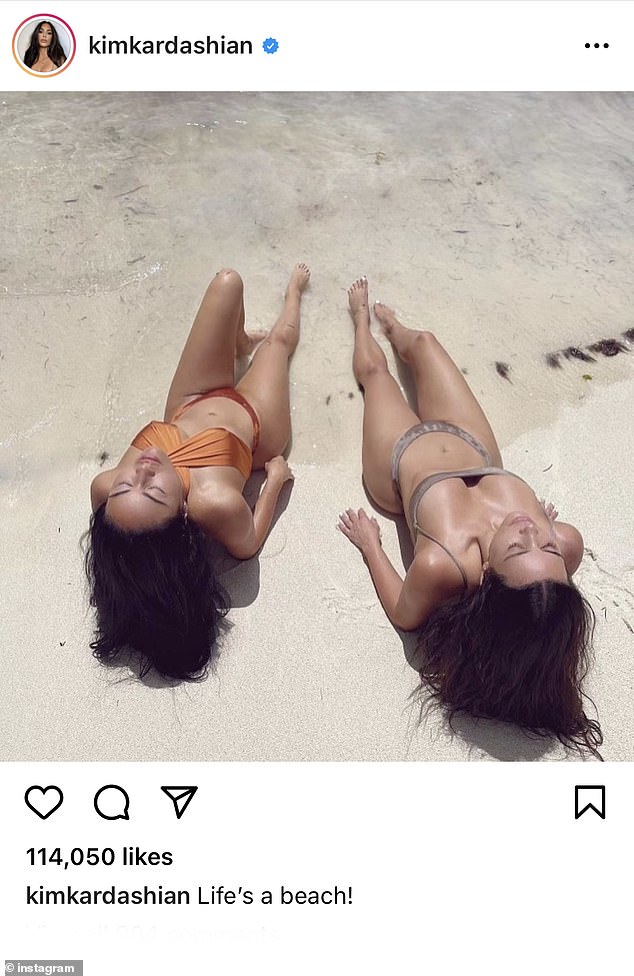 Throwback: The KKW Beauty founder enjoyed a vacation this week which she called her ‘Spring Break’

She seductively flicked her hair and left her mouth slightly ajar while working her angles.

And later Kylie gave her followers a close up look at her figure as she shot a video in her high rise bikini.

Additionally both Khloe and Kendall have taken to the same lounge chairs to show off their figure in recent days.

Ahead of Easter Sunday momager Kris pulled out all the stops while hosting her brood of daughters and their kids, with pastel colored treats and other themed accoutrements. 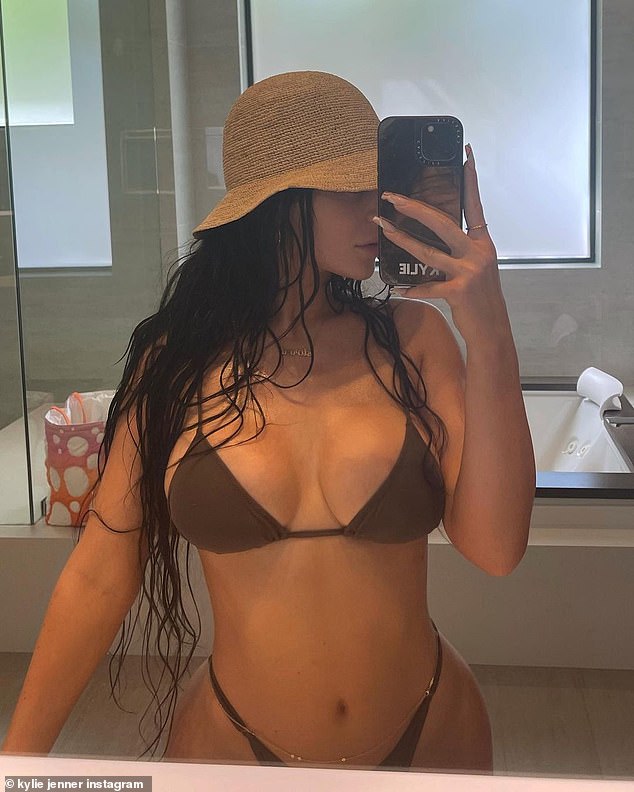 Bikini babe: Kylie was clearly loving her barely-there suit, which was accessorized with a gold body chain 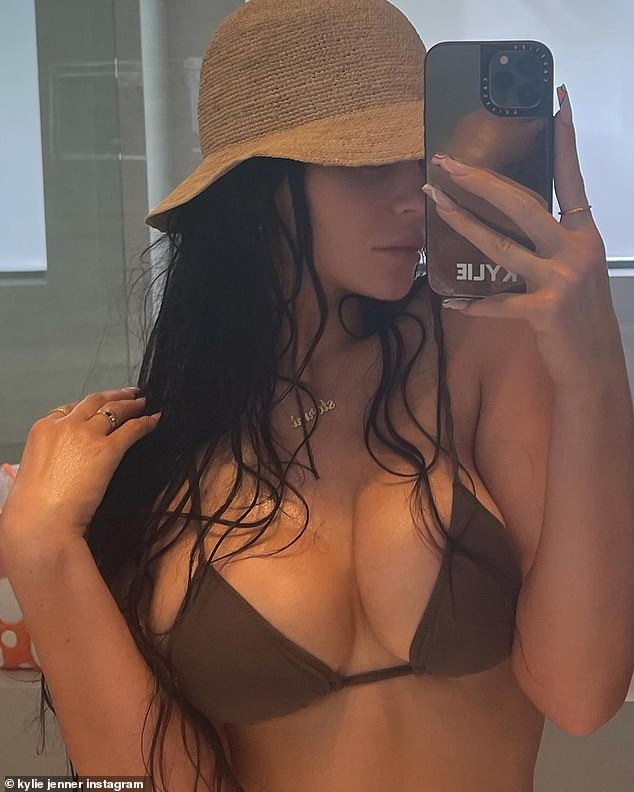 Represent: As she posed for her mirror snaps, Kylie flashed her Kylie Cosmetics phone case 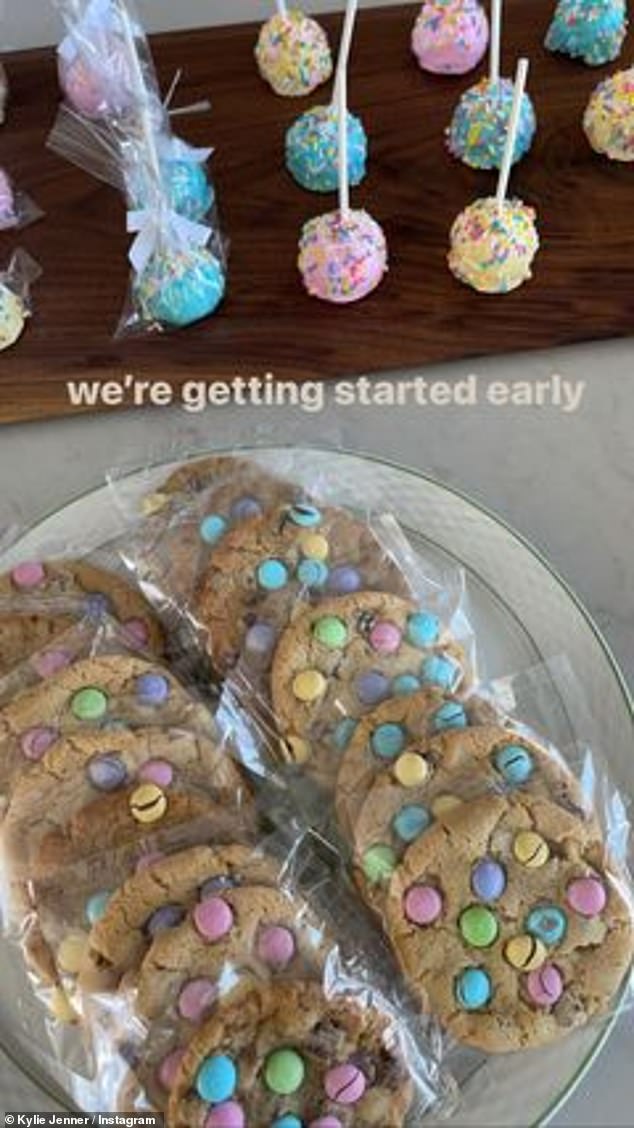 All the sisters were in attendance for the weekend with the exception of Kourtney who is in Utah with her ‘boyfriend’ Travis Barker and their kids.

The Poosh founder indeed confirmed the seriousness of their relationship in a TikTok video with Barker’s daughter Alabama, where she lovingly gave him the title on Friday.

Among the complexities of the family’s romantic lives, all the sisters are in different places with regards to their relationships — Kim’s divorce from West after seven years of marriage perhaps the most shocking despite its ups and downs.

Kendall has endured a quiet romance with NBA player Devin Booker since last spring and Kylie is reportedly not romantically involved with baby daddy Travis Scott but they continue to co-parent and spend time together. 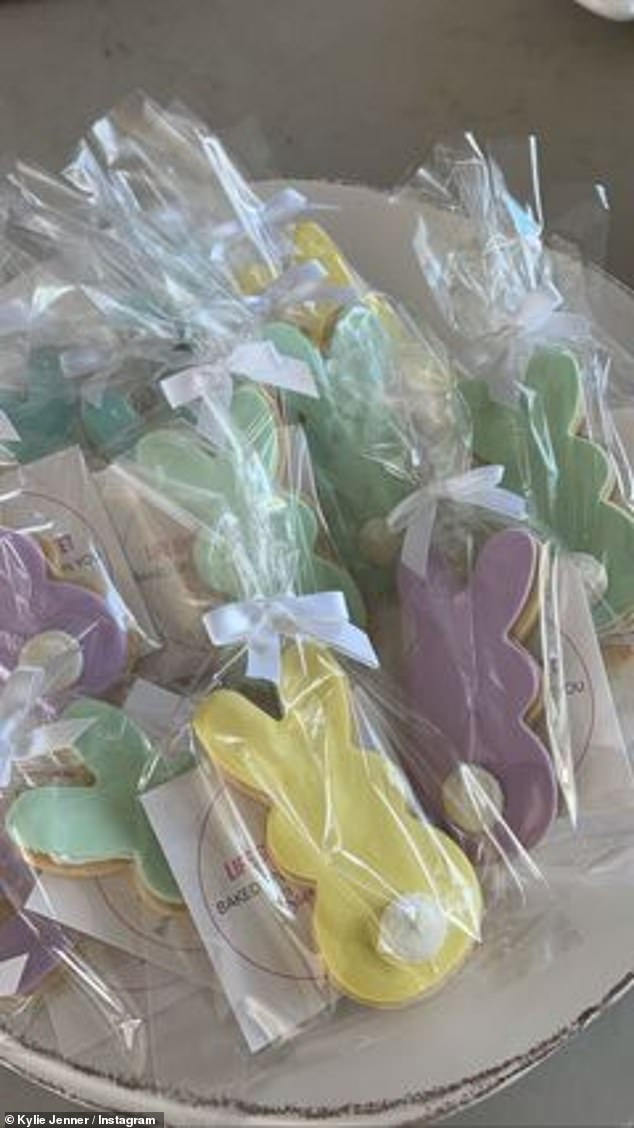 Sweet treats: Making the holiday special for their brood of young ones they decorated cookies and cakes 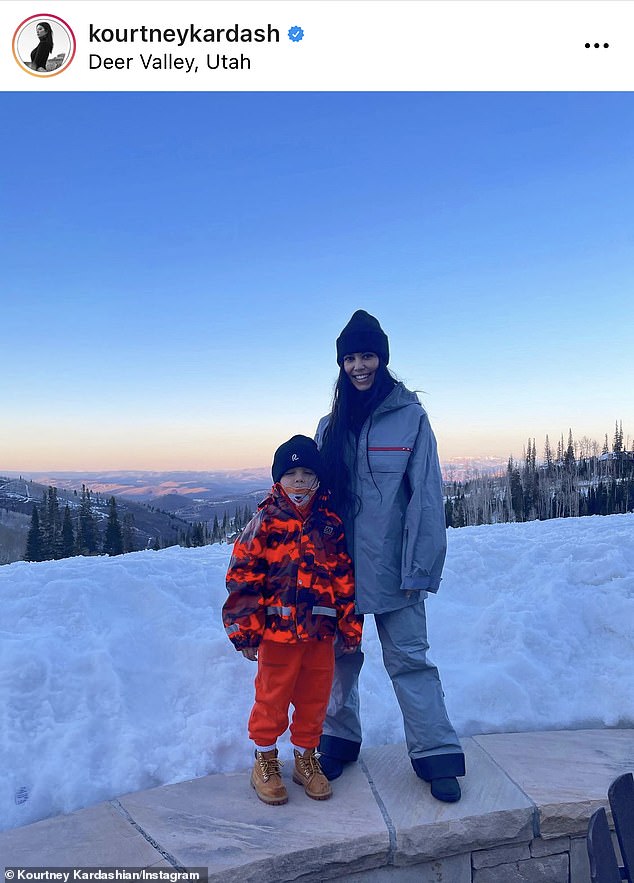 Romantic escape: She and Barker are celebrating Easter together in Utah with their kids 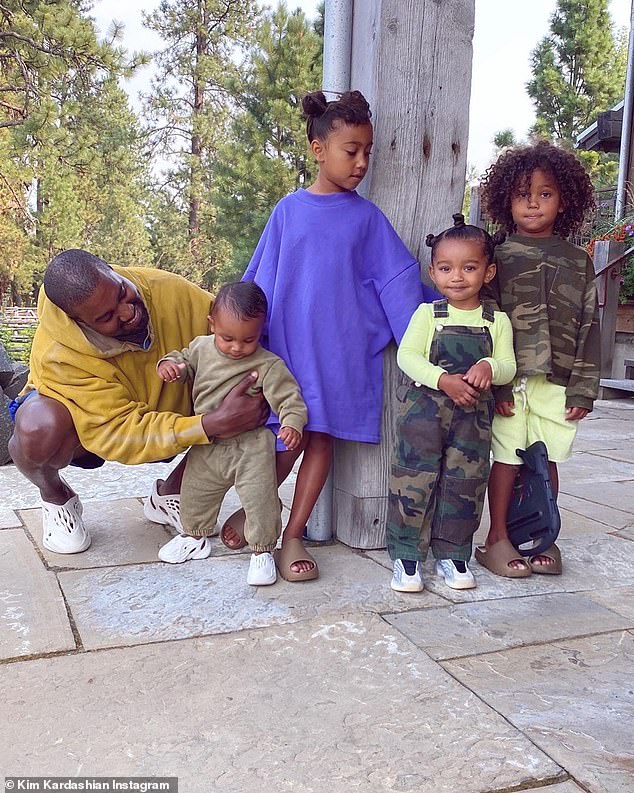 Dad mode: Amid Kim’s split from Kanye it is unclear if he has seen their four kids but she filed for joint legal and physical custody 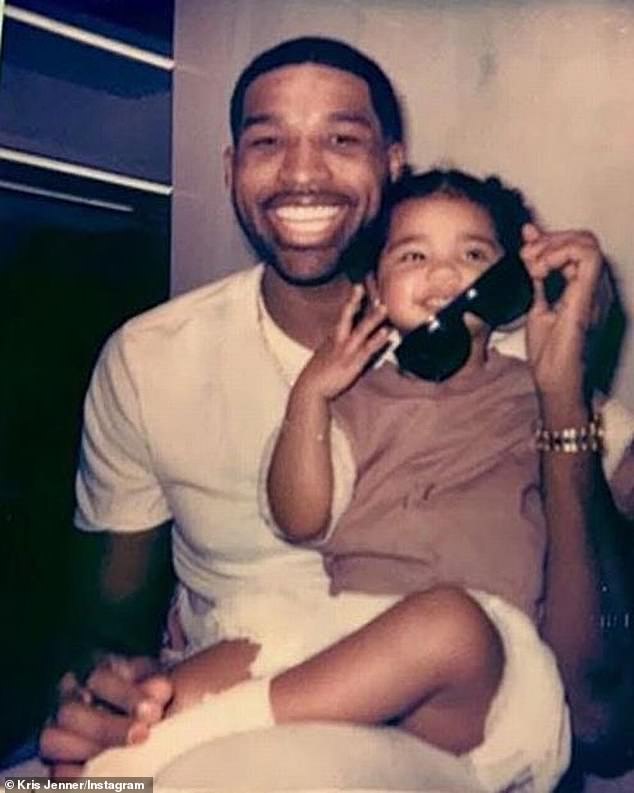 Doting dad: Khloe seemed to confirm she and Tristan had rekindled romantically in March and she has been open about their journey to have more kids 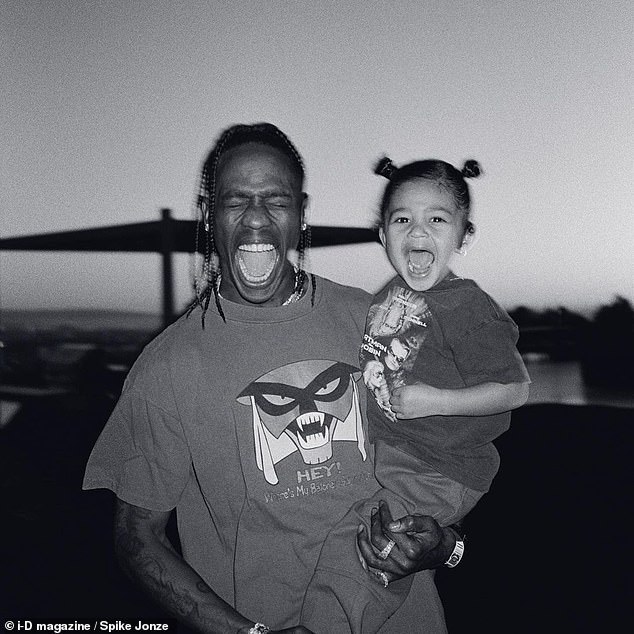 Stormi: The Goosebumps rapper rings in many of the holidays with the Kardashian clan on account of he and Kylie’s daughter Stormi

And Khloe’s love life has been a topic on everyone’s lips after she seemed to confirm she and former cheater Tristan Thompson were back together on his birthday with a gushing tribute.

It is unclear which of the girls’ beaus are in attendance for the holiday amid the ongoing Covid-19 pandemic, but it can be assumed that the Goosebumps rapper is there to celebrate with Stormi, three, being based in LA and West will not be there.

Additionally Tristan is back in Boston as the Celtics prepare to face off against the Hornets on Sunday.

A continued behind the scenes look at their love lives continues to unfold on the family’s hit show Keeping Up With The Kardashians. 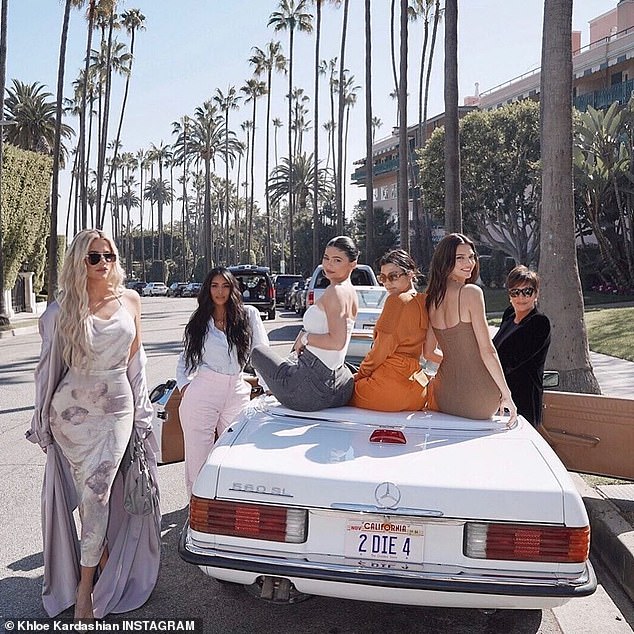 Sisters: Among the complexities of the family’s romantic lives, all the sisters are in different places with regards to their relationships