Kim Kardashian is 'upset' with Kanye West for airing out drama

Kim Kardashian is surprised and upset by the claims her estranged husband Kanye West has made about their co-parenting equation.

In preview clips for a new Hollywood Unlocked interview Kanye, 44, alleged that Kim’s security recently barred him from entering her house.

‘Despite the many false things he says in the interview, its true that he was not allowed in when he showed up at the home recently,’ a source close to the situation told DailyMail.com. ‘And that’s only because she has set boundaries around his ability to enter the home at any time he wants after several incidents.’ 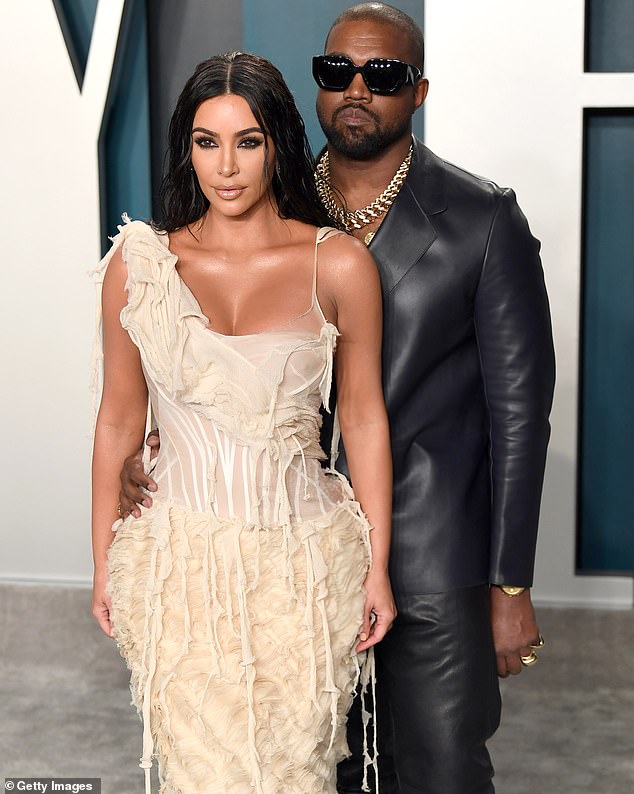 The way they were: Kim Kardashian is surprised and upset by the claims her estranged husband Kanye West has made about their co-parenting equation; pictured in 2020

The insider added: ‘However, security didn’t stop him from seeing the kids, picking them up or dropping them off. He just can no longer walk inside her home without her permission. She has a right to privacy and is trying to set healthy boundaries.’

Kim’s boundaries, according to the source, ‘became necessary because there have been several incidents where her family, friends and staff have been left upset by his recent unannounced visits.’

Further, the source said: ‘She wants the children to have a strong relationship with both parents and for him to respect the boundaries and structure she has put in place for them to have some predictability and consistency with their schedule.’

The insider explained: ‘Kim doesn’t want the drama. She wishes he would keep all of this private,’ adding: ‘She’s upset that he’s chosen to go this route.’ 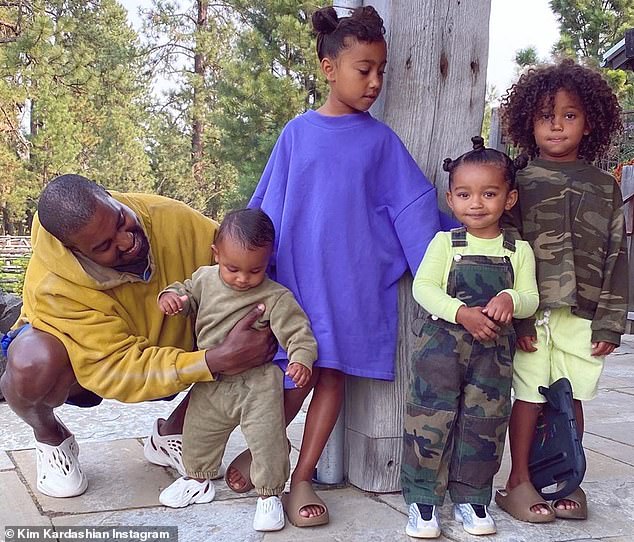 According to the source: ‘Her goal has always been to protect the children – and Kanye when they were together. She’s never talked openly about their business or issues and always takes the high road. She has always been very protective of him.’

The insider noted: ‘She has never not let him see the kids and he can see them whenever he wants. He chooses when he wants to see them – and he also chose not to see them over the holiday.’

Kanye spent New Year’s Eve partying in Miami, where he met Uncut Gems actress Julia Fox, who has since become his girlfriend. Kim, meanwhile, saw in the new year in California with the children.

‘The kids need structure. [Kim] wants the children to have a strong relationship with both parents,’ the source close to the situation said. 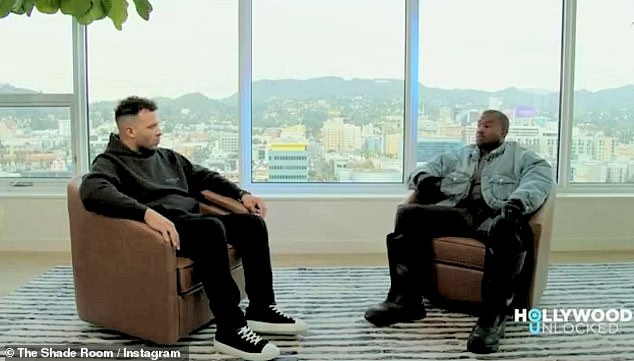 Allegations: In preview clips for a new Hollywood Unlocked interview Kanye, 44, alleged that Kim’s security recently barred him from entering her house

‘There are no issues and this interview is all news to her. They have been co parenting productively. And for the health of the kids this false narrative is hurtful.’

With regard to Kanye’s claim that Kim’s ‘new boyfriend’ Pete Davidson was inside the house when security turned him away, the insider said: ‘Pete has not met the kids and he also has not been to her home.’

Kim filed for divorce in February of last year after months of rumors that her marriage to Kanye was on the verge of collapse. 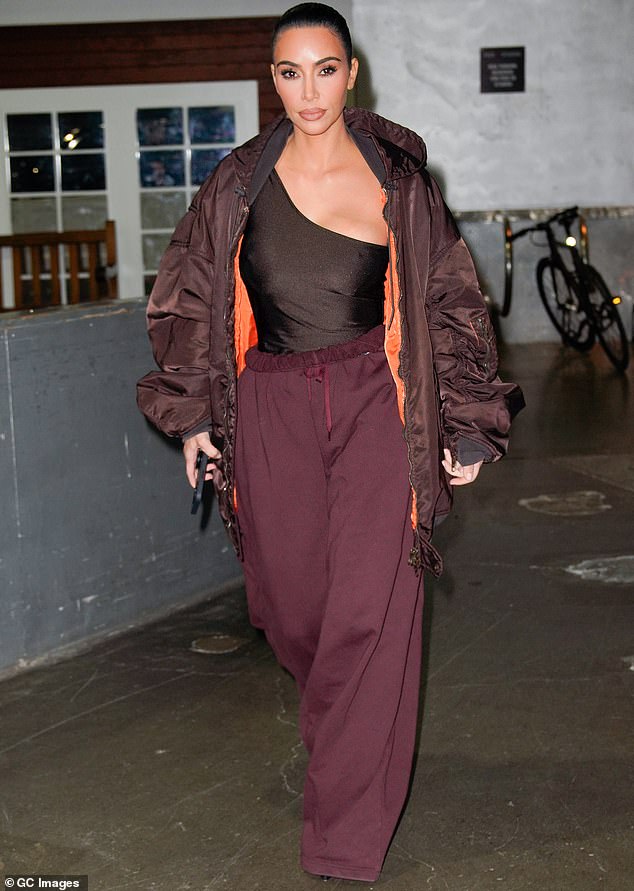 Co-parent: A source close to the situation said Kim ‘has never not let him see the kids and he can see them whenever he wants’; pictured in November in New York

Since their separation Kim has managed to keep the couple’s former marital home in Hidden Hills – but last month, two weeks after she filed to be declared legally single, Kanye bought a $4.5 million house across the street from her.

Kanye is said to have paid $421,000 more than the asking price on his new house to make absolutely certain nobody outbid him.

In an extended clip of the Hollywood Unlocked interview obtained by Entertainment Tonight, Kanye explained why he bought the home, declaring: ‘Ain’t no security gonna get in between me and my children and you ain’t gonna gaslight me.’

He accused Kim’s guards of having ‘stopped me at the gate’ and said that her ‘new boyfriend’ – presumably Pete Davidson – was in the house at the time. 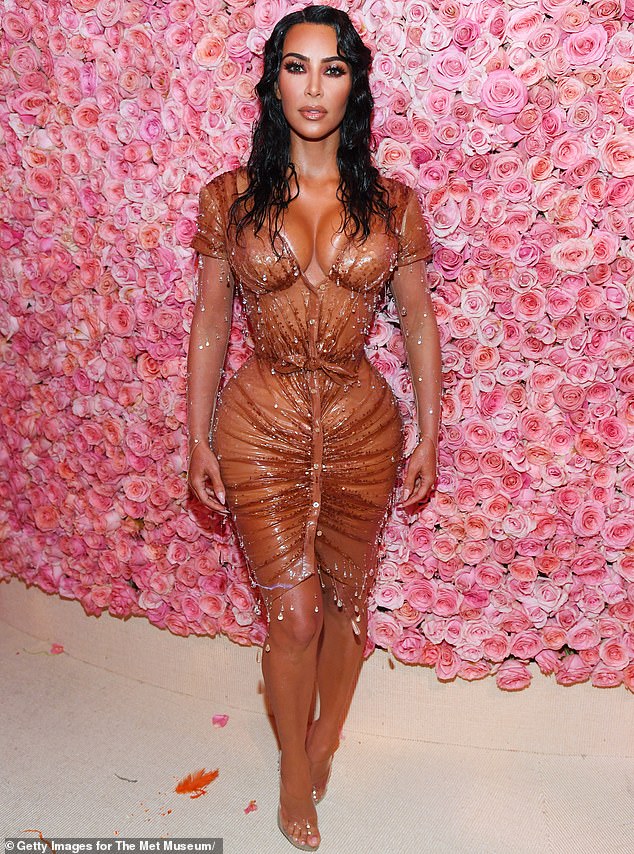 ‘Kim doesn’t want the drama’: The insider explained: ‘She wishes he would keep all of this private,’ adding: ‘She’s upset that he’s chosen to go this route’

‘Earlier this week, Monday, when I went to go pick my kids up from [sic] school, the security stopped me at the gate,’ he said.

‘So at that point, security was in between me and my children and that’s what was not going to happen,’ Kanye added.

‘My daughter wanted me to go inside. I was like, I am the richest black man and North’s father, right, and the security was able to stop me from going into the room with my daughter and that had not been defined.’ 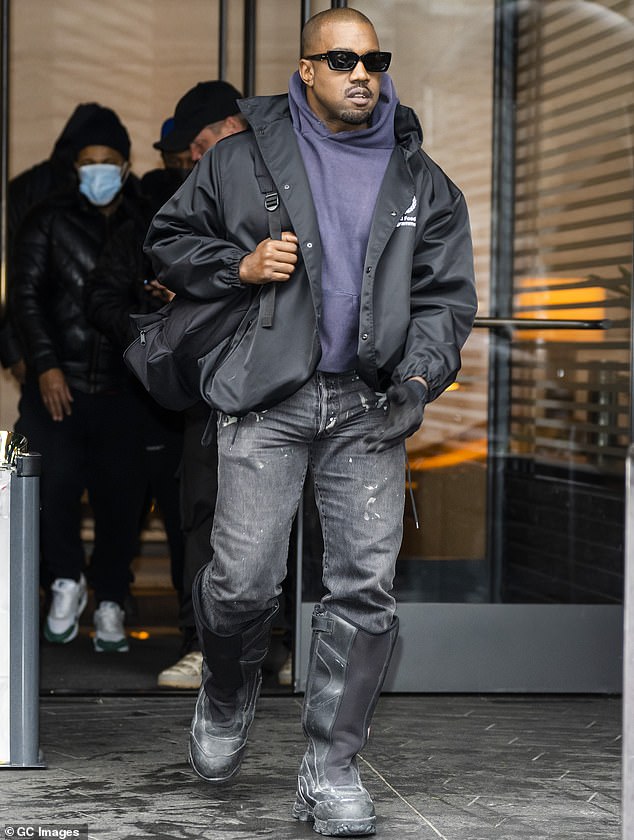 Out and about: Kanye, who is pictured last week in New York, is now involved with Uncut Gems actress Julia Fox whom he met on New Year’s Eve in Miami

However the Power rapper insisted that the alleged conversation between Kim’s security and his cousins was ‘non-aggressive.’

Kim’s divorce lawyer Laura Wasser quickly gave a statement to Page Six saying: ‘Mr. West being kept from the children, by security or anyone else, is news to us.’

Kanye and The Game dropped a new song called Eazy on Saturday – and in the lyrics Kanye takes aim at his children for being wealthy and pampered. 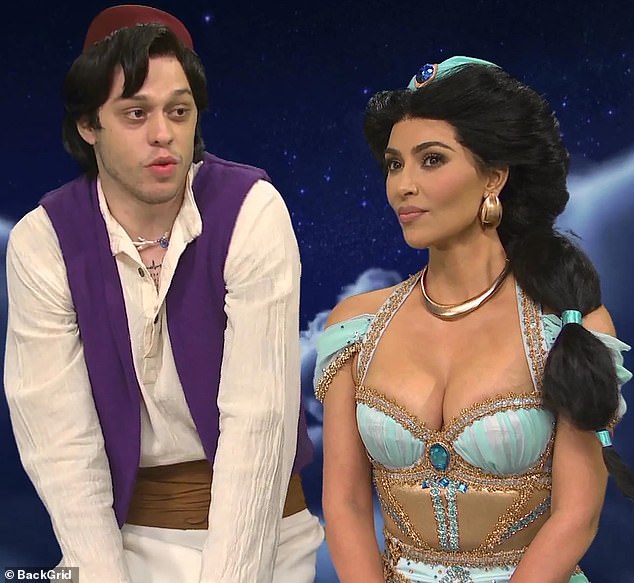 New romance: Kim is now dating Saturday Night Live cast member Pete Davidson whom she is pictured with on the sketch show this past October

‘When you give ’em everything, they only want more,’ he raps. ‘Boujee and unruly, y’all need to do some chores.’

The lyric continues: ‘Rich a** kids, this ain’t yo mama house. Climb on your brother’s shoulders, get that Top Ramen out.’

He also lambasts Kim’s parenting style, rapping: ‘I got love for the nannies, but real family is better. The cameras watch the kids, y’all stop takin’ the credit.’

Before taking up with Julia, Kanye made numerous public statements urging Kim to repair their marriage, including in lyrics written for his new album Donda. 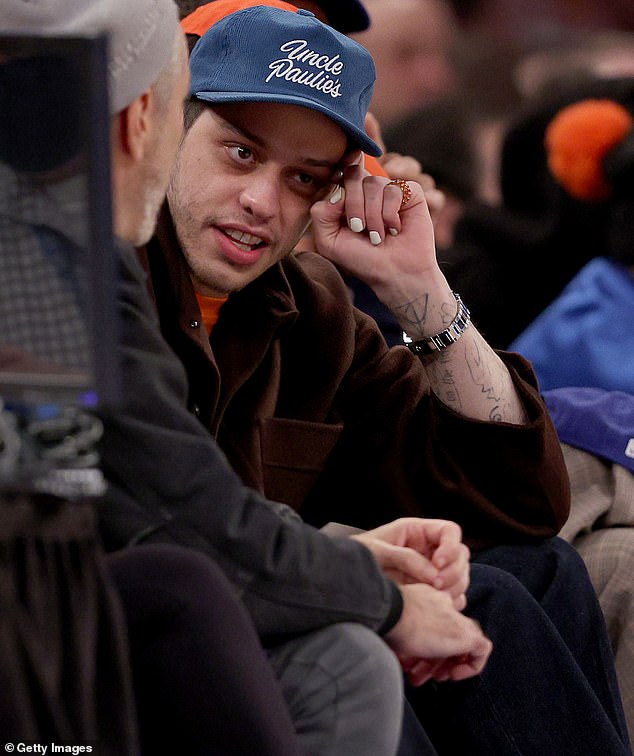 There he is: An insider close to the situation said Pete, who is pictured this week at a Knicks game at Madison Square Garden, ‘has not met the kids and he also has not been to her home’

In one song he pleaded with her to ‘come back’ to him and in another he goaded her that ‘you’re still in love with me.’

During a Los Angeles Mission event to feed the needy on Skid Row the day before Thanksgiving, he allegedly gave a speech about his collapsing marriage.

Kanye, who has cut multiple religious albums, said God wanted him and Kim to patch up the marriage, according to Page Six.

Kim’s involvement with Pete went public after she made her hosting debut in October on Saturday Night Live, where he is a cast member.