Kim Kardashian continued to be her own best advert on Saturday as she modelled an array of shapewear from her Fendi x SKIMS collection.

The Keeping Up With The Kardashians star, 41, looked sensational as she posed in two looks from the line.

For her first look, the mother-of-four wowed in a purple two-piece that put her famous figure on full display. 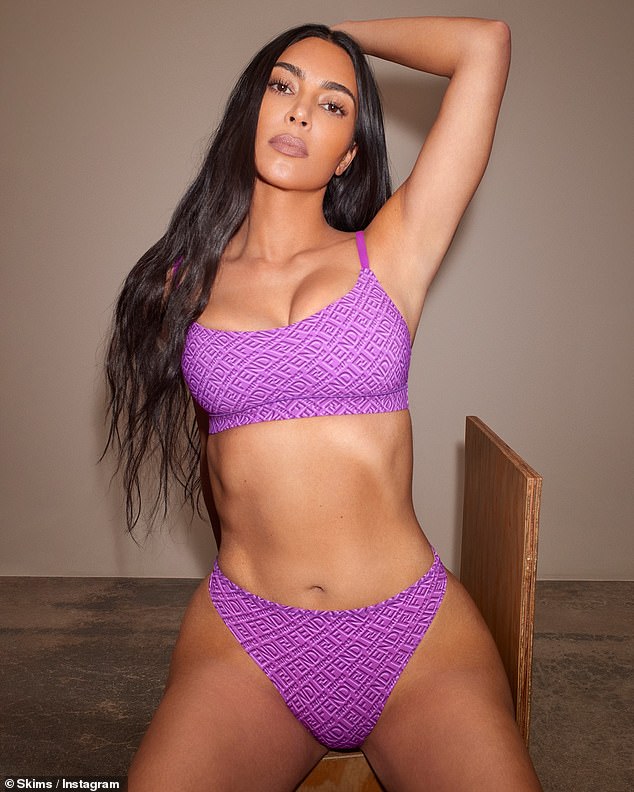 Wow: Kim Kardashian showed off her toned abs and ample cleavage in lingerie as she modelled her Fendi x SKIMS line for a SKIMS Instagram post on Saturday

Kim’s toned abs and ample cleavage were highlighted in a lilac bralet and matching briefs that complemented her tanned complexion.

The reality starlet also wowed in a coral bodysuit that aided in cinching in her slender waist even further.

Wearing her raven locks in loose waves and sporting a full face of makeup, Kim exuded glamour in the sultry snaps. 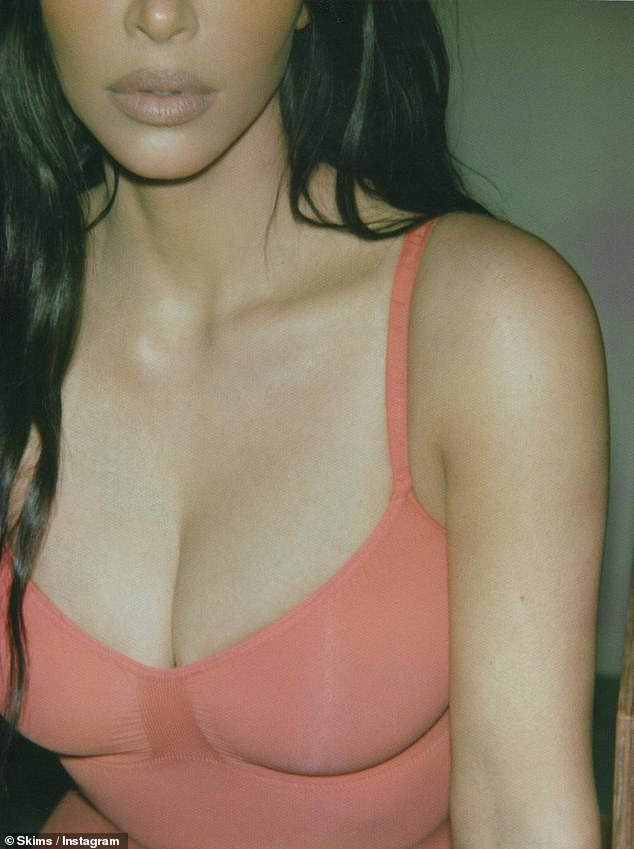 All eyes on her: The Keeping Up With The Kardashians star, 41, looked sensational as she posed in two looks from the line

In the three images Kim showed off her chest as well as her toned tummy.

The caption read: ‘@KimKardashian wears the #FENDIxSKIMS Scoop Bralette, part of the final release of best-selling styles from Drop 1 coming on Friday December 10 at 9AM PT / 12PM ET at www.fendiskims.com (US only).’ 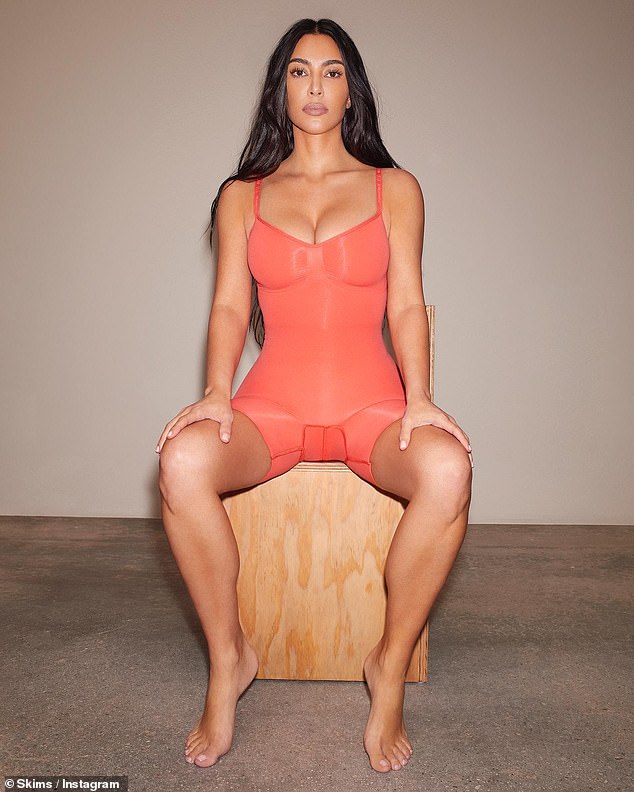 Gorgeous: The reality starlet also wowed in a coral bodysuit that aided in cinching in her slender waist even further

Last week, the reality TV star took to Instagram to make the announcement to her 267million followers that there was more Fendi x SKIMS.

The second release will kick off on December 10 just in time for Christmas shopping.

‘A special, second release of best-selling styles from Drop 1: the logo printed bodysuits and underwear.’

She then ended with: ‘This is the final chance to own a piece of the groundbreaking collaboration between @Fendi and @SKIMS. Drops Friday December 10 at 9AM PT at www.fendiskims.com.’ 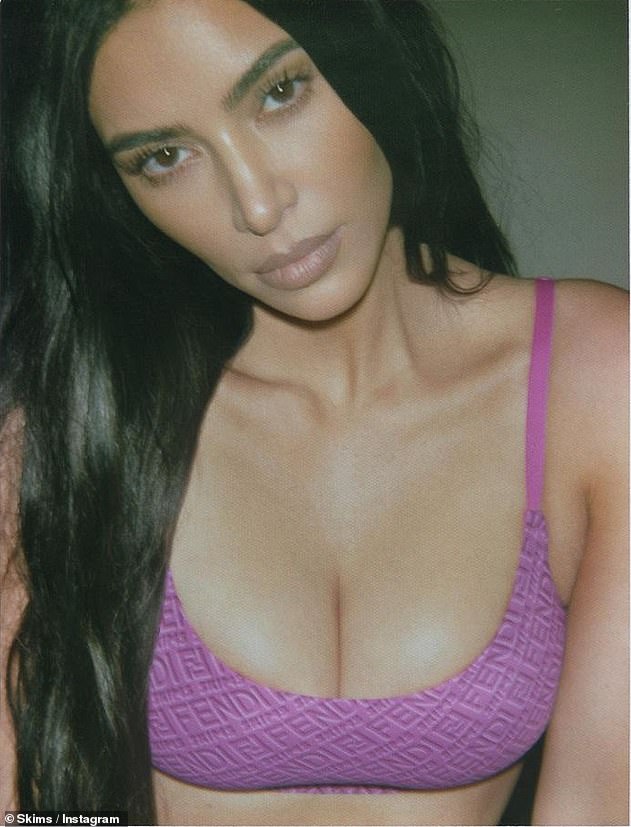 Hot in December: Kim heated up her SKIMS Instagram page last Tuesday by sharing several new images of herself 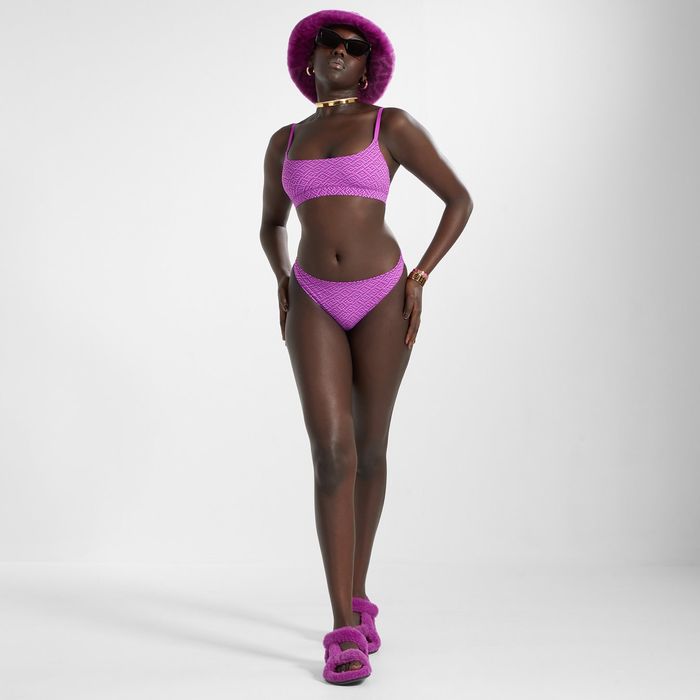 Kim was praised for her first drop of Fendi x SKIMS. The line reportedly made $1 million within 60 seconds of going live, which also caused it to sell out.

TMZ reported that the Keeping Up with the Kardashians’ star’s shapewear hit seven figures in record time on November 9.

Among the sell-out items was the brown leather gown the businesswoman wore and suffered a ‘little fashion emergency’ in at the WSJ Innovator Awards, which is the most expensive item costing $4,200.

At the other end of the price range, the $100 hosiery bra in all shades shot off the shelf. 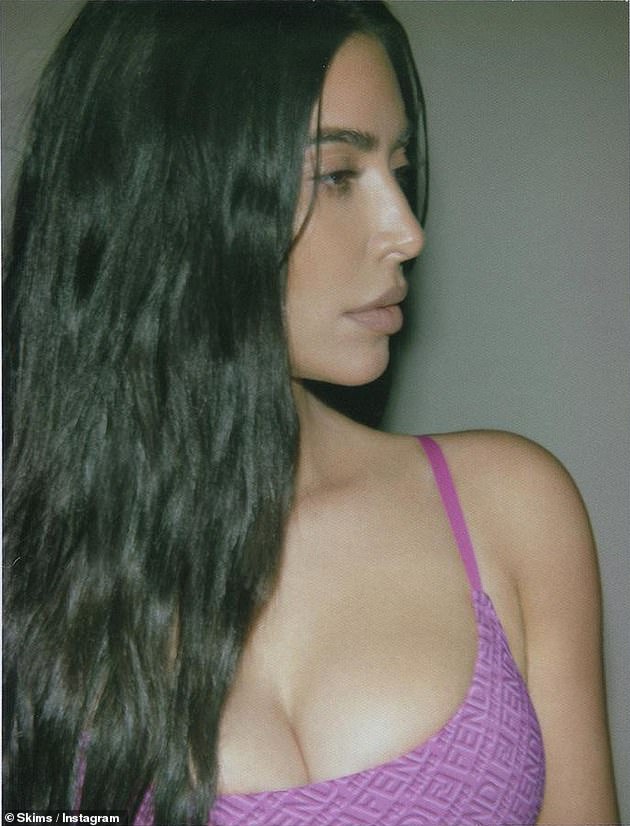 A model at heart: The reality star looked sultry in a lavender bra and panty set from her super successful Fendi X SKIMS line

She was named WSJ. Magazine’s 2021 Brand Innovator at the awards ceremony at the Museum of Modern Art in New York, and fortunately Fendi’s Kim Jones was on hand to assist Kim when her Fendi x SKIMS brown leather gown became unzipped, revealing her nude shapewear.

The mother-of-four – who has North, eight, Saint, five, Chicago, three, and Psalm, two, with 44-year-old rap legend Kanye West – quipped: ‘Thank you to Kim Jones because I just had a little fashion emergency.

‘Thank god I had SKIMS on, or this would have been a very different kind of show tonight.’

She was honoured for the success of her shapewear brand – which launched a collection with luxury fashion house Fendi on November 9.

She said on stage collecting the prize: ‘Fifteen years ago when I was starting my career I could have never dreamed that I would have been getting an innovator award for brands.

‘Back in the day, I would have been the face of any brand if they would have asked me.’ 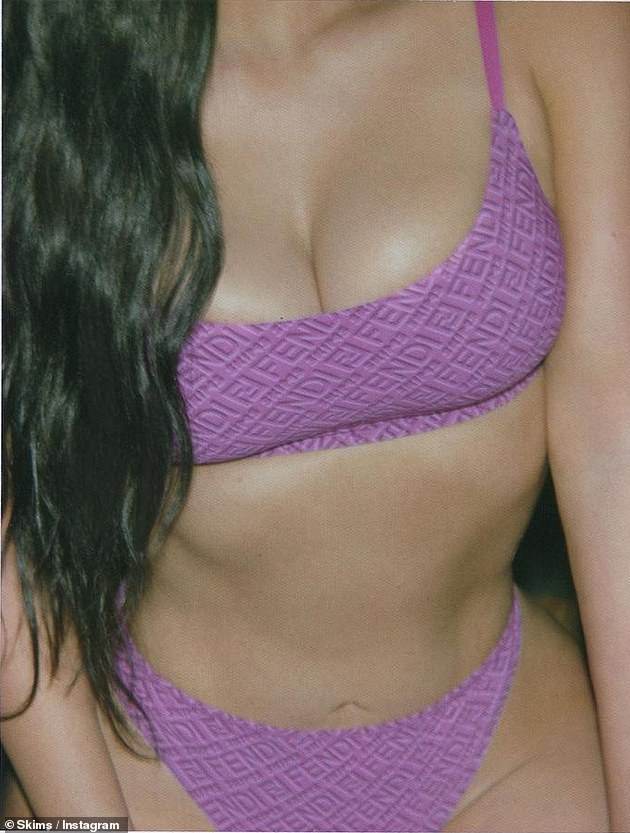 Tanned and toned:  In the three images Kim showed off her chest as well as her toned tummy as she seems to have on only light nude makeup

The law student also admitted that she felt like a fraud promoting weight loss pills while wearing shapewear in the past.

She confessed: ‘I did cupcakes to weight loss pills all at the same time. I’m just so grateful that I have my own brand now. I would do all of that and then wear shapewear on top. It was all contradictory. I’ve always liked to come up with solutions and I’m just really thankful.’

Meanwhile, Kim recently revealed that her estranged husband has a hand in her businesses. The KKW Beauty and KKW Fragrance founder told WSJ. Magazine: ‘He has a piece of Skims himself and gives [the team] inspiration but also information.’

Kim – who recently joked that she split from the Stronger hitmaker because of his personality while hosting Saturday Night Live – declared: ‘Kanye will always be the most inspirational person to me.’

Meanwhile, Pete and MGK sent fans into a tizzy as they stripped down to Calvin Klein underwear during an Instagram Live on Monday evening.

The bad boy BFFs did a takeover on the brand’s official page where they humorously talked about each other’s ‘goods’ in excess while wearing white briefs.

Prior to the wild nearly 8-minute live (which occurred at 8PM ET), they had teased something was brewing after Pete — who has no social media — hijacked Calvin Klein’s Instagram page and exchanged a few words with MGK. 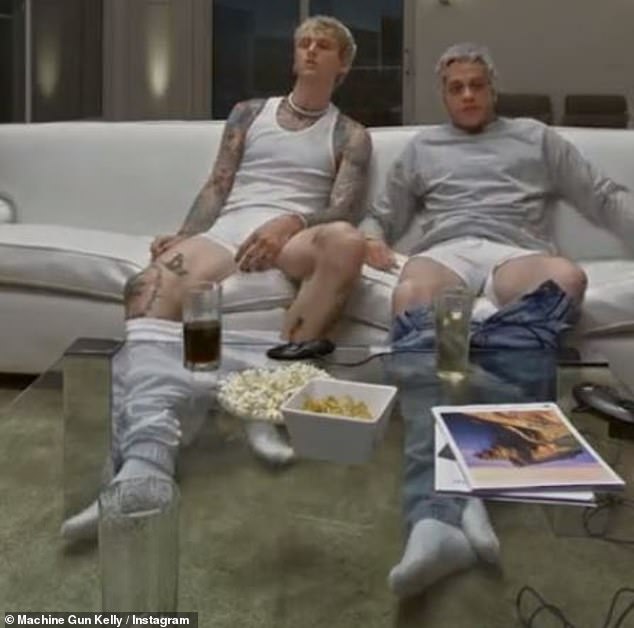 The duo conversed about their poses as they attempted to step into the role of ‘underwear models’ — with each showing the other what they had in mind while laying on the couch.

Pete — who has been dating Kim Kardashian — dropped his pants first and despite being known for his so-called ‘BDE’ self-deprecatingly joked about his manhood.

He spoke about ‘fluffing the boys’ and ‘stuffing a banana’ in his pants before continuing to say that he was not ‘a grower or a shower’ and was ‘the same soft and hard.’

The locker room talk continued with the Bloody Valentine crooner, 31, who is romantically involved with Megan Fox.

He spoke of how he should have added ‘two socks’ into his underwear prior to the live and additionally spoke about the possibility of Pete pouring milk on him for their shoot. 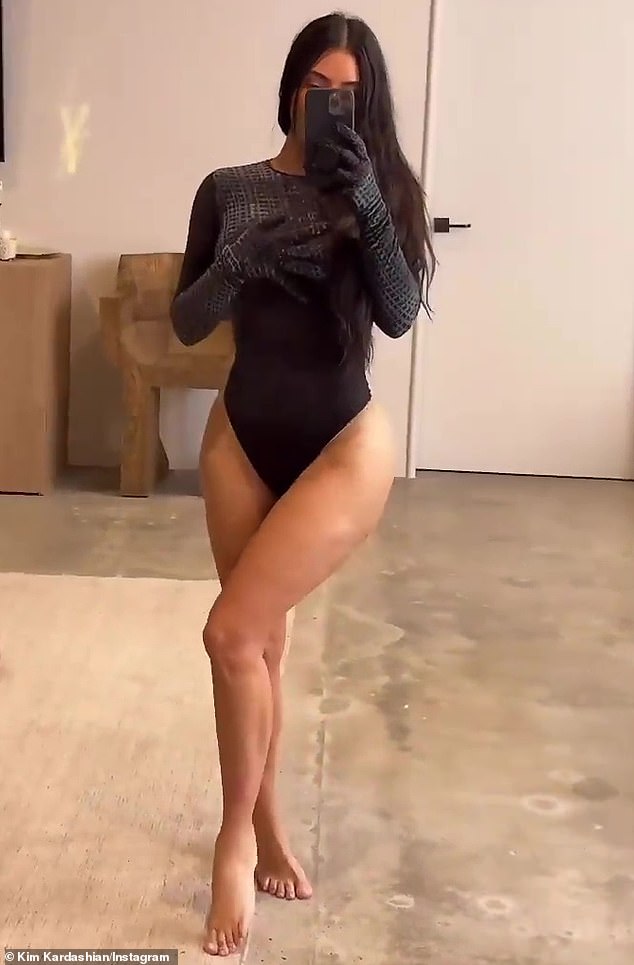 The best sellers are back: Kim also said, ‘A special, second release of best-selling styles from Drop 1: the logo printed bodysuits and underwear.’ Seen last week