Kourtney Kardashian and beau Travis Barker have day out at Disneyland

Kourtney Kardashian, 42, puts on a busty display in a black bodysuit during day out at Disneyland with beau Travis Barker, 45, her sons Mason and Reign, and his kids Alabama and Landon

Their romance has been going from strength to strength since they began dating in January.

And Kourtney Kardashian was seen enjoying a day out at Disneyland with her beau Travis Barker, his daughter Alabama, 15, and son Landon, 17, as well as her sons Reign, six, and Mason, 11, in Anaheim, California. on Sunday.

The Keeping Up With The Kardashians star, 42, put on a busty display in a plunging black bodysuit that she paired with loose-fitting pink trousers. 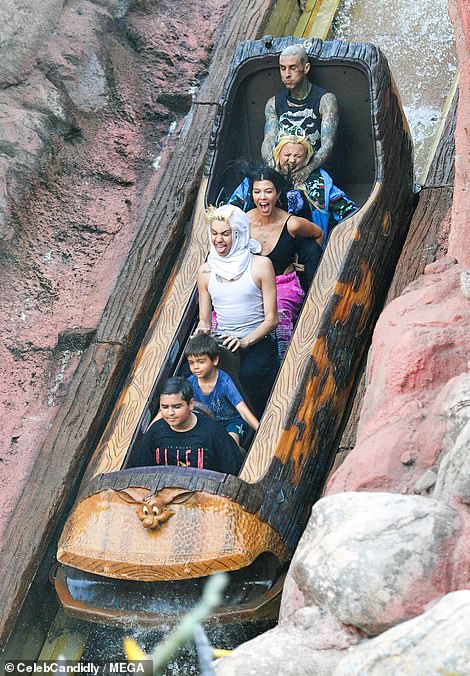 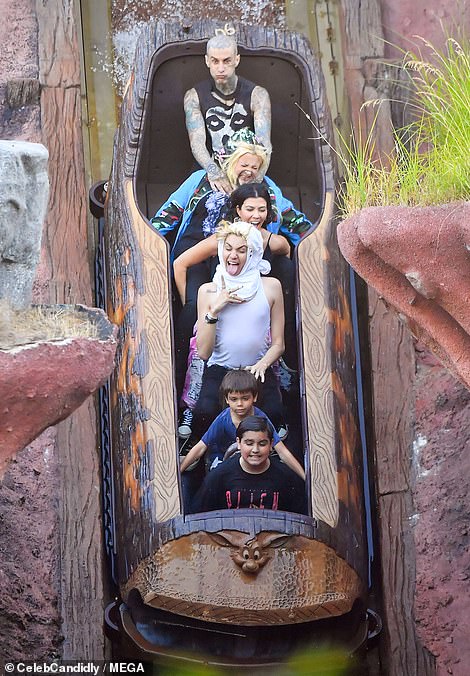 Outing: Kourtney Kardashian put on a busty display in a plunging black bodysuit on a day out at Disneyland with beau Travis Barker, her sons, and his kids on Sunday

Kourtney’s ensemble featured cut-out detailing on the sides to accentuate her slender waist and hips.

She added a casual flair to the look by stepping out in a pair of Converse trainers, and she accessorised with a pendant necklace.

The raven-haired beauty’s locks were styled into loose waves that fell over her shoulders, and she wore a light palette of make-up for the outing.

The group were seen enjoying a number of rides together, including thunder mountain and Splash Mountain. 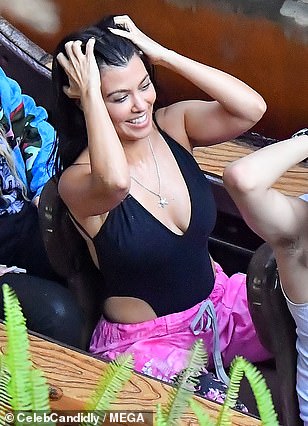 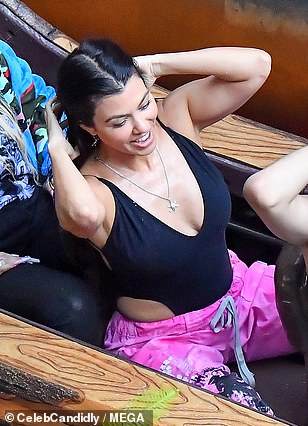 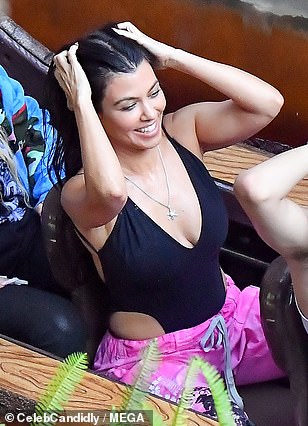 Wow! Kourtney’s ensemble featured cut-out detailing on the sides to accentuate her slender waist and hips 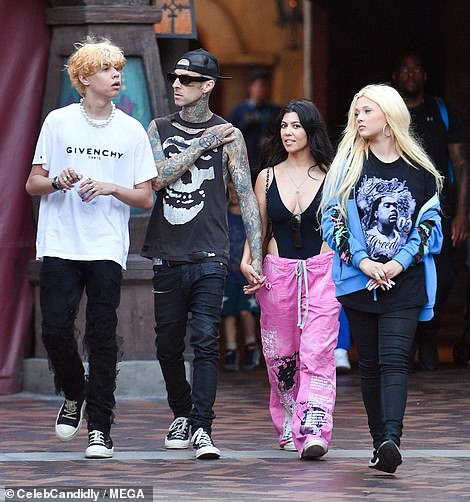 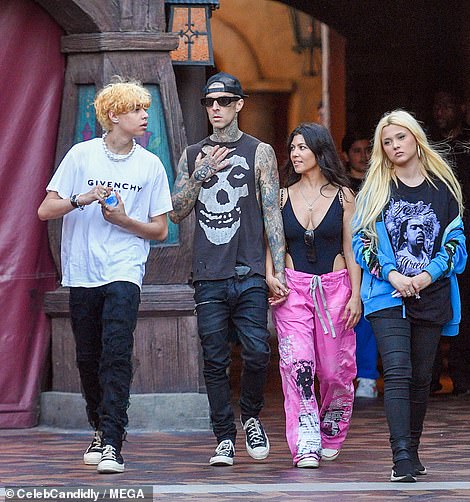 Outing: Kourtney was seen strolling with Travis and his kids Alabama (R) and Landon (L) 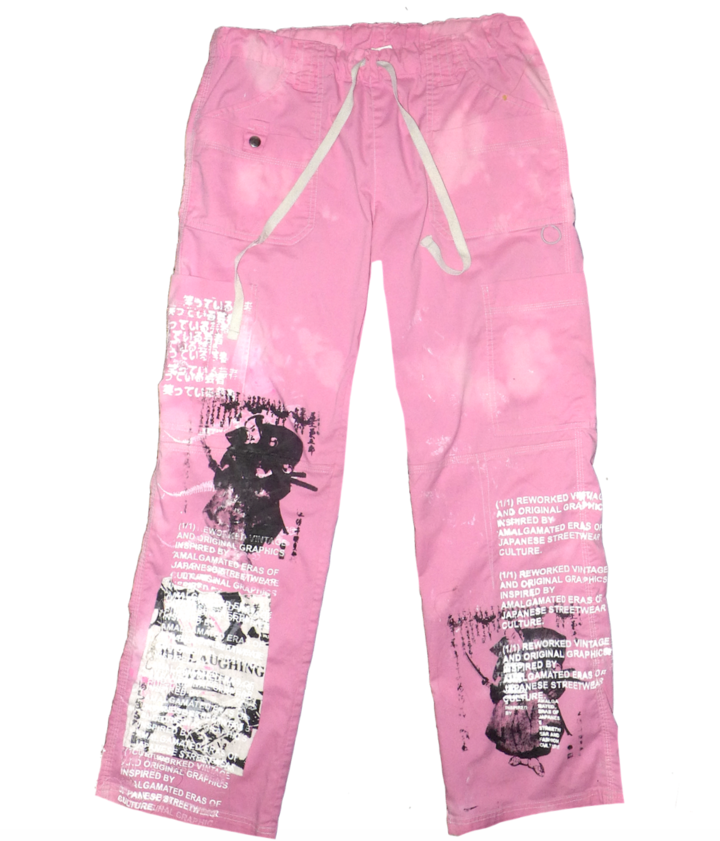 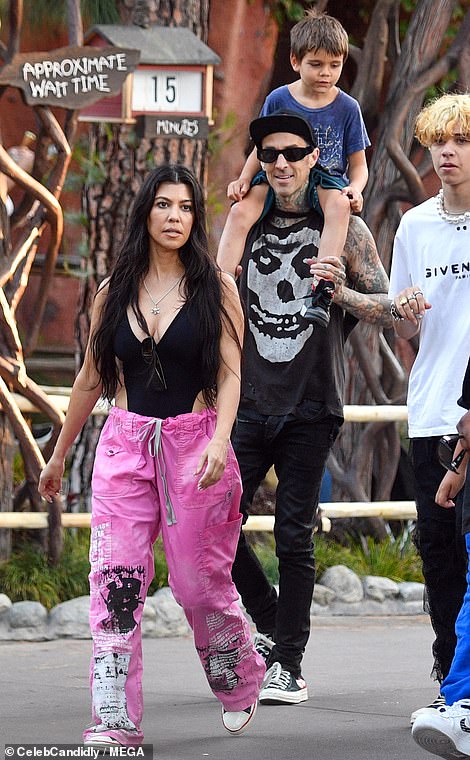 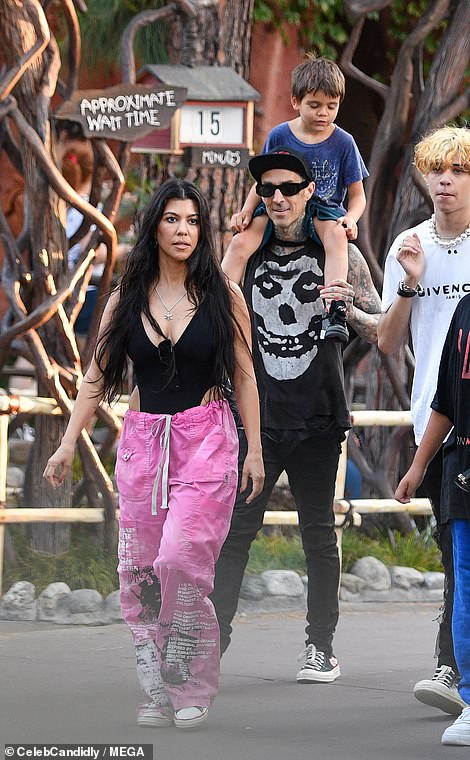 Sweet: Travis was seen carrying Reign on his shoulders in one moment

The loved-up duo have been fuelling rumours they are ready to commit to spending the rest of their lives together for weeks.

‘An engagement could be right around the corner for Kourtney and Travis,’ a source told Us Weekly last month.

Kourtney shares three kids — Mason, 11, Penelope, eight, and Reign — with her former partner Scott Disick, whom she was in a relationship with from 2005 to 2015. 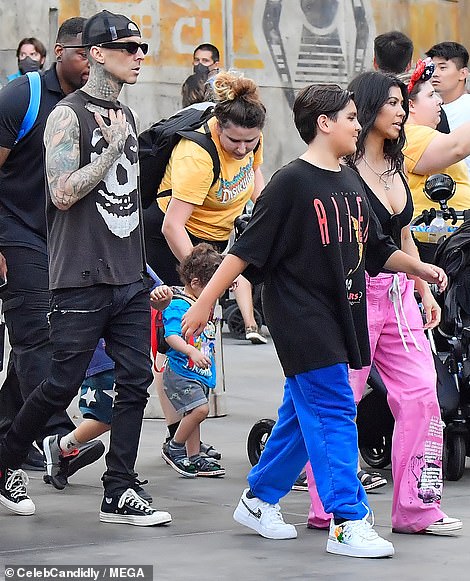 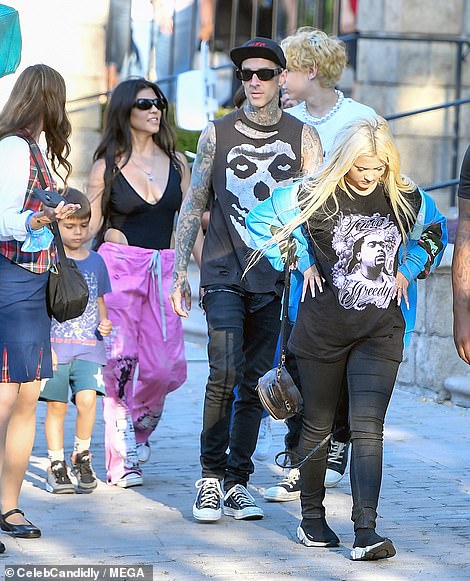 Doting mum: Kourtney was seen chatting away with Mason during their outing 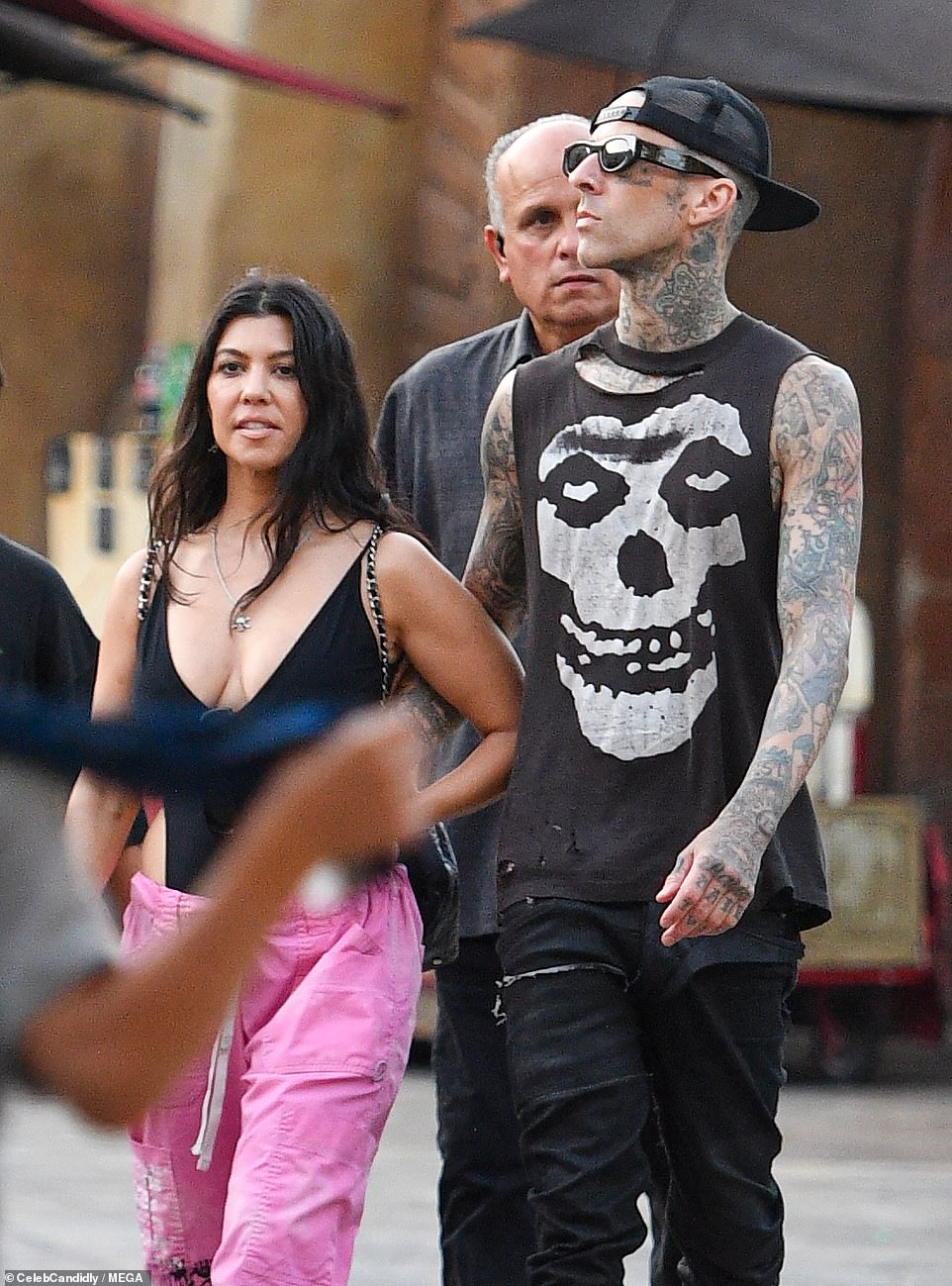 Loved-up: Kourtney and Travis have been fuelling rumours they are ready to commit to spending the rest of their lives together for weeks 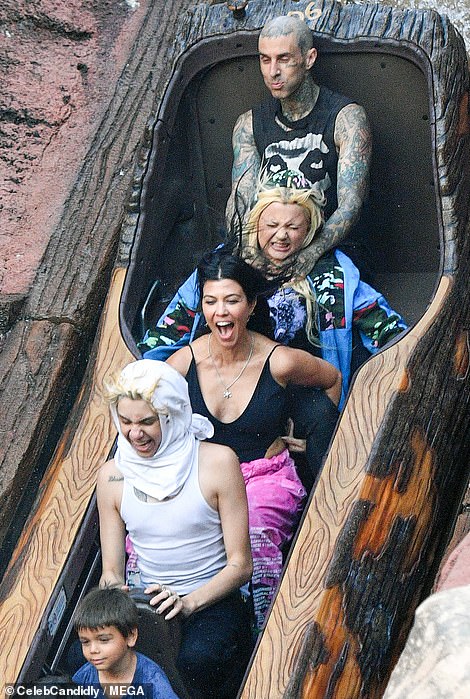 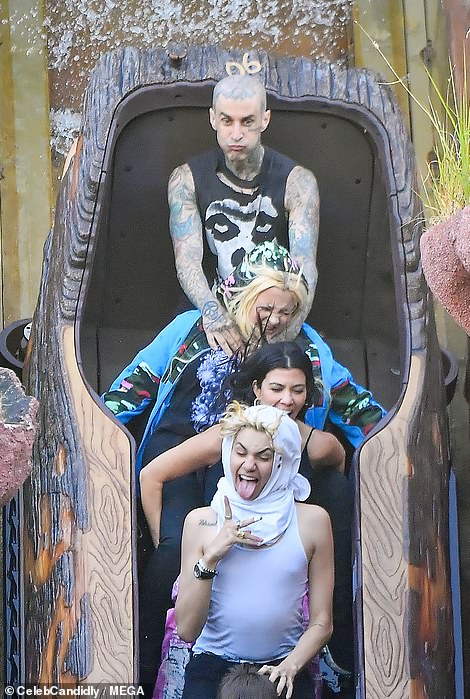 Like father, like son: Travis and son Landon were seen putting on an animated display on the Spalsh Mountain ride

After joking that he wanted to ‘kill’ any man that came close to Kourtney on part two of the Keeping Up With The Kardashians reunion last month, the Talentless designer said that he wanted her to ‘be happy.’

‘I think if you really love somebody, you want them to be happy no matter what,’ Scott told host Andy Cohen. ‘So I do give her a blessing to be happy.’

Back in May, Alabama, claimed that her mother Shanna, 46, hadn’t seen or called her in seven months in a short Instagram Live video. 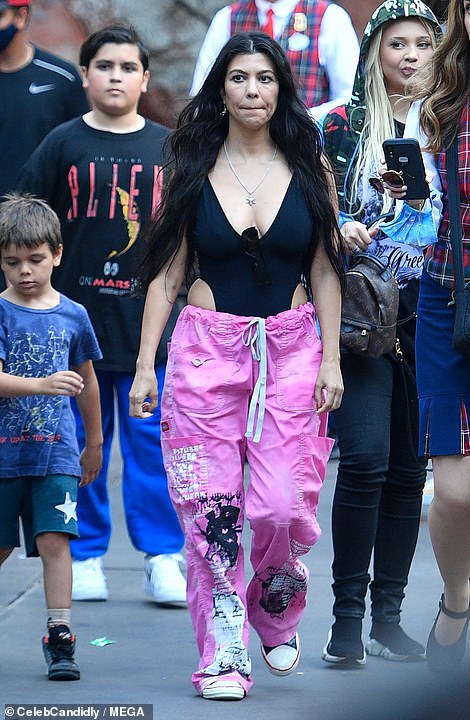 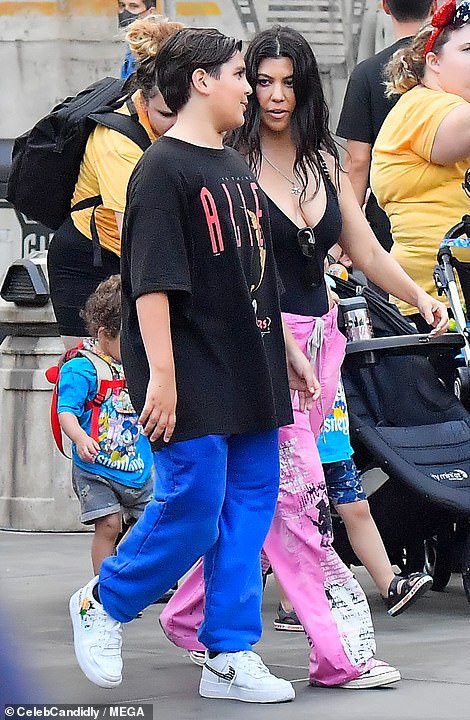 Casual chic: Kourtney stepped out in a pair of black Converse trainers 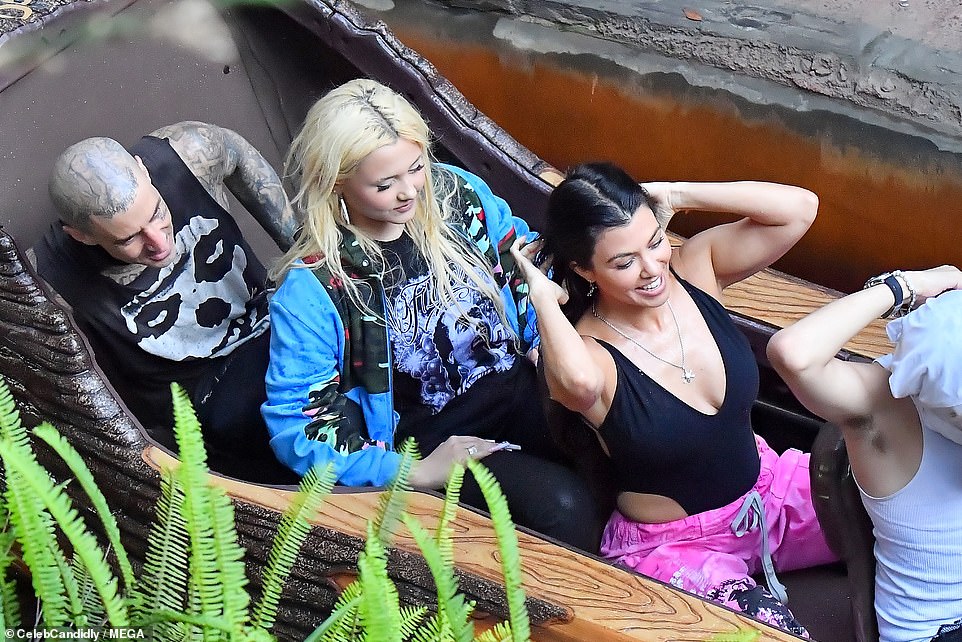 Close: Back in May, Alabama, claimed that her mother Shanna, 46, hadn’t seen or called her in seven months amid reports Kourtney had become a ‘huge support system’ for her 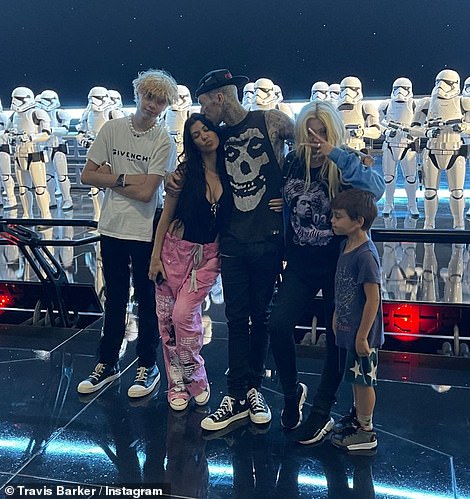 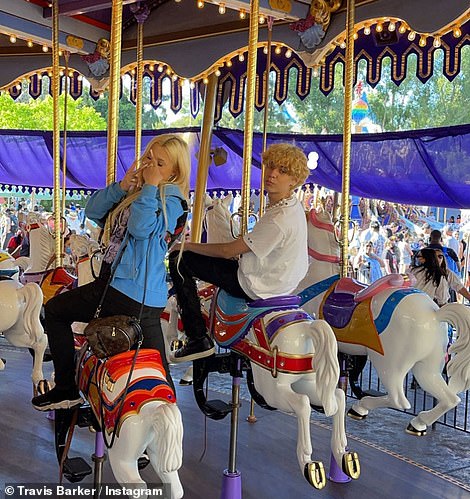 Family fun: On Sunday, Travis shared pictures from their trip to the theme park

The shocking clip came amid a report that her father’s girlfriend Kourtney had become a ‘huge support system’ in her life.

She said in the brief clip: ‘If you guys support [Moakler], you can’t — you’re saying, “Don’t disrespect the person who gave you life,” but the woman that gave me life isn’t in my life.

‘She asked to see me maybe once — I’ve gone seven months without seeing my mom and her not calling me once. So if you guys support that, go for it, support it, I don’t care.’

Alabama capped off the short clip by urging her fans not to speak about their relationship without hearing all sides. 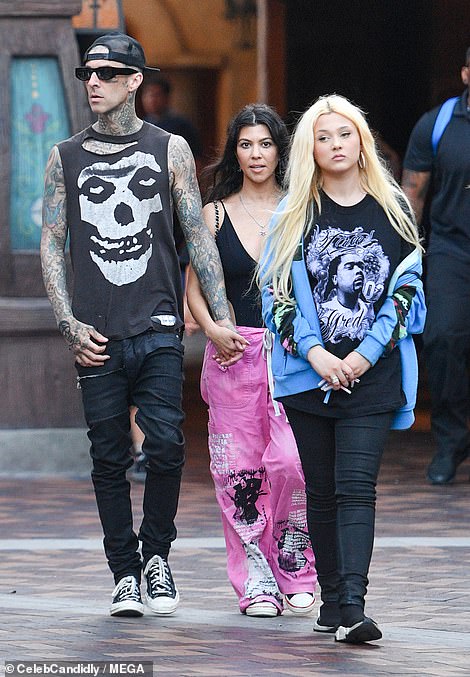 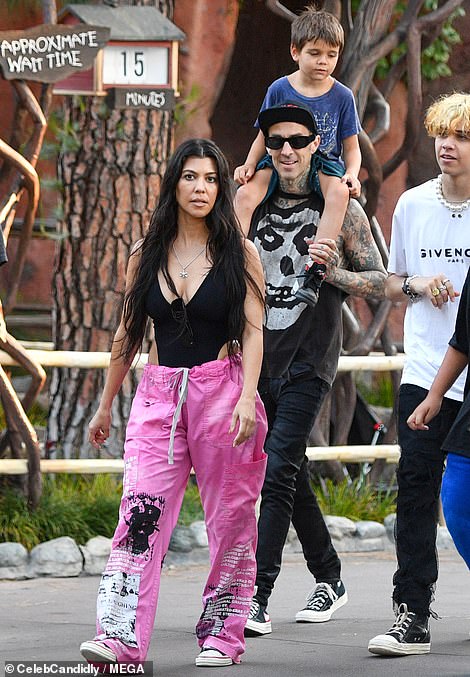 Comfy: Alabama stepped out in a black printed T-shirt and skinny jeans 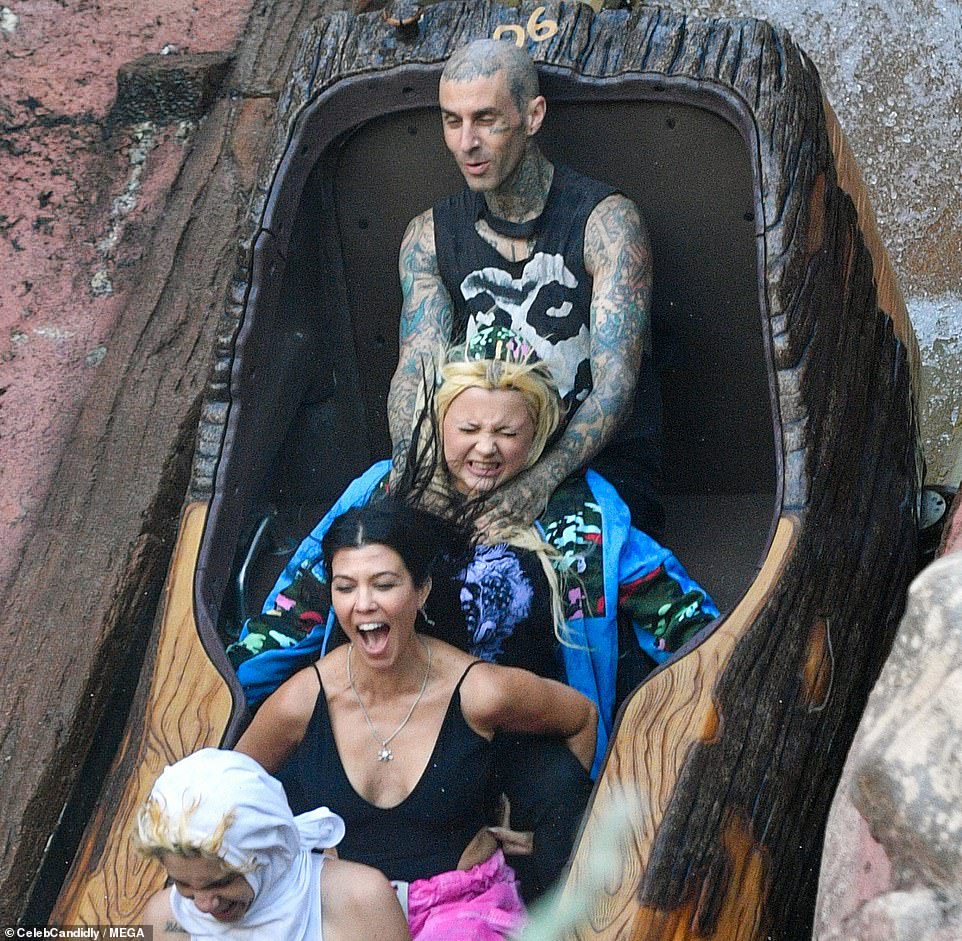 Safe: Travis kept his arms around his daughter as they hurtled down the Splash Mountain ride