Lady Gaga revealed that she stayed in character while filming House Of Gucci while promoting the film on Tuesday on The Late Show with Stephen Colbert.

The 35-year-old entertainer said she even remained in character when calling her mom.

Gaga, who wore a black long one-shoulder midriff baring dress with gold hoops, told Stephen, 57, that she fully committed herself to the method acting technique. 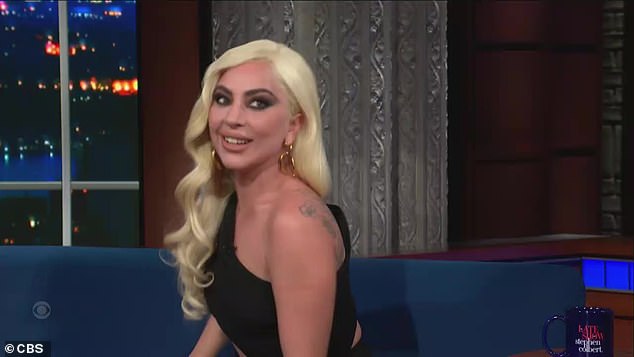 Method actor: Lady Gaga revealed that she stayed in character while filming House Of Gucci while promoting the film on Tuesday on The Late Show with Stephen Colbert

‘I really wanted to do a good job and staying in character for me was essential,’ she said.

Gaga said she had the same approach with her music and that she was like a child with her art.

Stephen then asked her about her new movie House Of Gucci.

Gaga said her character Patrizia Reggiani was based on a real person who is still alive. She said there were landmark moments in her character’s life when people believed that money was at stake but that it really wasn’t.  sai 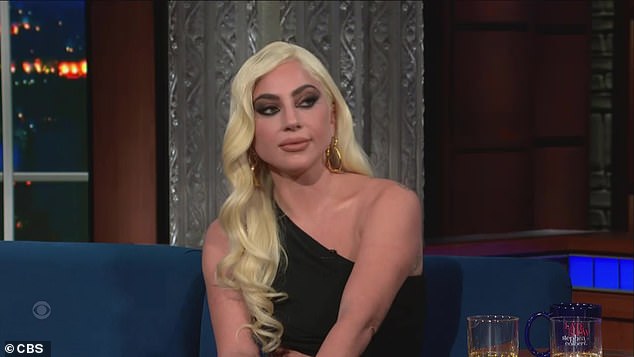 In character: ‘I really wanted to do a good job and staying in character for me was essential,’ she said

Johnny Oleksniski writes: ‘Mystifyingly, the front-page killing and ensuing court battle only take up the last 10 minutes of this sleep aid. The preceding two-and-a-half hours are a glacial yet completely uninformative history of the luxe brand framed as a “Succession”-like struggle for power among the Gucci family…

‘But the “Bad Romance” singer focuses so much on tics and facial expressions and her Slavic accent that there’s no soul, genuineness or vulnerability to the character. It’s like watching the “Paparazzi” music video on a loop for three hours…

‘If only Scott’s vision was as visually dazzling as a Gaga video. “Gucci” is a pale, ugly film whose underwhelming glamour doesn’t match the grandeur of a European fashion house. It looks as pricey as a knock-off Gucci bag on Canal Street.’

Kevin Maher writes: ‘With a flabby screenplay, alas, and a bunch of halfcocked thesps, the results, as they are here, can be atrocious. This howlingly inept biopic, probably his worst film since The Counsellor, has several moments of such knuckle-chewing awfulness that the entire movie seems to lurch into wonky self-parody and could possibly secure a lucrative box-office future as a laugh-a-long camp classic in the vein of Showgirls or The Room.’

Robbie Collin writes: ‘I only wish I could report that Ridley Scott’s new film – the 83-year-old master’s second this year, after October’s The Last Duel – managed to match its lead actress’s pace for its entire two-and-a-half hour duration. But while House of Gucci is never less than watchably raucous, it’s also essentially a soap opera with airs, rambling along from episode to episode without ever settling into its stride.’

Alex Godfrey writes: ‘Despite the story’s operatic sweep, despite its undeniably Shakespearean entanglements, it feels oddly undramatic, the filmmaking itself quite detached. And certainly, despite all the catastrophe, you won’t be shedding tears over anybody, but maybe that’s the point? It’s a case-study of a business gone amok, and while you don’t truly get to know any of these people as actual human beings, you probably wouldn’t want to.’

Brian Viner writes: ‘It is a muddle, confused in both narrative and tone, and not especially helped by the decision to get the entire ensemble talking foreign-accented English, as if it were an extended episode of ’Allo ’Allo. Disconcertingly, the plot keeps deviating from the relationship between Patrizia and Maurizio to focus on the boardroom grapple for control of the company.

‘Another problem is the film’s length – over two and a half hours. Ridley Scott and his producer – who happens to be his wife Giannina Facio – could have cut 30 minutes from the movie. That said, House of Gucci is by no means devoid of pleasures. It is sumptuous to look at, with terrific period detail, and Pacino especially is in fine form. But, certainly, the scene-stealer is Gaga.’

Neil Smith writes: ‘Despite its tonal missteps and O.T.T. indulgences, House of Gucci is always more chocolato than the alternative. Yet there are times it bears resemblance to a flea-market knock-off rather than the pricey real deal it so stridently seeks to emulate.’

Christina Newland writes: ‘A wobbly and unstoppable juggernaut, barrelling ahead with the brazen confidence of a flashy Italian supercar with its ‘check engine’ light on, House Of Gucci is a glorious, trashy crime melodrama based on real life. It pings from tragicomic to tragic to unintentionally funny from moment to moment: sometimes in the same scene.’

The actress said she did her own investigative reporting on the character after Ridley Scott, the director of the film, told her Patrizia had really been in love.

‘I think she is sitting in Milan somewhere with deep regret,’ said Gaga.

Stephen also asked her what it was like to sing the National Anthem at the inauguration for President Joe Biden. 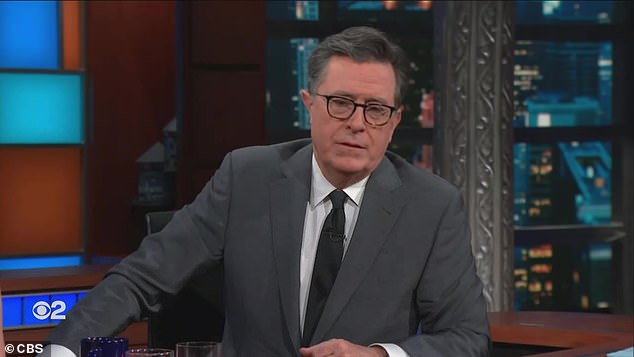 Inauguration singer: Stephen also asked her what it was like to sing the National Anthem at the inauguration for President Joe Biden

‘It was one of the proudest moments I have ever had as a musician and a performer,’ she said. ‘Every performer has something that is meaningful to them about why they do what they do. For me it’s I love to make the public smile and I had two minutes and thirty seconds to talk to the whole world and I thought it might be a good opportunity to sing to everybody. Not just to President Biden fans and to the people who voted for him but to the whole world because the world has been on fire and everybody deserves love.’

Stephen asked her if it was true that part of her dress was bulletproof.

‘Yeah there was a bulletproof vest sewn into the dress,’ Gaga said. ‘It was a scary time in this country. I care a lot about my family and as a performer I understand that I put myself in all types of dangerous situations in order to do what I love. I did that for myself but also for my family, my Mom and my Dad and my sister would feel confident.’ 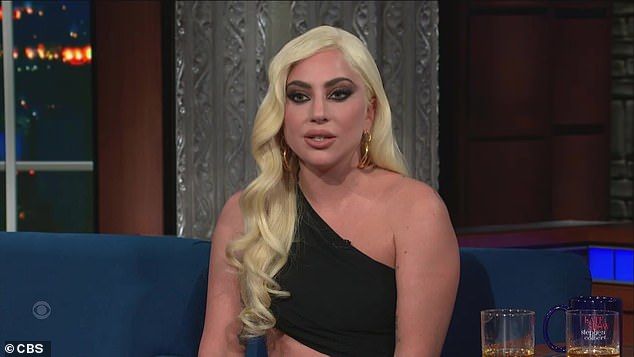 Bulletproof vest: ‘Yeah there was a bulletproof vest sewn into the dress,’ Gaga said of her inauguration gown. ‘It was a scary time in this country’

She said her navy and red dress was a Schiaparelli Italian couture dress and that everything she wore that day was inspired by the Italian and French revolution.

‘Because in a lot of ways I felt that day was a revolution for this country and a real opportunity for us to look past the resistance and look forward into a time when he can be kinder and we can be braver as a nation as people,’ said Gaga.

Stephen then spoke to Gaga about her relationship with Tony Bennett, 95. 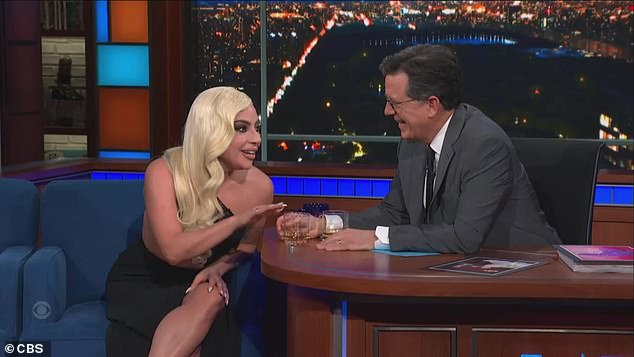 Close bond: Stephen then spoke to Gaga about her relationship with Tony Bennett, 95

Gaga said she called Tony when their jazz record Cheek To Cheek went number one.

‘Music is a miracle,’ said Gaga, who encouraged anyone with a loved one with Alzheimers to use the power of music. 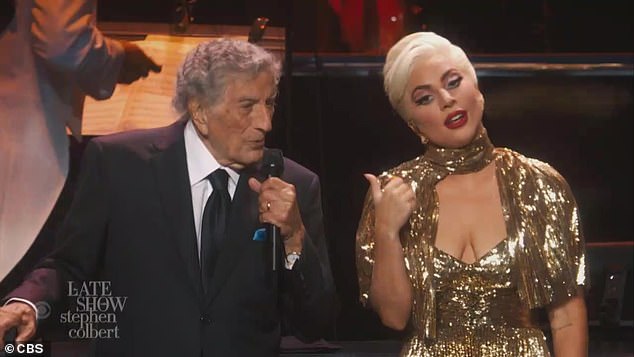 Grammy nominations: The duo were just nominated for five Grammy Awards for the collaboration including album of the year for ‘Love for Sale’ and record of the year for ‘I Get a Kick Out of You’

‘An Evening with Tony Bennett and Lady Gaga’ will air on Sunday on CBS and the Paramount+ streaming service.

Stephen and Gaga then sang a few lines of Cole Porter’s song Anything Goes.

The show then played a clip of Gaga singing with Tony from the special. 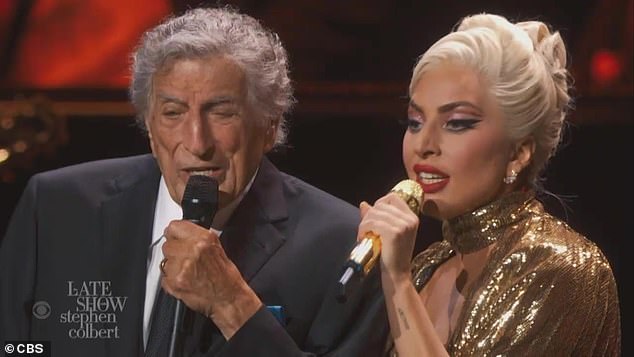 Coming soon: ‘An Evening with Tony Bennett and Lady Gaga’ will air on Sunday on CBS and the Paramount+ streaming service

Will Smith Opens Up To Trevor Noah About Infamous Chris Rock Oscars Slap: 'That Was A Horrific Night'