Stormzy was having the time of his life at this year’s Glastonbury festival, and one great moment was caught on camera.

The acclaimed rapper, 28, made history in 2019 when he became the first Black British solo artist to headline the Pyramid Stage.

Three years later, the musician took a step back from the stage and enjoyed the 2022 festival from the other side as he mingled in the crowd with his friends and enjoyed the likes of Kendrick Lamar and Billie Eilish.

Of course, if you’re at a festival and you’re not making history with a record-breaking performance, you’re going to let your hair down a bit – and that’s exactly what Stormzy did.

A video uploaded to an anonymous TikTok account calling itself the ‘Glasto insider’ shows the star, a drink in his hand, looking to be in top spirits.

He takes a step down from a small stage – and then proceeds to have an almighty fall to the ground. 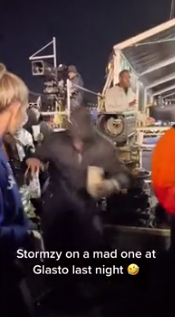 It appears the Shut Up rapper lost his footing on the way down from the raised stage, and practically flipped over on to his head on the way down, leading some of those around him to gasp and exclaim in shock.

But the musician didn’t let it phase him, and as he was helped up by friends and a staff member he already had a massive grin pasted to his face, as someone shouted out: ‘It could have been worse!’

Stormzy looked just slightly sheepish as he brushed himself off, but in general appeared to remain in good spirits and was seen laughing at himself as he caught his bearings again.

It was a fun-packed weekend for the rapper, who was celebrating after being conferred with an honorary degree from Exeter University for his philanthropy work.

The star was seen hanging out in the VIP area, often in his trademark heart-shaped glasses, as he embraced life at the festival on the other side of the barriers.

Stormzy was also seen taking quiet moments with his friends in more private areas of the festival, strolling across the grounds with a drink in his hand.

One video captured by a festivalgoer saw the Vossi Bop musician throwing shapes with the rest of the massive crowd at headliner Kendrick, while another saw him meeting fellow headliner Billie Eilish.

After two years delay due to the pandemic, Worthy Farm hosted Billie as the festival’s youngest solo headliner, Sir Paul McCartney as the oldest, and performances from some of the biggest music names around the world.

More than 200,000 fans descended to Somerset, with a whole host of famous faces amongst them.