Leonardo DiCaprio hopes new film Don’t Look Up will be a ‘wake-up call’ about climate change (so will he FINALLY give up private jets?)

Leonardo DiCaprio said he hopes his new Netflix film will open viewers’ eyes to the threat of climate change in a new interview on Today.

The 47-year-old Oscar winner was joined by his costar Jennifer Lawrence and writer–director Adam McKay to chat about the satire, in which politicians, the media and even ordinary citizens are unconcerned about a world-ending comet flying toward Earth.

But despite his hopes that the Netflix film’s audience will see the movie as an allegory about the dangers of not address climate change, he didn’t address his own well-documented habit of jetting around the globe in carbon-polluting private jets. 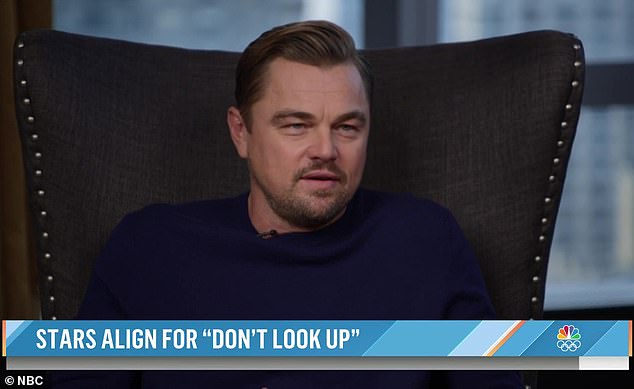 Mixed messages: Leonardo DiCaprio, 47, spoke Thursday on Today about his new film Don’t Look Up and how he hopes fans will be moved by it to act on climate change, despite his own carbon-polluting behaviors

After host Savannah Guthrie quizzed DiCaprio on the film’s connections to both the climate crisis and the ongoing battle against the novel coronavirus, DiCaprio said he hoped the film would be a ‘wake-up call.’

‘If you do a film about climate change, it’s nearly impossible to get people to get a sense of urgency and hold a mirror to our culture and media and politics and all of these things,’ the Once Upon A Time In Hollywood star said. ‘And I just felt like this was an incredible gift to be a part of a movie that encapsulated exactly what we’re going through at this particular moment in time.

‘But yeah, I am a bit of a Debbie Downer because the clock is absolutely ticking,’ he added.

Although the film was first inspired by world leaders’ failures to take greater action to combat the threat of devastating climate change, DiCaprio also highlighted how well Don’t Look Up works as an allegory about refusal to fight Covid-19. 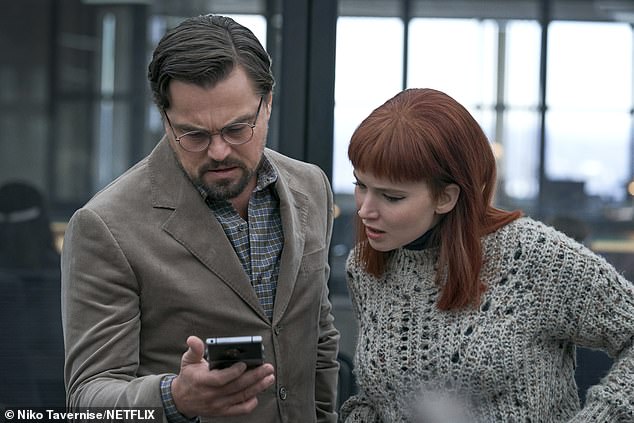 Inaction: ‘If you do a film about climate change, it’s nearly impossible to get people to get a sense of urgency and hold a mirror to our culture and media and politics and all of these things,’ DiCaprio said; seen with Jennifer Lawrence in Don’t Look Up 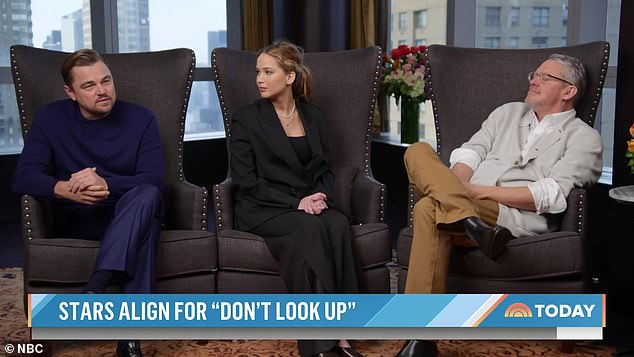 Not optimistic: He said he wanted the film to be a ‘wake-up call,’ but admitted he was ‘a bit of a Debbie Downer’; pictured with Lawrence and director Adam McKay

‘After seeing the movie last night, something kind of resonated in me,’ he said. ‘It’s how we process bad news and how it becomes a debate, how truth and facts can be distorted or politicized.’

The Revenant star noted how there was a ‘whole new wave of denial of science’ once the pandemic took root.

‘It was amazing to witness what was going on in real time as we were making this movie. We’re sitting there trying to explain science as [Dr. Anthony] Fauci was doing the same thing. It was a bizarre experience,’ he added.

DiCaprio and Lawrence both star in the film as astronomers who discover a comet with a ‘100 percent’ likelihood of hitting Earth and ending all life as we know it.

But in clips from the film, they’re seen arguing about the importance of acting to avert the disaster while the President of the United States (played by Meryl Streep) ignores them for fear that acting will harm her poll numbers, and her son and Chief of Staff (Jonah Hill) also brushes them off. 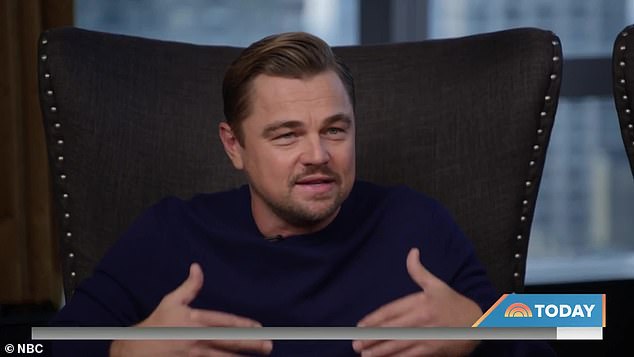 True to life: The actor compared Don’t Look Up to a ‘whole new wave of denial of science’ he observed amid the coronavirus pandemic 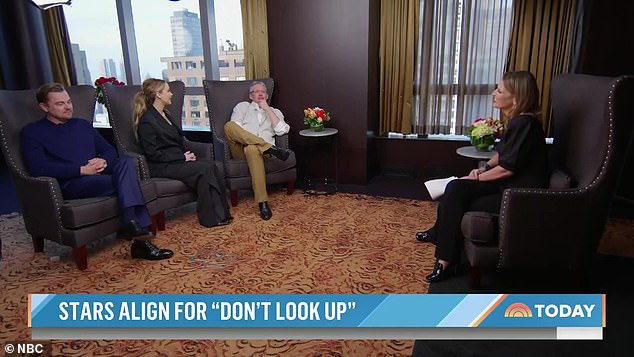 Hypocrisy? Despite his advocacy about climate change, DiCaprio has continued to fly on private jets, which create more carbon pollution than commercial flights

‘Had this movie had a different ending, it wouldn’t be the story that it is,’ he said. ‘And we’re not going to give that away, but it needed to have this ending. It’s a wake-up call. It’s an alarm clock.

‘If it didn’t have that ending, there was no way we were going to be a part of it,’ he added.

Despite DiCaprio’s longstanding advocacy for addressing climate change, he appears to be continuing his pattern of using private jets to take trips around the world.

Earlier this month, sources told Page Six that the actor took a jet from Miami to New York — and then back — within a single day.

He was in Florida for the Art Basel and had been seen viewing some of the exhibitions and later partying on November 30, before he was supposed to co-host a benefit at Soho Beach House with Sean Penn for his CORE (Community Organized Relief Effort) organization, which has lately been focused on Covid-19 relief.

Guests at the benefit were told that DiCaprio was unexpectedly called away to New York, though he would be returning for the event.

Sources said he ended up being delayed and only arrived back at the charity function by 11 p.m., which left some guests concerned about the necessity of the trip. 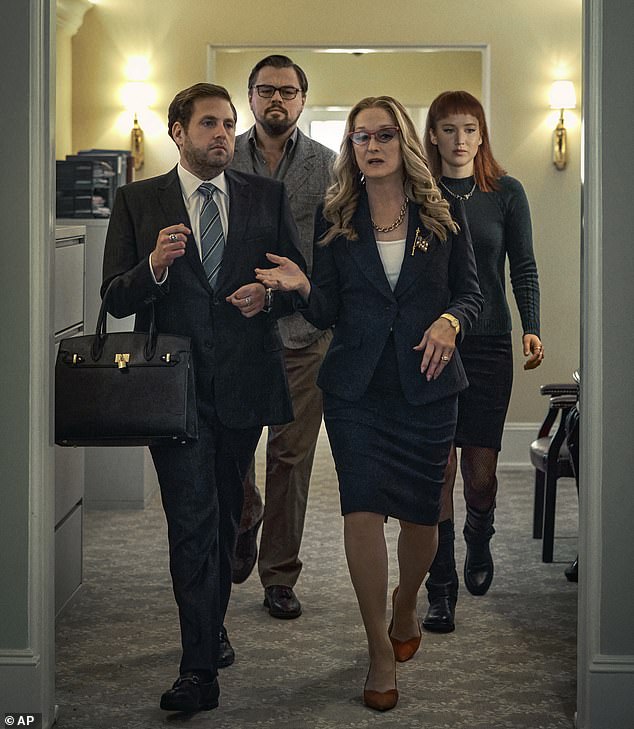 Necessary trip? Sources told Page Six earlier this month that he flew from Miami to New York and back in a single day; picture with Jonah Hill, Meryl Streep and Lawrence in Don’t Look Up 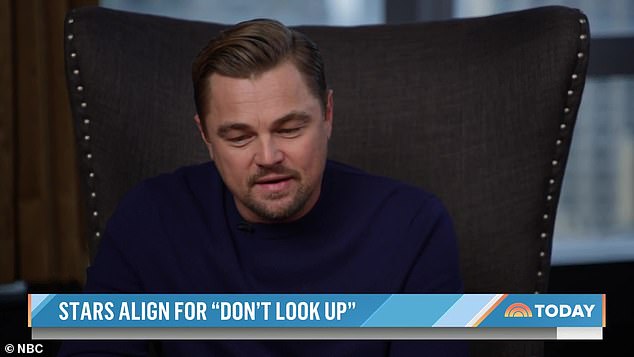 Taking action: However, the advocate claims he’s a ‘CarbonNeutral citizen’ after paying a company to plant a forest of trees in Mexico, according to Forbes

DiCaprio hasn’t shied away from raising awareness about climate change, and he even referenced it in his Academy Award acceptance speech in 2016 when he won Best Actor for The Revenant.

‘Climate change is real, it is happening right now. It is the most urgent threat facing our entire species, and we need to work collectively together and stop procrastinating,’ he said from the stage.

Despite his use of private jets, DiCaprio claims that he is ‘CarbonNeutral citizen’ after a London-based company planted thousands of trees in his name in Mexico to offset the carbon he produces, according to Forbes.

But sources close to the actor claimed that he has begun to use more commercial flights, which produce fewer carbon emissions per passenger, than private flights, according to Page Six.

They added that when he flew to the COP26 Climate Summit in Scotland last month, he opted for a commercial jet flight, rather than a private flight. 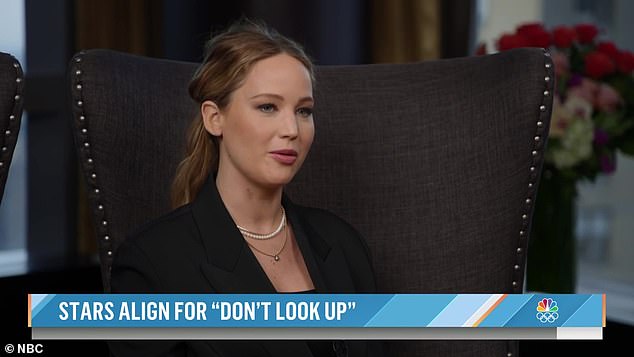 Stuck in the middle: Elsewhere in the Today interview, Jennifer Lawrence said Don’t Look Up encapsulated the ‘helplessness’ that she feels about major world issues 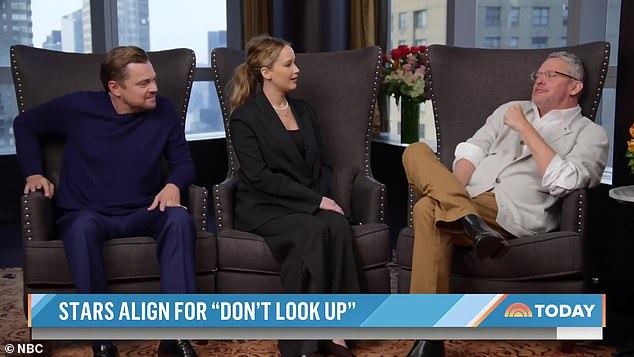 Adding emotion: McKay said that he originally wanted to make an humorous escape from darker subject matter before opting for a more poignant take

Elsewhere in the Today interview, Jennifer Lawrence said Don’t Look Up encapsulated the ‘helplessness’ that she feels about major world issues.

‘It was also so poignant that all of the ire kind of landed squarely on her shoulders because she was saying something that people didn’t want to hear,’ she said of her character.

She joked that her character has a ‘glassy stare’ in parts of the Netflix film because she was written as a stoner.

McKay, who directed The Big Short and Vice after previously making broader comedies, said that he originally wanted to make an humorous escape from darker subject matter before opting for a more poignant take.

‘We made this movie during the pandemic, before there was even a vaccine. So, I think we were all in the mood to laugh because things were so grim,’ he explained. ‘But at the same time, we needed to feel some other feelings as well.’

Don’t Look Up is currently in limited release in theaters and will be available to stream on Netflix starting December 24.