Ready to celebrate All Night Long! Lionel Richie, 73, brings girlfriend Lisa Parigi, 33, to American Music Awards as he receives Icon Award… and his honored with star-studded performance of We Are The World

The 73-year-old singer-songwriter and his 33-year-old partner flashed huge grins at the event and cuddled up close as they posed up a storm.

The 73-year-old singer made history as he became the only artist to take to the stage at the event in every decade since the show began when he accepted the accolade from Smokey Robinson and he called on the current generation of artists to use their time in the spotlight to ‘inspire’. 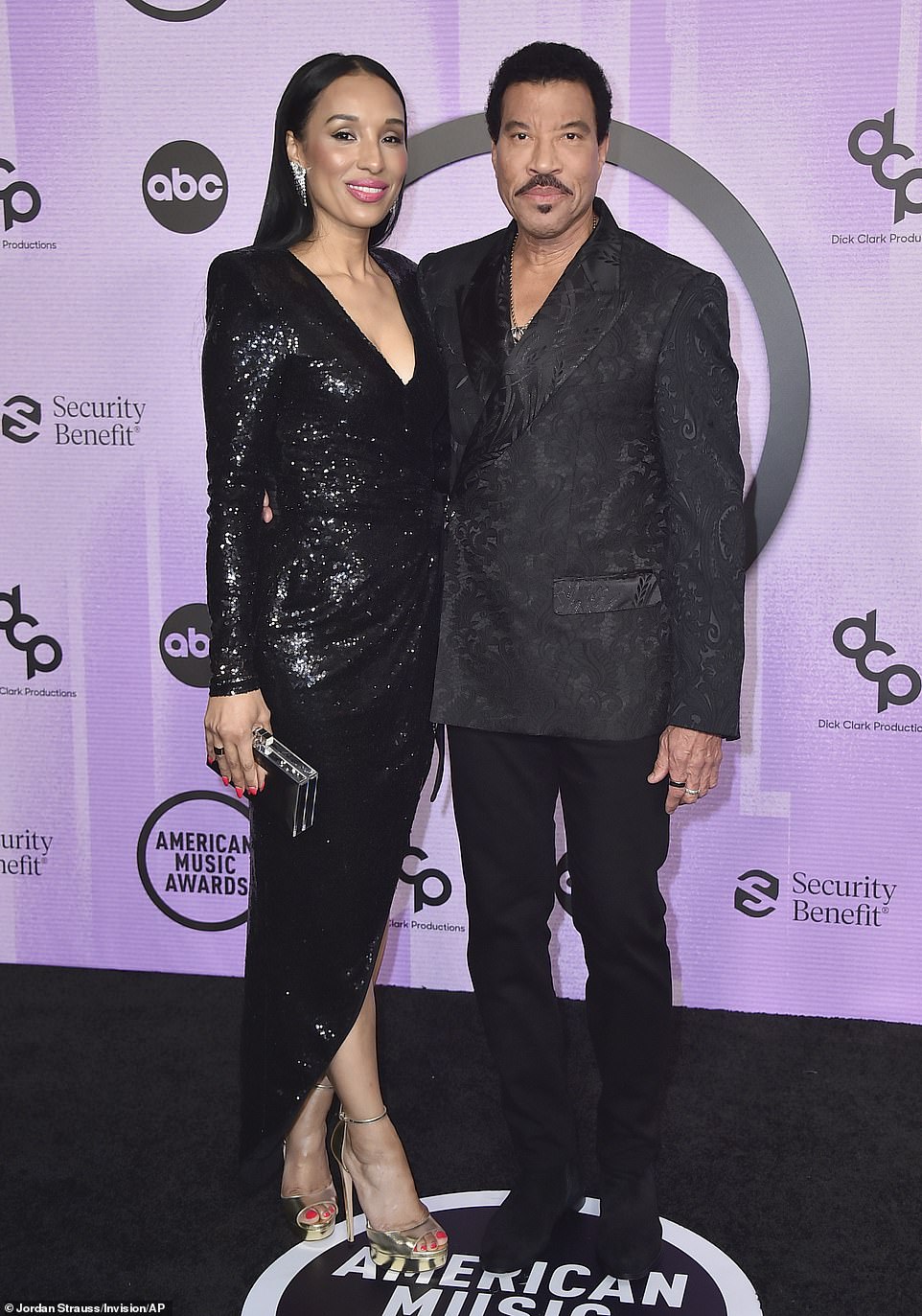 Speaking on stage at Los Angeles’ Microsoft Theater, he said: ‘I started out here at the AMAs. And my career, to this day 40 years later, I’m back at the AMAs.

‘What I want to say and take this time to do is to talk to the young superstars. God has given you a light. That light is special, that light is only given to a few. 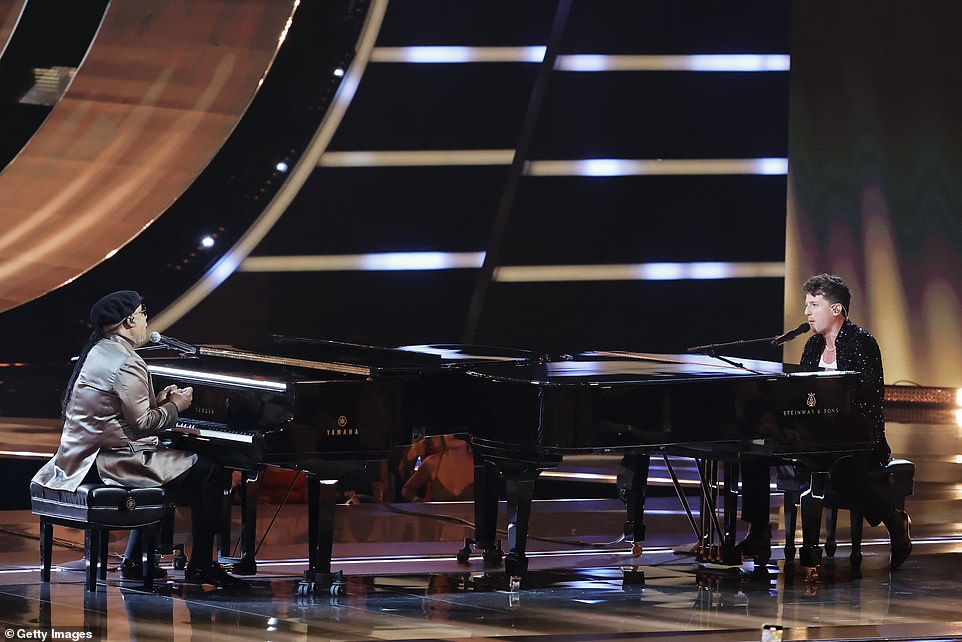 Closing act: Stevie Wonder, 72, and Charlie Puth, 30, closed out the show with a star-studded tribute of ‘We Are The World’ in honor of Lionel Richie, 73 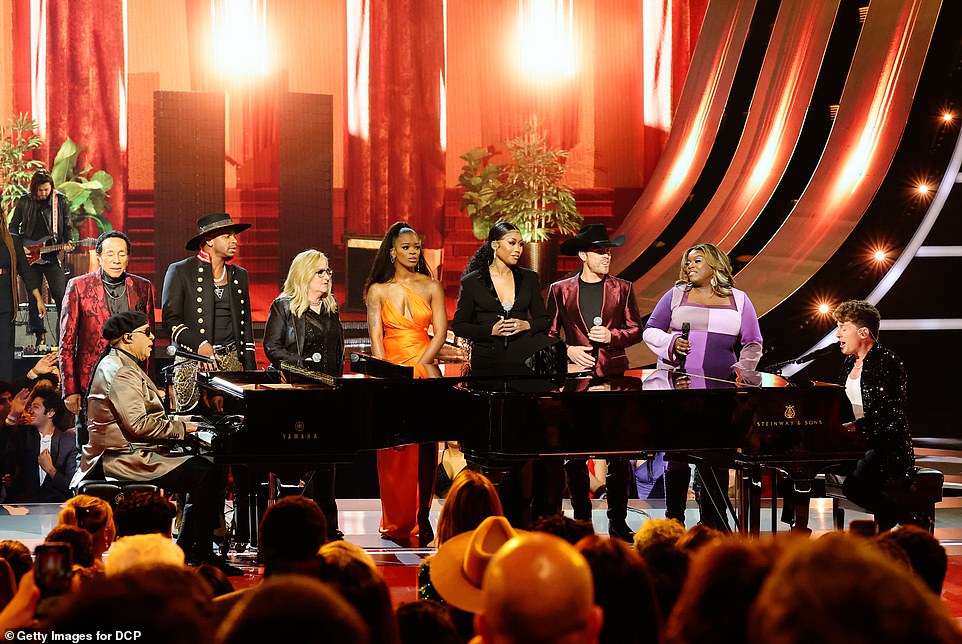 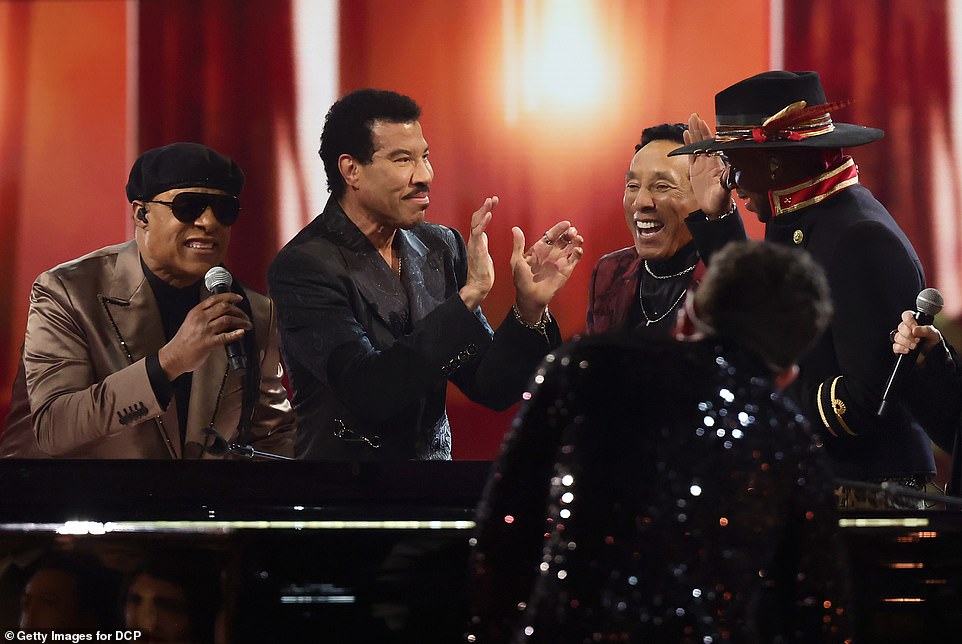 Touched: Richie was so moved by the performance that he ran up onto the stage to perform with the group

After the ‘Easy’ singer finished his speech, Stevie Wonder and Charlie Puth took to the stage for a performance which the younger artist jokingly described as a ‘musical tennis match of Lionel Richie copyright.’

The pair took turns to sing snippets of Lionel’s biggest hits at the piano, with Stevie, 72, noting: ‘This is a great night because we’re here to honour a great man.’

The ‘Superstition’ hitmaker covered the likes of ‘Three Times A Lady’, ‘All Night Long (All Night)’, ‘Brick House’, and ‘Jesus is Love’, while the 30-year-old singer tackled ‘Easy’, and ‘Say You, Say Me’.

They were then joined on stage by a host of other artists, including Smokey, Melissa Etheridge, Ari Lennox, Jimmie Allen, Yola, Dustin Lynch and Muni Long for a finale of ‘We Are The World’. 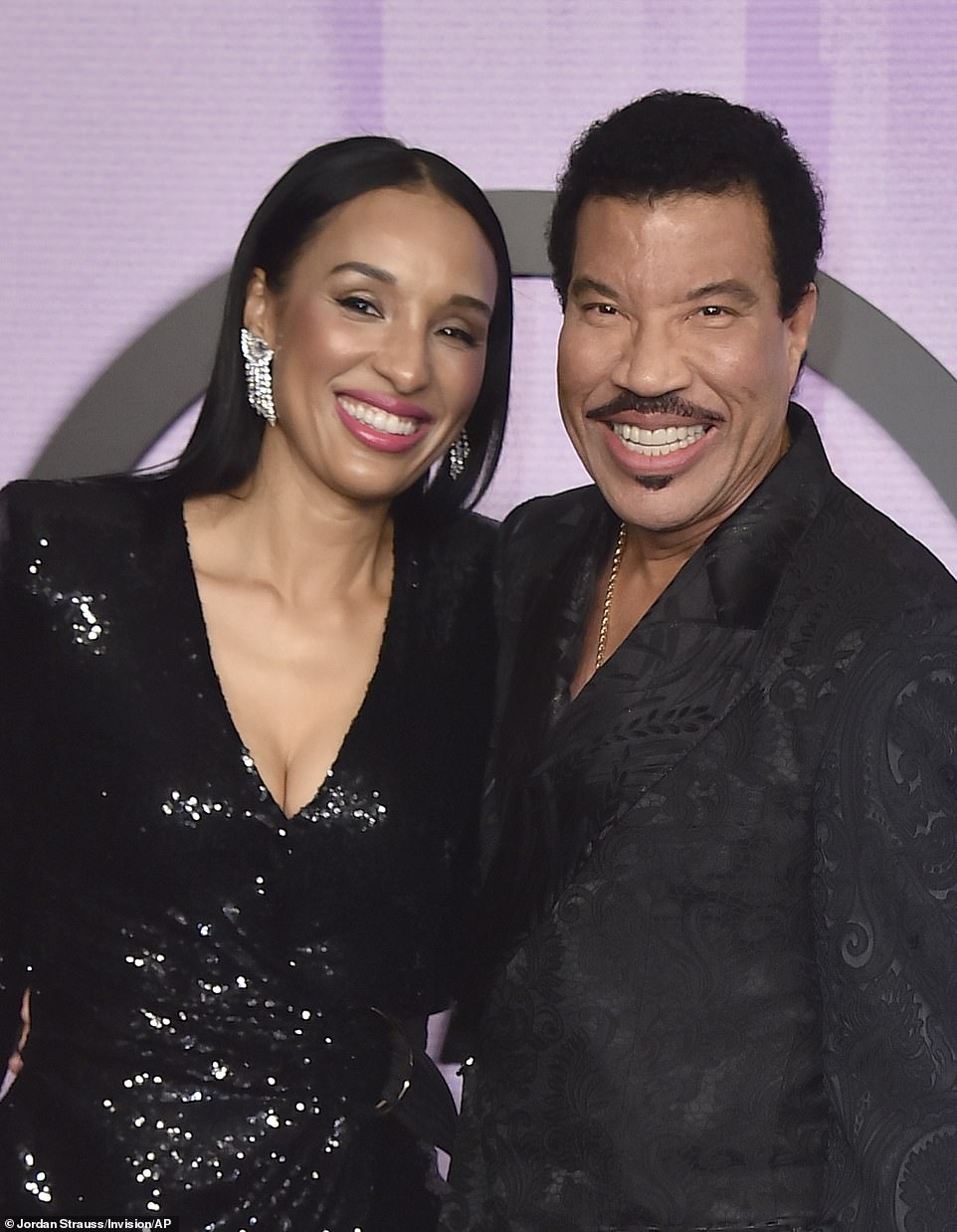 Big grins: The 73-year-old singer-songwriter and his 33-year-old lady love flashed huge grins at the event and cuddled up close as they posed up a storm 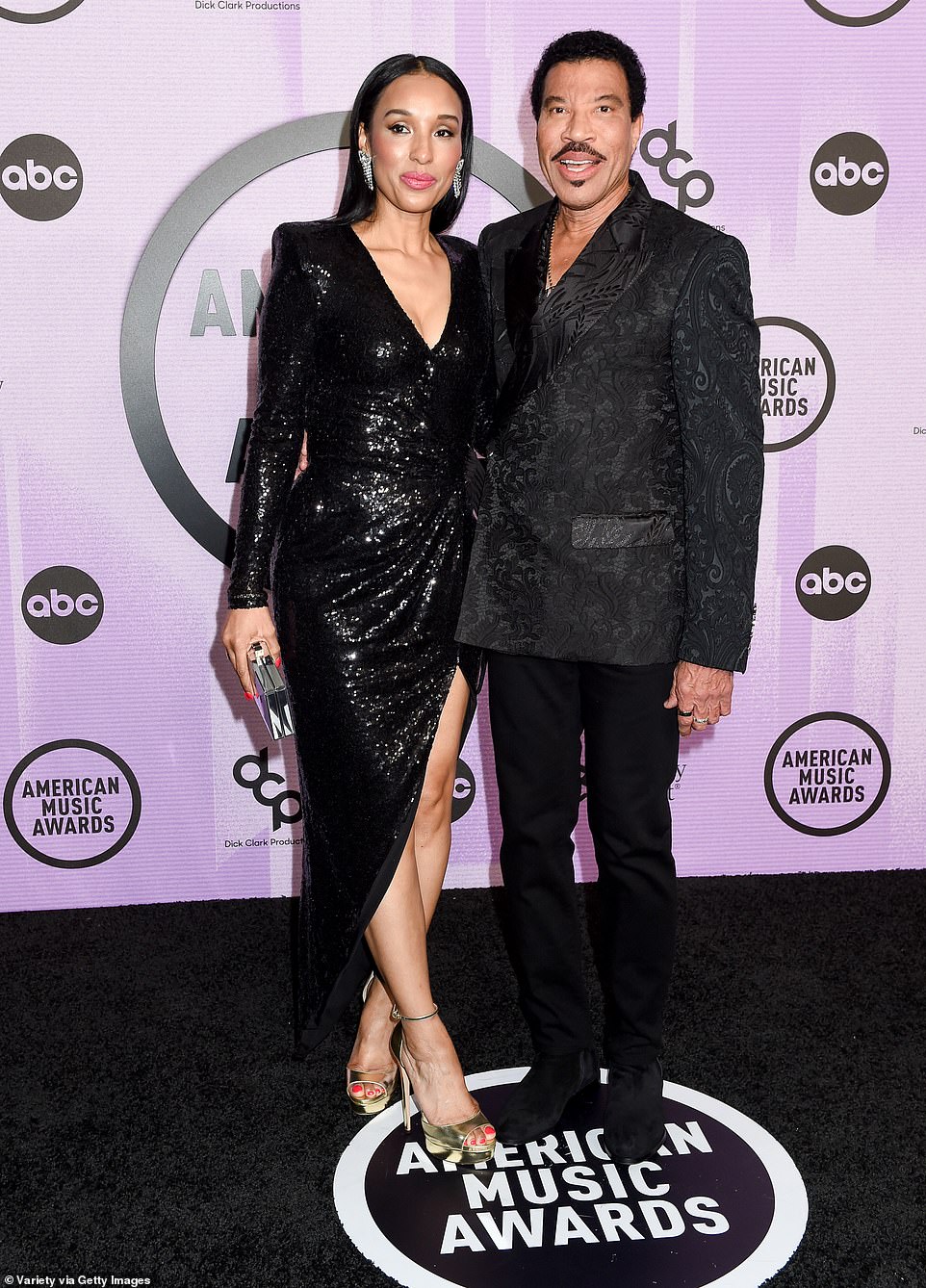 Gorgeous gown: The model and entrepreneur on Richie’s arm wore a sparkling black gown slit down the left side of the leg, revealing her long limbs

ARTIST OF THE YEAR: Taylor Swift

FAVORITE POP SONG: Harry Styles – As It Was 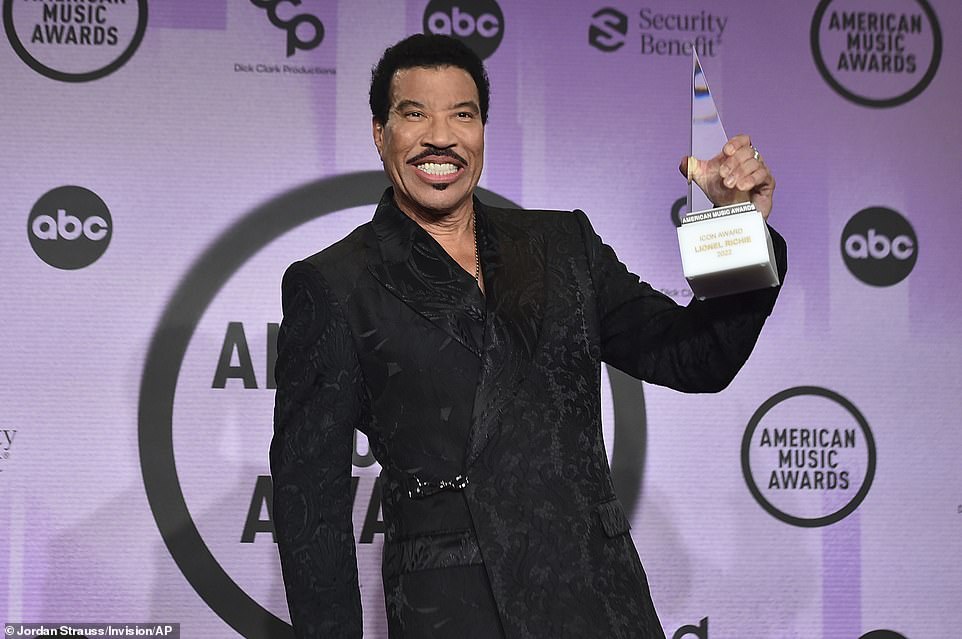 Honored: Lionel was awarded with the Icon Award at the event. He previously hosted the awards show in 1985 and 1986 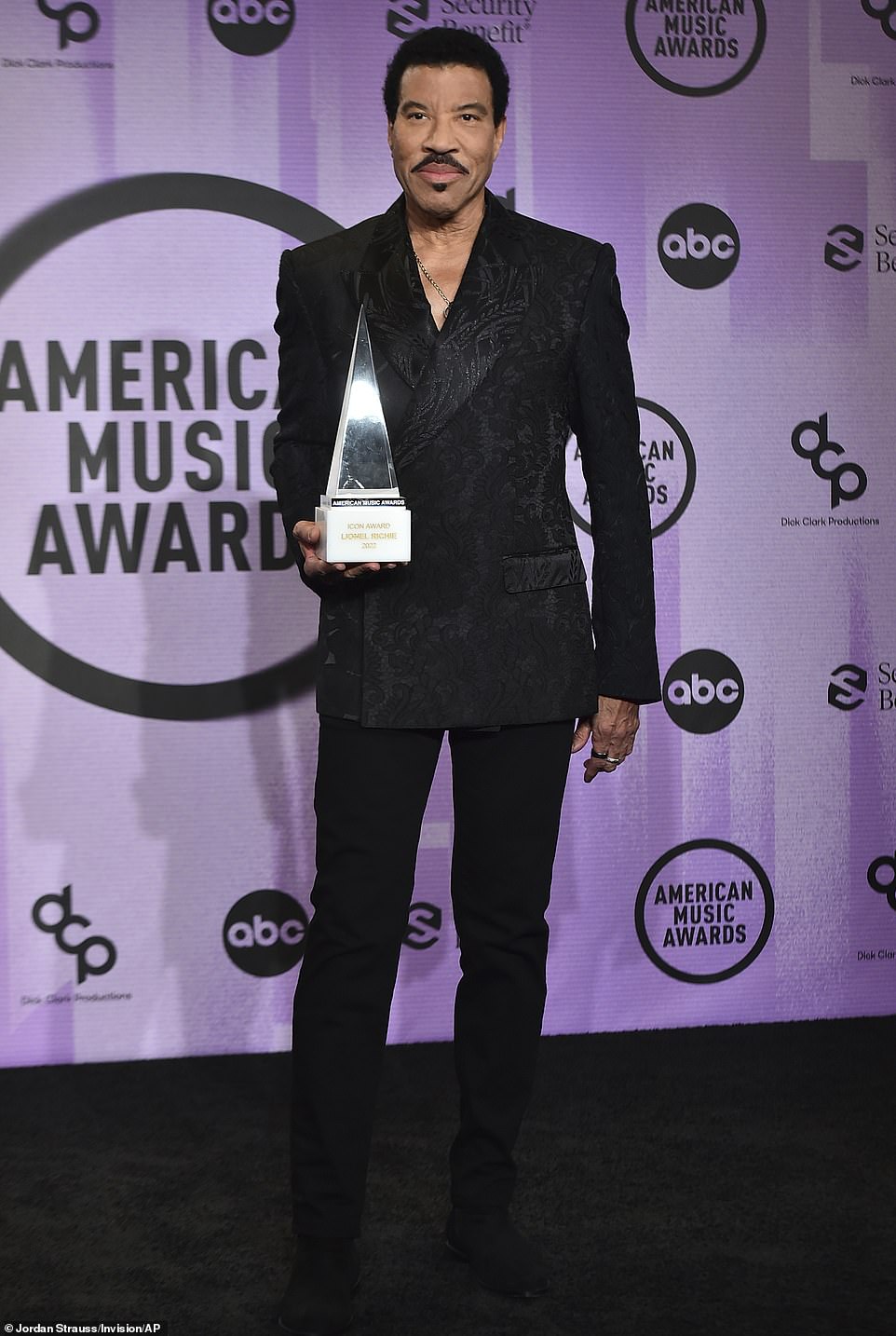 Lots of honors recently: The 17-time AMA winner was recently inducted into the Rock and Roll Hall of Fame as well. Rihanna won the first Icon Award back in 2013