Lionel Richie, 73, oozes iconic swagger beside glam girlfriend Lisa Parigi, 33, on the red carpet before being inducted into Rock & Roll Hall of Fame in Los Angeles

There were 14 musical artists inducted into the Rock and Roll Hall of Fame during the 37th annual ceremony at the Microsoft Theater in Los Angeles on Saturday, November 5.

Although he first shot to stardom as the co-lead singer for the legendary funk band the Commodores, Lionel Richie was among the class of 2022 to reach musical immortality as a solo artist.

Richie’s longtime girlfriend Lisa Parigi, who is 40 years younger than her beau, was by his side for their night in the spotlight. 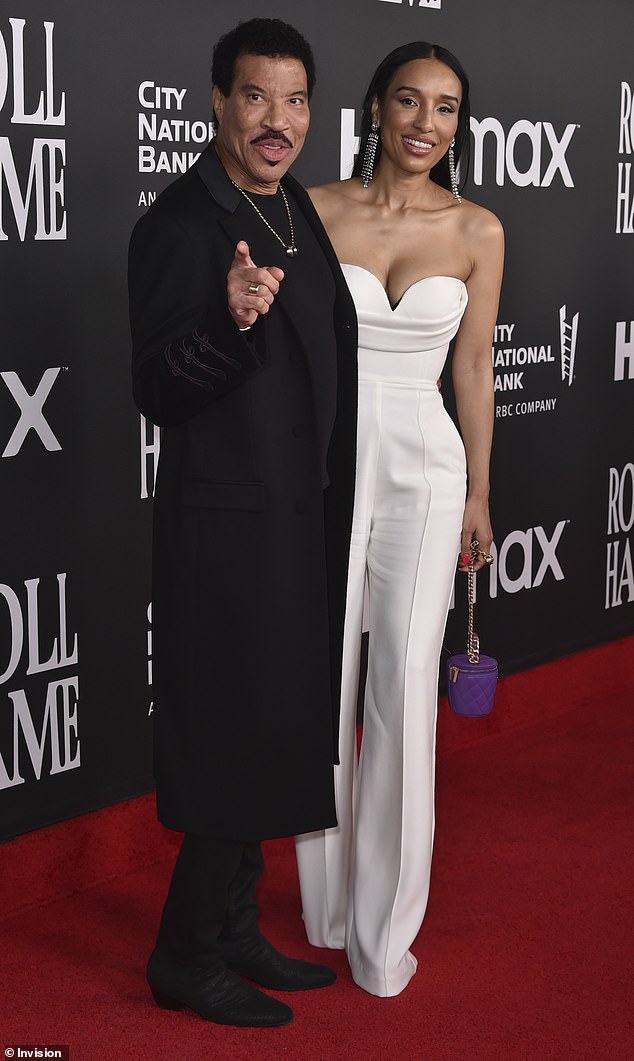 Music immortality: Lionel Richie, 73, had his longtime girlfriend Lisa Parigi, 33, by his side when he was among the 14 musical artists to be inducted into the Rock & Roll Hall of Fame at the Microsoft Theater in Los Angeles on Saturday

Richie, 73, looked much younger than his years decked out in fitted black pants with a matching top and overcoat.

He also wore black boots and accessorized with one gold chair around his neck and a couple of rings.

Flashing a proud and wide smile, the legendary musician had his arm around Parigi nearly the entire time they were on the red carpet.

The couple, who try to keep their romance very private, have been in a committed relationship since 2014, according to various publications including Hollywood Life. 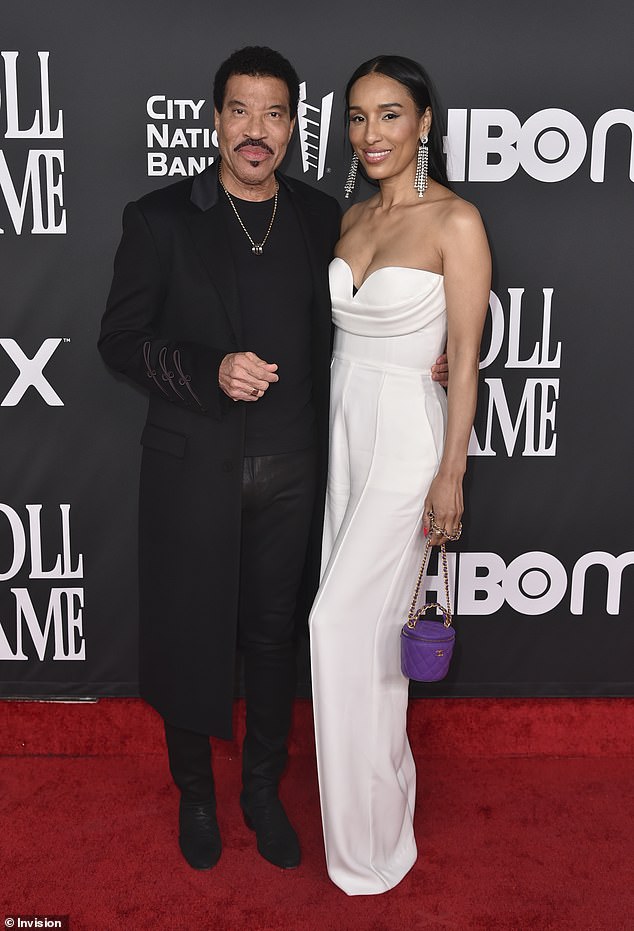 Elegant: Richie, who looked dapper in all-black, wrapped his arm around his lady, who was decked out in a white shoulder-less jumpsuit 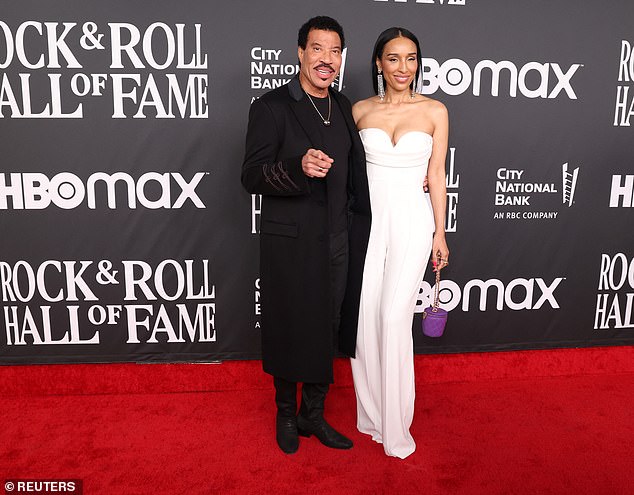 Going strong: The couple have been in a committed relationship since 2014

The model and designer, 33, showed off her statuesque figure decked out in a white shoulder-less jumpsuit that flared at the bottom of each leg.

Showing a flare for fashion, Parigi also carried a small but stylish purple purse, and accessorized with a pair of long dangling earrings.

She rounded out her overall look by having her raven tresses styled long, straight and flowing down her back with a part in the middle.

Dating now for about nine years, the couple don’t have any children together, but Richie does have three kids of his own from previous relationships. The singer and pianist adopted daughter Nicole, 41, with his first wife of 18 years, Brenda Harvey.

The American Idol judge also shares son Miles, 28, and daughter Sofia, 24, with his second wife Diane Alexander, to whom he was married from 1995 to 2003.

Parigi was born and brought up in Switzerland, and has worked as a model, a fashion designer and the brains behind the lifestyle blog Dream.Design.Discover. 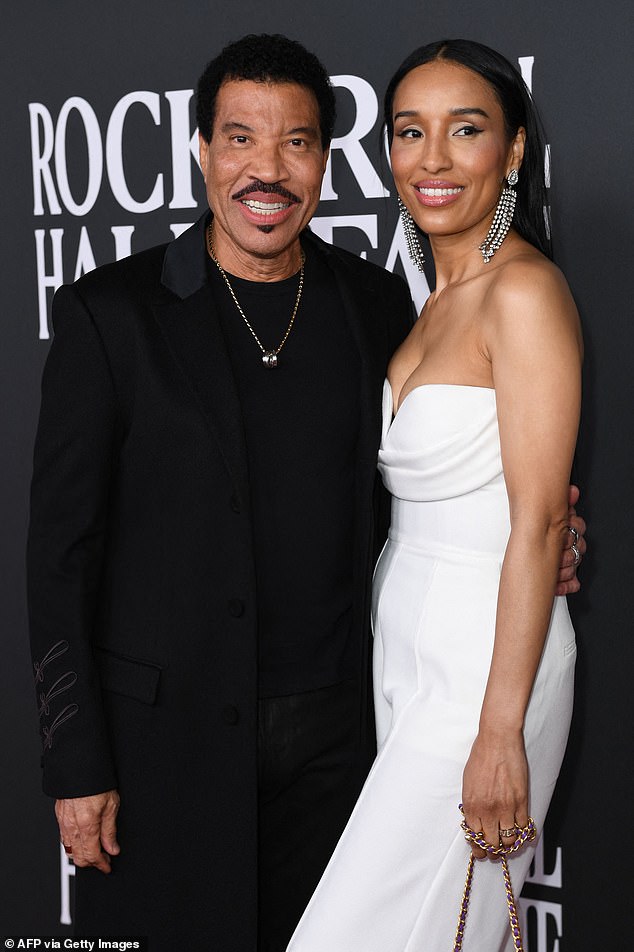 Shining stars: Richie and Parigi packed on the PDA while in the spotlight of the red carpet

‘She’s extremely beautiful, but most importantly she’s smart and helps me deal with my crazy world,’ the Three Times A Lady star gushed to People in 2019. ‘At this time in my life when you can be so jaded about things, [my girlfriend] Lisa kind of makes everything feel a bit safe.’

Originally intended to be a side project at the suggestion of his record company Motown, Richie dropped his self-titled debut solo album in 1982 while still a member of the Commodores.

The first single, Truly, topped the Billboard Hot 100, and the follow-up singles You Are and My Love reached number four and number five respectively, which helped propel the recording to sell over four million copies.

Hot off the success of his first solo effort, Richie left the Commodores and then  would see his sophomore solo album, Can’t Slow Down (1983), shoot him to global superstardom.

Spawning five hit singles: All Night long (All Night), Running With The Night, Hello, Stuck On You and Penny Lover, two of which that hit number one, Can’t Slow Down would also top the US Billboard chart and go on to sell more than 20 million copies.

Richie, whose third album Dancing On The Ceiling also hit number one, went on to became one of the most successful singer-songwriters of his era and of all time.

In all, the Tuskegee, Alabama native has released 10 studio albums, with the most recent being Tuskegee (2012), resulting in the sale of over 100 million records worldwide, making him one of the the best-selling musical artists of all time. 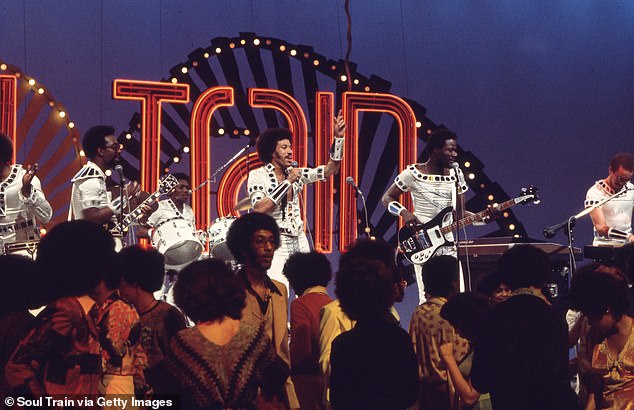 The Brick House: Richie first gained fame as the co-lead singer of the funk band Commodores; the funk masters are seen on Soul Train in 1976 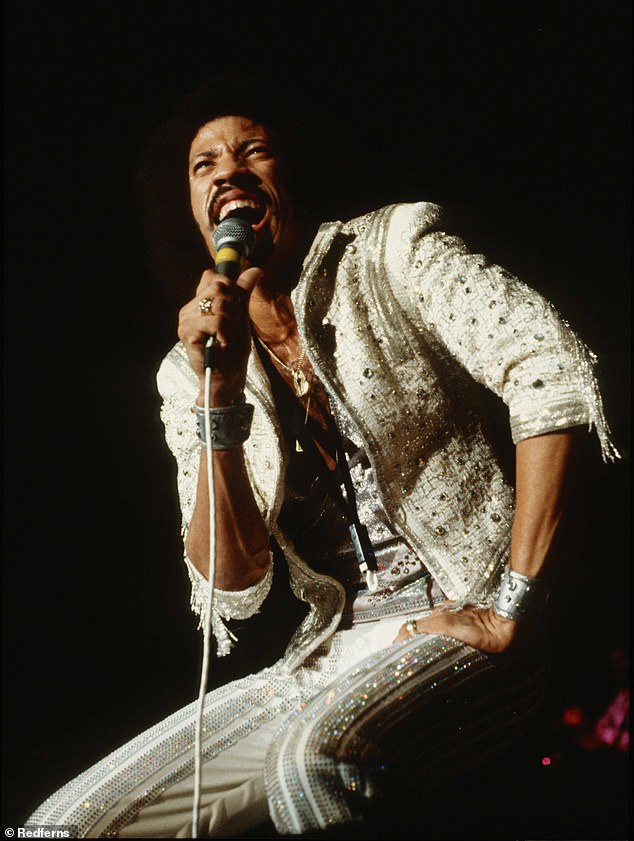 Funk masters: When Richie was with the Commodores they had a number of hits including Easy, Brick House, Three times a Lady, Nightshift, Fancy Dancer, Lady (You Bring Me Up) and Too Hot ta Trot; he is pictured in 1969

Among his many accolades, Richie has won four Grammy Awards, including Song Of The Year for the charity single We Are The World, which he co-wrote with Michael Jackson, and Album Of The Year for Can’t Slow Down.

Along with Richie, the other 2022 Rock & Roll Hall of Fame inductees in the Performer Category include Pat Benatar, Duran Duran, Eminem, Carly Simon, Eurythmics and Dolly Parton

Judas Priest and Jimmy Jam & Terry Lewis got in under the Musical Excellence Award, while Harry Belafonte and Elizabeth Cotten made it into the hallowed halls under the Early Influence Award.

And Allen Grubman, Jimmy Iovine and Sylvia Robinson enter the hall through the Ahmet Ertegun Award.

While the ceremony went off on November 5, fans will be able to watch it in its entirety in two weeks when it airs on HBO and HBO Max on November 19 at 8 p.m. EST. 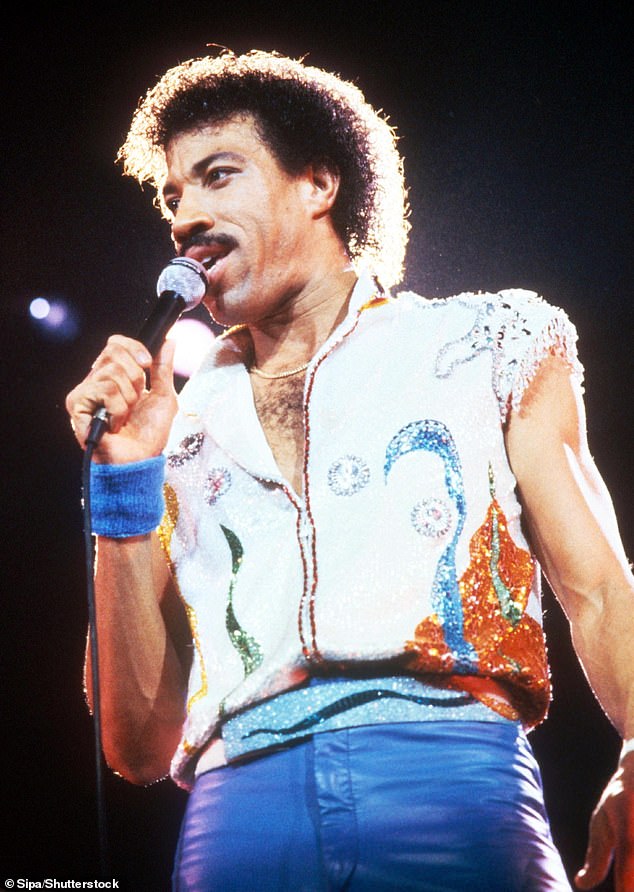 Massive solo success: Richie left the Commodores in 1982 and went on to become a hitmaker starting with his first three solo studio albums: Lionel Richie, Can’t Slow Down and Dancing On The Ceiling; he is pictured playing live in 1984