Love Island stars Maura Higgins and Lucie Donlan stunned in all-black ensembles as they enjoyed a night out in London.

The pair looked glamorous as they left a hotel in Mayfair, London, on Monday night after lockdown restrictions across England were lifted.

Maura, 30, appeared to be putting her recent breakup with ex-boyfriend Chris Taylor, 30, behind her as she gave onlookers a beaming smile during her first night out since confirming the split. 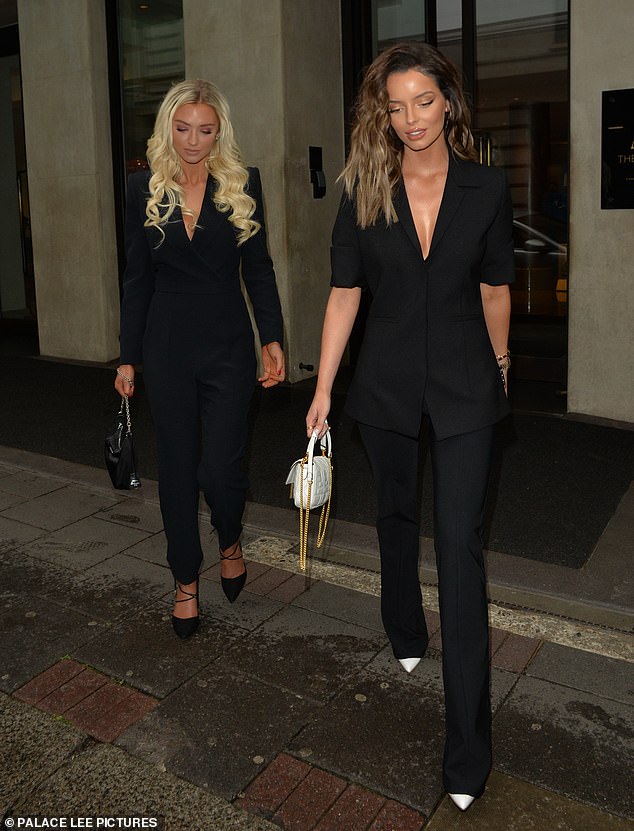 Twinning: Maura Higgins and Lucie Donlan stunned as they stepped out in London on Monday wearing black outfits to celebrate the Irish star’s footwear collaboration with EGO footwear

The former Islanders were out to celebrate the launch of Maura’s new shoe collection she designed in collaboration with EGO footwear.

Maura wore a black suit, which had a plunging neck line showcasing her cleavage.

She paired the look with a small white handbag and matching pointed-toe heels from her new collection.

The influencer wore her hair in a light wave and draped it over one shoulder and the rest flowed down her back. 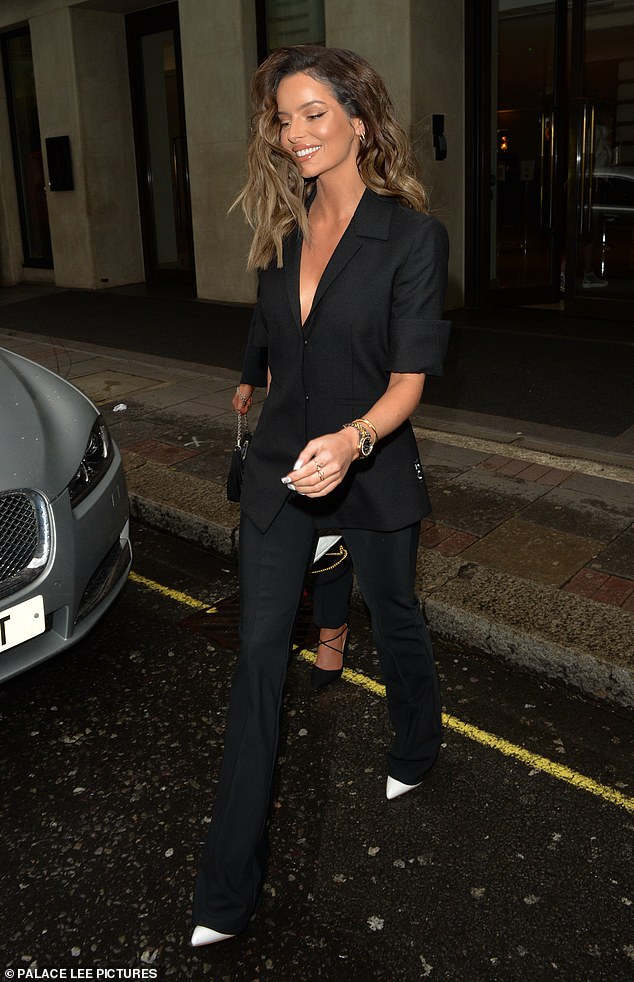 Chic: Maura, 30, beamed with happiness as she made her way to the celebratory dinner alongside close pal Lucie, who she met on the 2019 series of Love Island 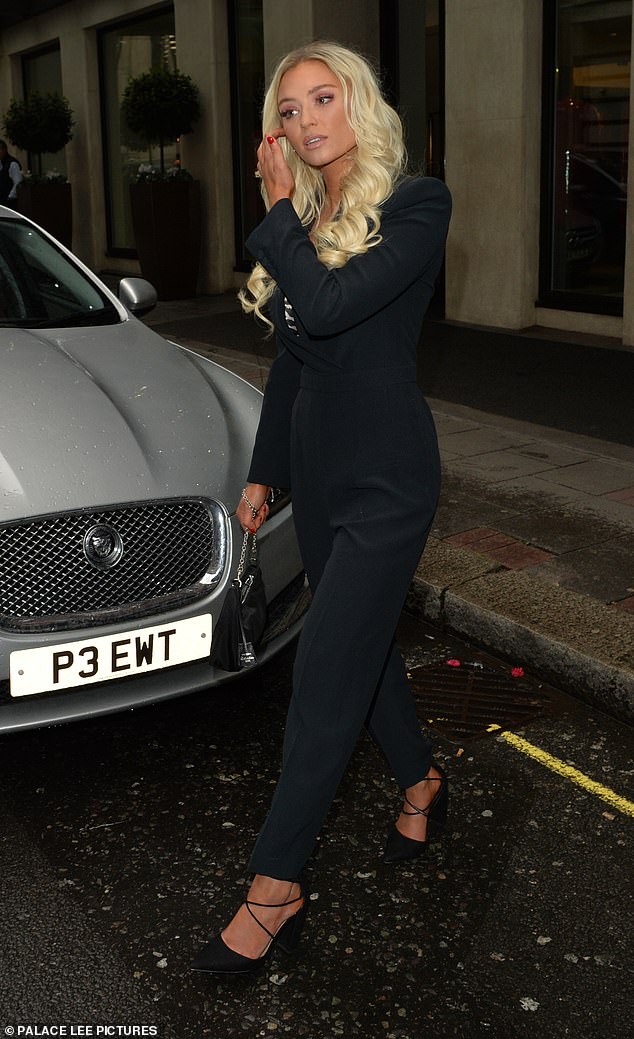 Glamorous: Lucie, 23, looked gorgeous in a sophisticated black trouser suit as she joined Maura for their first night out post-lockdown

Lucie, 23, opted for a similar look wearing an all-black jumpsuit, which had large shoulder pads and a low neckline.

In contrast to pal Maura, she chose a small black handbag and a pair of elegant black stilettos, also from her pal’s new collection.

She wore her curled long blonde locks parted in the middle.

Their appearance comes just weeks after Maura announced her split from her ex-boyfriend Chris.

Maura and Chris went public with their romance in November 2020 after months of speculation they were dating and took to Instagram two weeks ago to confirm they had split. 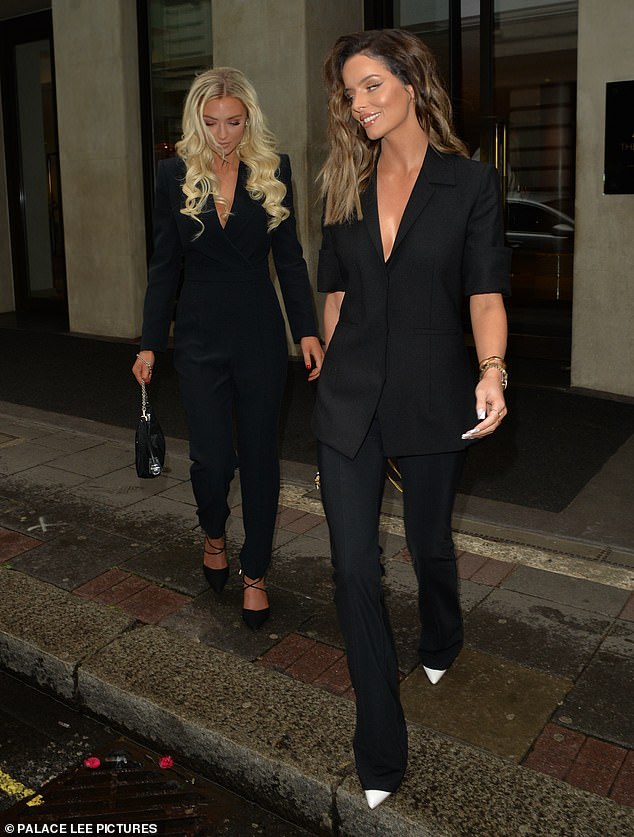 Twinning: They braved the wet weather in London for the outing, both choosing to wear pointed-toe heels for the event 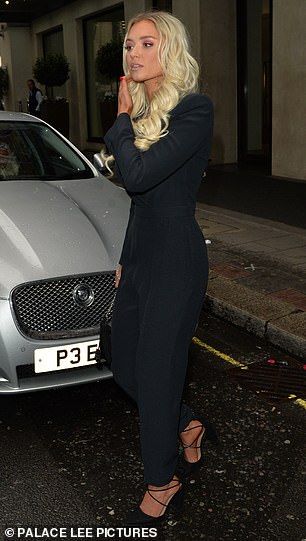 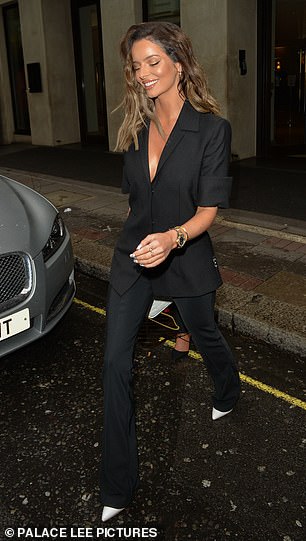 Stylish: The former Islanders accessorised their look with small handbags and both curled their hair for the outing Staying dry: The pair shielded themselves from the rain by gathering under an umbrella as they hit London town together for the first time this year

Maura temporarily moved in with close pal Molly-Mae Hague, 21, and her boyfriend Tommy Fury, 22, who both supported her following her split from Chris.

The two enjoyed several spa days together in Manchester, as they relaxed in any way possible amid the rainy weather.

Molly was also out on Monday, joining Maura, Lucie, Francesca and Joanna for the glamorous dinner.

She wore a black mini dress with a plunging neckline and her blonde hair in a tight bun. 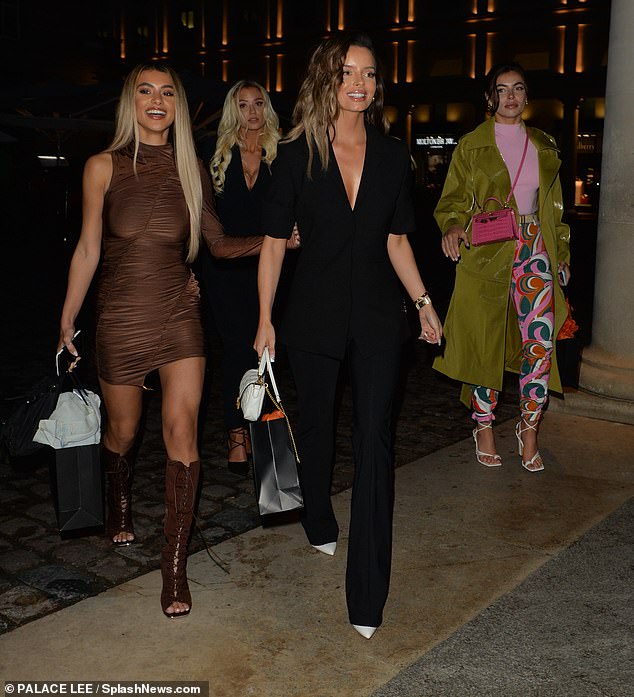 Friends: Maura was joined by other Love Island pals Francesca Allen and Joanna Chimonides for the launch of her new shoe collection 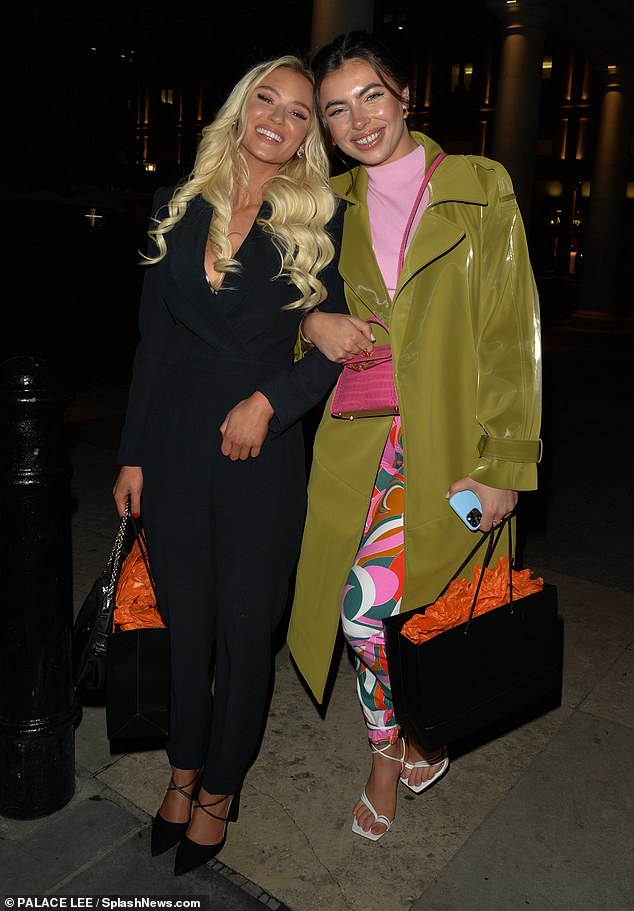 Show of support: Lucie and Francesca showed their support for Maura’s new collection with EGO footwear by wearing a pair of shoes from her collaboration on Monday night 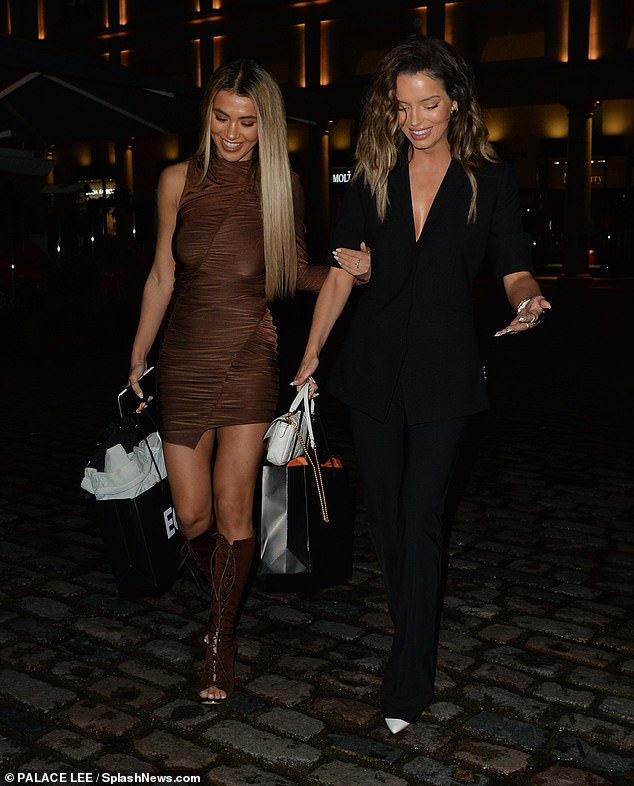 Great turnout: Maura and Joanna laughed together as they tackled the cobbled streets in their high heels

Maura and Chris announced their split at the same time on Instagram.

‘It breaks my heart to even type this but I wanted to let everyone know that myself and Chris have made the joint decision to end our relationship,’ Maura said in an emotional statement.

‘There is no wrongdoing on either side… we still love, care and respect each other deeply.

‘From the minute we met each other we’ve been very close friends and that will never change. There is no regret, life is about taking chances.

‘We wanted to make this work but we have realised we work better being friends. Whilst I appreciate people may speculate or create false stories this is the truth. 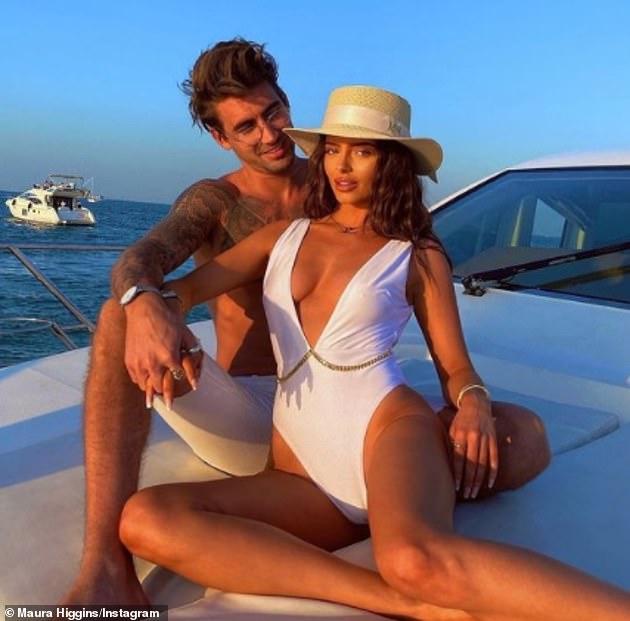 Happier times: Maura and Chris went public with their romance in November after months of speculation they were dating but took to Instagram two weeks ago to confirm they had split

‘I wish Chris nothing but the best and I will always be one of his biggest supporters. Thank you for all the love and support’.

Meanwhile, the statement released by Chris read: ‘Hey guys, after some very heartfelt conversations over the past few days, myself & Maura are very sad to announce that we have decided to part ways.

‘We are both still on very good terms and this was a mutual decision where nobody had done anything wrong. We will remain friends, as we have been since day one and I will always be in Maura’s corner and have her back…

‘We are both going through a very tough time with this at the moment, so please take any speculation with a metric tonne of salt, p.s this is the only truth (and as always trolls can kindly f*** off)… 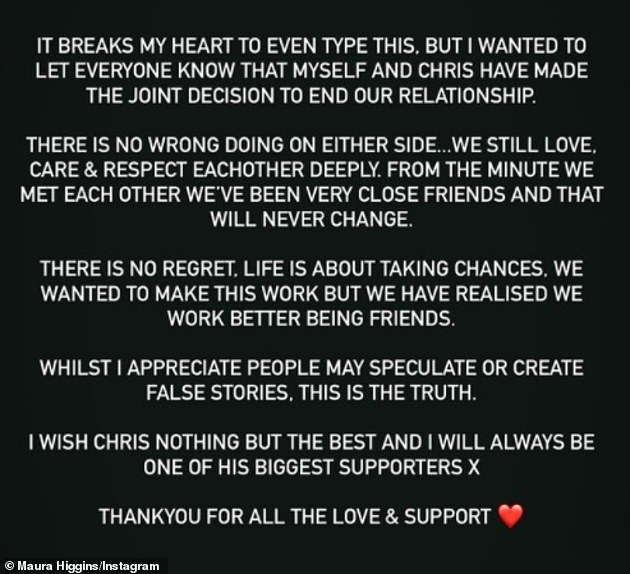 Impassioned: The Irish beauty penned: ‘It breaks my heart to even type this but I wanted to let everyone know that myself and Chris have made the joint decision to end our relationship’ 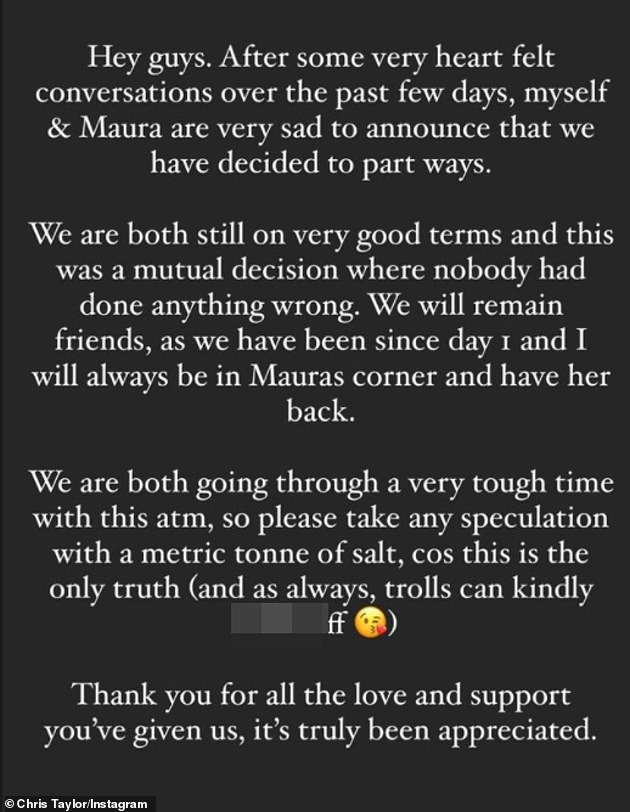 ‘We are both going through a very tough time’: Chris released statement saying him and Maura will always ‘remain friends’ and he will always have his ex-girlfriend’s ex

‘Thank you for all the love and support you’ve given us, it’s truly been appreciated’.

Just two weeks before the announcement, Maura spoke to MailOnline about the prospect of marriage and how happy they were together.

‘Like every couple we have our bickers, he does silly things like leaving the fridge door open. We have spoken about getting married – we’ve often spoken about where would we like to get married and would I like Ireland or England, stuff like that…

‘I do feel like I’d probably want an Irish wedding, which is a crazy, big party. I’ve had an image in my head for years but everyone I know that’s got married always says ‘you’ll never wear what you thought.’ I’d like something very simple…

‘I don’t feel like I’m going to even cover up on my wedding day!’ 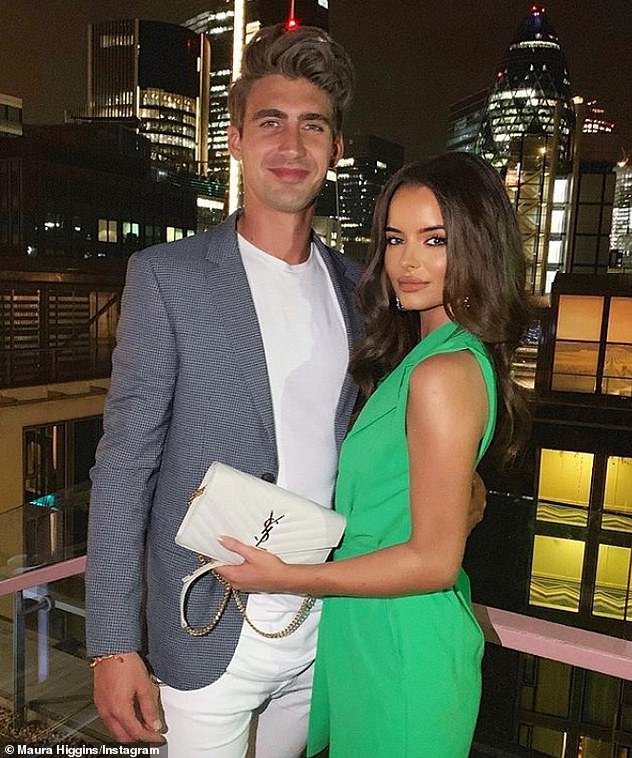 Exes: Just two weeks before the announcement, Maura spoke to MailOnline about the prospect of marriage and how happy they were together