Madonna took daughter Mercy James to an exhibition honouring the late Tupac Shakur – whom she dated in the Nineties.

The singer, 63, attended the interactive exhibit in Los Angeles with her 16-year-old daughter on Sunday in a bid to to educate her on ‘his love of books, words and poetry’.

The exhibition features never before seen artifacts from Tupac’s personal archives – but not the controversial items relating to Madonna that she previously filed to stop being sold at auction.

In 2018, Madonna lost a legal battle to remove more than 100 items from sale, including a letter the rapper sent her from prison, a pair of her knickers, an old checkbook, a hairbrush and personal photos. 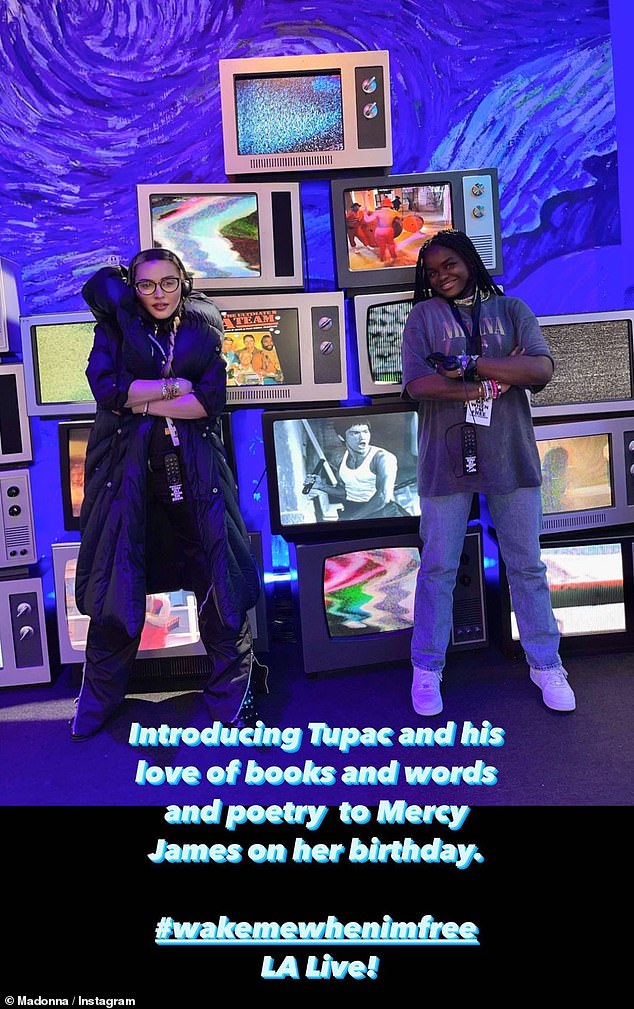 Tupac was gunned down and killed in a drive-by shooting in Las Vegas in September 1996, a year after he enjoyed a brief dalliance with the Rebel Heart singer.

Documenting her trip on Instagram, Madonna penned:  ‘Introducing Tupac and love of books and words and poetry to Mercy James on her birthday, #wakemewhenimfree LA Live!’

In the first photo of the pair, Madonna (born Madonna Louise Ciccone) was seen standing in front of one of media exhibits with her arms crossed.

The Like A Prayer star dressed in a long coat and sweatpants, donning a pair of black-frame glasses with her dyed blonde tresses styled into braids.

Mercy James mimicked her mother by crossing her arms dressed in a faded black Nirvana T-shirt with light blue jeans and white sneakers. 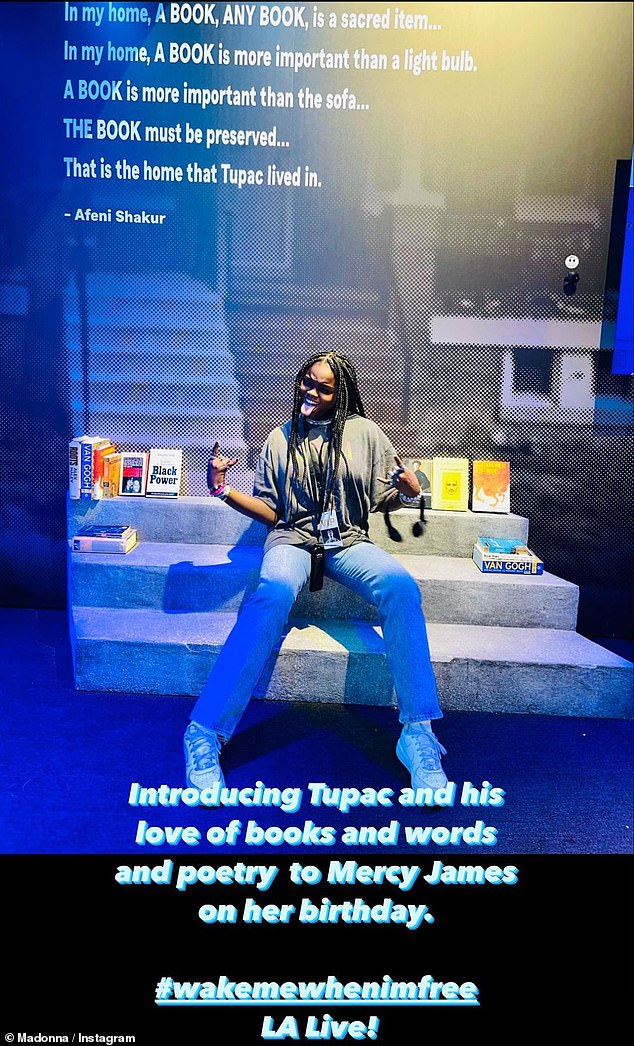 Introduction to his artistry: The proud mother says she wanted to educate Mercy on Shakur’s ‘love of books, words, and poetry’

The mother-daughter duo also kneeled down in the part of the exhibit that showcases the many poems and song lyrics Tupac wrote out in his own handwriting.

It’s part of a room dedicated to all of his written works, which includes about 280 pieces of paper, in Shakur’s signature handwriting, from screenplays to poems to early songs.

The Rebel Heart singer-songwriter also struck a pose in front of a large image of the late rap superstar. 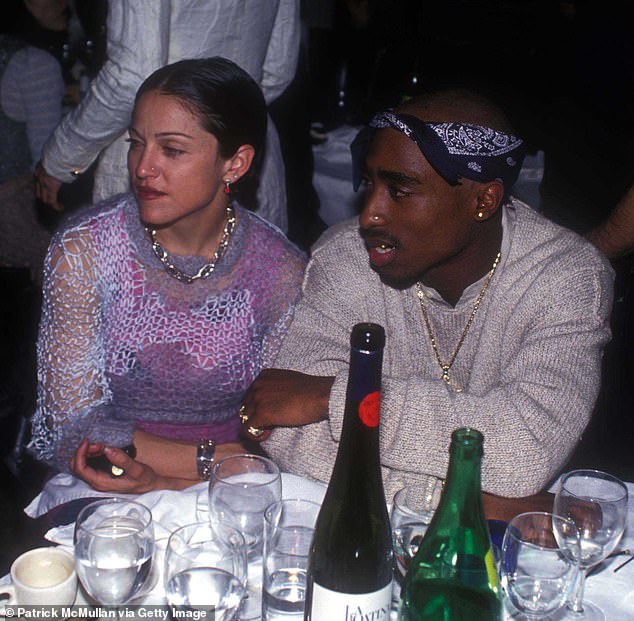 Exes: Madonna and Tupac dated from 1993 to 1995, with a love letter from the rapper revealing that he called time on their relationship due to the fact she was white (pictured in 1994)

Madonna and Tupac dated from 1993 to 1995, with a love letter from the rapper revealing that he called time on their relationship due to the fact she was white.

After Madonna lost her long-winded legal battle to halt it from being sold, the love letter finally hit the auctioneers block in July 2019.

The break-up letter from the late rap star, dated January 1995, reveals he ended their relationship because he feared dating a white woman could jeopardize his career.

In June 2019, the New York State Appeals Court ruled Madonna couldn’t sue her former friend Darlene Lutz for selling the letter to an online auction house after she filed for an emergency court order to stop the sale of letters, photos, a hairbrush, and even a pair of panties that she had once worn.

A Manhattan Supreme Court judge ruled that Madonna’s former friend Darlene Lutz could give the items to auction house Gotta Have It Collectibles. 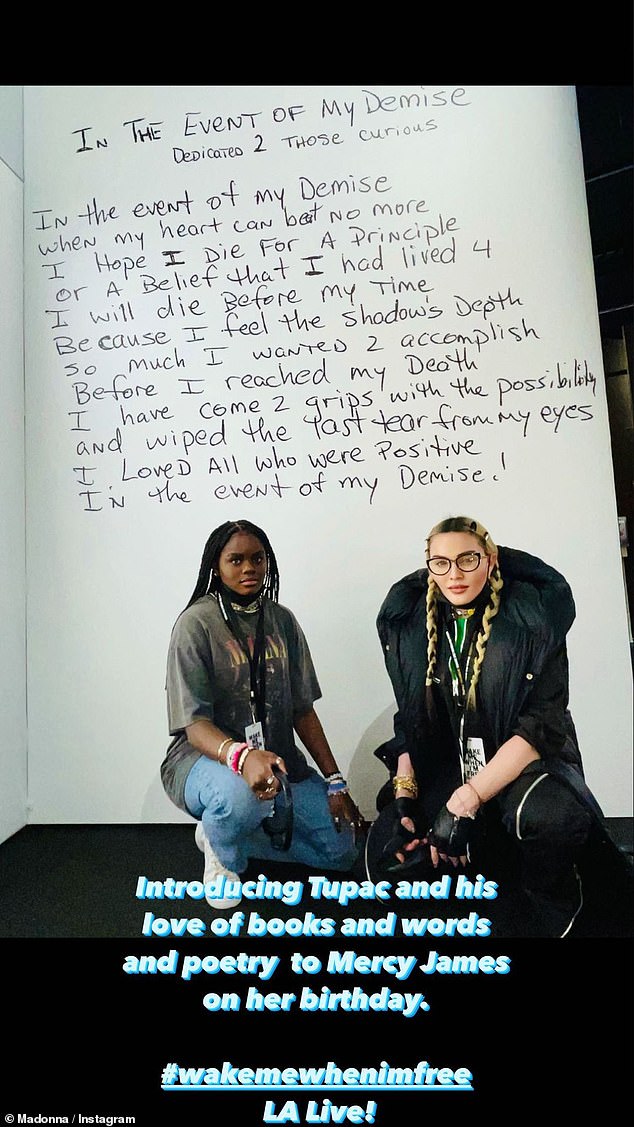 Sharing the moment: The Like A Prayer star also stuck a pose with her daughter in the gallery that showcases the legendary hip hop star’s many poems and lyrics 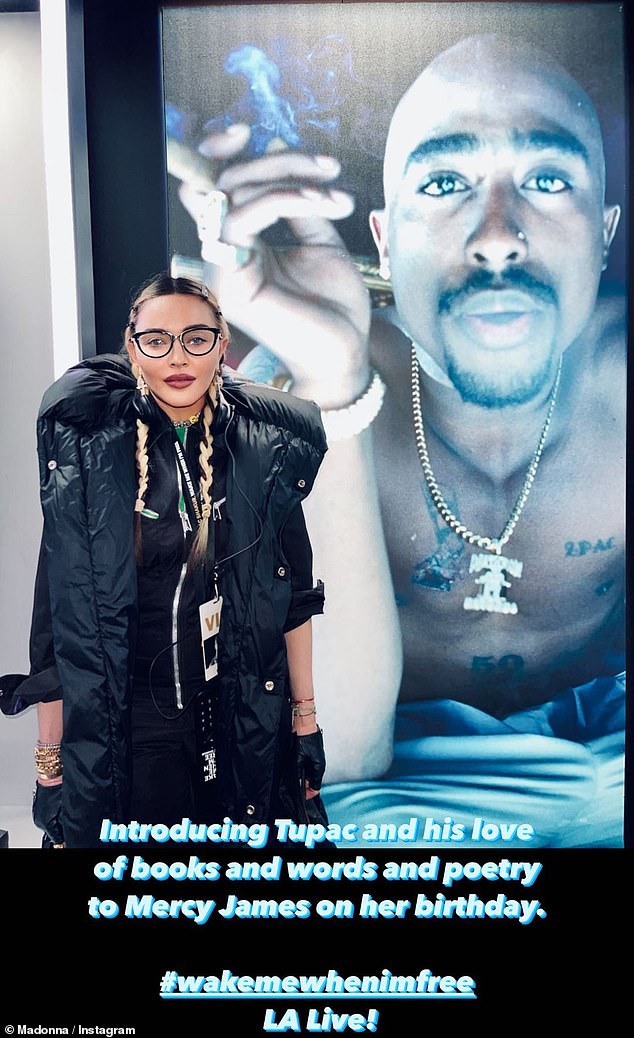 Snap happy: The Rebel Heart singer-songwriter also posed in front of a large photo of Shakur

Shakur began the letter by apologizing to Madonna, writing: ‘I haven’t been the kind of friend I know I’m capable of being’.

‘For you to be seen with a black man wouldn’t in any way jeopardize your career, if anything it would make you seem that much more open and exciting,’ he wrote later in the letter.

‘I felt due to my “image” I would be letting down half of the people who made me what I thought I was. I never meant to hurt you.’

Shakur also brought up an interview Madonna had given, in which she said she would ‘rehabilitate all the rappers and baseball players’.

‘Those words cut me deep seeing how I had never known you to be with any rappers beside myself,’ Shakur wrote.

‘It was at this moment out of hurt and a natural instinct to strike back and defend my heart and ego that I said a lot of things.’ 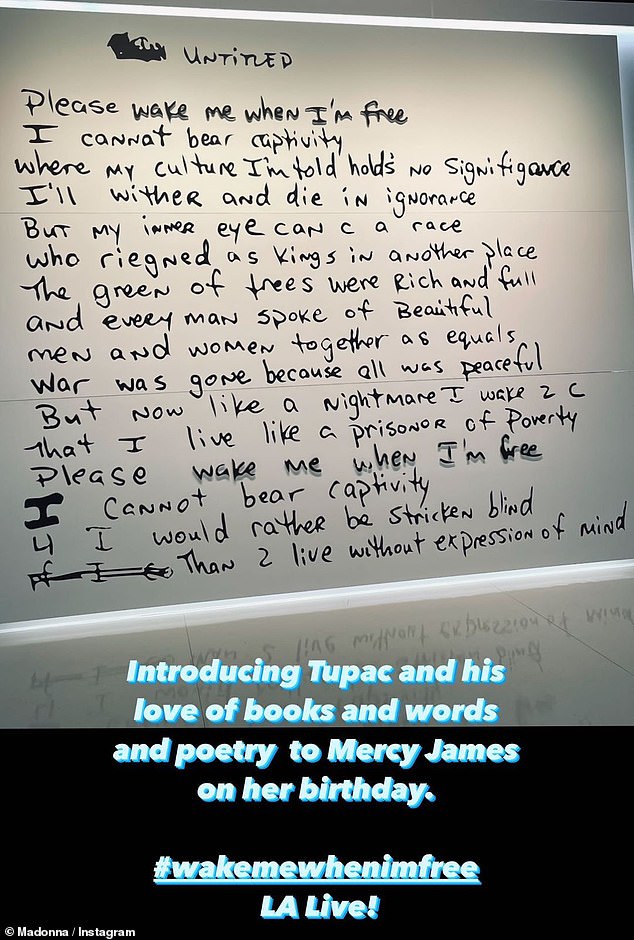 More works: Madonna posted more words written out by Shakur in his own handwriting 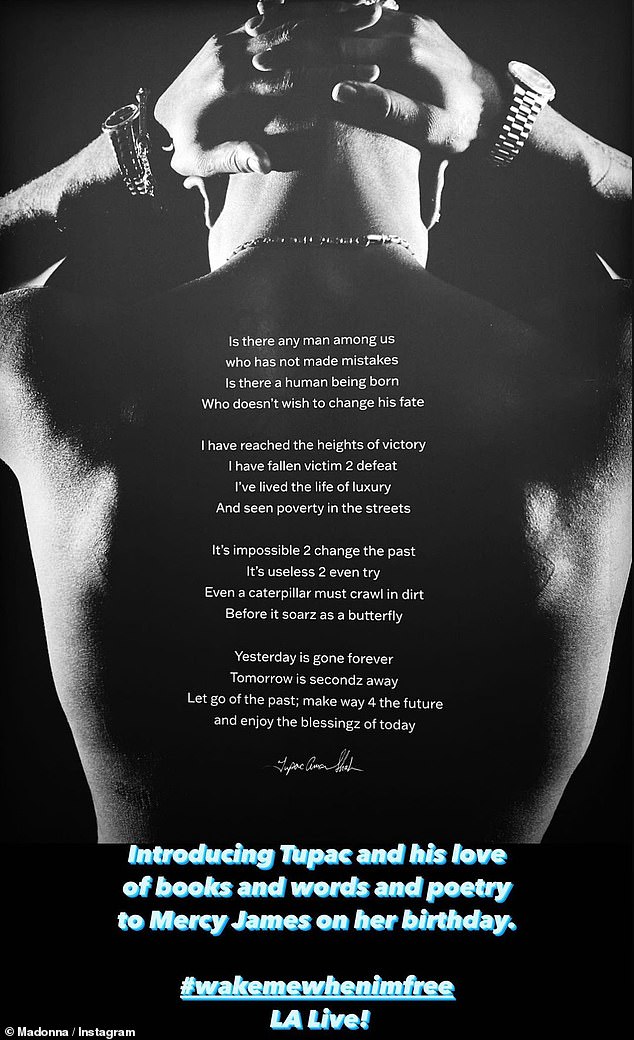 Mother’s touch: How the portrayal of one of rap’s foremost artists was portray was largely due to his mother, Afeni Shakur, who has since passed away in 2016

Shakur wrote that he had since grown ‘both spiritually and mentally’.

‘It no longer matters how I’m perceived,’ he said. ‘Please understand my previous position as that of a young man with limited experience with an extremely famous sex symbol.’

‘I offer my friendship once again, this time much stronger and focused. If you are still interested would like to further discuss this with you, but some of it couldn’t wait.’

‘I felt compelled to tell you…just in case anything happened to me.’

Shakur was only 25 when he was killed in a drive-by shooting in Las Vegas in September 1996. 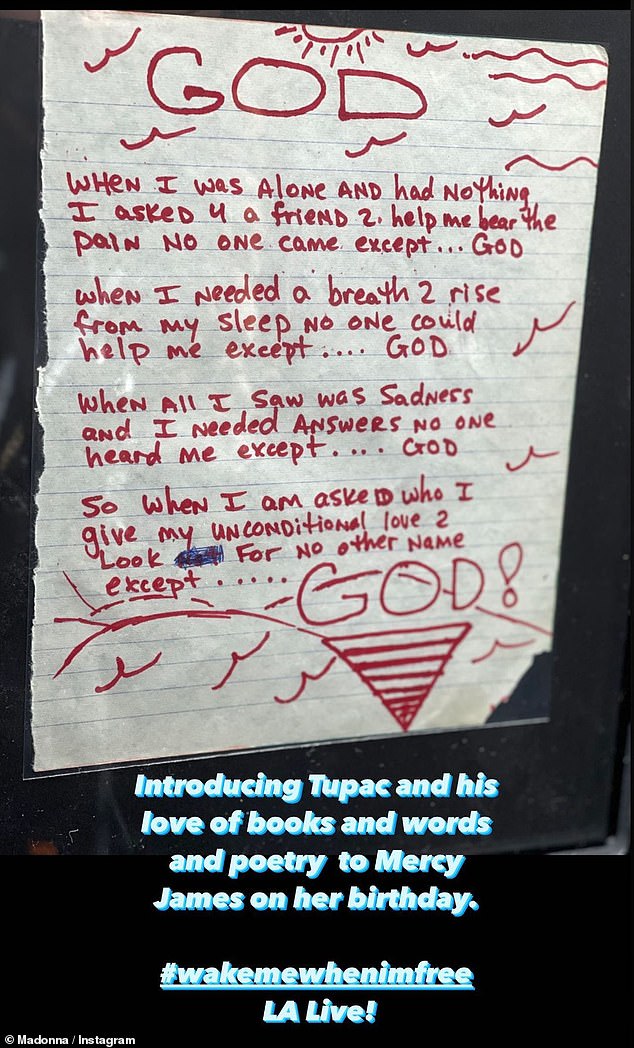 Deep thoughts: Madonna posted one of the late Shakur’s poems about God

Madonna’s personal items were consigned to auction by Lutz, who the pop star described in court documents as a former friend and art consultant.

She claimed Lutz had ‘betrayed my trust in an outrageous effort to obtain my possessions without my knowledge or consent’.

‘The fact that I have attained celebrity status as a result of success in my career does not obviate my right to maintain my privacy,’ she added.

But a judge ruled that Madonna had forfeited her right to the items after signing a 2004 settlement agreement with Lutz following a nasty dispute.

‘(Madonna) knew that throughout her relationship with Lutz, Lutz was in possession of various pieces of (Madonna’s) personal property’, the judge wrote in his decision, obtained by the New York Daily News.

‘Yet before this action began, the plaintiff did not make any demand to return her possessions.’ 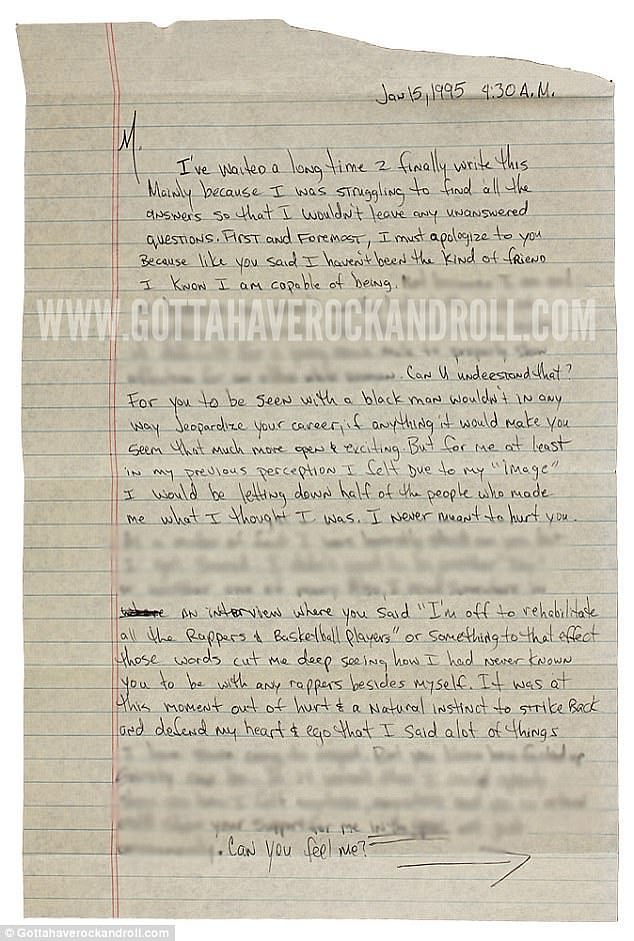 Handwritten note: By the time the letter was written in 1995, things had clearly taken a turn between the A-list duo 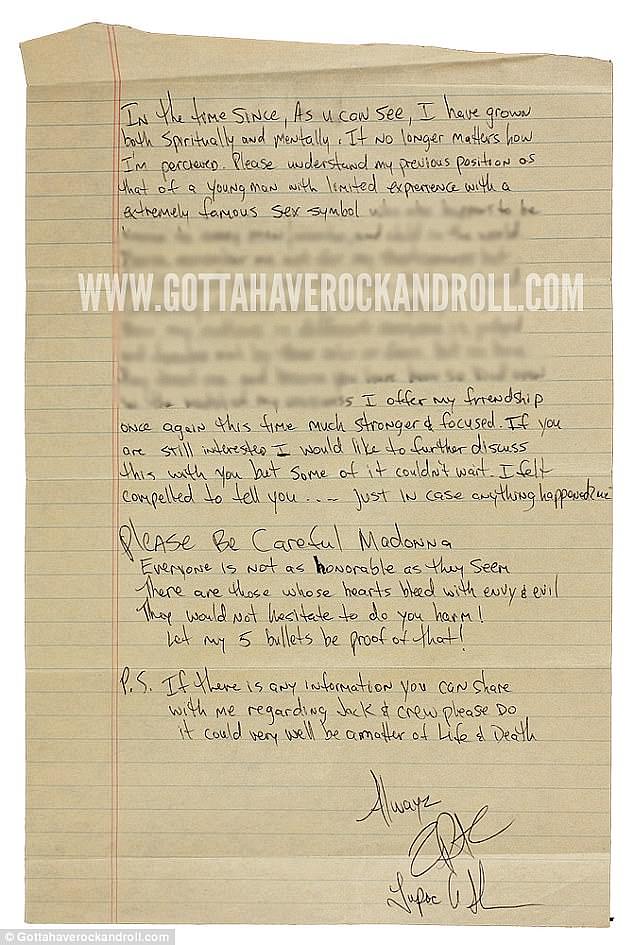 Emotional: Keen to give his side of the story to the apparent breakdown in their relationship, Tupac’s note began, ‘I’ve waited a long time 2 finally write this’

Madonna has maintained that she did not know Lutz was in possession of the items until news of the auction became public.

The judge also suggested that Madonna should have sued her estranged brother Christopher Ciccone, who gave some of the pop star’s items to Lutz.

In another letter up for auction, which was written in the early 1990s, Madonna wrote to former boyfriend John Enos: ‘It’s so unequivocally frustrating to read that Whitney Houston has the music career I wish I had and Sharon Stone has the film career I’ll never have.’

‘Not because I want to be these women – because I’d rather die, but they’re so horribly mediocre and they’re always being held up as paragons of virtue (or) some sort of measuring stick to humiliate me.’

Houston drowned in a Beverly Hills hotel bathtub in 2012.

Stone later wrote in a Facebook post that she is a friend of Madonna, adding: ‘I love and adore you; won’t be pitted against you by any invasion of our personal journeys.’

Shakur’s mother, Afeni Shakur, who passed away in 2016, was key to curating the exhibition celebrating his life and work.

Before her death, she worked with organizers to make sure the exhibit examined things like her son’s activism— and how he was ‘doing God’s work,’ according to The Undefeated.

And while Wake Me When I’m Free documents Shakur’s time in the studio, and the artistry he produced, although sometimes controversial, the true intention of the interactive tour is to peel back the layers on his early life and its revolutionary roots.

There are also different galleries that highlight the revolutionary life he was born into with his mother, and their association with the Black Panthers, as well as a ‘prison experience’ that brings to light Shakur’s time in a maximum-security penitentiary. 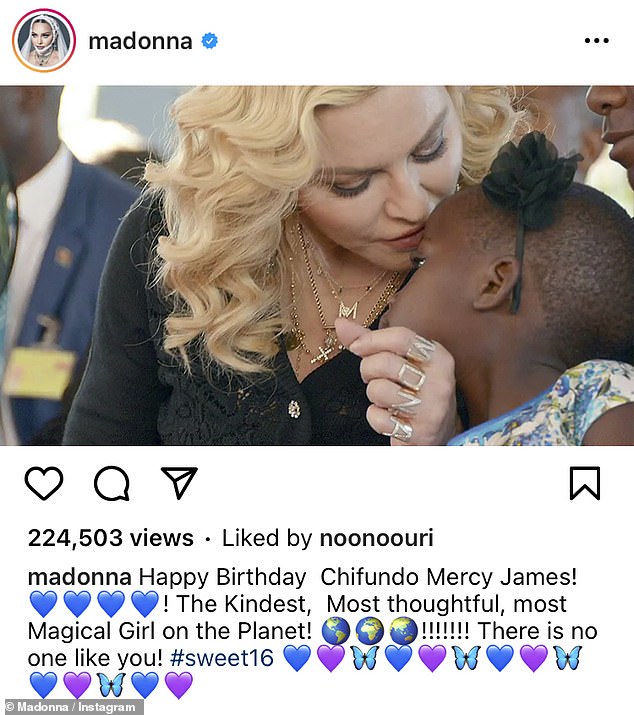 Sweet: One day earlier, Madonna marked Mercy’s birthday by posting a video on Instagram that captures some of the special moments they have shared together over the years 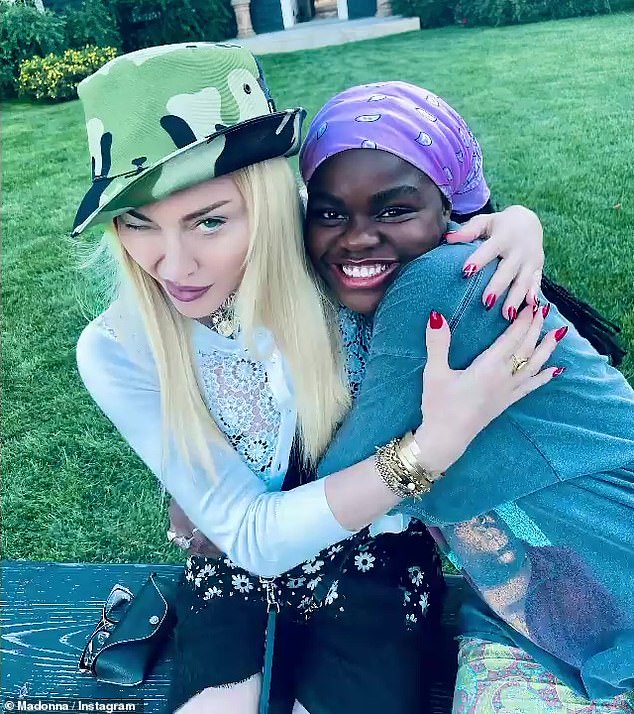 Gushing: The artist called Mercy one of ‘The Kindest, Most Thoughtful, most Magical Girl’s on the Planet’ in the caption of the video montage 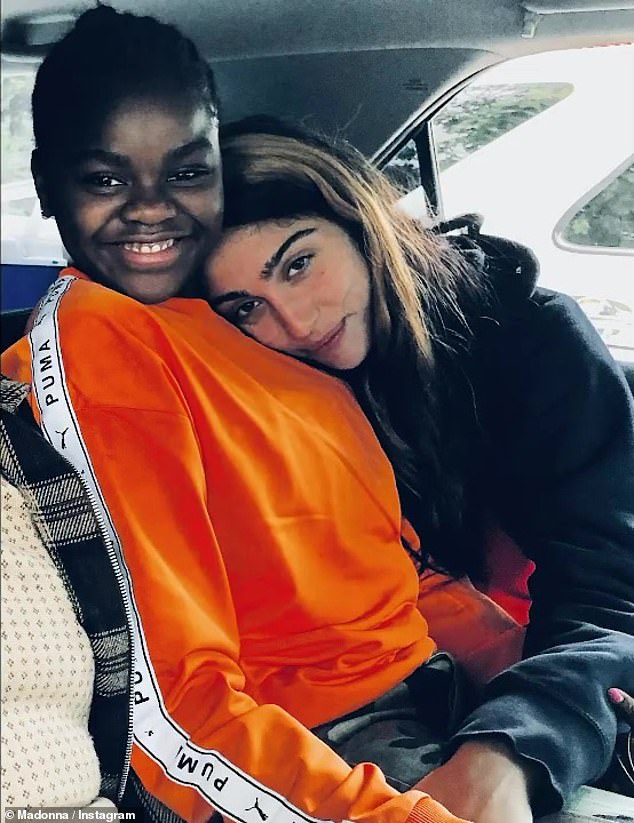 Sisters: There’s even one image of Mercy sharing a hug with sister Lourdes Leon, 25

One day earlier, Madonna marked Mercy’s birthday by posting a video on Instagram that captures some of the special moments they have shared together over the years.

‘Happy Birthday Chifundo Mercy James!! The Kindest, Most thoughtful, most Magical Girl on the Planet!!!!!!!! There is no one like you! #sweet16,’ she gushed in the caption.

The clip showcased mother and daughter together dating back to when she was a young girl.

There was also an image of Mercy sharing a hug with sister Lourdes Leon, 25.

Along with Mercy and Lourdes, who’s her biological daughter, Madonna is mother to adopted children: David, 16, Stelle, nine, Estere, nine, and her biological son Rocco, 21, whom she shares with ex-husband Guy Ritchie. 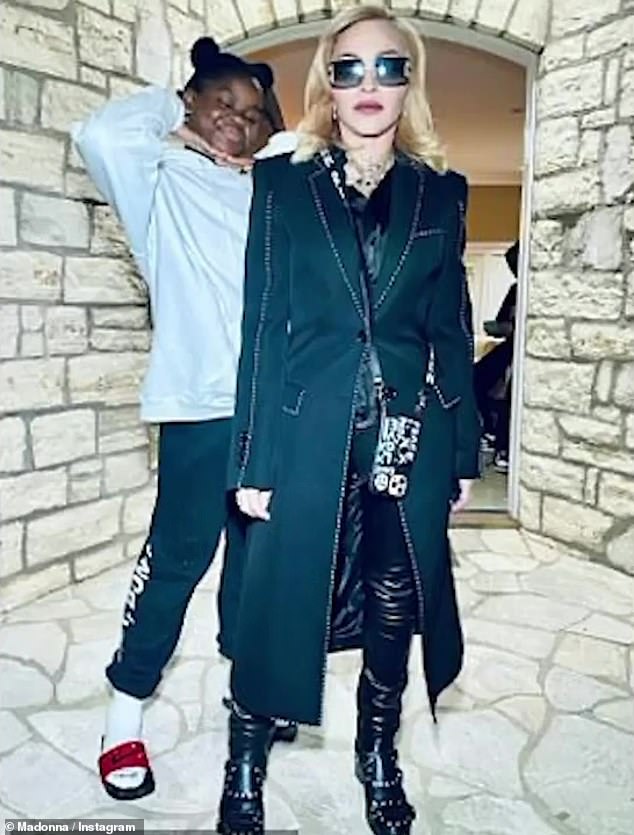 Working it: Mercy appears to strike a pose in many of the images 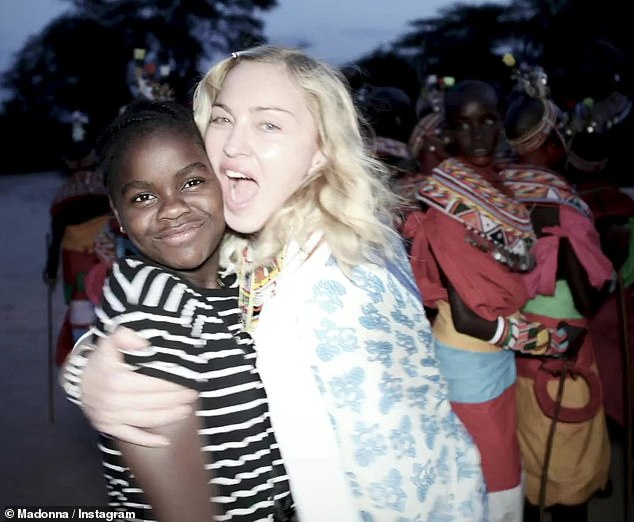 Adoption: Madonna adopted Mercy James from Malawi when she was four-years-old