Marc Anthony, 53, passionately kisses new fiancee Nadia Ferreira as she celebrates her 23rd birthday onboard luxury yacht off the coast of Miami in cheeky bikini

They announced their engagement last week.

And Marc Anthony, 53, and his new fiancee Nadia Ferreira could hardly keep their hands off each other as they celebrated her 23rd birthday with a luxurious day at sea.

The couple were spotted locking lips on board a lavish yacht off the coast of Miami on Saturday. 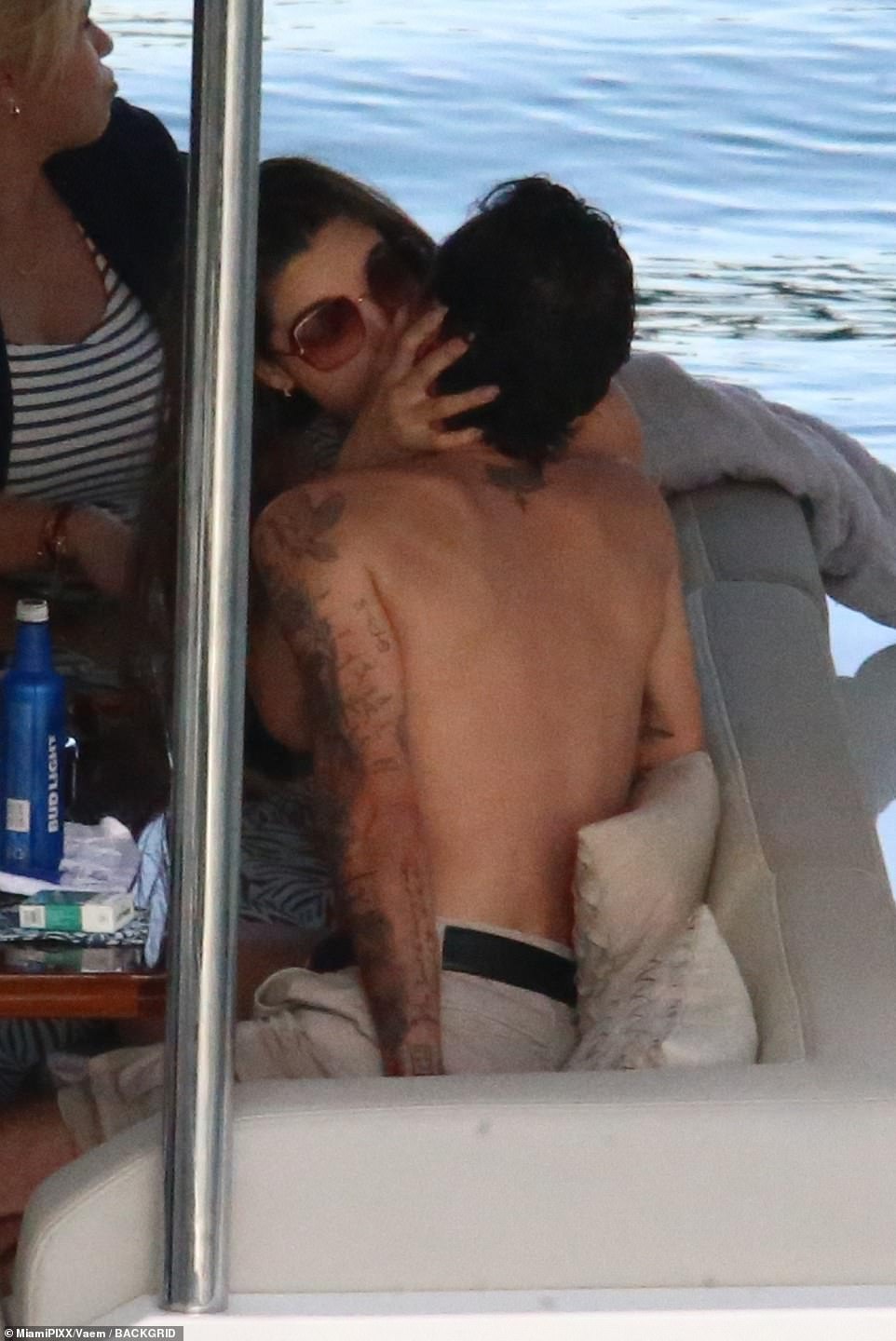 All aboard the love boat! Marc Anthony, 53, and his new fiancee Nadia Ferreira could hardly keep their hands off each other as they celebrated her 23rd birthday with a luxurious day at sea

Nadia tenderly cupped her love’s head as she pressed her lips against his, not seeming to care they were surrounded by friends and family.

The couple sat at a table where bottles of Bud Light were strewn about, and several packs of cigarettes.

They also noshed on slices of decadent chocolate cake.

Marc couldn’t have looked any happier spending some fun in the sun with his lady love, a former Miss Universe contestant from Paraguay. 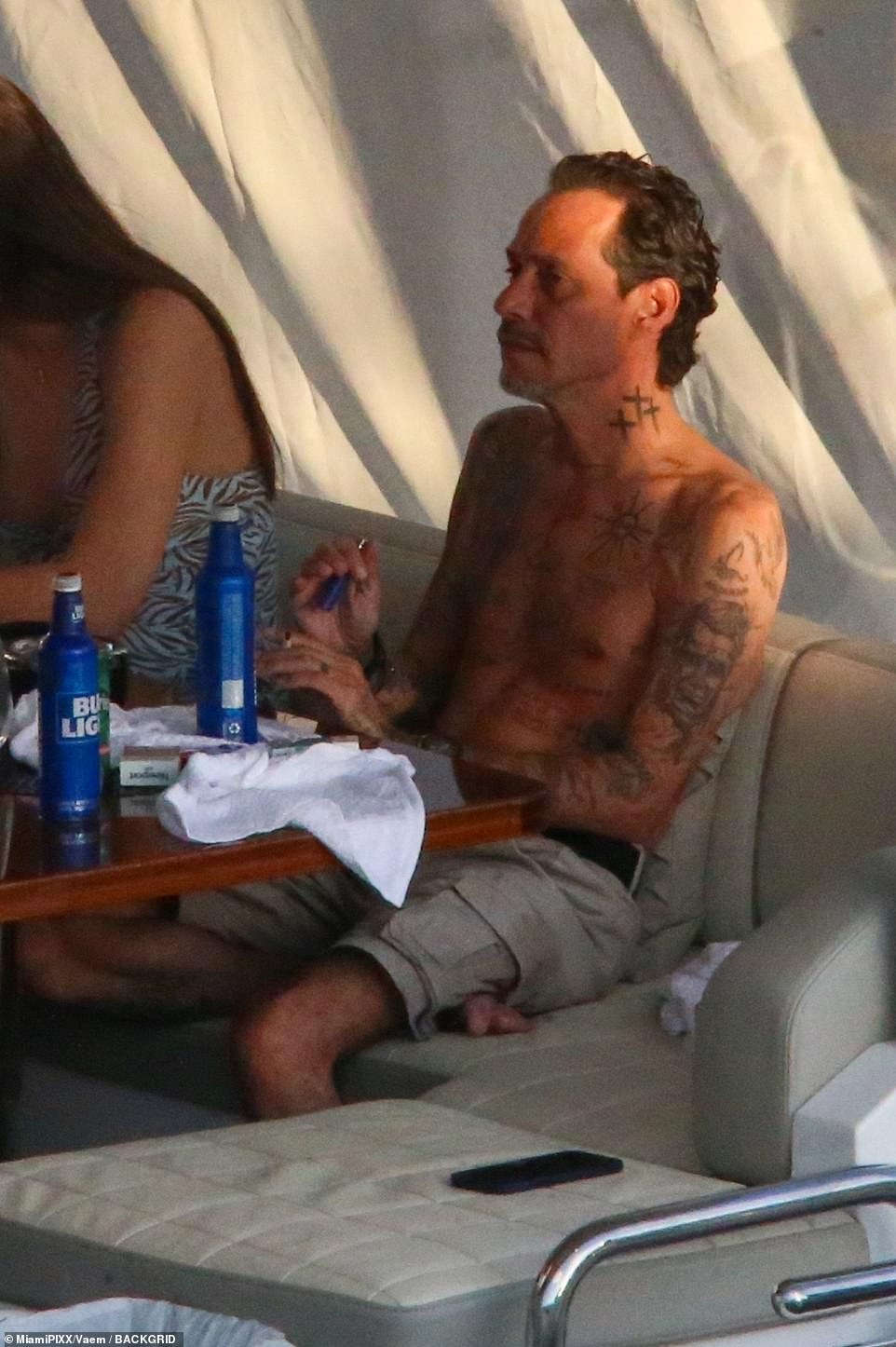 Kicking back! The hit-maker went shirtless as he lounged about with his lady love by his side 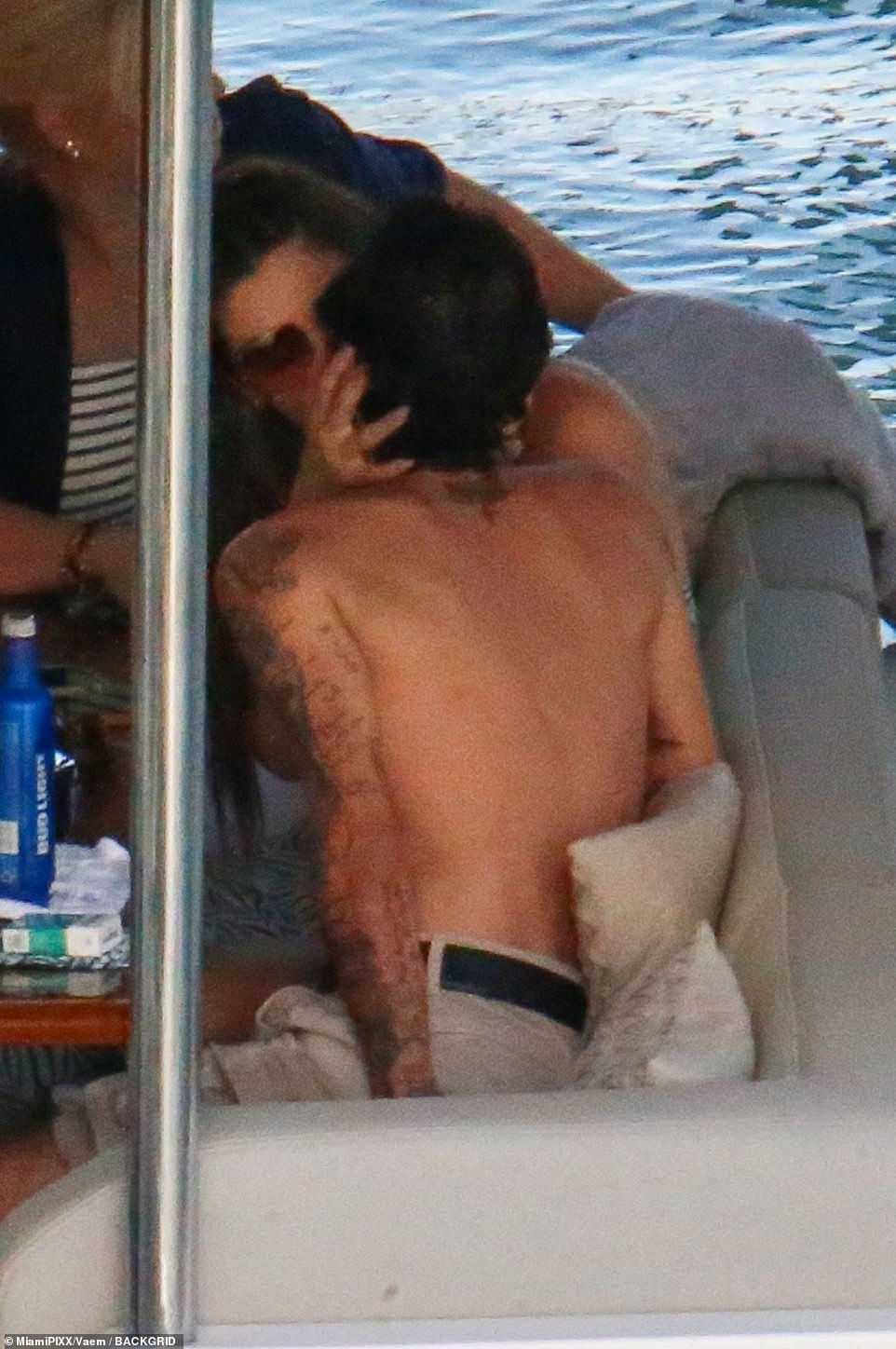 Kiss me! Nadia tenderly cupped her future husband’s head as they shared a smooch at sea

Cheeky! Nadia put her perky behind on display in a brown bikini

Nadia, who turned 23 on May 10, looked stunning in a fashionable dress with her brunette hair cascading down.

Marc, on the other hand, ditched the shirt for most of the outing.

When Marc wasn’t kissing his future bride, the Tu Amor Me Hace Bien singer puffed on a cigarette and sipped from his beer.

The couple kept the good times going as they took their gathering to the water. 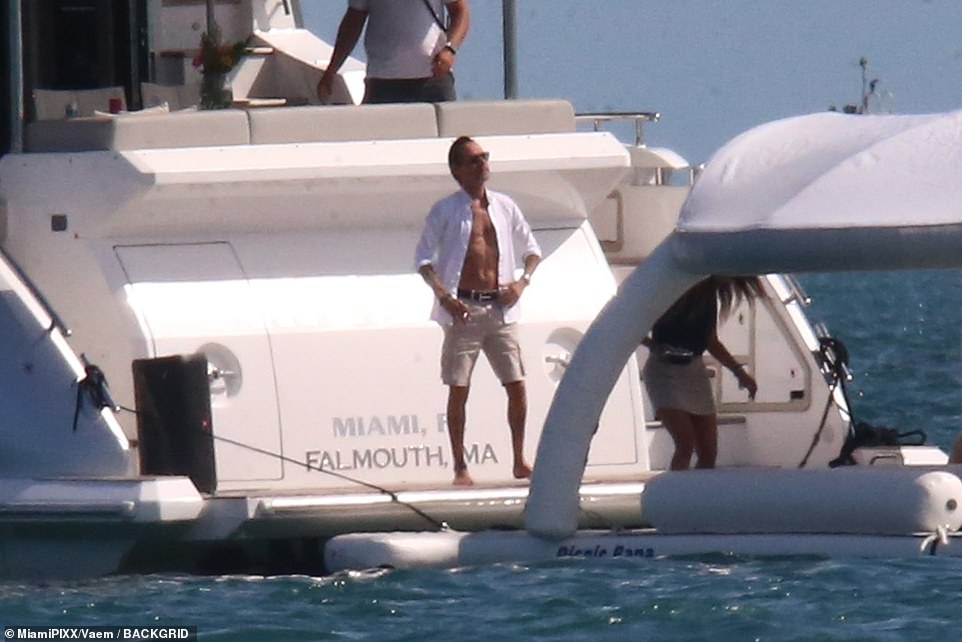 Soaking up the sun! Anthony showcased his chest as he basked in the sunshine 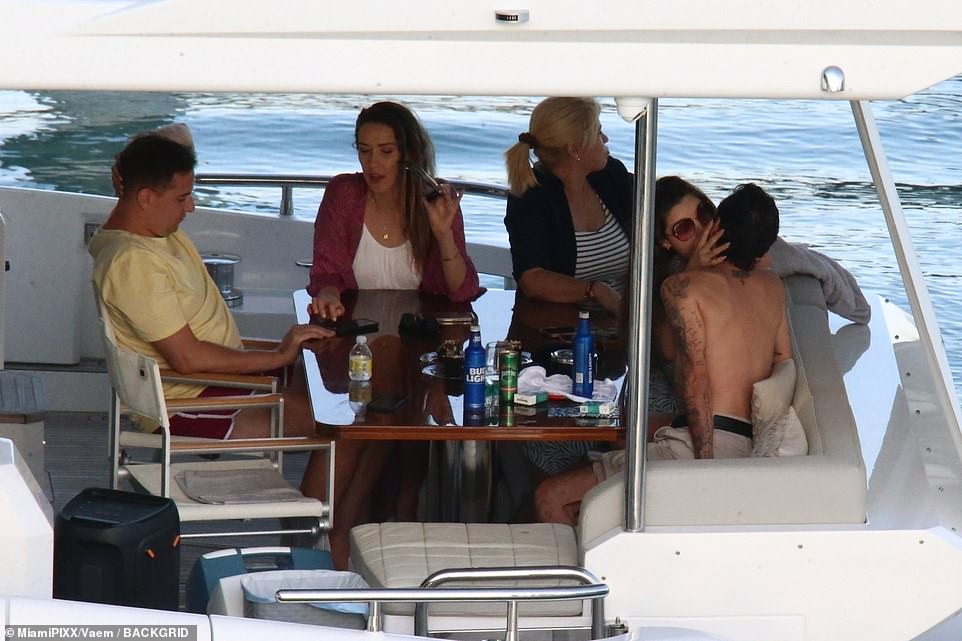 Public displays of affection! The couple tuned out the others around them in the midst of their kiss 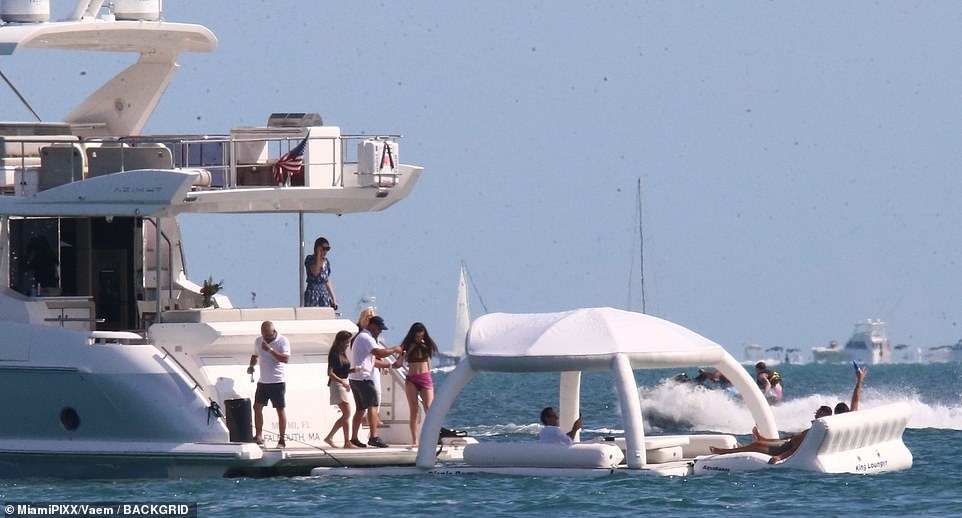 Making a splash! As Marc kicked back on the inflatable lounge space, his fiancee made her way towards the others in her brown bikini 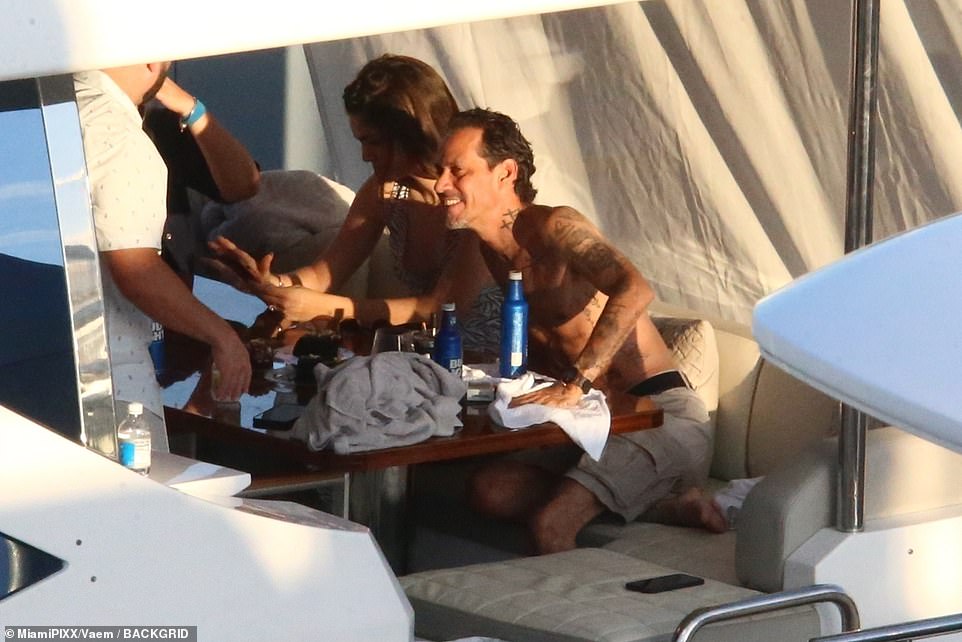 Let the good times roll! The couple sat at a table where beer and boxes of cigarettes were strewn about

Now clad in an unbuttoned white shirt, Marc basked in the sun as they prepared an inflatable lounge space on the edge of the boat.

The Vivir Mi Vida singer kicked back on the raft with his pals as Nadia joined the fun in her brown bikini.

The couple have a lot to celebrate lately following their recent engagement.

Nadia announced the engagement news via her Instagram on Thursday afternoon with a snap of her beautiful diamond ring which has a large emerald-shaped stone in the middle with two smaller stones at the sides. 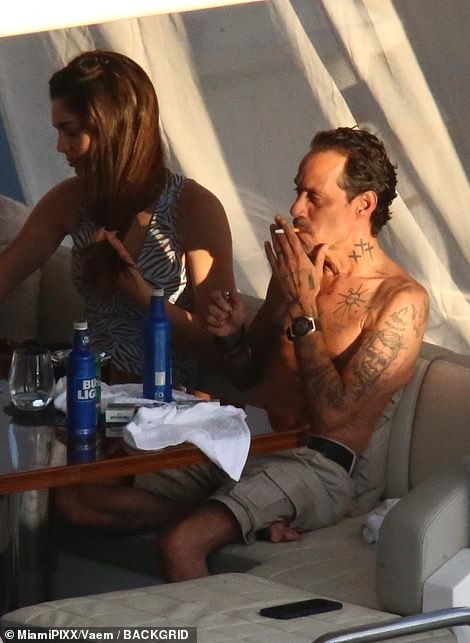 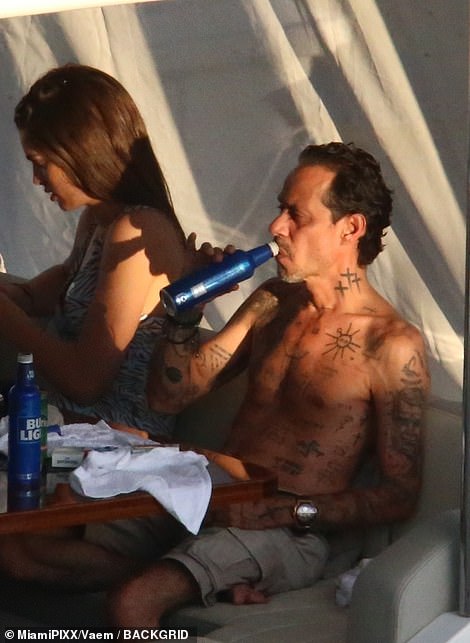 Party time: Anthony smoked on a cigarette and drank from his beer 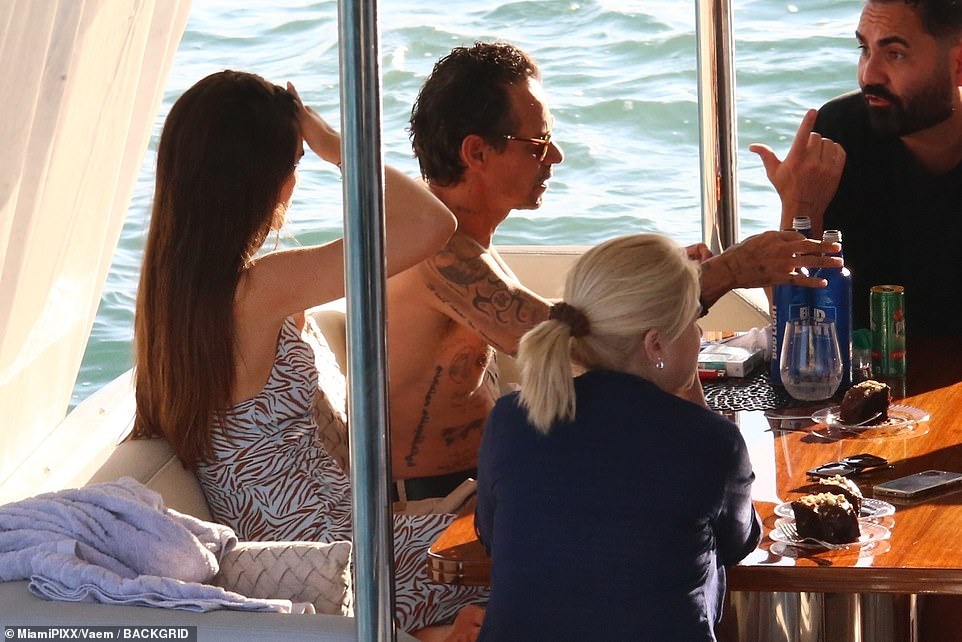 The sweet life! Marc and his pals noshed on slices of decadent chocolate cake

While it is unknown exactly how long the two love birds have been seeing one another, they officially confirmed their relationship back in March.

Anthony has had many romantic relationships. 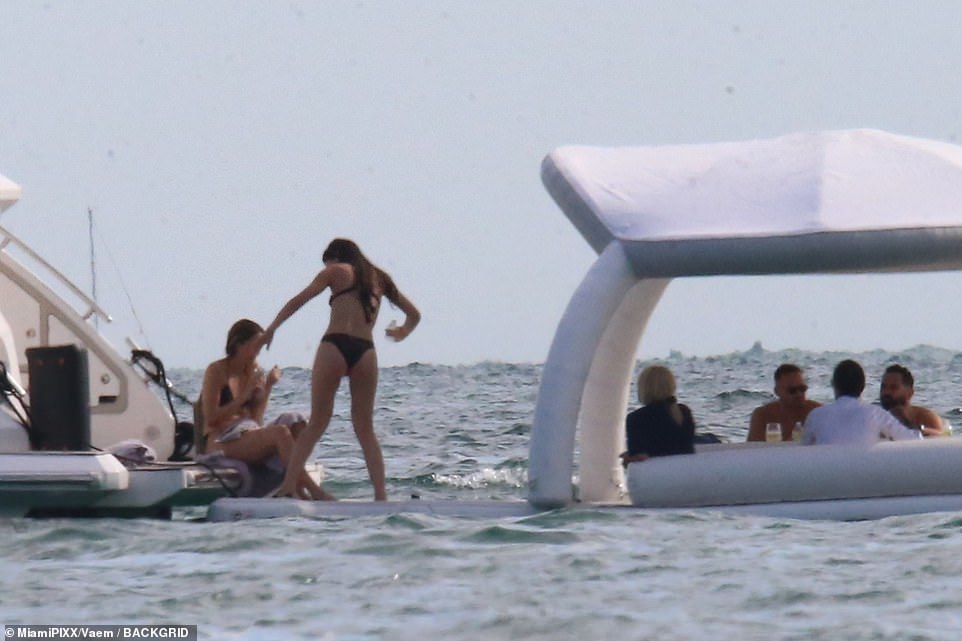 Fun in the sun! A bikini-clad Nadia treaded on the floatation device 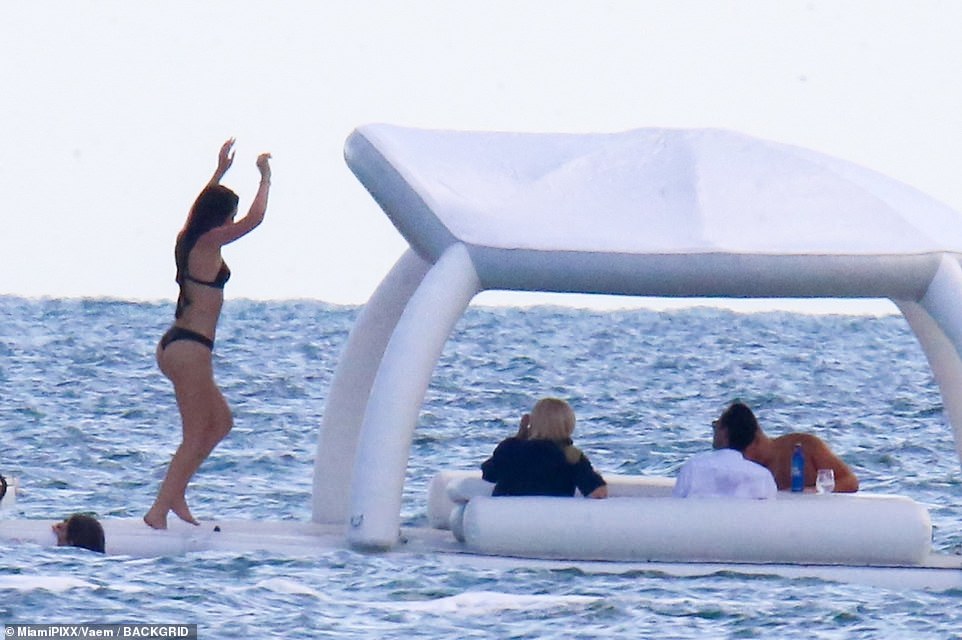 Put your hands in the air like you just don’t care! Ferreira raised her arms high into the air as she balanced atop the flotation device

His ex girlfriend from the early 1990s is Debbie Rosado with whom he has daughter Ariana Anthony, 28. It also also believed he and Debbie adopted son Chase too.

His first marriage was to Miss Universe 1993 Dayanara Delgado in 2000.

They split in 2002 then got back together and renewed their vows that same year before they separated in 2003 and finalized their divorce in 2004.

Together they share two children: 21-year-old Cristian and 18-year-old Ryan. 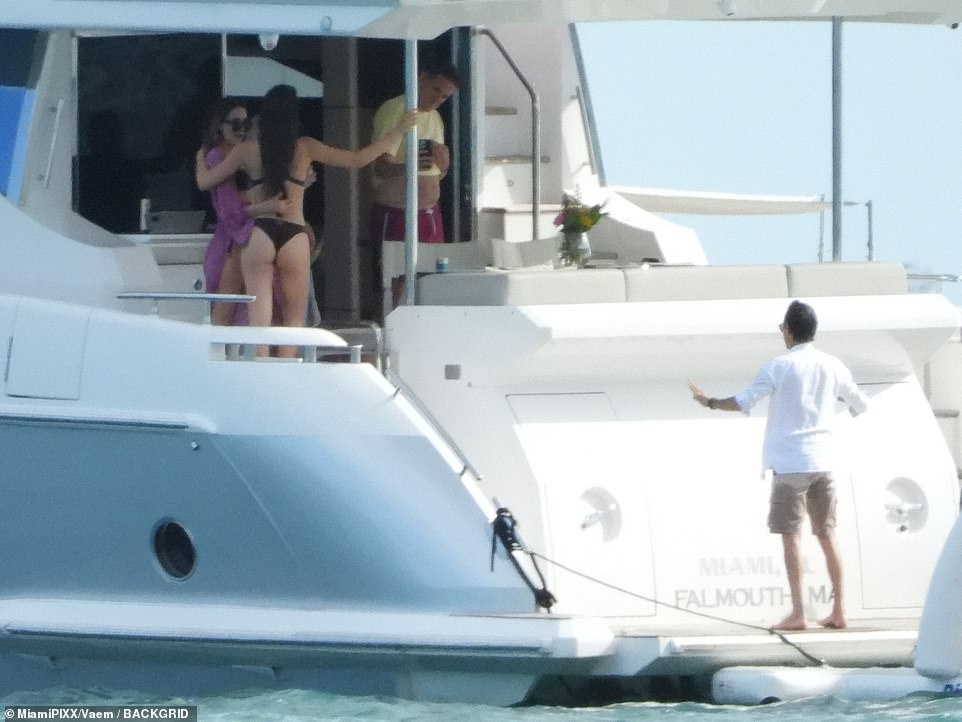 Boat loads of fun! Anthony stood at the edge of the boat as Nadia hung out with her pals 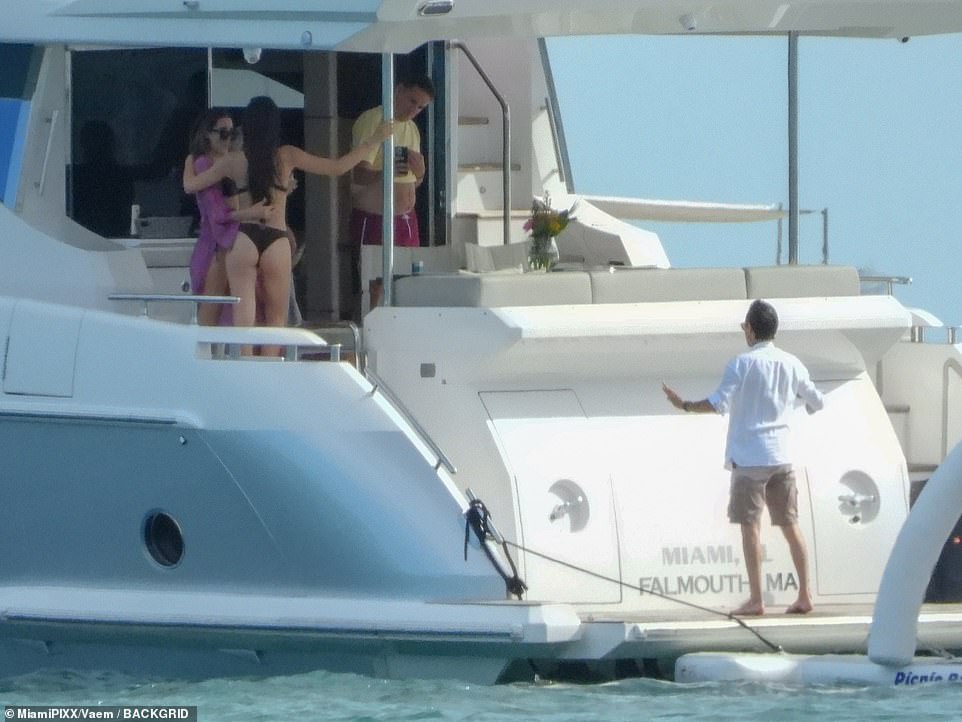 He then moved on to longtime friend Jennifer Lopez, 52, whom he wed in 2004 after she ended her engagement to Gigli co-star Ben Affleck.

The two had a very private wedding and together share twins Max and Emme Munoz who are now 14.

They made music together such as the hit duet No Me Ames, and also co-starred in the movie El Cantante in 2006 where he played salsa icon Hector Lavoe and she starred as his hot-blooded wife Puchi. 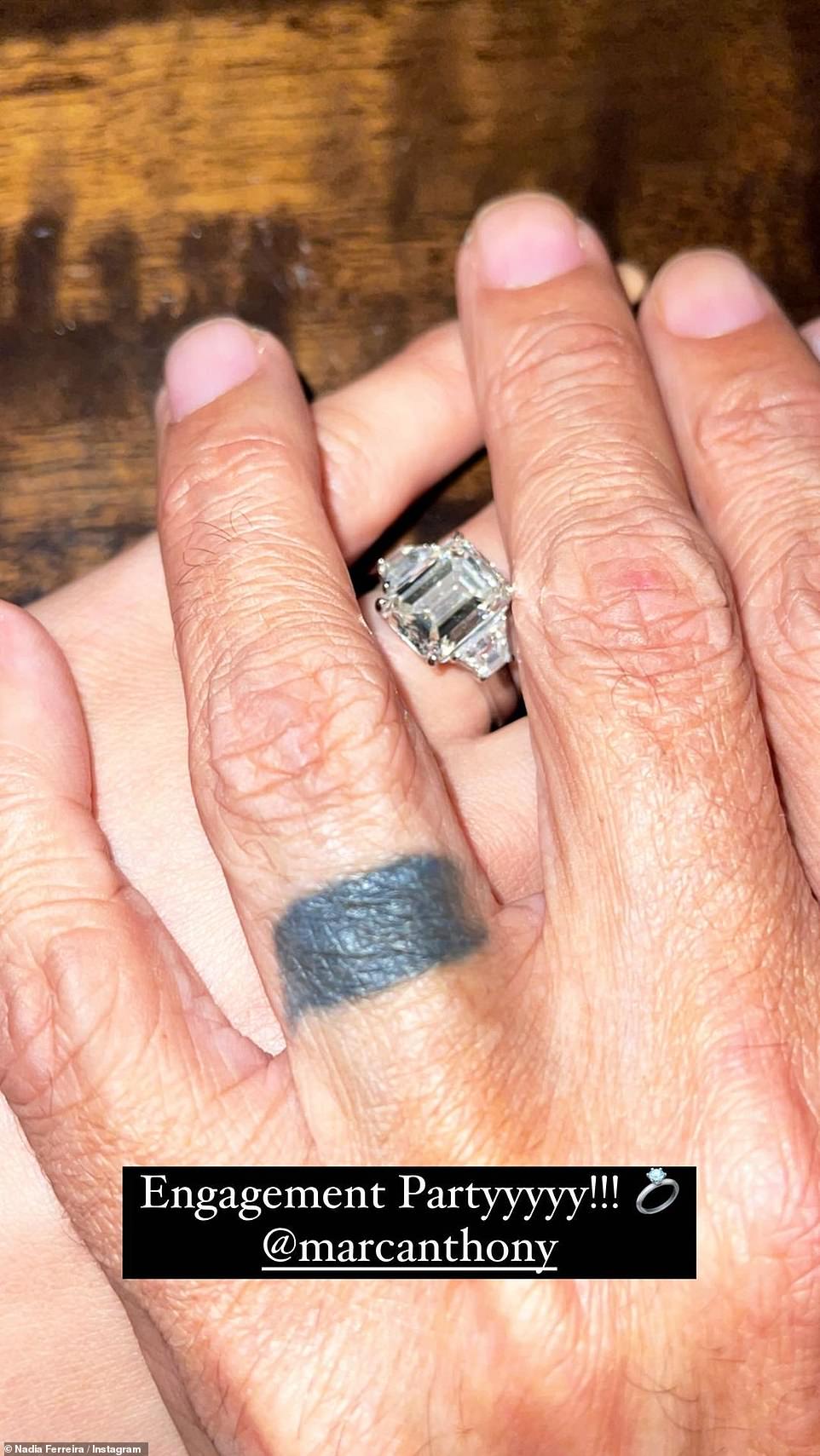 She said yes! Nadia announced the engagement news via her Instagram on Thursday afternoon with a snap of her beautiful diamond ring which has a large emerald-shaped stone in the middle with two smaller stones at the sides

His marriage to Jennifer was up and down for years as there were constant claims of fighting and infidelity that made headline news.

The two have remained friends since the divorce and even performed together on stage. They were also working together on a Spanish language album.

Next he wed Venezuelan actress Shannon De Lima in 2014; they divorced in 2017. 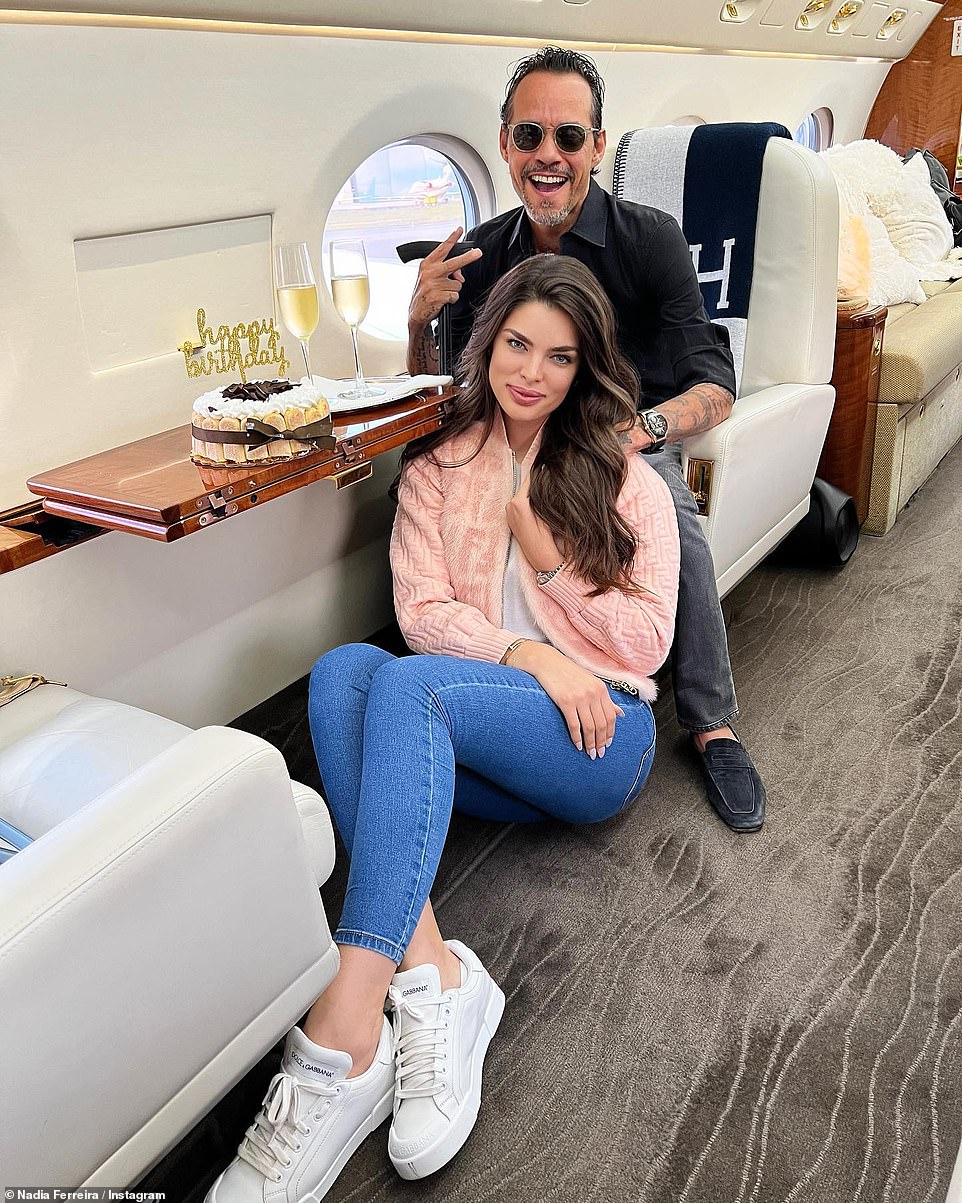 So fly! Nadia kicked off her birthday week with this luxurious snap of her and Marc on a private jet