Matthew Wright divides This Morning viewers with his quirky ponytail

‘Is that a clip-on ponytail?’: Matthew Wright divides This Morning viewers with his quirky new lockdown hair as they compare his look to Only Fools And Horses character Rodney Trotter

The mullet, the man-bun and the classic ponytail are styles all being sported by men during the UK’s third lockdown while salons remain closed to all.

And This Morning viewers couldn’t quite believe what they were seeing when The Wright Show host, Matthew Wright, 55, was sporting a mini ponytail on Friday.

Fans of the show compared his look to the clip-on ponytail famously worn by Only Fools character, Rodney Trotter, played by Nicholas Lyndhurst, 59. 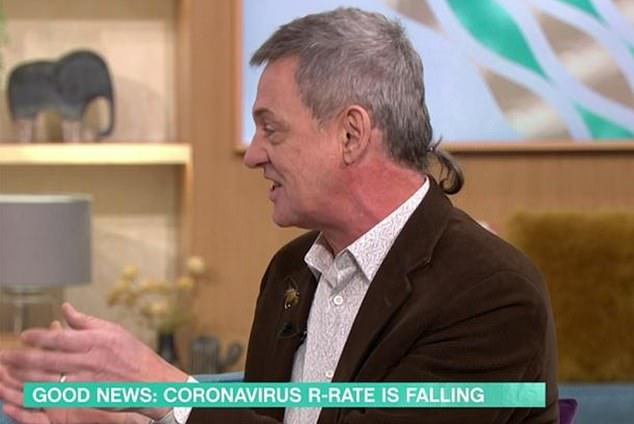 ‘Is that a clip-on ponytail?’: Matthew Wright divided This Morning viewers on Friday with his quirky new lockdown hair as they compared his look to Only Fools character Rodney Trotter

Presenter, Matthew, was on This Morning to debate whether the Covid vaccine should be mandatory, and whether tea towels should be ironed… but it was his new ‘do which stole the show.

The look definitely seemed to be done by choice, given that the rest of his hair appeared to be freshly-trimmed.

Rodney Trotter famously wore a clip-on ponytail to meet his girlfriend Cassandra at her flat, in scenes which were aired in 1991. 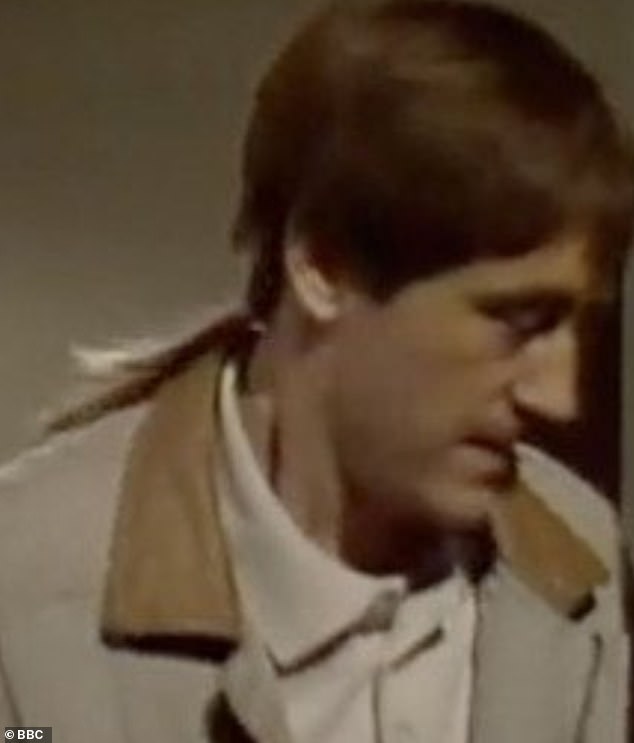 Iconic: Rodney Trotter, played by Nicholas Lyndhurst, famously wore a clip-on ponytail to meet his girlfriend Cassandra at her flat, in scenes which were aired in 1991

But when she tells him she doesn’t think ponytails are cool, he unclips it, but she later screams, mistaking it for a rat.

During the show, Matthew said he only ever irons the fronts of his shirts when making a TV appearance as that is the only visible part.

Host Eamonn Holmes, 61, said: ‘Well we know that because people see the back of your head and they know exactly what’s going on,’ to much laughter.

Meanwhile, viewers were divided over his Matthew’s new look. Taking to Twitter, they wrote: ‘Does @Matthew_Wright have a ponytail? Or has lockdown finally got to me?’

‘Watching This Morning but why is Matthew Wright doing a Rodney ponytail?’ 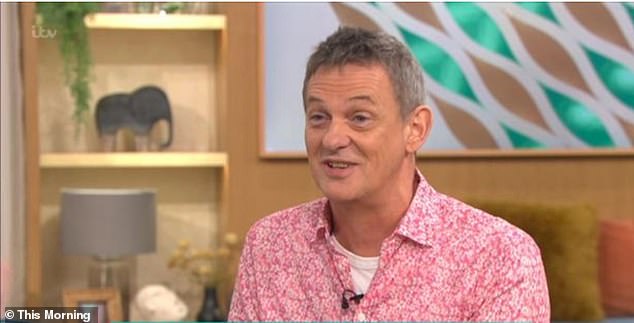 His usual look: Matthew also sports short neat hair but it’s clear he fancied a change – and why not? – Pictured on This Morning in January

‘No-one is going to listen to Matthew Wright advocating mandatory vaccines when he has that ponytail.’

‘Could you please confirm that you have Rodney Trotter clip on ponytail #delboymoment #mademesmile.’

‘Is Matthew Wright on a dare with that ponytail? His wife should cut it off when he’s asleep!’ 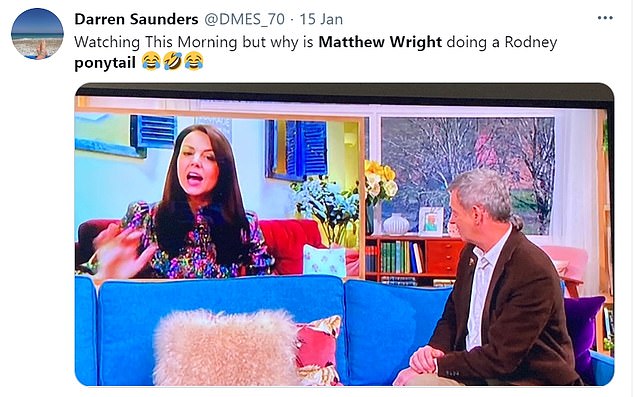 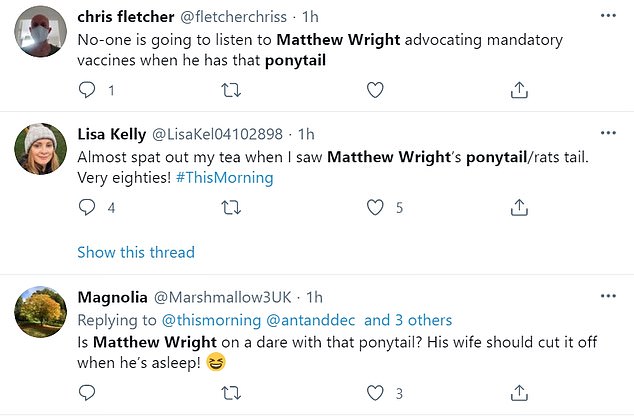 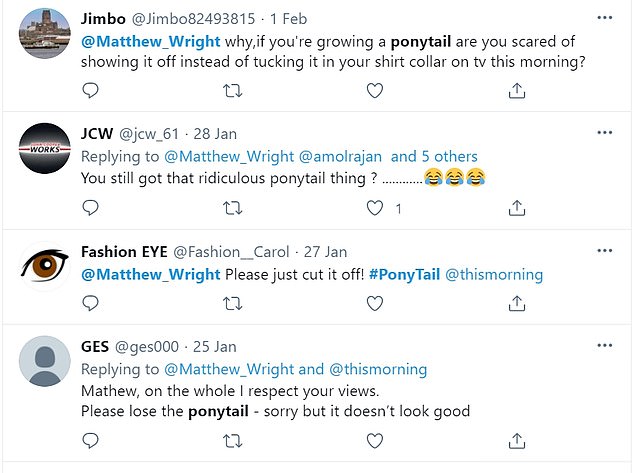 Not sure: Viewers were divided over the new look, with some saying ‘it doesn’t look good’ and others saying he should do as he pleases

Others defended his new style, writing: ‘Enough with the Matthew Wright’s ponytail tweets – it’s his hair, and if he likes it, then that’s great. Nothing to do with us at all!’

‘@Matthew_Wright Why,if you’re growing a ponytail are you scared of showing it off instead of tucking it in your shirt collar on tv this morning?’

‘Ok I can tolerate a small ponytail but I won’t tolerate a man bun you dare Mathew.’ [sic]

‘Just saw your stint on @thismorning, loving the little ponytail, very you! And you thought no one had noticed!’ 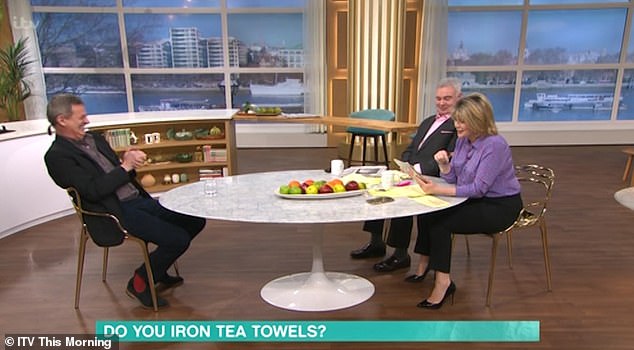 All eyes on that barnet: Other topics, such as ‘do you iron tea towels?’ were also discussed but that was not the question on viewers’ minds 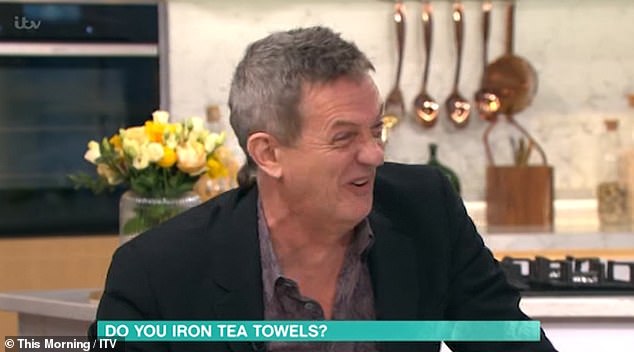 He’s into it: Matthew appeared in very high spirits during the appearance as he tried out his new look