Megyn Kelly has slammed the Kardashians for their ‘unrivaled vanity’ and denounced the reality TV family as a ‘force for evil.’

‘Like, the self promotional out of control focus on oneself, ego, clicks, likes – they’re hugely responsible for that in our society,’ the 51-year-old said on her podcast. ‘They didn’t do it by themselves, but more than any other, they’ve had a terrible effect in that lane, and I do blame them. I do!’

This comes after the TV personality slammed Jennifer Lopez and Shakira for showing off their bodies during their Super Bowl halftime performance. 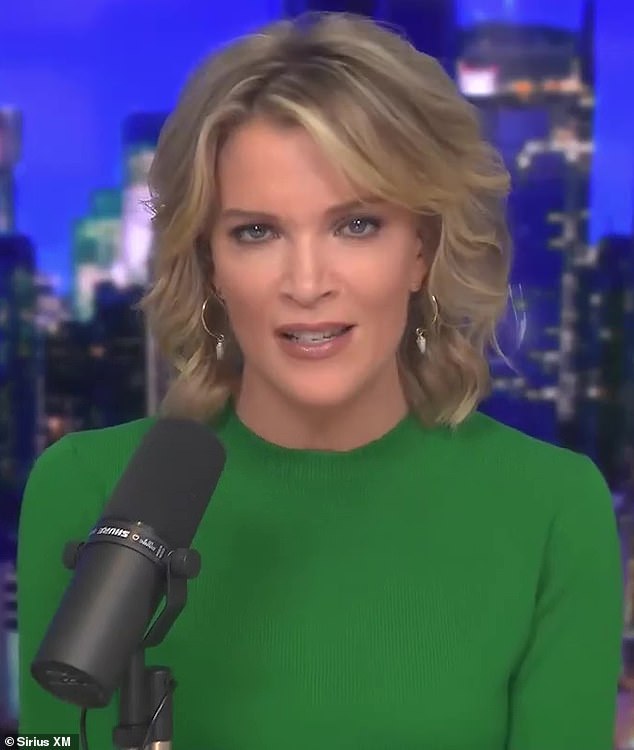 Scathing: Megyn Kelly has slammed the Kardashians for their ‘unrivaled vanity’ and described the reality TV family as a ‘force for evil’

Kelly recalled interviewing the family on the Today show and asking them: ‘Are you a force for good or a force for evil?’

She remembered: ‘And they gave me their answer, but the more I’ve watched them over the years, the more I think that net, it’s evil.’

The mother of three went on: ‘I don’t think this is healthy and that’s what I object to is like their disgusting vanity, which has spread like wildfire in our society.

‘The selfie culture is abhorrent to me. I think that’s what I’m responding to as opposed to some titillation from a beautiful woman here and there.’

Five years ago Kelly welcomed Kim, Kourtney and Khloe Kardashian, as well as Kendall and Kris Jenner, onto the Today show to discuss the 10-year anniversary of Keeping Up With The Kardashians. 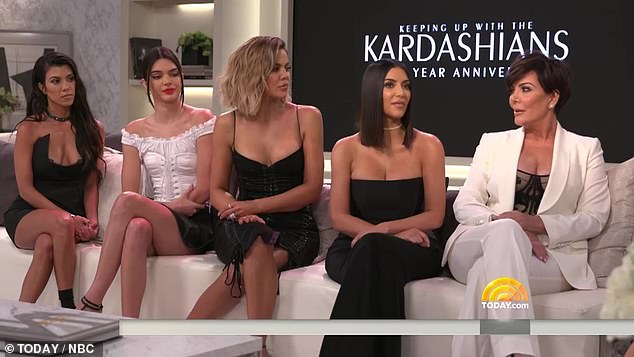 Putting it to them: Kelly recalled interviewing the family on the Today show and asking them: ‘Are you a force for good or a force for evil?’

She confronted her guests: ‘Women will say: “The Kardashians are evil because my kid is looking at pictures of them and is being driven towards superficial goals that are unattainable.” I said publicly before, I wanna ask you that question – are you a force for good or a force for evil?’

Kim laughed off the backlash and defended her show, saying: ‘I think we’ve honestly, through our show, we’ve shown so much more positive things.’

She cited the ‘feedback we get even from, you know, Kendall and Kylie’s dad transitioning and people not knowing how to handle that and how to deal with that.’ 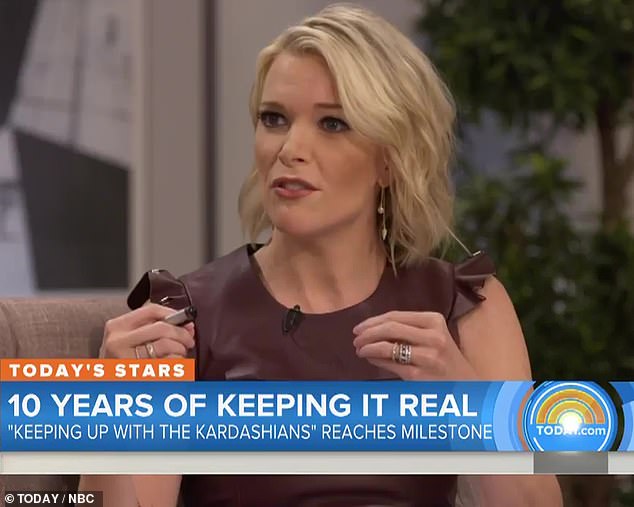 Critique: Megyn told them: ‘The people that don’t love it say: “My daughter doesn’t look like a Kardashian, and she feels pressured to be perfect and to look like they look”‘

Kris, the ‘momager’ behind the family’s success, maintained that the critics of the show are ‘a very small percentage. I mean, the girls have hundreds of millions of followers – hundreds of millions – and like Kylie for example, she employs five or six hundred people on her team.’

Kendall added that Kylie, as the figurehead of a global lip kit enterprise, ‘has an insane business and anyone who says they don’t want their kid to be like that and have an insane business at 19 and literally be like so successful is insane to me.’

Kelly was evidently unconvinced, doubling down on her criticism and noting: ‘The people that don’t love it say: “My daughter doesn’t look like a Kardashian, and she feels pressured to be perfect and to look like they look.”‘

Kendall, a stunningly svelte supermodel, cooed: ‘None of us are perfect,’ while Khloe, who used to have a much fuller figure than the one she has now, remembered how she used to be unfavorably ‘compared’ to her sisters. 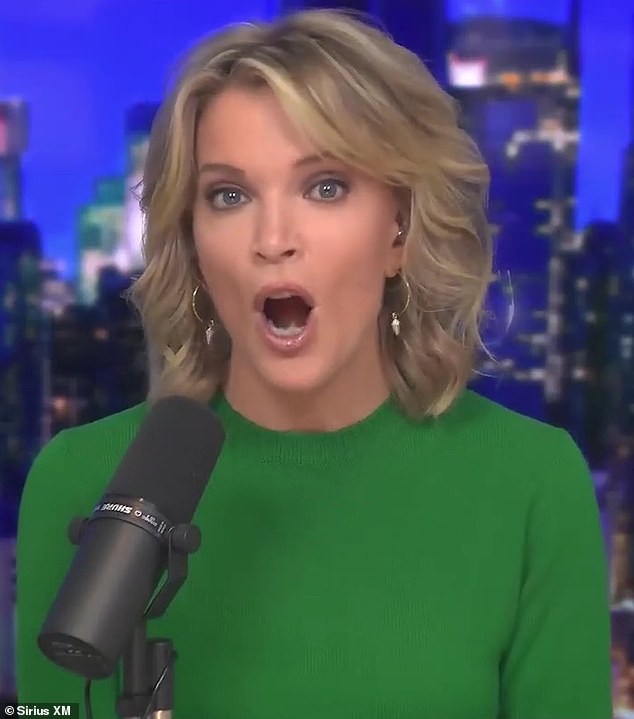 Not having it: Kelly said on her podcast recently that the Kardashians ‘gave me their answer, but the more I’ve watched them over the years, the more I think that net, it’s evil’

‘But I had such an amazing core base that I never felt less-than,’ Khloe claimed, ‘and if anyone is comparing themselves to somebody else, that’s your responsibility at home to teach them what core values are and to be a good person from within.’

Kelly’s new remarks about the Kardashians came in the same podcast episode where she slated the revealing outfits Jennifer Lopez and Shakira wore to their Super Bowl halftime performance in 2020.

‘I object to like J.Lo and Shakira showing their vag at the Super Bowl,’ Kelly said during a recent episode of her podcast, The Megyn Kelly Show. ‘Like I don’t want that. It’s gotta be situation appropriate.’

Kelly was chatting with guest Bridget Phetasy about women ’embracing their bodies’ when the performance came up. 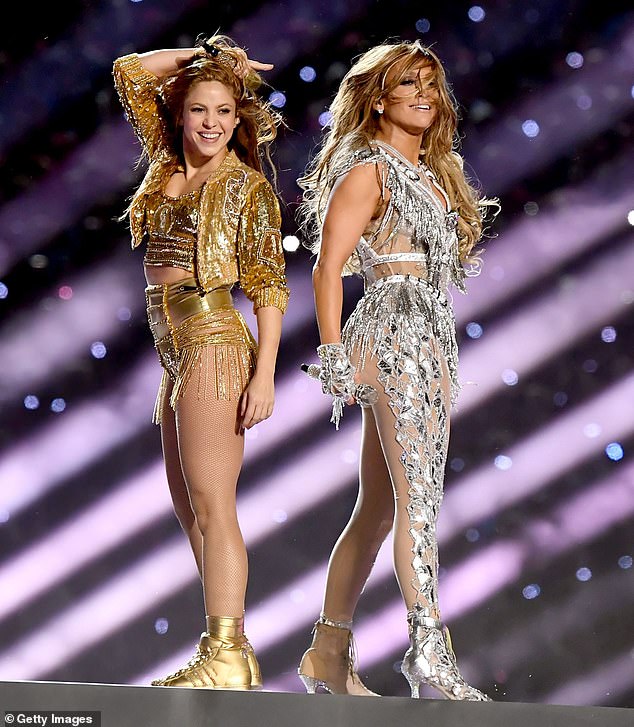 ‘I object to like J.Lo and Shakira showing their vag’: Kelly also slated the outfits Jennifer Lopez and Shakira wore during their Super Bowl halftime performance in 2020

While she had a bone to pick with J-Lo and Shakira, she did cite Paulina Porizkova as an ideal example of someone flashing the flesh.

‘But I don’t really object to just like women embracing their bodies or showing up their bodies like the pictures you see,’ she continued.

‘Paulina Porizkova just had a really interesting post,’ she continued. ‘She showed her bottom, she looks amazing.’

Last month, Paulina posted several snaps of her flashing her behind, including one in early September in which she basked in the sunshine in a cheeky bikini. 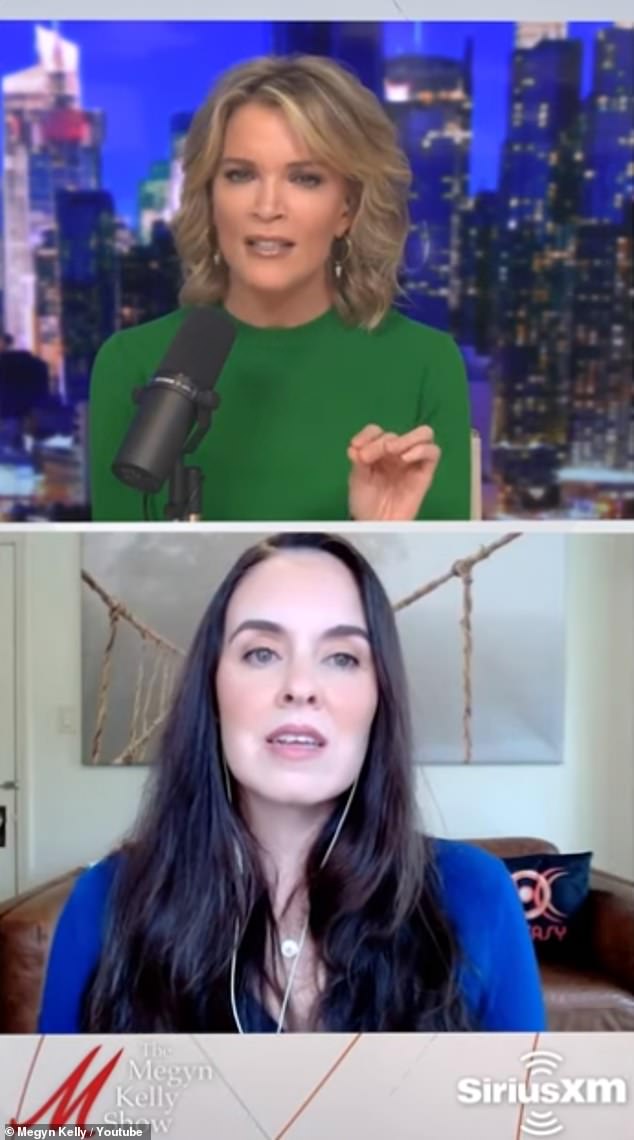 ‘I don’t want that’: Kelly had a bone to pick with JLo and Shakira during an episode of her podcast

Kelly is not the only person to have taken issue with JLo and Shakira’s halftime show.

In the hours following the February 2 broadcast, the act received 1,300 complaints filed with the Federal Communications Commission.

The lively performance – which received more viewership than the game – saw the pop stars belly dancing and pole-spinning in skimpy outfits.

Viewers claimed they had to ‘shield their children’s eyes’ and branded the up-close shots of the stars as ’embarrassing’, according to to freedom of information responses collected by WFAA. 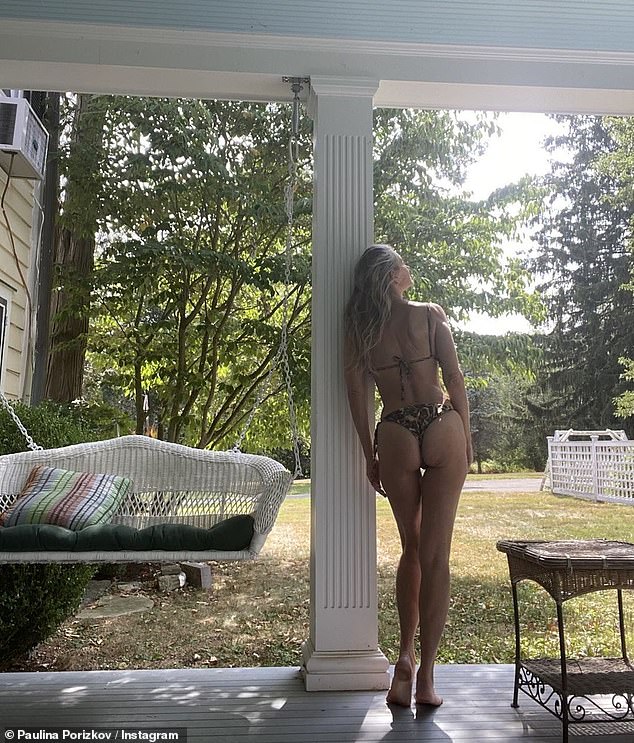 One of the more strongly-worded complains moaned that their eyes had been ‘molested’.

‘God forbid we expected to watch football and a quick concert but instead had our eyes molested.’

Super Bowl LIV drew 102 million total viewers on Fox and all its platforms.

The half-time show complaints received by the FCC represent one one-thousandth of a per cent of all viewers, according to the commission.

By comparison, the Super Bowl half-time show in 2004 that featured Janet Jackson’s wardrobe malfunction saw 540,000 complaints in the weeks after the live broadcast.