They’ve gone from strength to strength since tying the knot six years ago.

And Michelle Keegan looked incredible as she flaunted her abs in a stunning bikini snap posted by her husband Mark Wright to celebrate their anniversary on Monday.

The actress, 33, was also seen lounging in frilly lingerie and tattooing an ‘M’ on the hunky former TOWIE star, 35, in another image taken as they relaxed in bed. 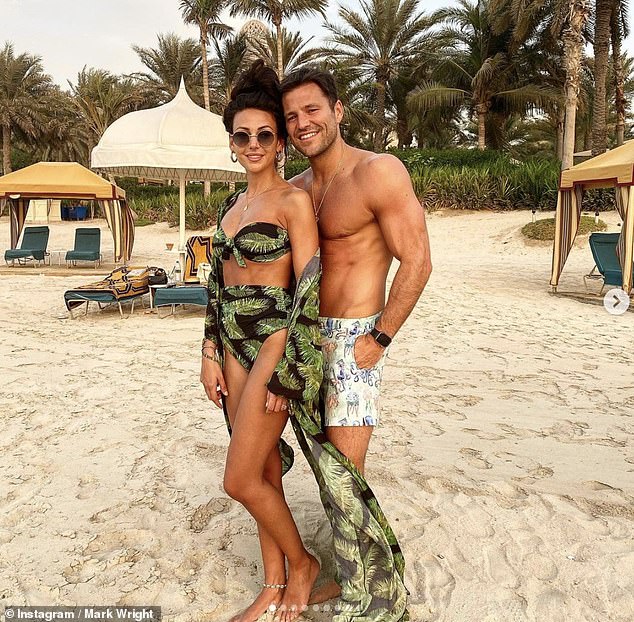 Incredible:  Michelle Keegan looked incredible as she flaunted her abs in a stunning bikini snap posted by her husband Mark Wright to celebrate their anniversary on Monday

Michelle sizzled in the first snap shared by Mark, which highlighted her toned figure and impeccable sense of style.

The brunette beauty beamed a smile as she rocked a black and green palm print two-piece and matching sheer beach coverup.

Her doting husband also looked delighted while posing up a storm on the beach, showcasing his chiselled physique in a pair of patterned shorts.

While another anniversary image saw the loved-up pair enjoying a candid moment in bed, with Mark laying on his front while Michelle doodled on his arm. 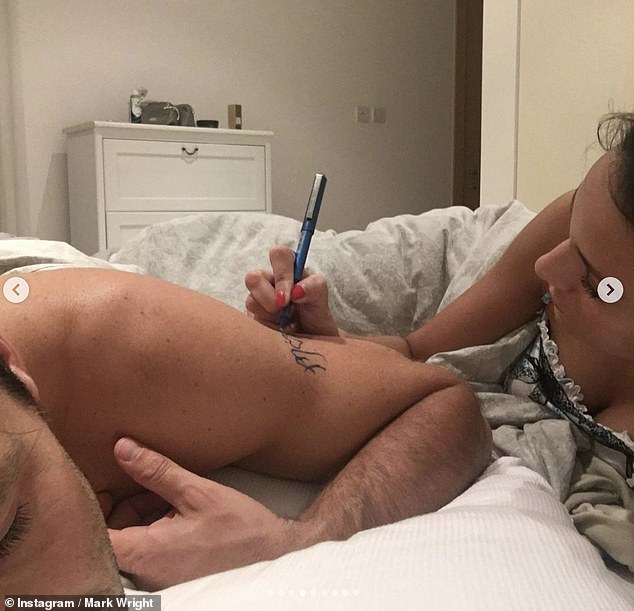 Intimate moments: The actress, 33, was also seen lounging in frilly lingerie and tattooing an ‘M’ on the hunky former TOWIE star, 35, in another image taken as they relaxed in bed

‘Happy anniversary Treac’: Mark gushed over his wife as he celebrated six years of marriage

Michelle seemed to be penning their matching initial ‘M’ onto his gym-honed arm alongside a love heart.

The Brassic star cut a stunning figure for the candid bed snap, wowing in a silky top which boasted a white frill along the top.

Ensuring to show his complete devotion to his beautiful wife, Mark also treated fans to a slew of further looks into his marriage.

He included a selection of holiday throwback snaps, including one of the pair enjoying a skiing trip, and a beaming selfie taken at an ice hockey game. 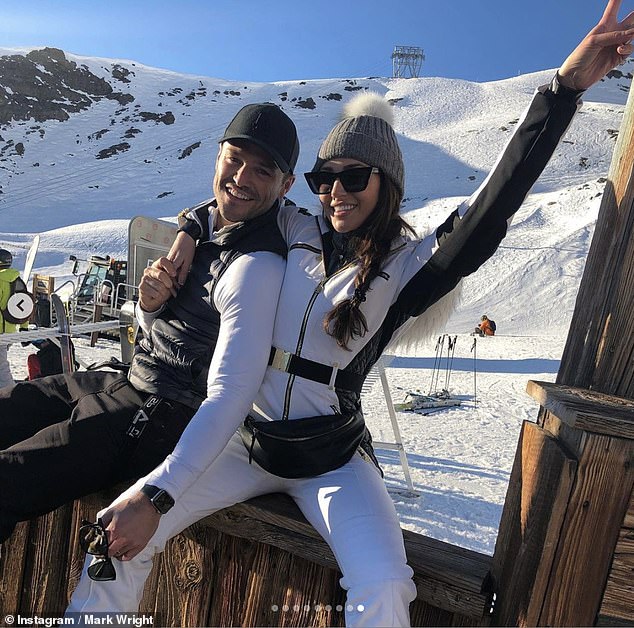 Great memories: The loved-up couple were also seen enjoying a ski trip in another sweet throwback which made the anniversary post 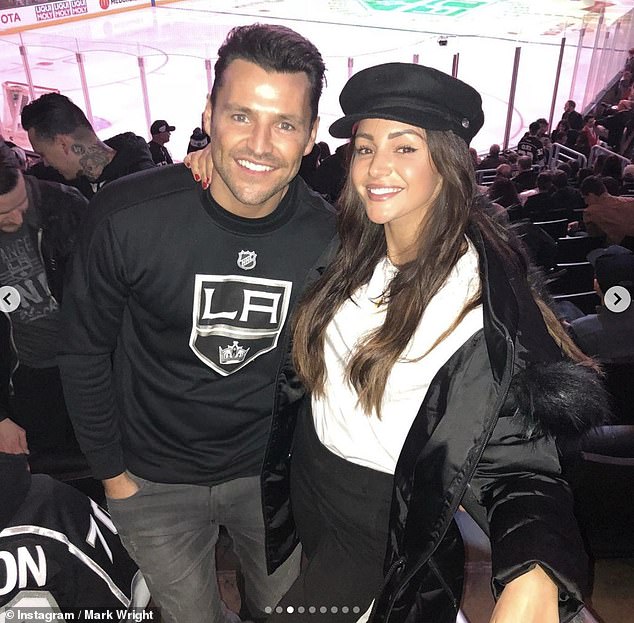 Captioning the images, Mark gushed: ‘Another year goes by, just like that. 6 YEARS!! and it still feels brand new every day. Happy anniversary Treac. Love you x’

Mark and Michelle, who met in Dubai in 2012, tied the knot in a glittering ceremony at St Mary’s Church in Bury St Edmonds before holding their reception at Tudor mansion Hengrave Hall in Suffolk in 2015.

The gushing anniversary post comes as Mark appeared on Monday’s edition of This Morning to talk about his latest health venture.

During his appearance, Mark explained how being ‘plump in the face’ 10 years ago motivated his fitness journey and change from being a party boy. 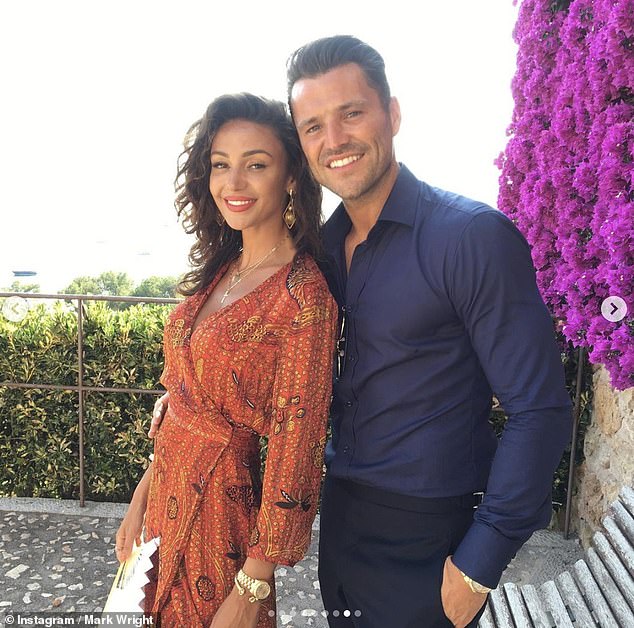 Stunning: Michelle looked radiant as she put on a cosy display with her beau in another sun-soaked throwback picture

He said:’If you look at pictures of me from 10, 11 years ago I was more plump in the face, not overweight, but that was when I decided I need to get into fitness. It went from being a party boy to that.’

Speaking about his fitness and using social media to encourage himself to stay active Mark added: ‘Normally I train everyday but I wasn’t for 2, 3 weeks so I did a live on Instagram to make me do it and everyone joined in and it grew from there.

‘Coming out of lockdown, people were like “what are you gonna do?” So that’s when it turned into more of a business. They can read the book or buy my app.’ 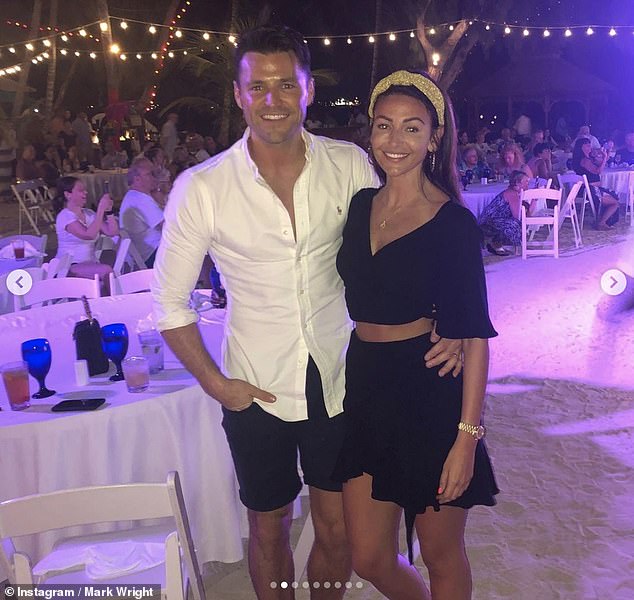 Where do the years go? Mark gushed ‘another. year goes by, just like that’ as he fondly reflected on married life Big day: Mark and Michelle tied the knot in a glittering ceremony at St Mary’s Church in Bury St Edmonds before holding their reception at Tudor mansion Hengrave Hall in Suffolk in 2015 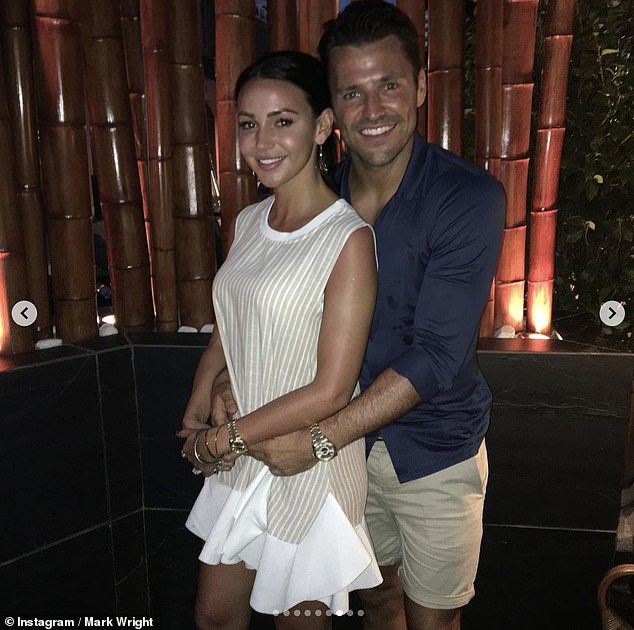 Loved-up: Mark wrapped his arms around his beautiful wife in another snapshot of their life together shared with fans

He continued: ‘When I got into training it was 2 or 3 years before I found what I loved. Until you find what works for you and what you enjoy really.

‘Instead of me trying to tell you what works for you, follow what I do and trust it. It makes me feel great physically and mentally.

‘I used to do it [training] because I had to, I played football and it was all I knew. But when I quit football I started going the other way.

‘I never trained myself, I was always taught by a coach. I don’t suffer from any kind of mental issues but we all have those moments and if I train it makes me feel amazing.’

Last week, Mark revealed that his sex life is better than ever and cited his fitness regime as the root of all pleasure. 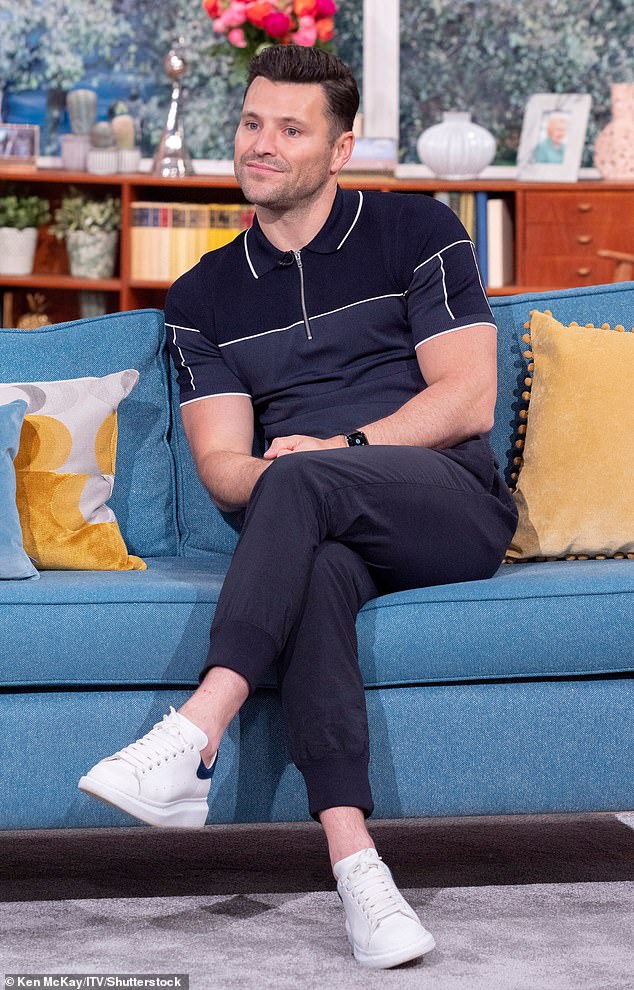 New venture: The gushing anniversary post comes as Mark appeared on Monday’s edition of This Morning to talk about his fitness and upcoming book Get Fit, Get Healthy, Get Happy 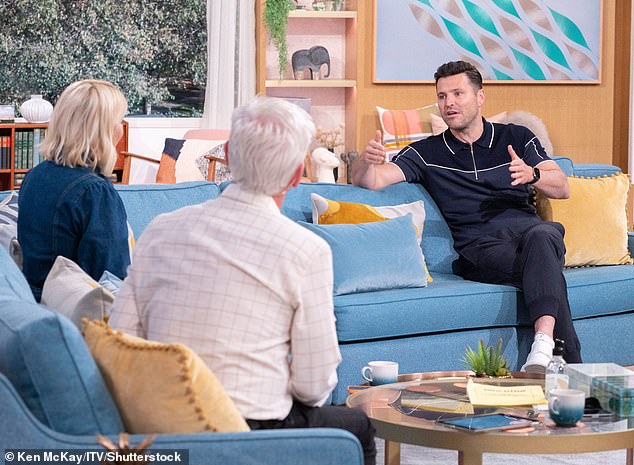 Candid: Mark told hosts Holly and Phil that being ‘plump in the face’ 10 years ago motivated his fitness journey and change from being a party boy

He continued: ‘I think having a healthy sex life is proven to help the mind and relieve stress. It all goes hand in hand.

It comes ahead of the release of Mark’s new book that hopes to help those with a low libido boost their chances of sexual appetite.

The reality star acknowledged that while a conversation about sex is ’embarrassing’ to have, he also alleged that his book would change the reader’s life for the better.

Mark comes from a long line of fitness fanatics after his dad Mark senior and two brothers were professional footballers and his uncle was a pro golfer. 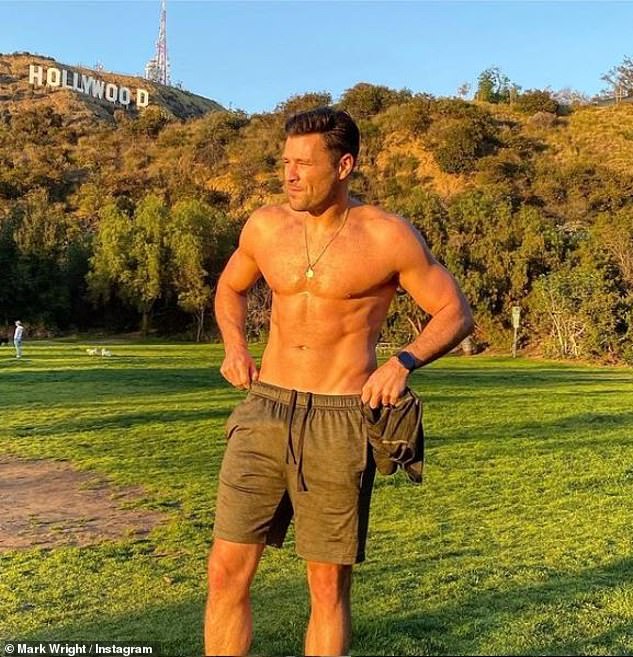 Sweating to satisfaction: Mark revealed on Friday that his sex life is better than ever and cited his fitness regime as the root of all pleasure

And aside from his book release, Mark and Michelle have been keeping busy with building their £1.3million dream home in Essex.

Mark and Michelle have submitted plans for a vast plan for a granny flat alongside the grounds of their abode.

The loved-up couple re-submitted drawings for the outhouse to Epping Forest District Council, and reveal that the annexe will have an ensuite bedroom, a cloakroom, kitchen, dining area and sitting area.

The couple purchased the original property for £1.3million in October 2019 and in January 2020, it was revealed that they were demolishing the four-bedroom farmhouse onsite for a lavish new five-bedroom mansion with a ‘classical design’, complete with bar, gym, kids’ playroom, and outdoor swimming pool.

The outhouse will stand at 56 sqm, which is bigger than the average London flat according to numbers from the Office Of National Statistics, which state City of London flats have a median value of 47sqm.

Epic: Mark and Michelle are adding a designer granny flat to the grounds of the new mansion they are building in Essex and new plans have shown the staggering size of the outhouse 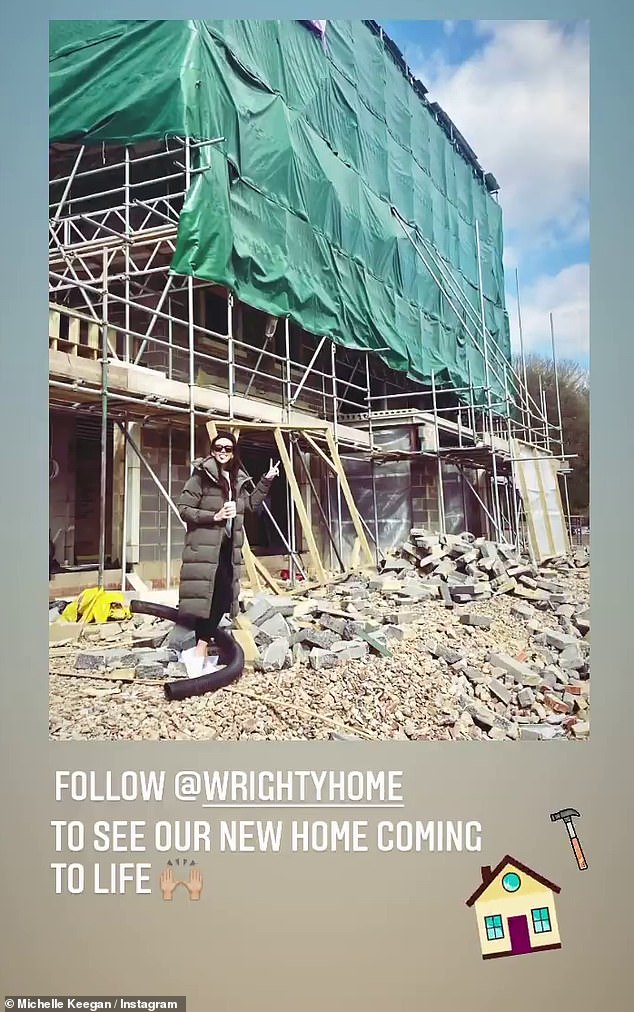 Grand designs: The couple have been keeping fans updated on the progress of their building project on their Instagram page

The couple are hoping that normal life can be resumed once the pandemic is over and can use the guesthouse for visiting family and friends. The new addition is where the stables of the old farmhouse used to be.

It is unknown why they initially withdrew requests for ‘demolition of an existing stable building’ to build the ‘one-bedroom annexe’ last year – however they have since reapplied over past weeks, and noted that the building will provide care for his parents Carol and Mark Sr.

The couple have also been documenting their renovation on their new ‘Wrighty Home’ Instagram page.

Speaking to fans during a recent Q&A, Mark admitted progress was being made, but an official moving in date was still a long way off. Responding to a fan who asked how the house was coming along, he wrote: ‘Coming along nicely thanks, but I just want to click my fingers and it be done.’ 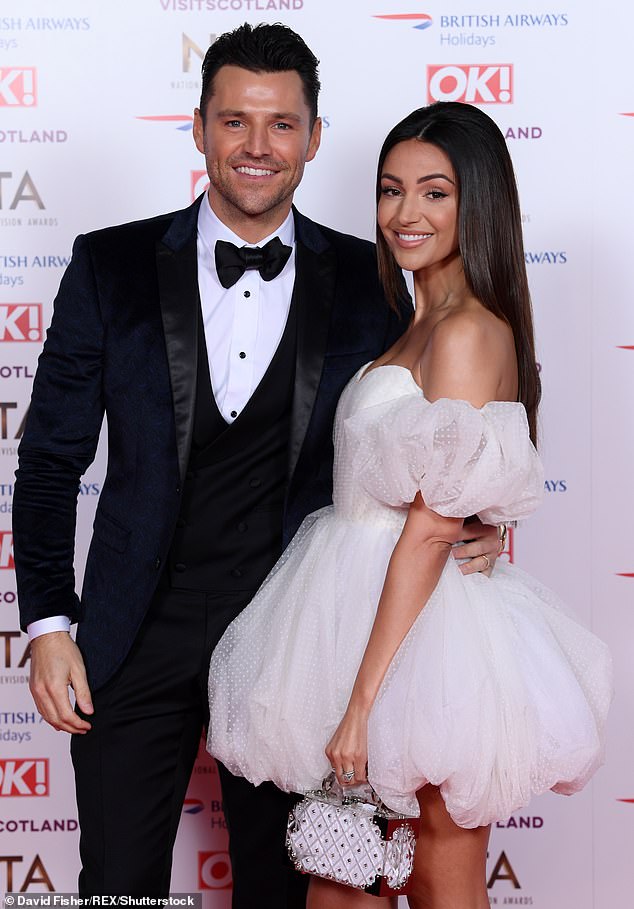 Abode: The couple purchased the property for £1.3million in 2019 and in January 2020, it was revealed that they were demolishing the four-bedroom farmhouse onsite for a lavish new five-bedroom mansion (pictured in 2019)