Molly-Mae Hague and Tommy Fury ‘consider buying a £25,000 attack dog for protection’ after being left shaken from £800k burglary

And Molly-Mae Hague and Tommy Fury are reportedly looking at purchasing a £25,000 attack dog to guard their new home in Cheshire, after they were victims of a £800k burglary at their Manchester flat last month.

Following the break in, the couple are said to not be taking chances after relocating to their new abode, which they renting for a whopping £12,000-a-month.

An inside source told The Sun: ‘Most of the footballers in the area have them [dogs] and the burglars just stay away because these animals are ferocious.’ 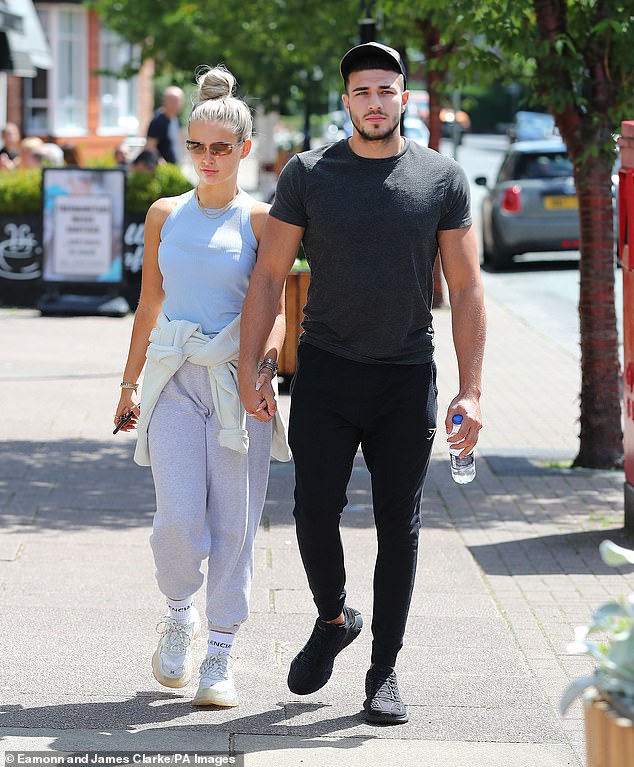 Protection: Molly-Mae Hague and Tommy Fury are reportedly looking at purchasing a £25,000 attack dog to guard their new home in Cheshire after their recent burglary (pictured in 2020)

They continued:  ‘As soon as the burglary was discovered, Molly said she’d never live in the flat again and that she wanted the security of living in a house.

‘But the prices for rent are crazy and they are looking to buy somewhere asap. Tommy also says he wants a guard dog because they are a real deterrent.’

Protection dogs come from police or military backgrounds, have high IQs and have been trained to hunt for drugs, bombs, and missing people.

MailOnline has contacted Molly-Mae and Tommy’s representatives for comment. 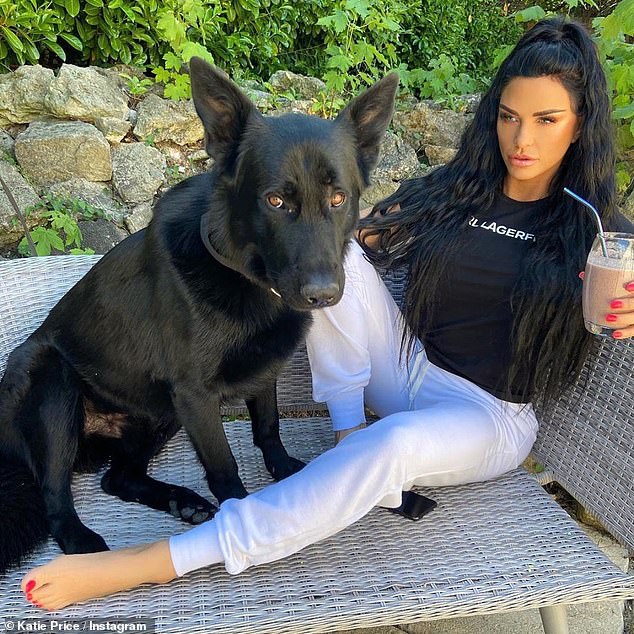 Safety: Katie Price is one of many celebrities who have protection dogs (pictured with dog Blade)

Emotional: It comes after Molly-Mae addressed the burglary incident in a YouTube video titled Let’s Talk on Monday

It comes after Molly-Mae addressed the burglary incident in a YouTube video titled Let’s Talk on Monday and admitted: ‘It was without a doubt the worst thing that’s ever happened to me.’

Wiping tears from her face, the blonde beauty also revealed she would be sharing less intimate details about her life moving forward, before adding of the robbers: ‘Karma will come for the people that did it. It’s evil.’

Molly could be seen sitting on the floor of her and Tommy’s new bedroom as she addressed her fans, telling them she would not be giving a tour of her new home, explaining: ‘For mine and Tommy’s safety I just can’t risk that anymore.’ 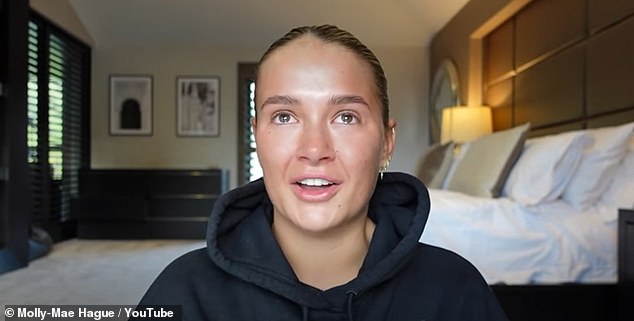 Addressing fans: Molly could be seen sitting on the floor of her and Tommy’s new bedroom as she addressed her fans, telling them she would not be giving a tour of her new home

She added she and her boxer beau left the old property as soon as they learned of the break-in, saying: ‘After what happened we haven’t stayed a night there since.’

Molly-Mae said: ‘Tommy and I were actually robbed. It was without a doubt the worst thing that’s ever happened to me – to us I’d probably say – and it was just awful, horrendous, terrible. So we’ve been dealing with a lot.

‘Our apartment was robbed, ransacked, emptied, you name it. What they said in the articles was true, they took everything. We were left with not a lot of stuff at all.

‘But I think seeing a lot of the things on social media and seeing a lot of people’s opinions about why we got robbed I started to think ”god was this my fault? Did I share too much? Did I do the wrong thing?” 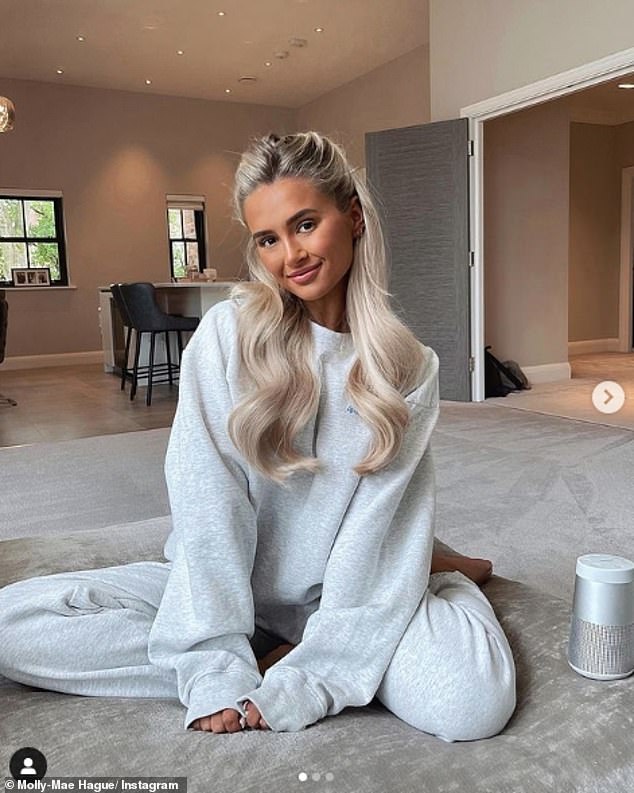 Sad: Of her and Tommy’s old apartment [pictured] Molly said: ‘I’ve never understood anyone to have an emotional connection with an apartment, it’s so strange’

‘That’s another thing I want to talk about in this video: how things are going to have to change now. At the end of the day, with a job like mine, my job is to literally share my life, that’s how I make a living.

‘I share every aspect of my life with you, things I buy, where I live, what I do with my boyfriend, where I’m going, it’s really hard to find that balance of sharing – so that you guys want to keep up with my life and see what I’m doing – but then also keeping my life private so that I stay safe.’

She noted: ‘I think I potentially lost that balance. Karma will come for the people that did it. It’s evil.’

When asked: ‘How are you feeling about not being able to go back home?’, Molly said: ‘Now, some of you may have realised from what I’ve been posting that we have moved, we left our apartment.’

£800,000 worth of designer goods and jewellery were stolen from the flat she shared with 22-year-old Tommy last month.

Sources revealed to MailOnline at the time that the couple would ‘never return’ to the property after being left ‘extremely shaken up’ by the crime.

A source told MailOnline: ‘Molly’s taking no chances – she’s hired 24/7 Confidentiality Protection as well as her other security. She has completely moved out of her apartment now and will never return…’

The insider said: ‘They will never return back to their apartment again unfortunately they feel they have been targeted and don’t feel safe there any more. They really loved living there its a shame they have been forced out of their home.’

While Molly Mae and Tommy partied in London, the gang descended on their block of flats, in which there are five other properties. 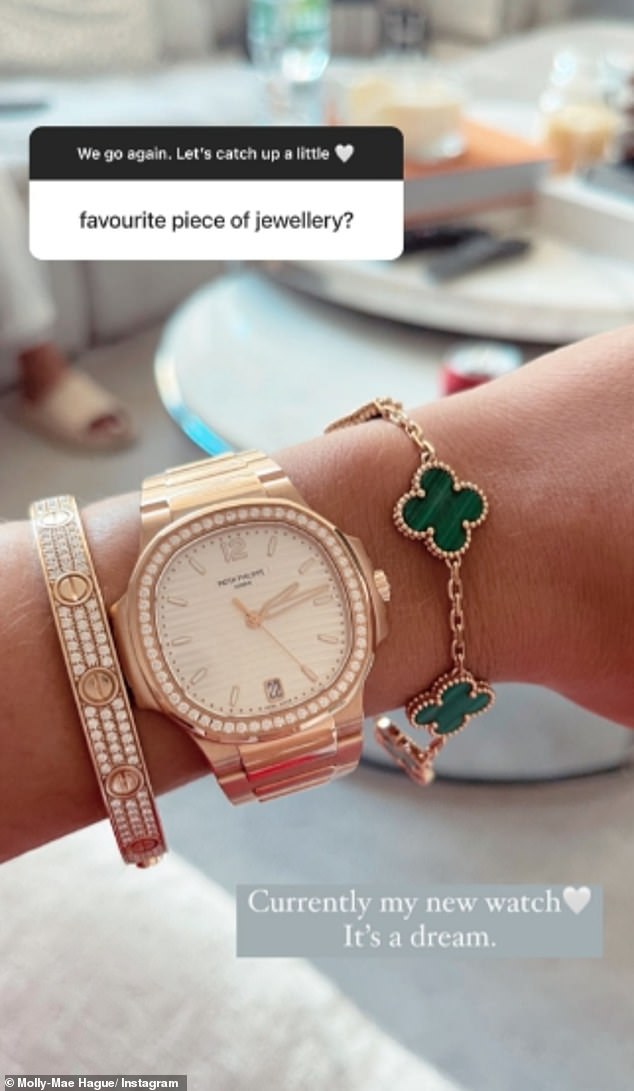 Possessions: £800,000 worth of designer goods and jewellery were stolen from Molly and Tommy’s flat, with the former admitting she will be more careful about what she posts