Monstered by Munchetty! BBC Breakfast sofa gets VERY uncomfortable as Naga sneers at co-host Charlie Stayt over item on pies

Frictions appeared to come to a head last week, during what should have been a light-hearted segment about the World Scotch Pie Championships.

As Mr Stayt, 59, explained the different categories, Ms Munchetty barked: ‘You can’t just sit here and read a list and not discuss the list.’ 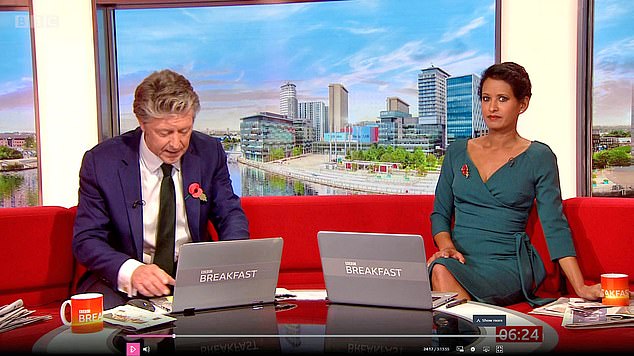 The tension between Breakfast presenters Charlie Stayt, 59, and Naga Munchetty, 46, did not go unnoticed by the show’s three million viewers

Her repeated interruptions were accompanied by a scornful look.

There were other awkward exchanges on Thursday’s programme.

When Olympic swimmer Adam Peaty was discussing his new suit and Mr Stayt said he wouldn’t ‘carry it off well at all’, Ms Munchetty chimed in: ‘Everyone agrees, by the way.’

The tension did not go unnoticed by the show’s three million viewers.

One took to Twitter to say they had to switch off over the way 46-year-old Ms Munchetty was ‘goading’ her co-host, adding: ‘I really don’t think there is any need. I find it very uncomfortable to watch.’

A third appealed to producers to stop putting the pair on together, adding: ‘It’s so awkward to watch… Naga can’t hide her distaste for him.’

The plea may have been heeded as Stayt was missing from Friday’s show, replaced by journalist Jon Kay.

A spokesman for the BBC said there is ‘no credibility’ in rumours of friction between Ms Munchetty and Mr Stayt.