Mossimo Giannulli is a free man… well, sort of. He was sentenced to serve five months in the United States Penitentiary, Lompoc, after pleading guilty to charges for his part in the college admissions scandal. Lori and Mossimo were accused of paying $500,000 to guarantee their daughters, Olivia Jade and Bella, admission into the University of Southern California as crew recruits.

According to People, he hasn’t reunited with his family yet. “Lori is relieved that he was released from the prison,” the insider says. “Mossimo is still in federal custody though.” 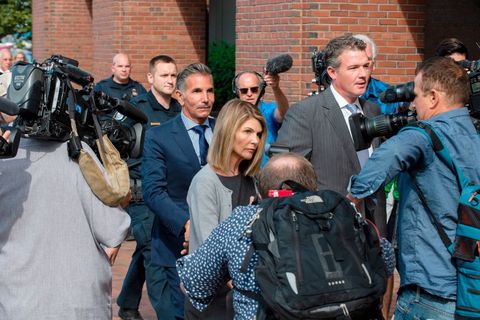 After Mossimo is relinquished from federal custody, he will be under home confinement to serve out the duration of his sentence. In August, a judge sentenced Lori to two months in federal prison, two years of supervised release, 1oo hours of community service, and to pay a $150,000 fine for her role in the scandal. Mossimo also struck a plea deal and was sentenced to serve five months in prison, two years of supervised release, 250 hours of community service, and pay a $250,000 fine for his involvement.

During Lori’s virtual sentencing, she made a statement regarding the crimes they committed:

You love all the deets on celeb couples. So do we. Let’s overanalyze them together. ✔️