Olivia Wilde, 38, and boyfriend Harry Styles, 28, keep it casual as they jet out of NYC

Olivia Wilde and Harry Styles kept it low key as they walked through the airport in New York on their way to catch a flight.

The 38-year-old Olivia and her 28-year-old beau were barely recognizable as they lined up to go through security.

The Life Itself actress was dressed casually in jeans, sneaker, a gray t-shirt and black jacket. 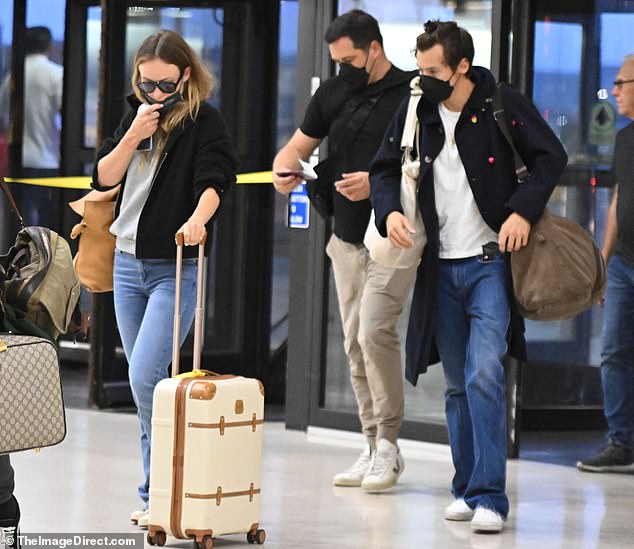 Low key: Olivia Wilde and Harry Styles kept it low key as they walked through the airport in New York on their way to catch a flight Sunday

The actress and director covered her face with a dark mask and sunglasses and wore her hair in loose layers.

The Grammy winning Harry was equally incognito in jeans, a white t-shirt, black coat, mask and sun glasses. The Kiss You singer pulled his hair into a top bun.

The very private couple have been dating since 2020 after working on the film Don’t Worry Darling. 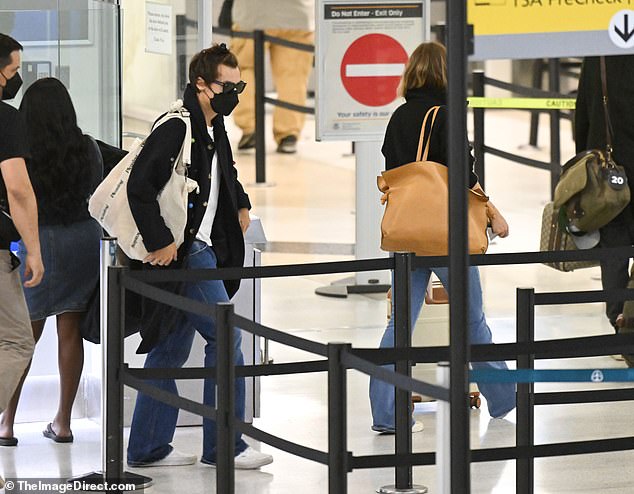 Olivia directed and starred in the thriller about a 1950s housewife living with her husband in a utopian experimental community who begins to worry that his glamorous company may be hiding some disturbing secrets.

The real-life couple are not paired up in the film. Instead Harry’s Jack is married to Alice, played by Florence Pugh, 26.

The film is scheduled for release in theaters September 23 and the proud director has been promoting it heavily to her 4.1 million fans on Instagram.

Coupled: Harry, 28 and Olivia, 38, have been dating since 2020, after working on the set of Don’t Worry Darling, which is scheduled for release in September

Harry is set to take to the stage Tuesday in London for the first in a series of concerts supporting his Harry’s House album.

He will travel through Europe for a good part of the summer, before heading back to the US for shows scheduled in New York, Chicago, Austin and Los Angeles.

Boss: Olivia directed the thriller and played a part in the film, which is set in a 1950s utopian experimental community. She has been promoting the film heavily on social media