Missing me yet, Harry? Olivia Wilde ditches her bra and slips into see-through dress after Styles heartbreak… and wins best movie for Don’t Worry Darling at People’s Choice Awards

Olivia Wilde left almost nothing to the imagination as the newly-single star hit the red carpet at the People’s Choice Awards in Santa Monica on Tuesday night.

She went braless beneath the see-through number but opted for black hot pants to conceal her lower half. 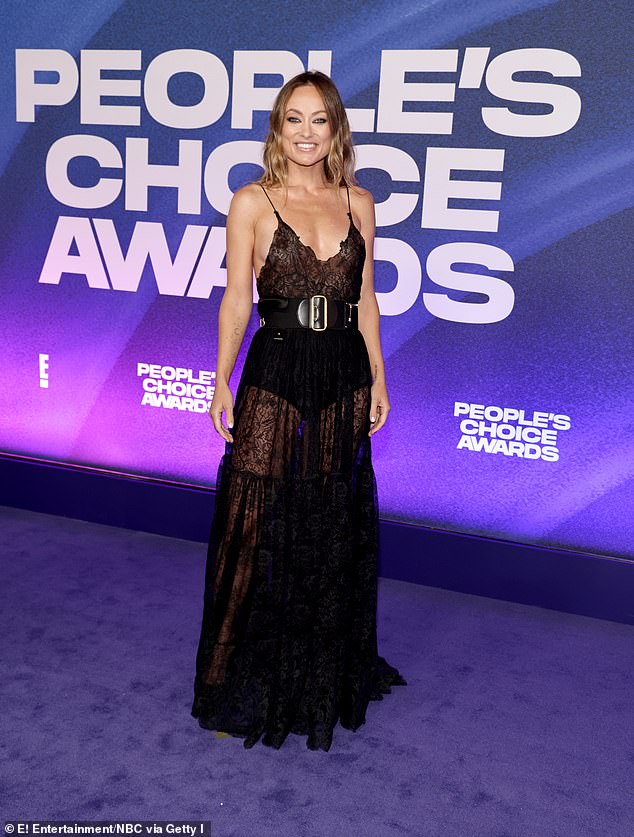 Woah! Olivia Wilde left almost nothing to the imagination as the newly-single star hit the red carpet at the People’s Choice Awards in Santa Monica on Tuesday night

The dress had ultra slender spaghetti straps and a ruffled skirt that flowed to the floor.

Olivia cinched in her already trim waistline with a thick black leather belt that had a large gold buckle.

Her honey-toned tresses were parted down the middle and styled in the House star’s signature beach waves.

Her lashes were lightly coated with mascara and her makeup artist ran a rosy pink shadow across her lids.

Olivia’s pout was drenched in pale pink lip gloss and her high cheekbones were dusted with a luminous peach blush. 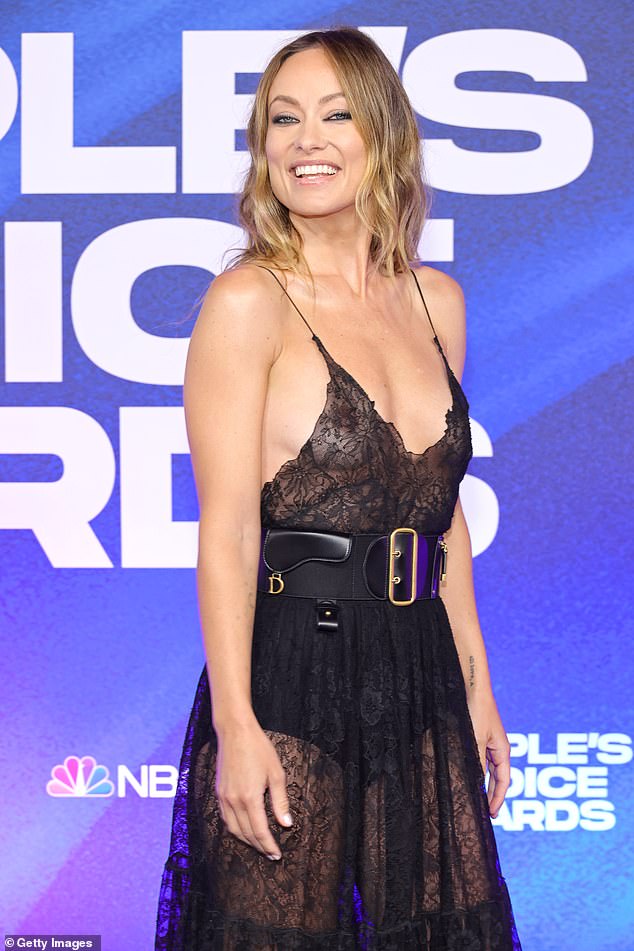 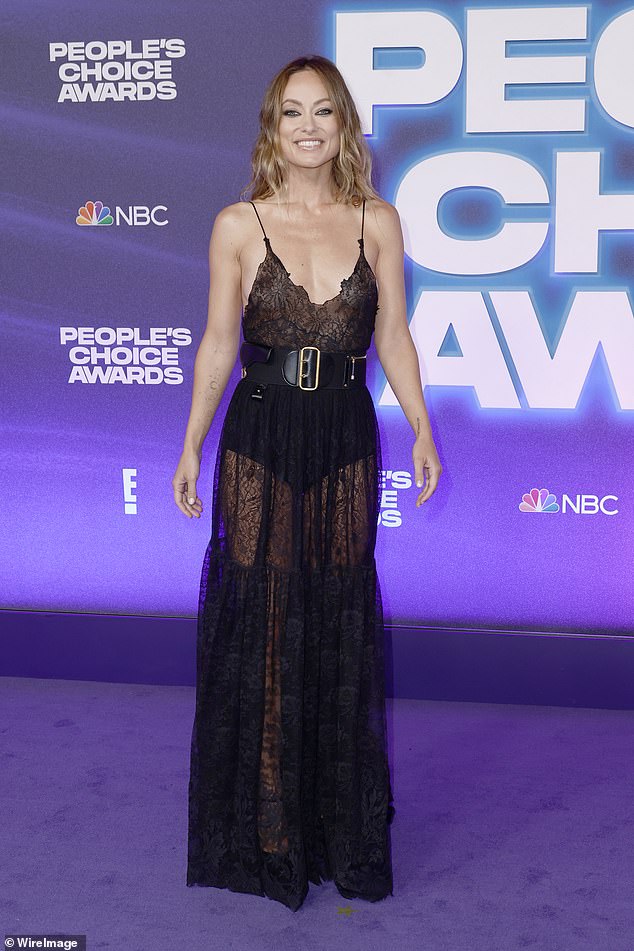 The mother-of-two beamed for shutterbugs as she braved the star-studded red carpet solo just weeks after ending her nearly two-year romance with Styles.

It was revealed in November that Olivia and Harry, who’d met on the set of her film Don’t Worry Darling in which he stars, had decided to take a ‘break’ due to their differing schedules and priorities keeping them apart.

Though it’s been reported that Harry and Olivia are still on friendly terms, a source told PEOPLE that being away from the singer has been ‘difficult’ for the actress.

They also said that Olivia was ‘disappointed’ by the way things turned out as she believed they’d be able to work through whatever issues they were experiencing. 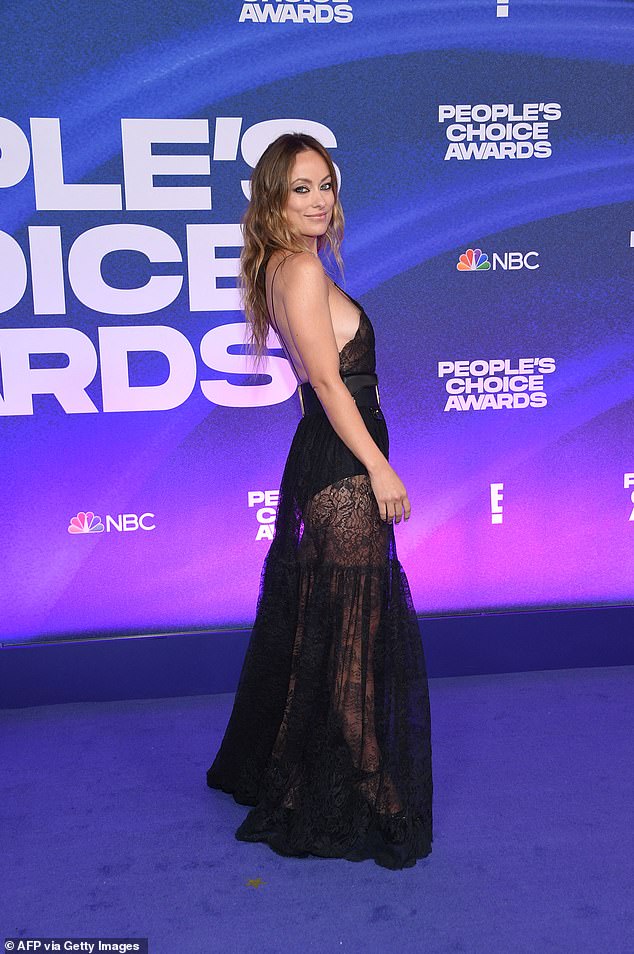 Beauty: The mother-of-two beamed for shutterbugs as she braved the star-studded red carpet solo just weeks after ending her nearly two-year romance with Styles

She and Harry got together in January 2021, just months after she announced her split from longtime fiance and the father of her two children, Jason Sudeikis, 47.

Don’t Worry Darling was panned by critics after its September release. Leading up to the release, rumors swirled about tensions between director Olivia and the film’s female lead Florence Pugh.

It was alleged that the pair butted heads on set, with one bombshell claim being that Florence had shared an ‘offscreen kiss ‘with Harry just weeks before he got romantically involved with Olivia.

Olivia, herself, did her part to shutdown the rumors, which she referred to as ‘untruths’ during one interview. 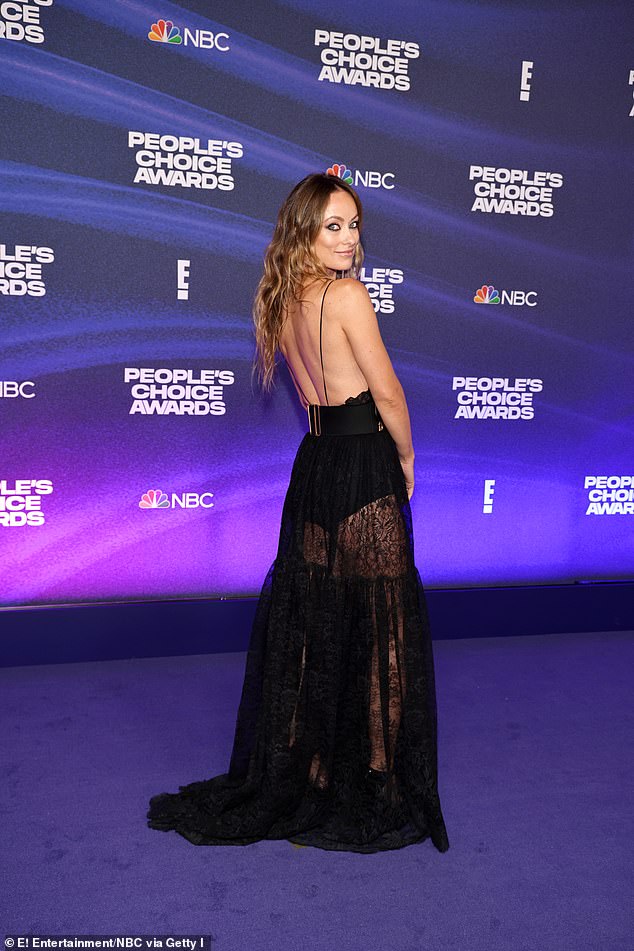 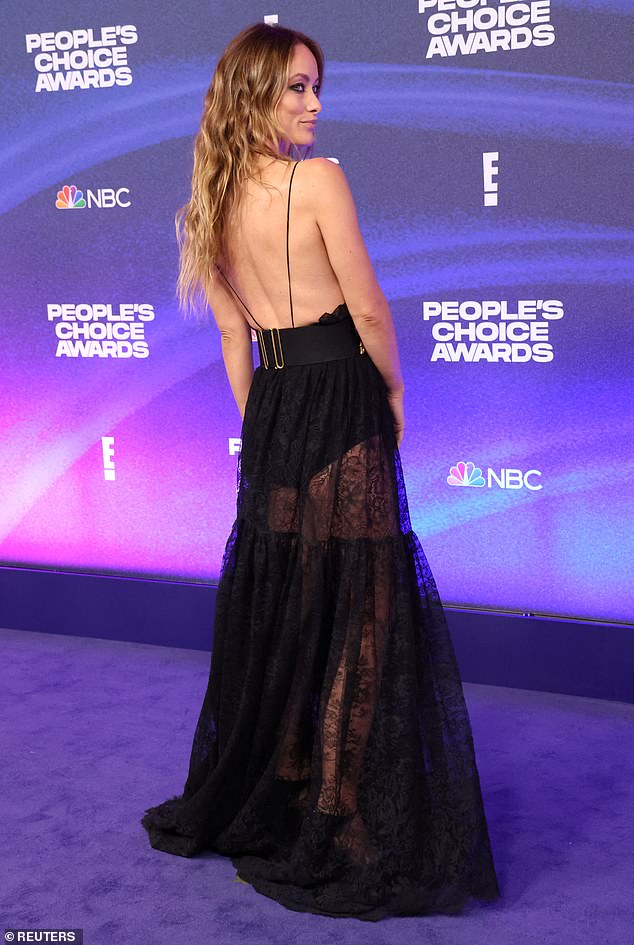 Beachy: Her honey-toned tresses were parted down the middle and styled in the House star’s signature beach waves

Later on in the evening Olivia accepted honors as Don’t Worry Darling was named The Drama Movie of 2022 during the show.

The movie prevailed in a field including Death on the Nile, Nope, Elvis, Halloween Ends, Luckiest Girl Alive, Scream and Where the Crawdads Sing.

Wilde said in her acceptance speech: ‘Thank you so much. Obviously, this isn’t for me, but it’s for the entire production. It is such an honor to accept it on behalf of our entire don’t worry darling family. 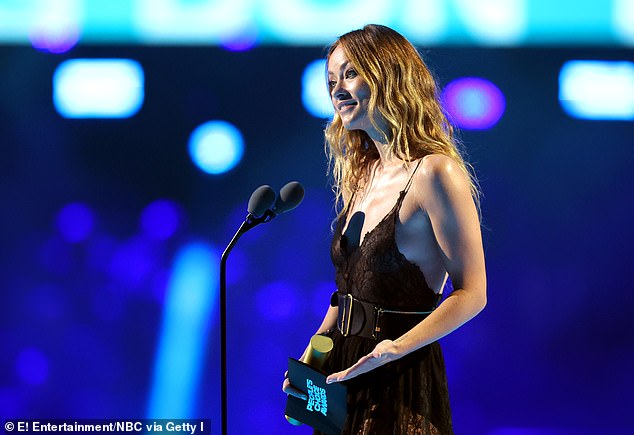 The latest: Director Olivia Wilde accepted the honors as Don’t Worry Darling was named The Drama Movie of 2022 at the People’s Choice Awards Tuesday in LA 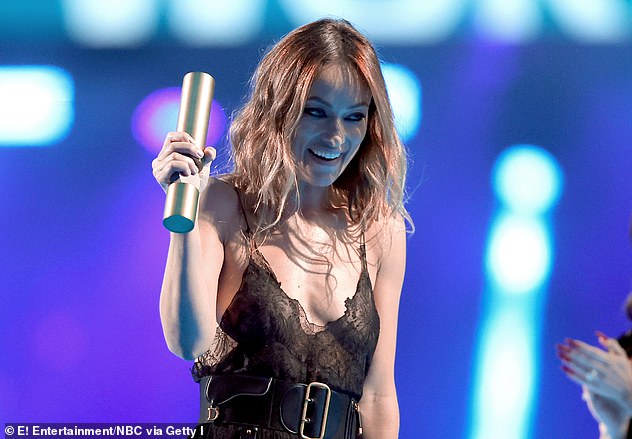 Wilde, who presided over the film, posed with a trophy she received for the honors

She added: ‘We made this movie in 2020 when many people were not confident that audiences would ever return to theaters if they ever reopened, yet … crew members showed up every single day during a pandemic to make something that they hoped that you got was show up for and he did show up and we are so grateful.

Harry and Florence are pitted against one another in the DRAMA MOVIE STAR OF 2022 category.

The 48th Annual People’s Choice Awards is hosted by Kenan Thompson for a second year in a row with the likes of Harry Styles, Taylor Swift, Bad Bunny and Beyonce all up for awards.

The star-studded event is once again held at the Barker Hangar in Santa Monica, California.

Winners are determined by fans who vote for their favorites in 40 different categories representing movies, television, music and pop culture. 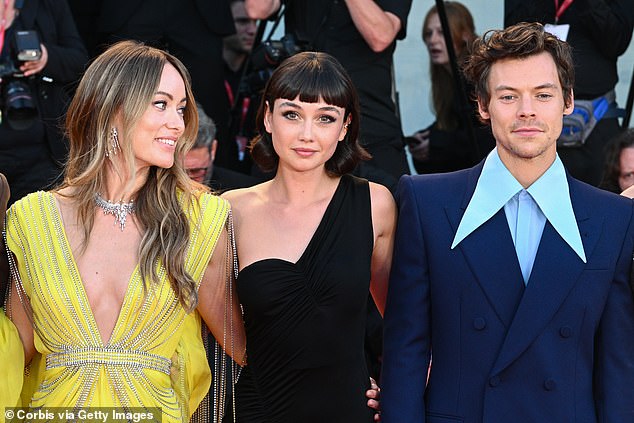 Taking a break: It was revealed in November that Olivia and Harry, who’d met on the set of her film Don’t Worry Darling in which he stars, had decided to take a ‘break’ due to their differing schedules and priorities keeping them apart; (L-R) Olivia Wilde, Sydney Chandler and Harry Styles in September

Several celebrities have already been named the recipients of awards recognizing their achievements in their industry.

Ryan Reynolds will be the recipient of the People’s Icon Award, an honor recognizing his work in film and television, while Lizzo will be bestowed with the People’s Champion Award, a trophy honoring her contributions in music and television, in addition to her work advocating for diversity and inclusivity across gender, race, sexuality, and size.

Shania Twain is also set to be honored with the Music Icon award. Fans can also expect to watch her perform a medley of her songs in addition to her latest track, Waking Up Dreaming. 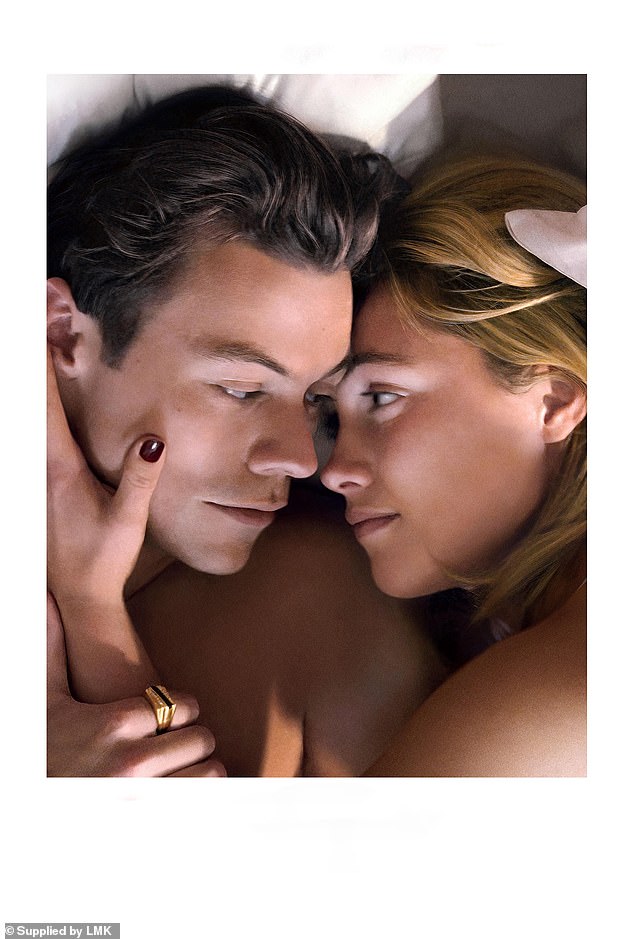 Don’t Worry Darling is among the films nominated at this year’s People’s Choice Awards. It landed in the DRAMA MOVIE OF 2022 category, along with the likes of Elvis and Halloween Ends

Host Kenan is also up for an award as a nominee in the comedy TV Star category.

Announcing his return as host, Kenan said: ‘I’m beyond excited to host the People’s Choice Awards again this year and celebrate the incredible talent and fans that this show unites.

‘I’m so grateful to be nominated – shoutout to the fans and congrats to all the nominees. Get ready for round two!!’

‘Last year, Kenan brought an irreplaceable energy to the People’s Choice Awards. His enthusiasm and passion for pop culture and the fans was palpable and translated in the room and on-screen,’ said Cassandra Tryon, SVP, Entertainment Live Events, NBCUniversal Television and Streaming. 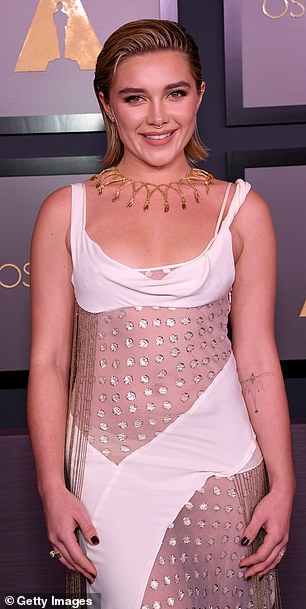 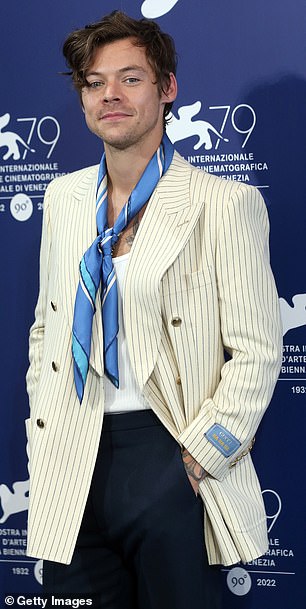 ‘We can’t wait to welcome Kenan back and see what he has up his sleeve for this year’s show.’

The 2022 People’s Choice Awards’ will air simultaneously on NBC and E! on Tuesday, December 6 at 9:00pm ET/PT.

Doctor Strange in the Multiverse of Madness (WINNER)

Doctor Strange in the Multiverse of Madness

Death on the Nile

Where the Crawdads Sing

Elizabeth Olsen, Doctor Strange in the Multiverse of Madness

Gal Gadot, Death on the Nile

Gal Gadot, Death on the Nile

Elizabeth Olsen, Doctor Strange in the Multiverse of Madness

House of the Dragon

Only Murders in the Building

Never Have I Ever

The Real Housewives of Atlanta

The Real Housewives of Beverly Hills

THE COMPETITION SHOW OF 2022

Dancing with the Stars

Lizzo’s Watch Out for the Big Grrrls

Kristen Bell, The Woman in the House Across the Street from the Girl in the

Maitreyi Ramakrishnan, Never Have I Ever

Selena Gomez, Only Murders in the Building

Kristen Bell, The Woman in the House Across the Street from the Girl in the

Maitreyi Ramakrishnan, Never Have I Ever

Selena Gomez, Only Murders in the Building

Live With Kelly and Ryan

Today With Hoda and Jenna

THE NIGHTTIME TALK SHOW OF 2022

The Daily Show With Trevor Noah

The Late Show with Stephen Colbert

THE COMPETITION CONTESTANT OF 2022

Charli D’Amelio, Dancing With the Stars

THE BINGEWORTHY SHOW OF 2022

The Thing About Pam

House of The Dragon

The Lord of the Rings: The Rings of Power

Panic! At The Disco

As It Was, Harry Styles

As It Was, Harry Styles

Yet To Come (The Most Beautiful Moment), BTS

THE COLLABORATION SONG OF 2022

Do We Have A Problem? Nicki Minaj X Lil Baby

BTS PERMISSION TO DANCE ON STAGE

Billie Eilish: Happier Than Ever, The World Tour

THE SOCIAL CELEBRITY OF 2022

Anything Goes with Emma Chamberlain

Not Skinny But Not Fat

Why Won’t You Date Me? With Nicole Byer