WHEN CHASE STOKES, 28, flew out to Charleston, South Carolina for an audition, he packed just two pairs of shorts, underwear, and three T-shirts. Having faced career rejection before, he assumed he wouldn’t stay long. “My bank account had just overdrafted and I couldn’t even afford an Uber from the airport,” Stokes says. “I had to ask someone in production to spot me some cash.”

Fortunately, this audition turned out to be for a part on Netflix’s murder mystery Outer Banks, a cultural phenomenon among the Gen Z crowd. Stokes snagged the lead role of John B only 20 minutes after his audition. “I never went back to L.A. after that, and all I had were the clothes I’d brought. I couldn’t even buy anything until I got my first paycheck.”

Growing up in both Orlando and Atlanta, Stokes played ice hockey and surfed. Much like his character, he says, he was the troublemaking class clown in high school. “We’d use a friend’s fake ID to buy beer or sneak into hotel hot tubs. At the time, I was going through my stepdad and mom’s divorce as the oldest of four, so I was angry and frustrated.” Also like his character, Stokes’s day-to-day uniform is all about basics that keep up with his athletic lifestyle: a buttondown, some Levi’s 501’s, and a pair of “beat-up” Converse. “John B’s style is a lot like mine, except his could probably use a good wash and dry.”

To prep for the (usually shirtless) role, Stokes spent hours in the gym, most days focusing on cardio. His goal wasn’t to bulk up to Marvel-like superhuman standards to play John B. “He’s just a kid, and his day job is cleaning a yacht,” he says. “It’s manual labor. I didn’t want to give unrealistic expectations to young kids.”

With season 2 of Outer Banks out on Netflix on July 30, Stokes says the greatest perk of newfound fame is connecting with his fans—both famous and not. “Snoop Dogg’s manager told me he watches the show,” he says. “I was like, all right, when am I going to snap back into reality?” 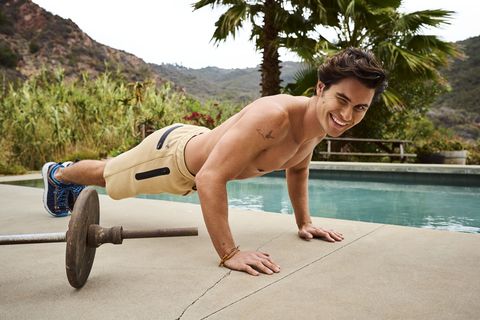 The first season of Outer Banks became a huge hit. When was the moment you realized that it was so popular?

Because we were on lockdown, the only barometer we had was social media. And we just kept seeing numbers climb. Then we would watch the numbers on Netflix. They would let us know where else in the world we were trending, and at one point we were number one in something like 20 countries in one week. That was a really cool moment.

What did you think about the show when you first went into it?

When I first heard about Outer Banks, I thought it was a reboot of The Goonies. I’ve always been a fan of The Goonies, and rebooting it with the characters at an older age didn’t feel like the right thing to do. Thankfully, the casting director, Miss Lisa Finncannon, had cast me in my first role ever, and we’ve stayed in touch and have a beautiful relationship. My agent called me one day and said, “Miss Lisa wants to talk to you about this project.” So I got on the phone with her and she was like, “Look, it’s not The Goonies. I’ll let you read the pilot. Just take a peek. I know the guy who created and he’s a beautiful soul, and I know exactly what he’s going to do with it.”

I read the script for the first episode, and I immediately responded to Miss Lisa and I was like, “I’m so sorry. You’re right. I would love to read for this.” So I got on a plane to Charleston, but my bank account had just overdrafted and I couldn’t even afford an Uber from the airport. I had to ask somebody in production to spot me some cash. The next day, we had the network test, and I got a call 20 minutes afterwards that I got a job. I never went back to L.A. after that, and all I had were the clothes I’d brought. I couldn’t even buy anything until I got my first paycheck. I had three pairs of underwear, two pairs of shorts, and three t-shirts. 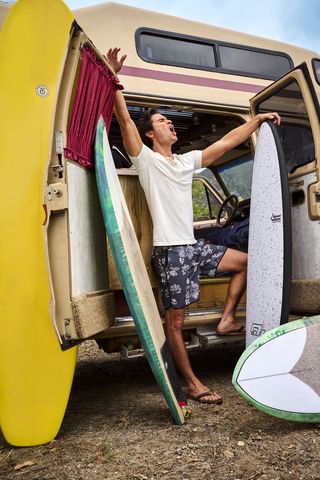 You’ve talked before about how you couch surfed and slept in a car before Outer Banks? What was that time in your life like?

I did the morning announcements in high school, and I had this reputation as being the one dude who didn’t take it very serious. I was just trying to help people to enjoy first period, which is not exactly an enjoyable time. A teacher suggested I should get into acting. So I did some commercial stuff to make some extra cash when I went to college. Then one day I went on IMDb, and I emailed everyone at CAA, WME, UTA, you name it. And I got a couple responses. One of the agents at the time told me to come out to LA, so I did, I stayed on his couch for a little bit. I slept in my car for a little while. A friend I met in an acting class let me sleep on his couch for a little bit. After that, I went back and I finished my bachelor’s and then jetted right back out to LA and finally got an apartment. LA has a reputation of testing your will and mental strength, and did pretty much every job under the sun to make money. But there was a point where I was on unemployment, there were eviction notices on the door, the power was turned off and on. I was two months late on rent when I left for Charleston to shoot Outer Banks. So it was a journey.

What was the strangest gig you took during that time?

I was bartending at this restaurant and the owner was trying to figure out how to grow his audience on social media. I completely BS the guy into believing that I could help and that knew what I was doing—and mind you, I was horrible and still am horrible at social media. But I convinced him to pay me extra to come in and shoot food photography and all this other content. He bought into it for four months and it worked until he realized I had absolutely zero ideas what I was doing. And then I got fired. So. 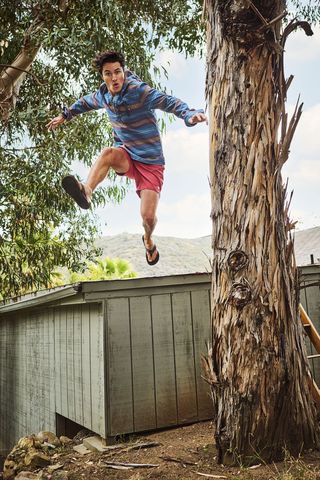 Surfing is obviously a big part of the show, and you had some experience with that, right?

I grew up in Orlando, about 35 minutes from Cocoa Beach. So in high school, me and my friends would go every weekend. We would dig holes in the sand and put our surfboards over top. We’d use a friend’s fake ID to buy beer or sneak into hotel hot tubs. At the time, I was going through my stepdad and mom’s divorce as the oldest of four, so I was angry and frustrated. So the Pogue life was sort of similar to some of the things that I was getting away with in high school myself. Then Outer Banks actually went down to 16th Street in Cocoa Beach to shot all the surfing stuff there. So it was a very cool full circle moment for me to go back to the beach where I grew up wreaking havoc.

How would you describe your high school self?

We moved back and forth from Atlanta and Florida, so it was a lot of change, a lot of anxiety. I was bullied pretty bad my first two years of high school. One kid put laxatives in a drink, and I had to run home because my bowels were exploding. I was battling severe cystic acne, and that was really tough. And then around the end of sophomore year, I starting to getting in the weight room, getting into fitness, and getting into shape. I learned more about how to treat my skin, so my skin began to clear up. I grew up playing ice hockey—my stepdad is from Minnesota, and he was sort of a prodigy in the hockey world—and people started seeing my talents in hockey too. I began to friends with some of the athletes in high school, I fell into TV production classes, and became little bit of a class clown. After that, I felt a little more confident.

Ralph Lauren gave its iconic polo the ultimate upgrade. Made entirely from plastic, the Earth Polo uses a waterless dyeing process that helps the planet, resulting in a shirt that looks good even without a Zoom filter.

Summer happy hours call for a breathable shoe you can wear from the office to the bar. This one by Rothys fits the bill, with an upper made from recycled plastic and an ankle collar stuffed with cushy yarn.

You could lift weights or pound the pavement in these water-repellent cotton shorts by Fair Harbor, made from 11 upcycled plastic bottles. Or you could just chill by the pool. Everyone needs a little downtime.

What were your fitness goals for the show, knowing that you’d spend a lot of it without a shirt?

At first your ego says, Get a six pack, get as lean as possible, and look like a Greek god. But I realized that this is a kid who grows up in a house that probably doesn’t have the best food around, he’s dealing with the stress of the world, and I didn’t want to create a false image of what that would look like. I stayed pretty religious with cardio, and I tried to embody what his life would look like. He’s just a kid, and his day job is cleaning a yacht. It’s manual labor. I didn’t want to give unrealistic expectations to young kids. The show has a big audience of younger people who are trying to figure out how to feel comfortable within themselves. I hate when the world gives unrealistic expectations of what our body should look like—I dealt with the toxic masculinity in athletics my whole life. I understand the feeling of body dysmorphia, where you feel like you’re never in the shape that you want to be, or you never look as good as you could. So I kept that in the back of my mind as we were working.

Your Men’s Health shoot was partly inspired by your character John B’s beach style on the show. How does your own style compare?

I would say we share some similarities. John B’s style is a lot like mine, except his could probably use a good wash and dry. I definitely have a casual style—t-shirts, Levi’s, some beat up Converse. One of my friends from back in Florida, has a clothing company called Duvin Design, and in my first fitting for Outer Banks, one of the shirts that became an iconic John B shirt was a Duvin shirt. And I hadn’t told our costume designer anything about the relationship. The shorts that I wore in pool shots [of this Men’s Health shoot] is by a company called Katin, and we use them in the show all the time too. I actually showed up to the photoshoot wearing one of their sweatshirts. So it was like all the worlds coming together, and that was cool.