The 40-year-old hotel heiress’ wild weekend was complete with late night zip lining at Area 15, an upscale stay and dinner party at Resorts World and of course VIP transportation.

The wedding — which she had previously teased would be a ‘three-day affair,’ — is set to take place in a matter of weeks and will be filmed for her upcoming 13-part docuseries Paris in Love. 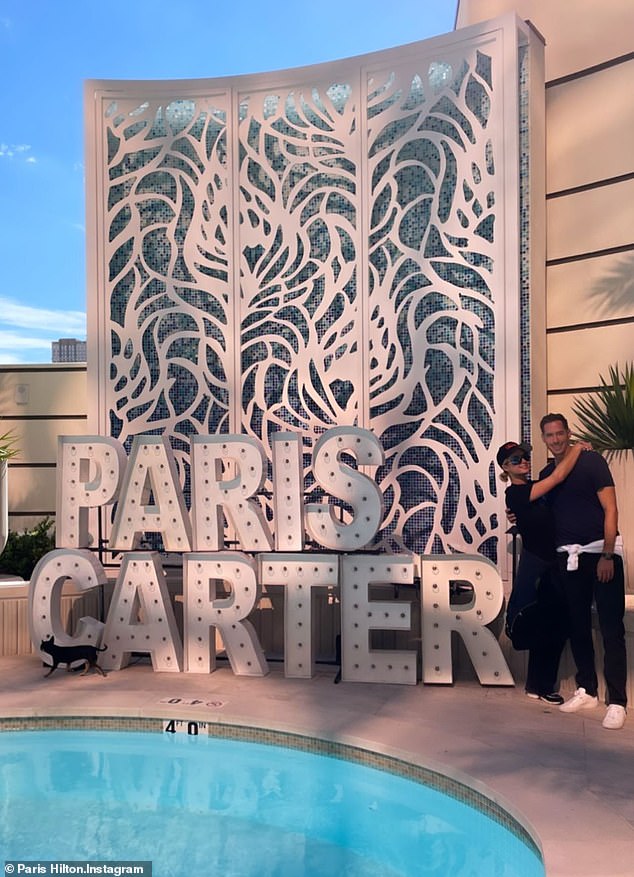 Last fling before the ring! The 40-year-old hotel heiress enjoyed a lavish joint bachelor/bachelorette party with fiance Carter Reum in Las Vegas that was complete with late night zip lining and an extravagant dinner party

The reality star and DJ opted for a neon look on Friday evening that included a yellow sundress with a neon green bag and hefty diamonds.

Festivities kicked off as she touched down via private jet with her close inner circle, which included sister Nicky Hilton and Carter’s sister Courtney, before they were whisked away in a red Rolls Royce.

After checking into the Resorts World hotel they enjoyed a night on the town at the immersive entertainment complex, Area 15, where she ziplined, posed with extravagant performers. 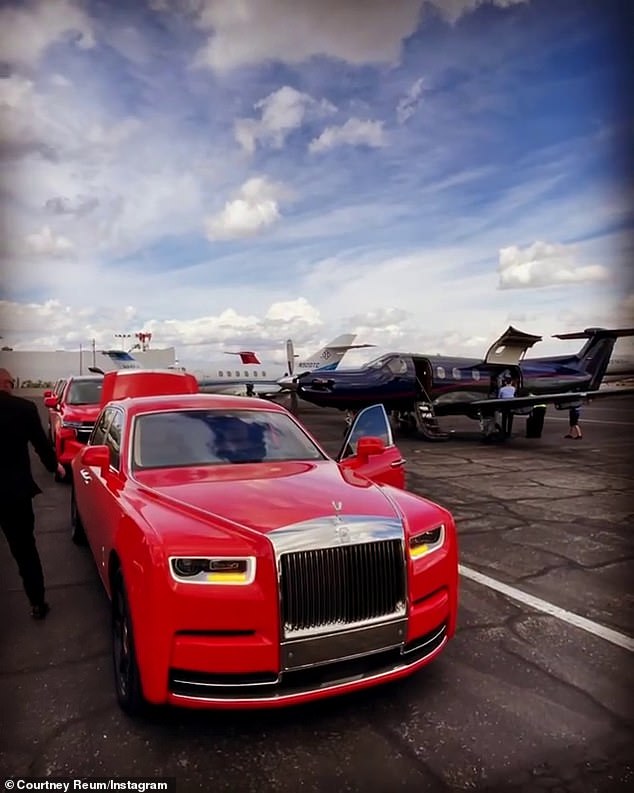 Arriving in style: Naturally Paris touched down via private jet and headed straight into a red Rolls Royce 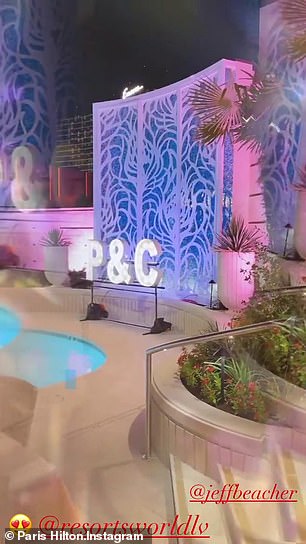 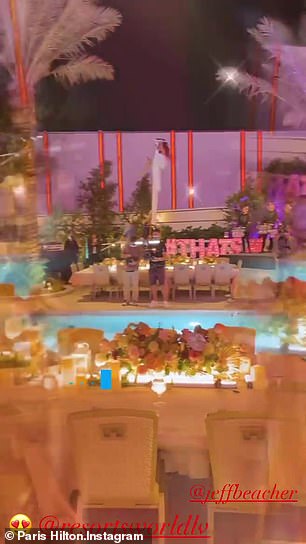 Dinner time: At she and Carter’s palatial sweet — which came complete with a private pool and terrace — a lavish dinner party was thrown in their honor 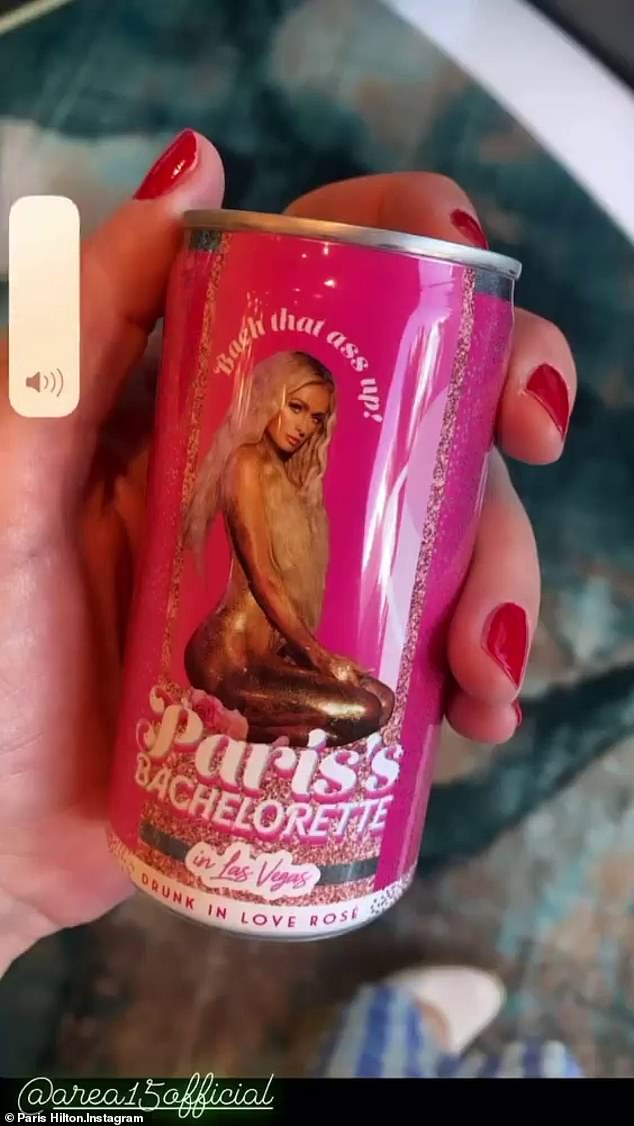 Drunk in love: Party accessories included a custom pink can of ‘drunk in love’ rose with her image on it that said ‘Paris’s Bachelorette’

Paris and her crew did not skimp on details as party accessories included a custom pink can of ‘drunk in love’ rose with her image on it that said ‘Paris’s Bachelorette.’

At she and Carter’s palatial sweet — which she dubbed a ‘beautifully decorated palace’ came complete with a private pool and terrace — a lavish dinner party was thrown in their honor.

Decorations included centerpieces full of colorful roses, and large signs that said both of their names, with an additional reading ‘That’s hot.’

She thanked good friend and media mogul Jeff Beacher for having his show performers from back in the Beacher’s Madhouse days perform at her Vegas bonanza. 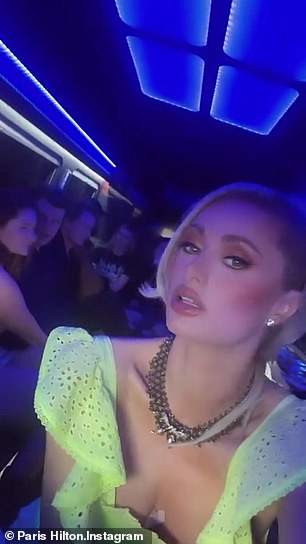 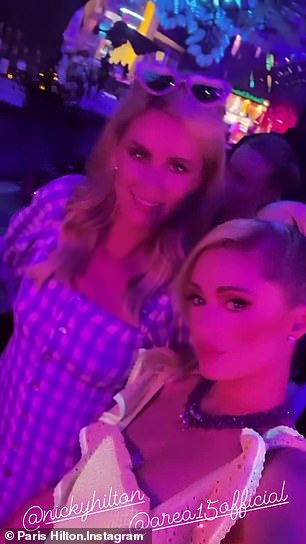 Party time: She was seen in a limo with her close inner circle of friends which included sister Nicky Hilton and Carter’s sister Courtney 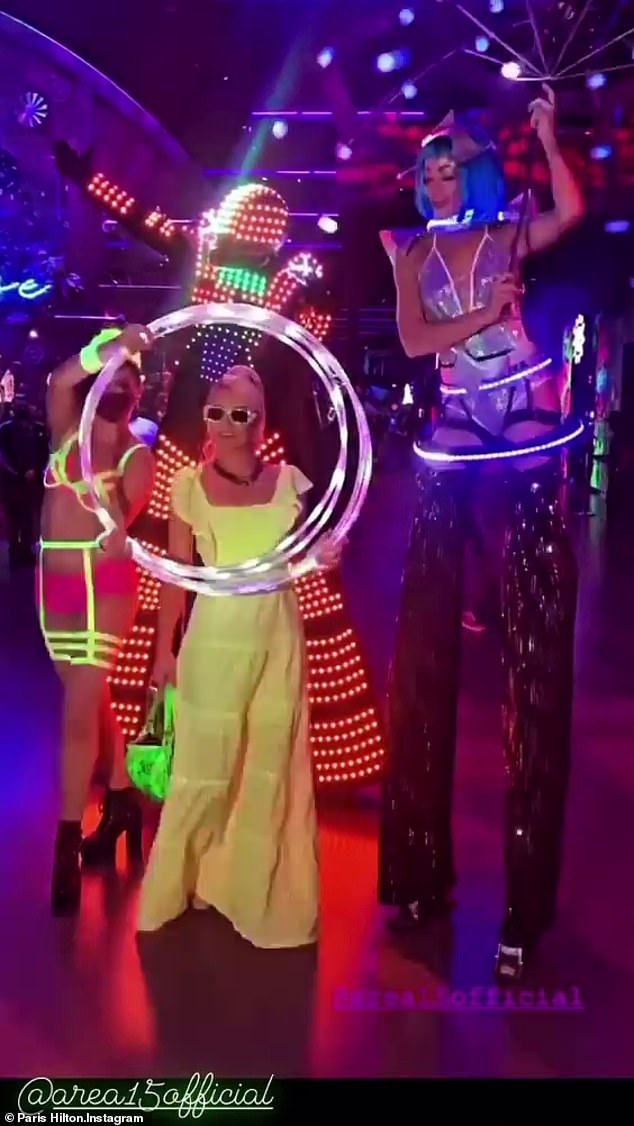 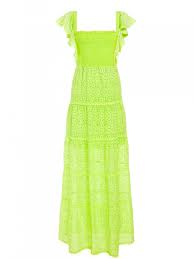 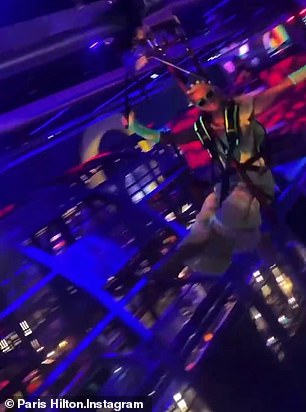 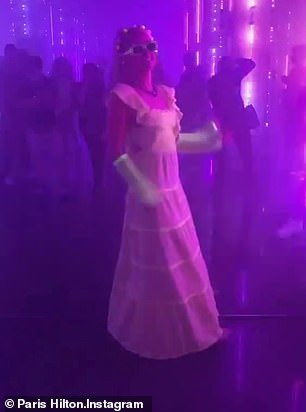 Swinging good time: At one point she was seen climbing onto a zipline 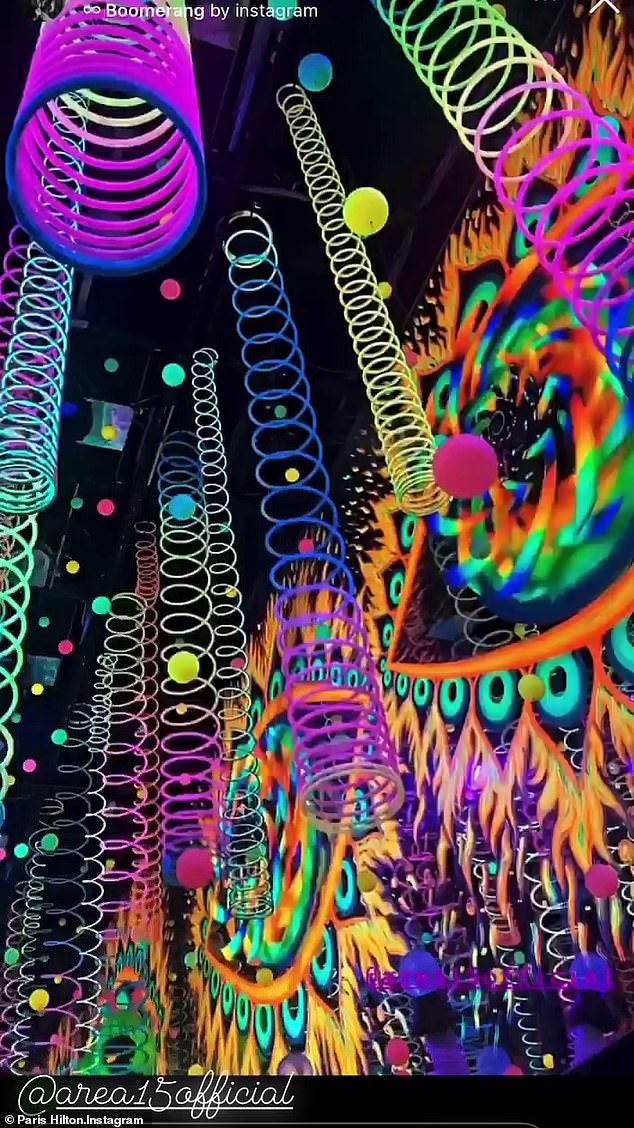 Woah: The group headed to Area 15, an immersive entertainment space complete with games, ziplining and entertainers

And after a wild good time on Friday evening, it appeared that she and Carter were ready to get back home to life in Beverly Hills and continue their wedding planning.

Reum popped the question in February with a 15-20 carat engagement ring estimated to cost nearly $2M, following nearly a year-and-a-half of dating.

Though they had known each other for 15 years, things only turned romantic following a Thanksgiving dinner party in 2019, where she confessed to feeling this ‘incredible chemistry’. Following their official first date, they have never spent a night apart.

In her engagement post she wrote: ‘When you find your soulmate, you don’t just know it. You feel it…There’s no one I’d rather spend forever with.’ 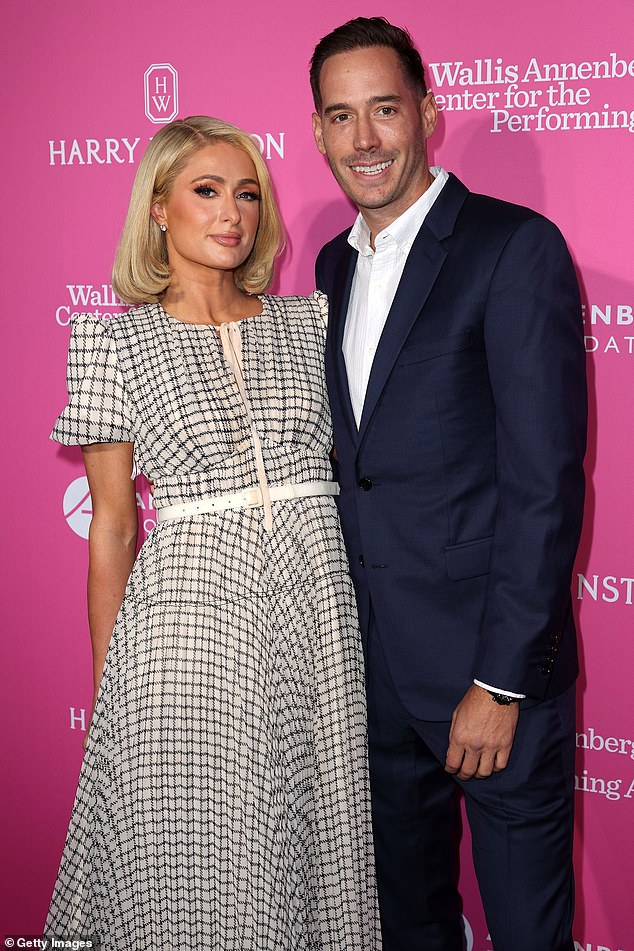 Getting down to business: Of planning the nuptials, The Cooking With Paris star told Extra : ‘It’s been the most exciting and romantic time in my life — I just can’t wait for the wedding’; pictured with Reum, a venture capitalist, September 24 in Beverly Hills

Of planning the nuptials, The Cooking With Paris star told Extra: ‘It’s been the most exciting and romantic time in my life — I just can’t wait for the wedding. It’s stressful planning it.’

And in the joint conversation mom Kathy Hilton shared she had been planning the entire wedding, as she called Paris a ‘very easy-breezy’ bride before joking it was Carter that was the difficult one.

The lavish destination wedding — which Kathy accidentally revealed will include a carnival (among other things) — is being filmed for Paris’ upcoming Peacock series.

‘I’m going to have the most incredible wedding video, because we have all the memories leading up to it.’ 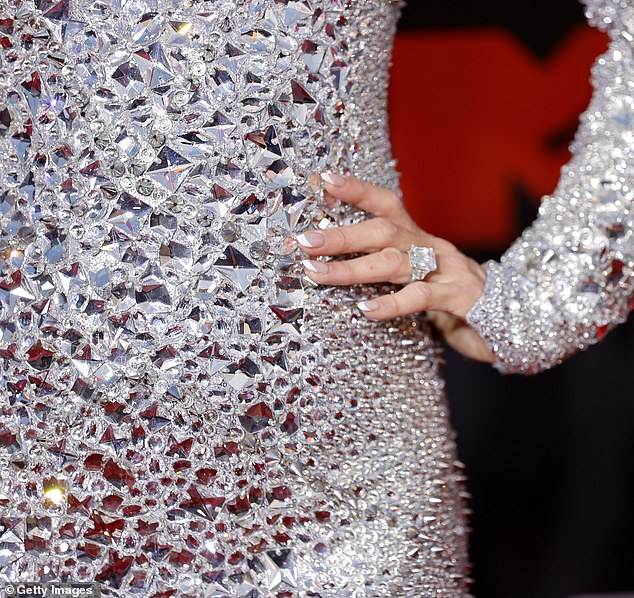 The ring: Aptly named ‘The Paris’ her engagement ring is estimated to be between 15-20 carats and worth anywhere from $1M to $2.5M; pictured September 12