Lauren Goodger has revealed she’s expecting a girl, after learning of her baby’s gender ahead of her summer arrival.

The former TOWIE star, 34, is expecting her first child with her boyfriend Charles Drury, 23, and has been sharing everything from birth plans to post-partum fears.

And in interview with new! magazine, the star said: ‘I’m a girls’ girl, so it’s amazing for me. I love the fact I’m having a little girl – my little girl. I can dress her how I want and do all the girly things,’ 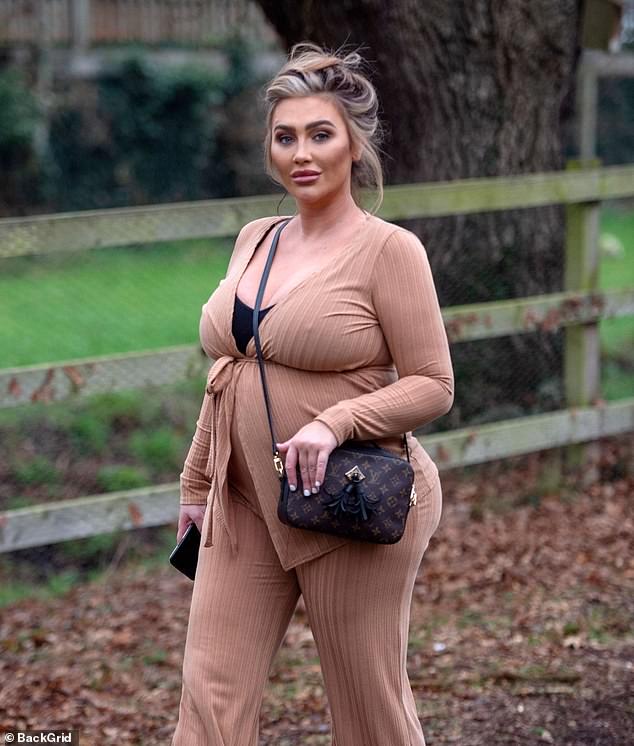 She continued: ‘People say, “I couldn’t see you with a boy.” But I do really want a boy as well, I’m just really happy I’m having a girl – a mini-me!’

While finding out the gender of one’s child is usually a surprise for expectant parents, Lauren insists she knew she was expecting a girl all along – thanks to a tip from fortune tellers.

Lauren said: ‘I knew, didn’t I?! I didn’t know, but I knew. I would have been more shocked if it was a boy. When she said I was having a girl it just confirmed what I thought I knew. 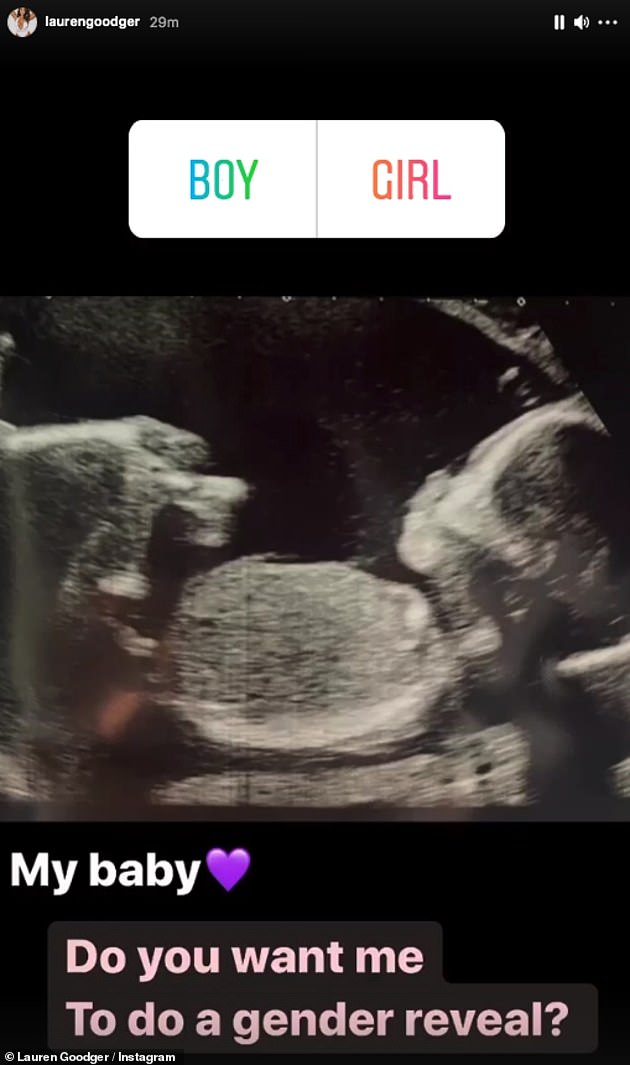 Spilling the beans: The former TOWIE star had previously asked her Instagram followers if they wanted her to do a gender reveal

Lauren recently revealed that she is considering a water birth rather than the conventional alternative of giving birth in a hospital bed.

The TV personality , thinks having a water birth would help her have the ‘calmest labour for herself and her baby’.

A water birth is when the pregnant woman is in a birthing pool filled with warm water for at least part of their labour, delivery, or both.

It can take place in a hospital or at home with medical staff on hand to help the woman deliver their baby.

Lauren, who is around 22 weeks pregnant, took to Instagram stories to ask mums who have had a water birth what their experience was like. 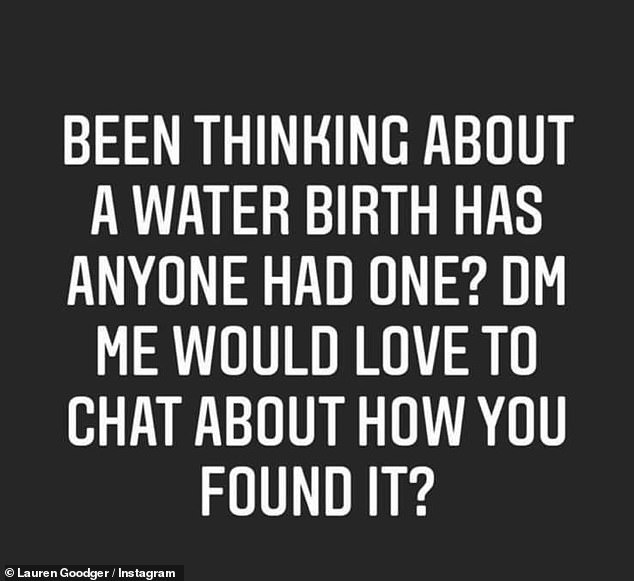 Advice: Lauren, who is 20 weeks pregnant, took to Instagram stories to ask mums who have had a water birth what their experience was like

She wrote: ‘Been thinking about a water birth has anyone had one? DM me would to chat about how you found it?’

A source told MailOnline: ‘Lauren is taking her birth really seriously having seen other people having water births and thinks it could be for her.

‘She thinks it seems calming and wants the calmest labour for her and her baby.’

Just last month, Lauren admitted that she found the first three months of her pregnancy ‘quite difficult’ due to sickness and nausea.

During an Instagram Q&A, she answered questions about her journey into motherhood, including her baby’s name, a gender reveal and plans for labour. 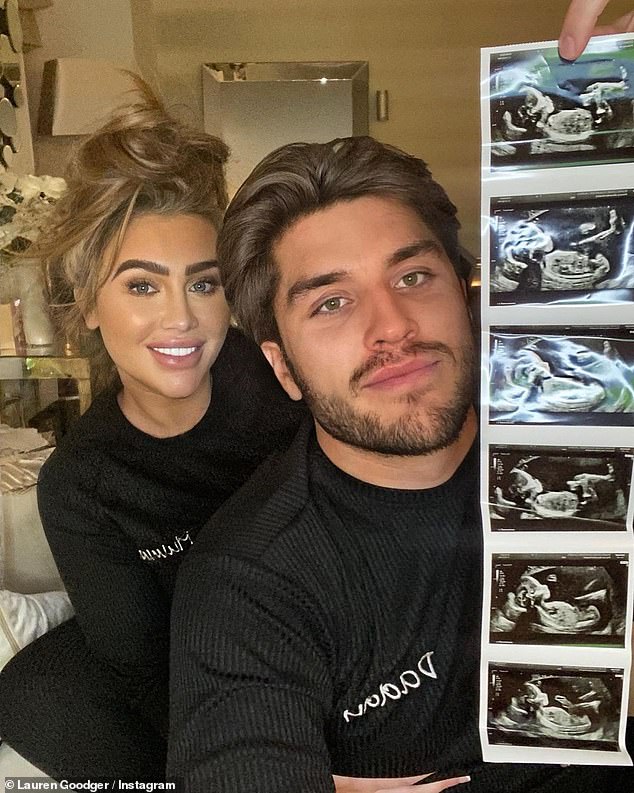 Parents-to-be: Lauren confirmed her relationship with Charles last year and moved him into her Essex pad, just three weeks after dating

She also responded to criticism regarding her decision to share her private life online, as she teased a potential return to reality TV.

Lauren said: ‘[I] Found it quite difficult for the first three months. It’s just over as well and it’s just starting to get better so yeah, just tired still, but not the sickness.’

Later on, she elaborated on her feelings of nausea: ‘I felt very, very sick but wasn’t actually sick all the time. I have been sick a few times, or just had the feeling, I would rather have been sick because it’s a mental release.’

Lauren confirmed her relationship with Charles last year and moved him into her Essex pad, just three weeks after dating. 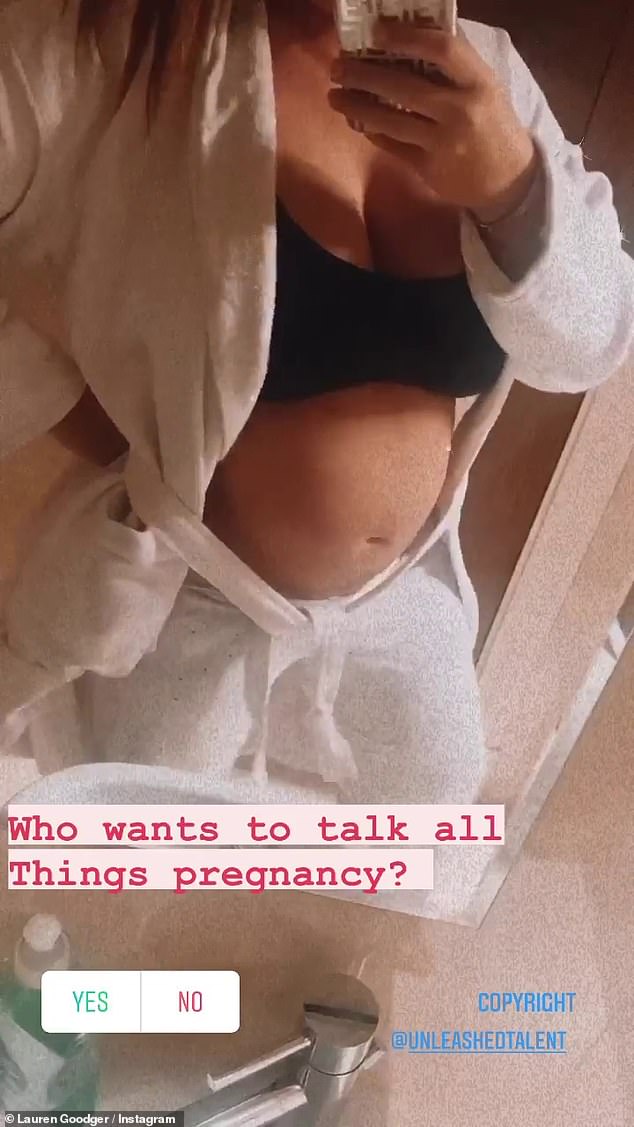 Sharing her pregnancy journey: Lauren is 22-weeks pregnant and eagerly awaiting the arrival of her little one

Water births are a popular alternative to giving birth in air because many mothers find the feeling of being submerged in hot water means they experience less pain during contractions and the birth itself.

Water births work because the breathing reflex is triggered by the change in temperature as the baby is born and the sensation of air on the skin.

This means that, provided the baby remains fully submerged in warm water, they continue receiving oxygen through the umbilical cord until they surface meaning they do not drown.

While there is no clear statistical evidence that babies born in water receive heath benefits, that means the opposite is also true – that there are no clear negative effects either.

However, water births are usually not recommended for mothers who have suffered complications during their pregnancy because the baby may need to be monitored with sensitive electronic equipment that cannot go in the pool.

Water births are also not recommended for very overweight mothers who may struggle to get out of the pool should their birthing plan need to change quickly.

If undertaking a home water birth, efforts should be taken to keep the water below 37C. A higher temperature risks overheating the baby and causing undue stress.

While lower temperatures are not recommended, this is largely because it negates many of the benefits to the mother – such as increased comfort – rather than because it could harm the child.