PICTURE EXCLUSVE: Pregnant Molly-Mae Hague displays her growing baby bump in a figure-hugging grey dress before changing into activewear for a photoshoot

She’s gearing up to welcome her first child with boyfriend Tommy Fury.

And Molly-Mae Hague displayed her growing baby bump in a number of figure-hugging ensembles as she posed up a storm for a photoshoot in London.

The PrettyLittleThing creative director, 23, looked radiant as she modelled the brand’s upcoming maternity range in London on Wednesday. 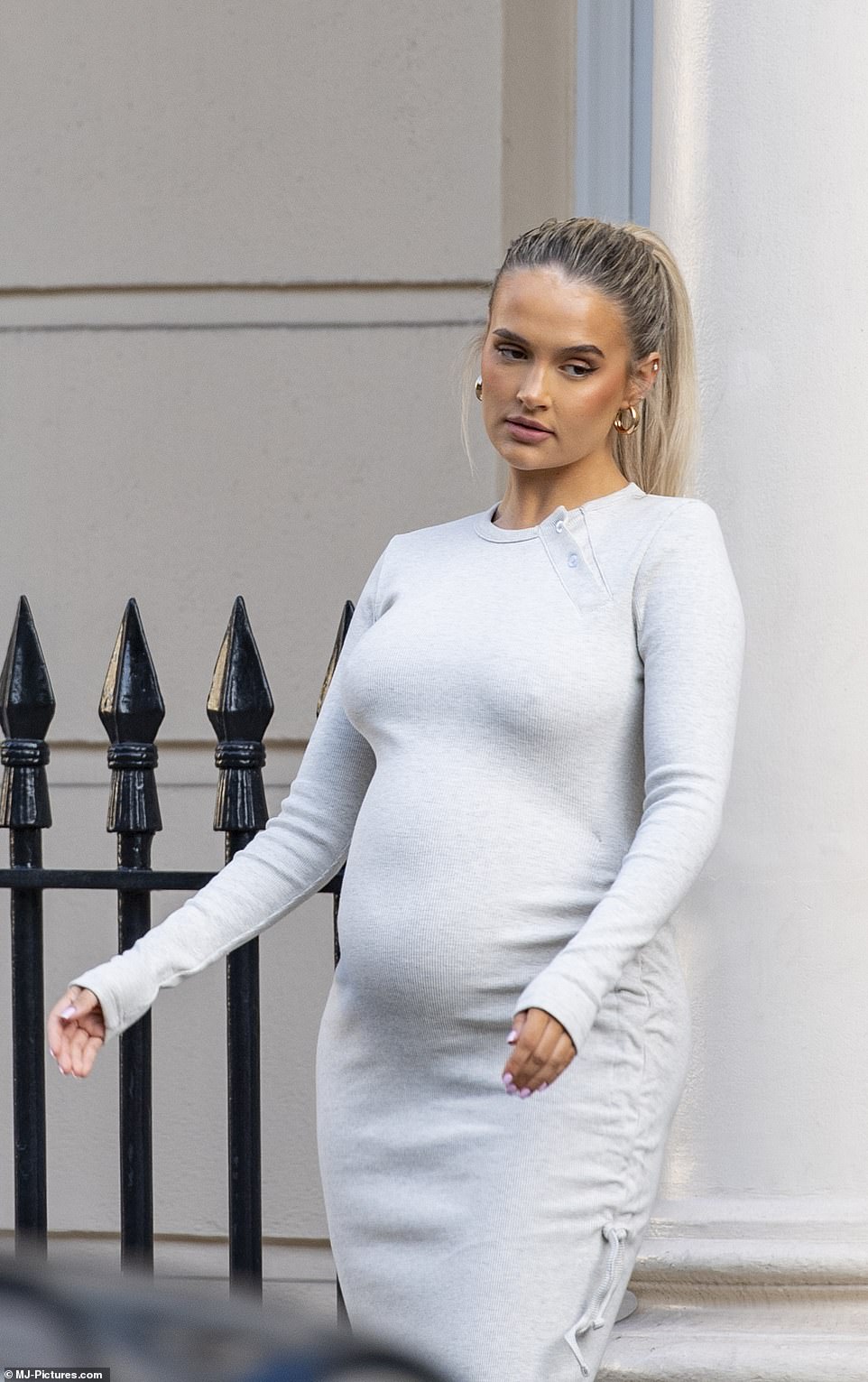 Mum-to-be: Molly-Mae Hague, 23, displayed her growing baby bump in a number of figure-hugging ensembles as she posed up a storm for a photoshoot in London

Molly-Mae slipped into a fitted grey midi-dress with ruched sides and chunky white boots for her first look.

She pulled her bright blonde locks back into a high ponytail and accessorised with a pair of gold hoop earrings.

Switching up her outfit, Moly-Mae then changed into a stretchy workout top with matching teal leggings. 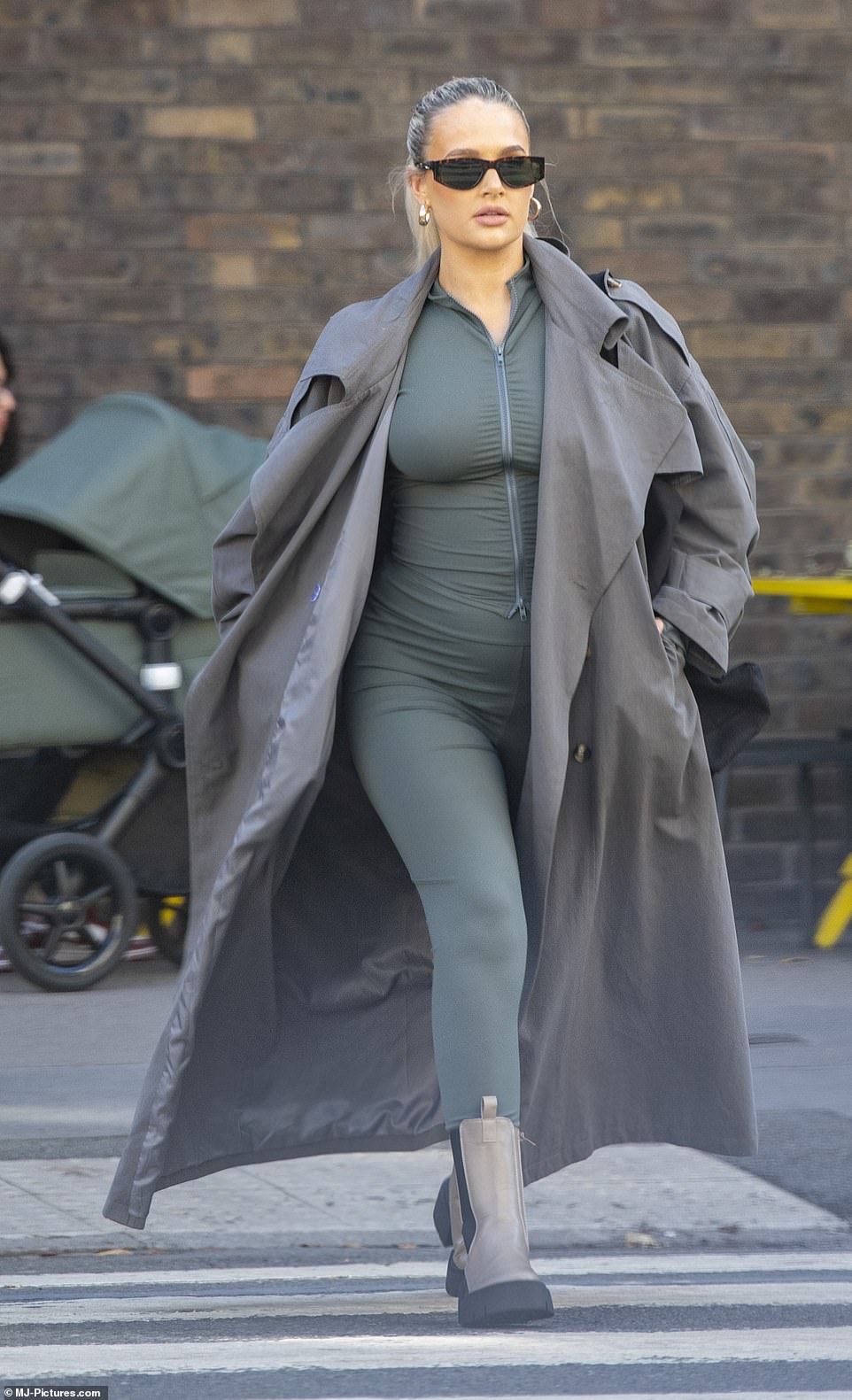 Fashion forward: She later shielded her eyes with some rectangular sunglasses and strutted across the road

Molly-Mae revealed she wasn’t letting her pregnancy slow her down as she shared a snap while hard at work.

The YouTuber hinted that she was working on another project with PrettyLittleThing as she teased that she’d ‘shot something exciting.’

Molly and Tommy have been in a relationship since meeting on Love Island in 2019, the couple exceeding expectations after viewers misjudged their commitment to each other. 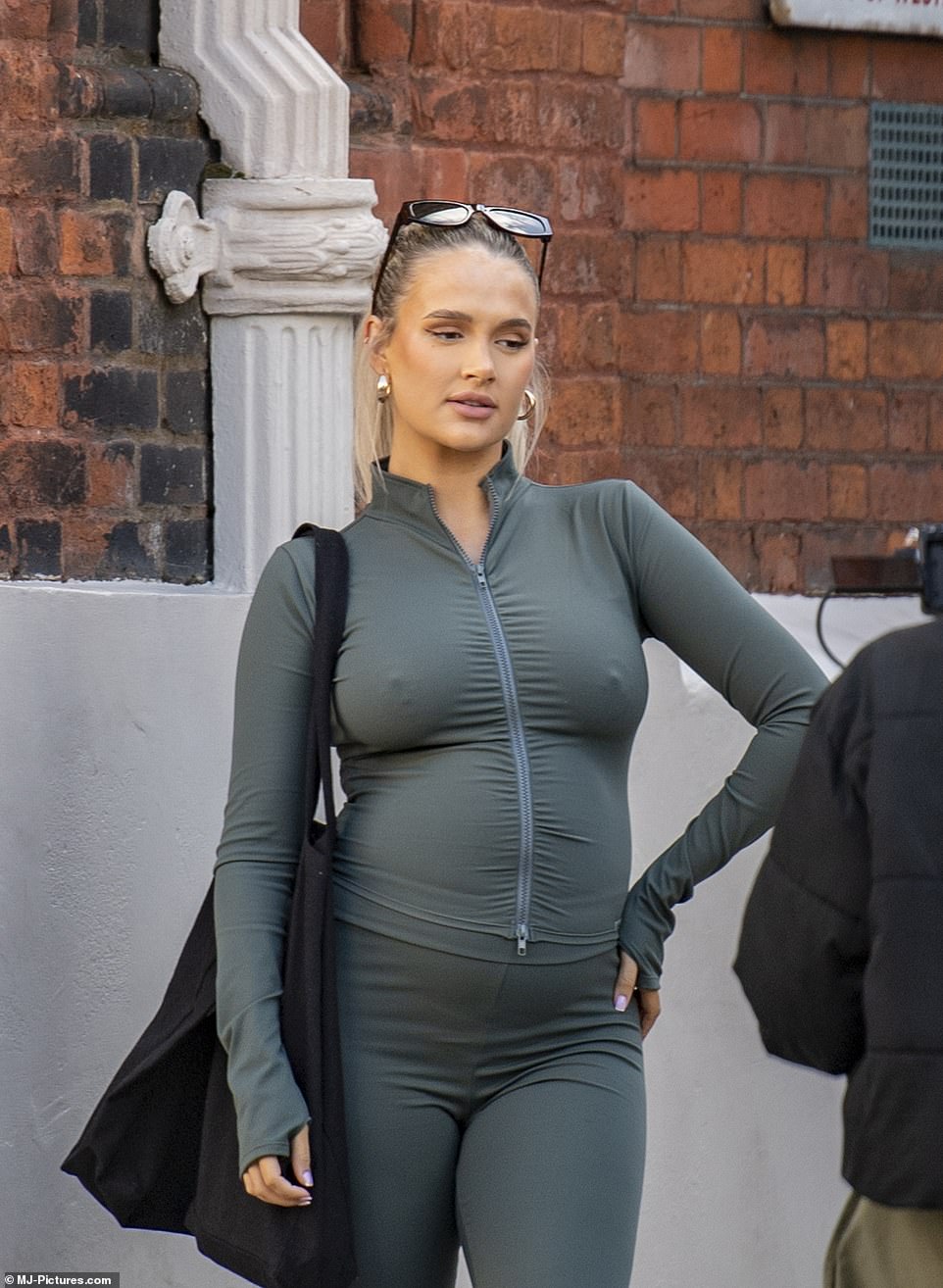 Glowing: She opted for a radiant makeup palette complete with bronze eyeshadow and a nude lip

Switching it up: Her other outfits included a black ribbed dress with a thigh-high leg split and a chic shearling jacket that she teamed with a pair of cuffed trousers 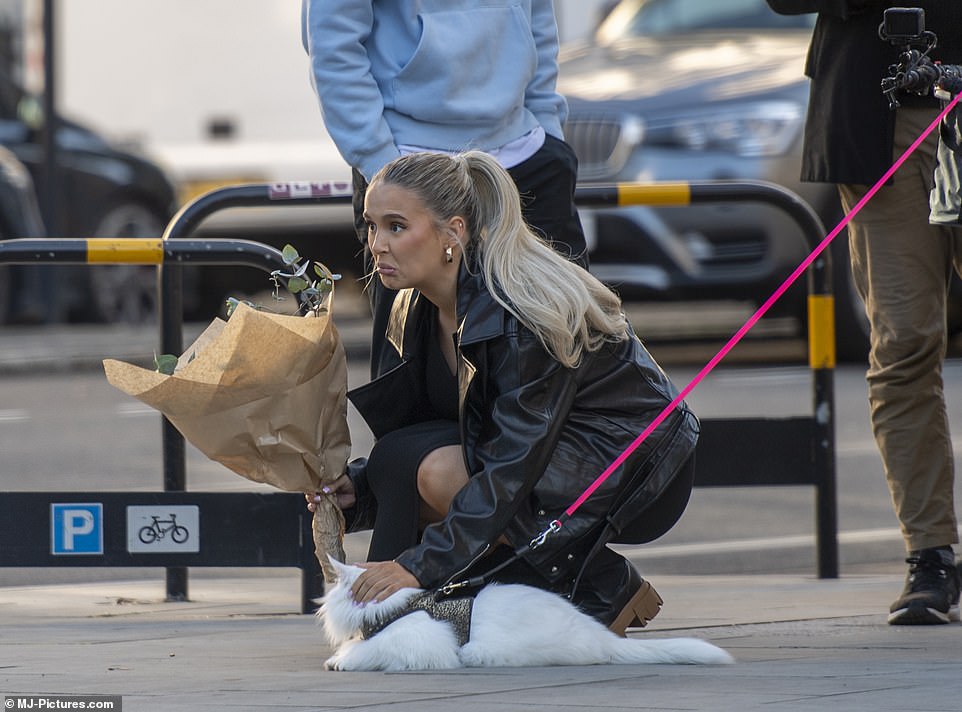 Taking a break: Molly-Mae petted a fluffy white cat in between takes

The couple moved in together in September 2019 and have been going from strength-to-strength ever since.

They announced earlier this month that they are expecting their first child together – a baby girl.

The pair announced the gender of their expected arrival with a sweet video last week, posting it to their respective Instagram accounts.

Elegant: Another sleek ensemble consisted of a pair of wide leg trousers with a longline blazer as she cradled her growing bump throughout the shoot 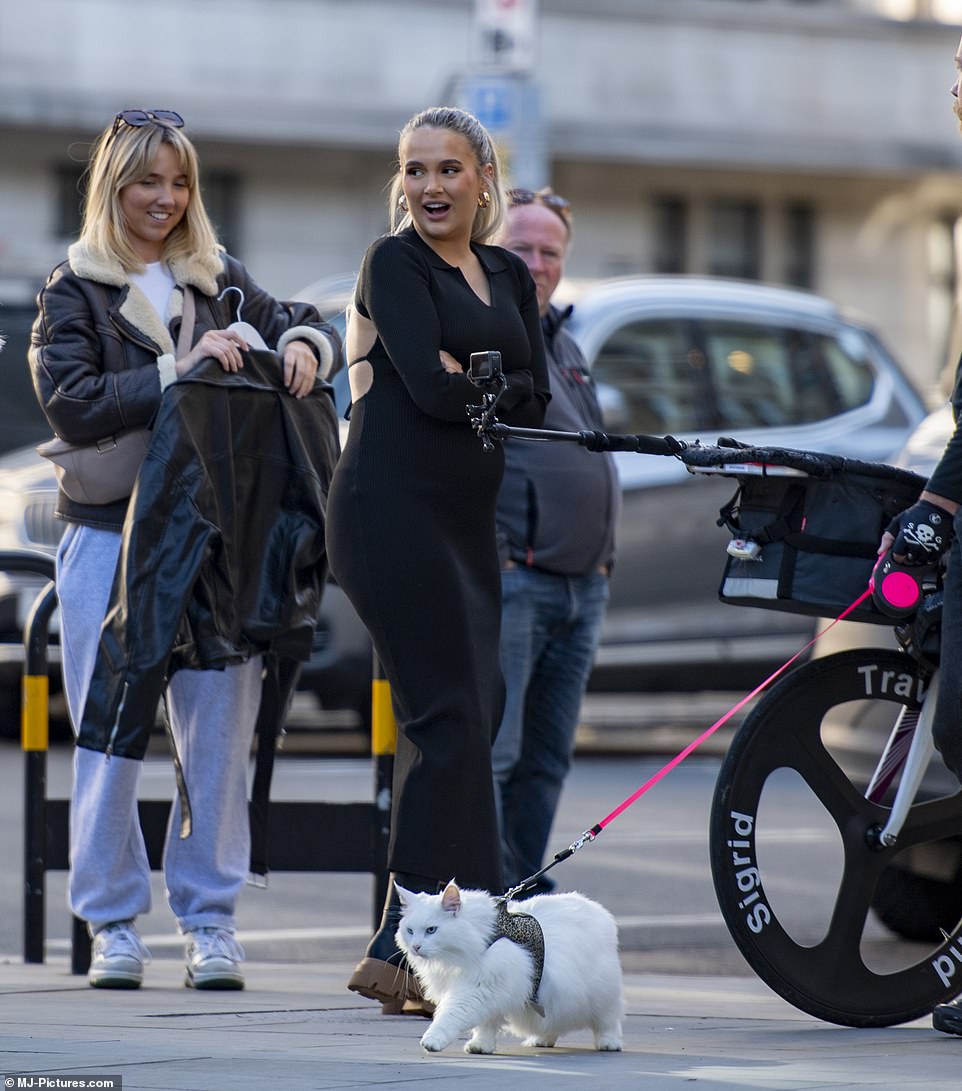 So cute: Molly-Mae was elated at the sight of the pet cat on a bright pink lead

Popping a balloon to find out, the pair were overjoyed upon learning they were expecting a girl – with pink confetti bursting out.

Molly-Mae also revealed this week that she is six months along, sharing her first pregnancy vlog to YouTube.

Documenting her 20-week scan in the pre-recorded video, Molly-Mae explained: ‘I’m currently 21 weeks pregnant at the moment, I can’t believe it. I can’t believe that it’s been a month since our last scan. 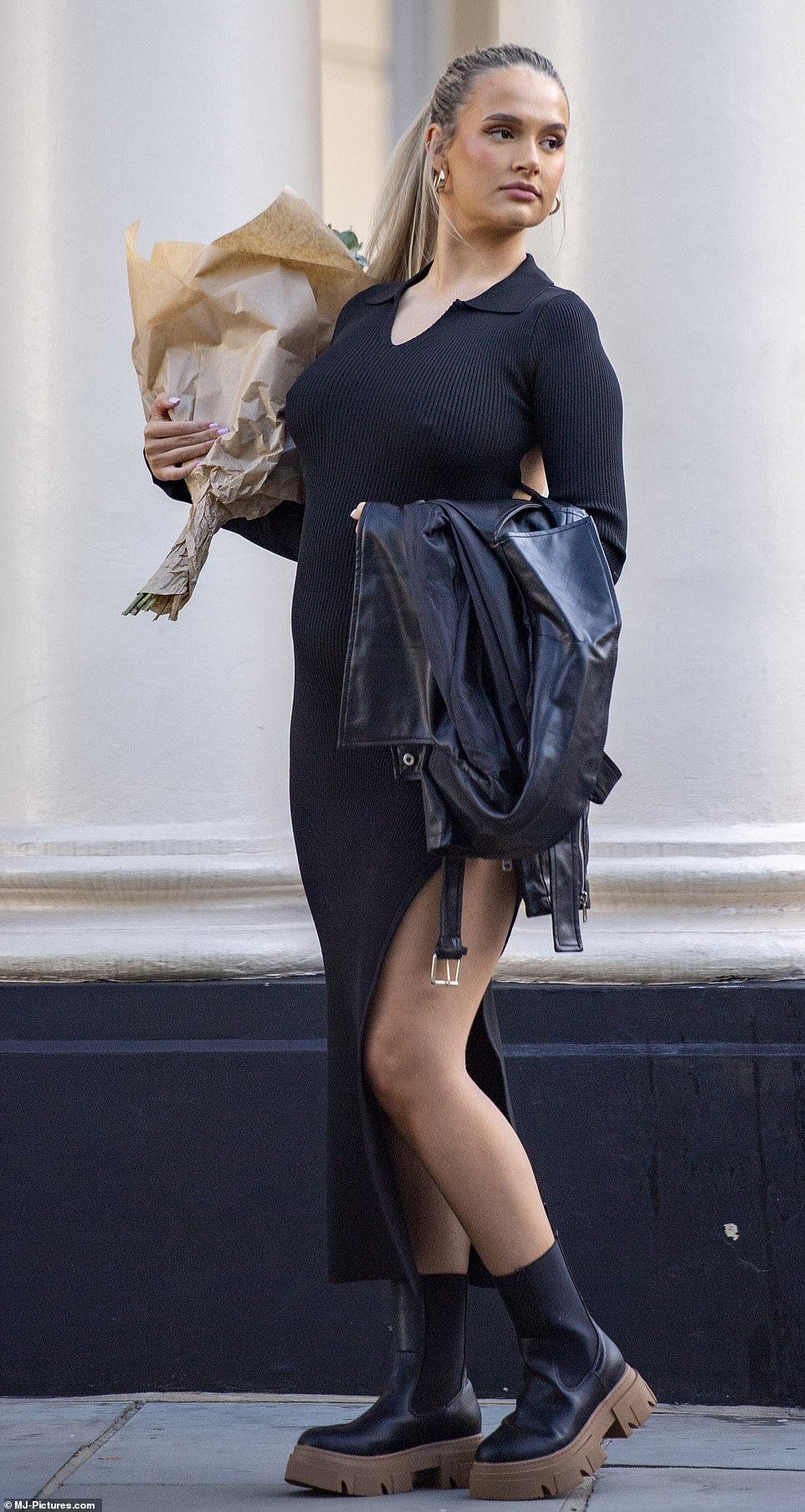 Beautiful: She clutched on to a bouquet of flowers and draped a leather jacket over her arm in one photo

Stunning: She looked incredible in the casual yet polished workout gear

Relaxing: She was joined by her iconic cuddly toy Ellie-Belly as she was transported around the capital

‘These months and weeks go so quickly and I’m announcing so soon, at the start of this video I was like “Oh I wonder if I’ll be able to get to five months” and now I’m heading on six months.’

The Love Island star, who announced the pregnancy news just over a week ago, explained in the pre-recorded vlog that when she announces the news she will have three months left.

And according to the vlog’s timeline, this would suggest Molly-Mae and Tommy will be welcoming their new arrival at the end of December/beginning of January. 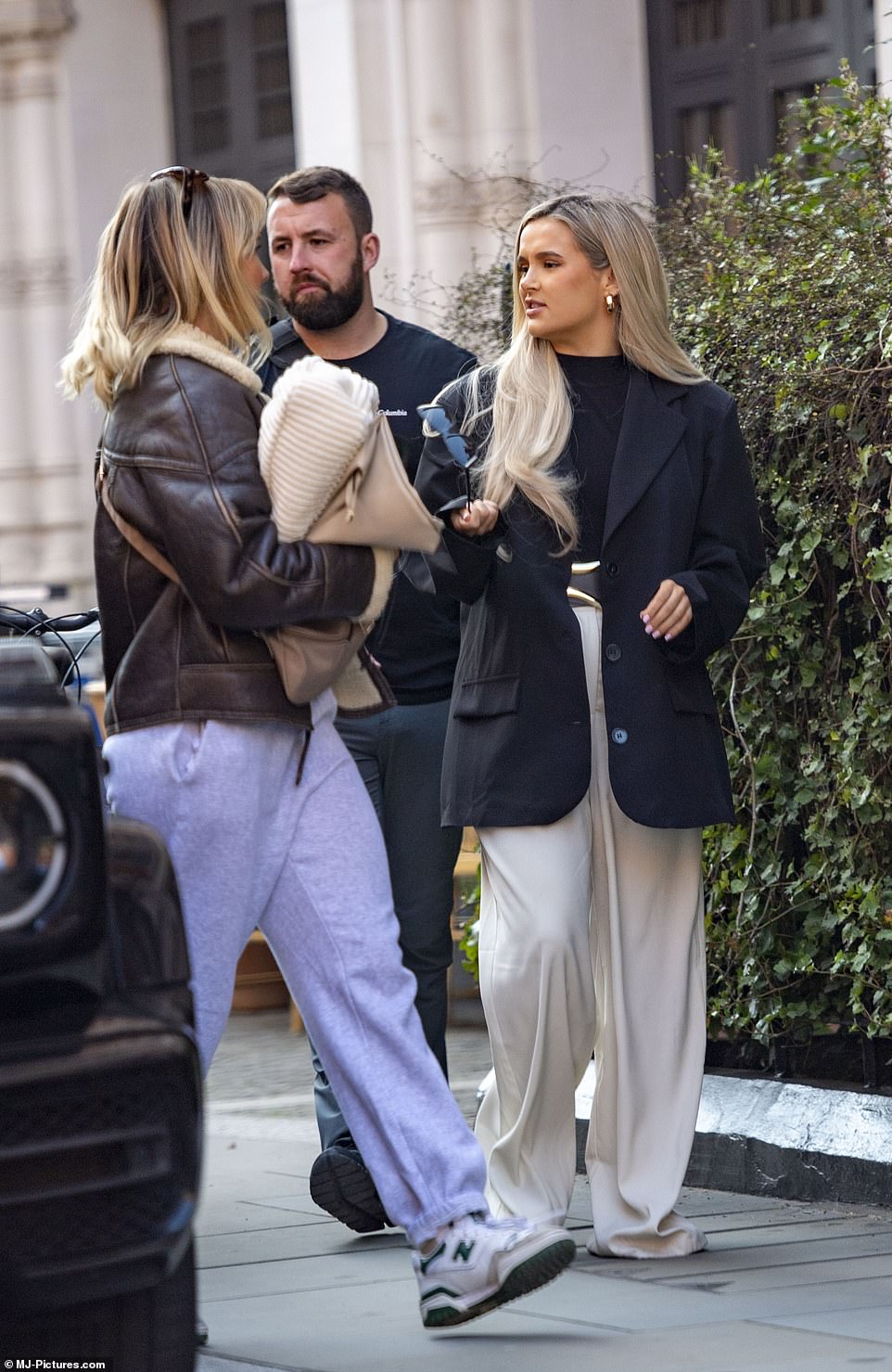 Pretty: Her hair was worn in her signature soft loose curls during one point of the day 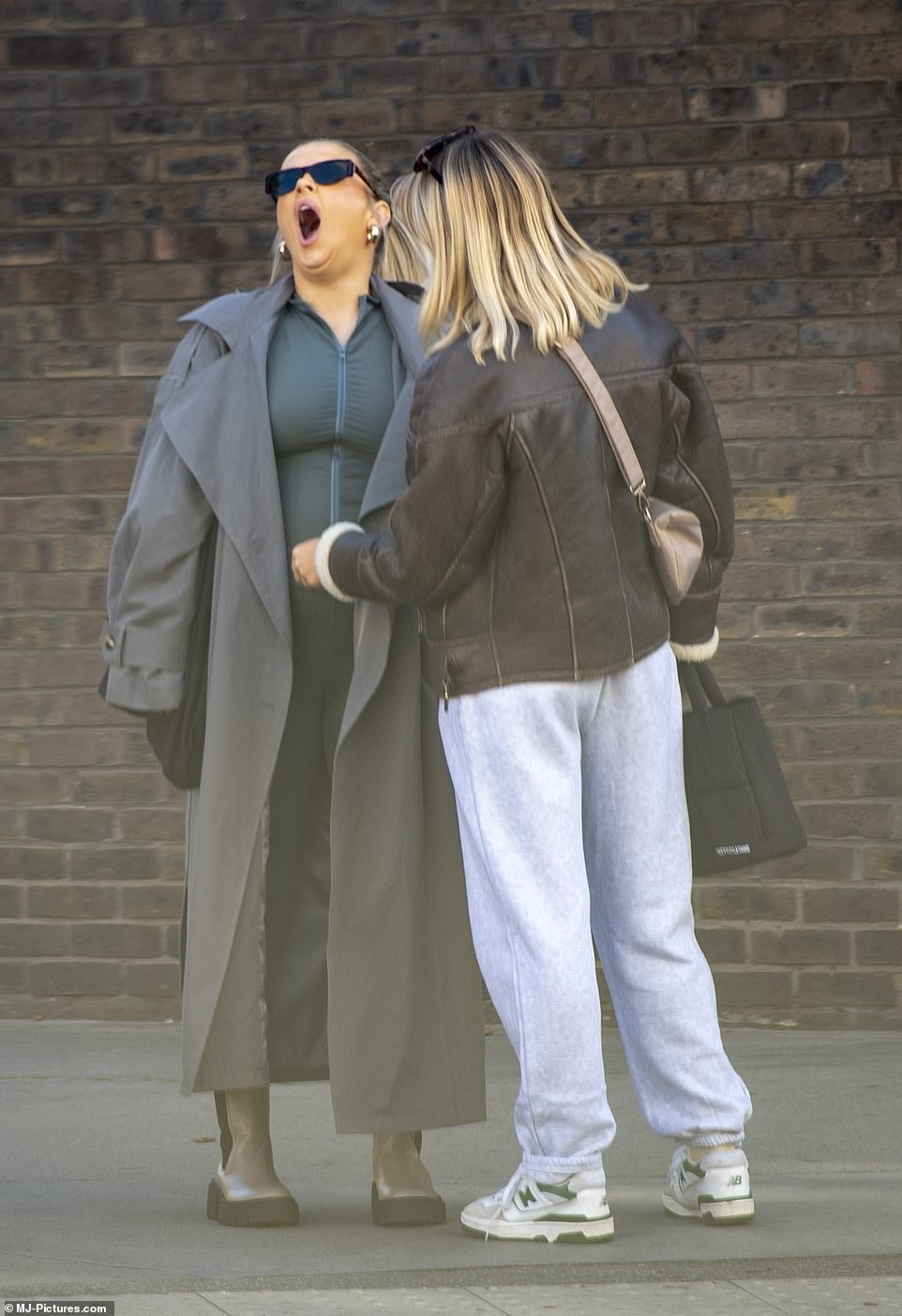 Long day: The expectant mother looked exhausted by the end of the photoshoot