Pride Of Britain 2021: ‘On a night where we celebrate heroes, I’m out with mine’ Holly Willoughby brings her mother to the celebratory evening

Holly Willoughby was accompanied by her mother Lynne at the Pride Of Britain Awards on Saturday night.

In a heartfelt Instagram post, the presenter, 40, wrote: ‘On a night where we celebrate heroes… I’m out with mine… [sic] #prideofbritain’, alongside a beaming mother-and-daughter photo.

The lookalike women looked nothing short of sophisticated as they prepared to hit the red carpet. 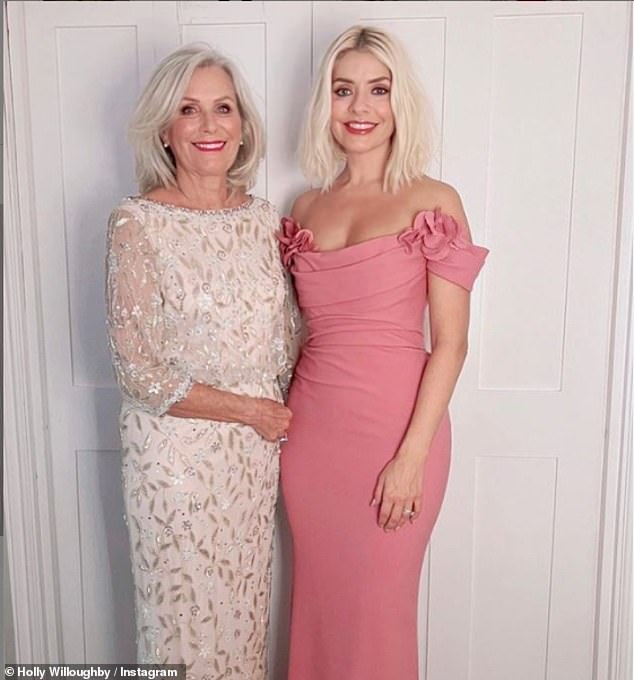 Lookalike: Holly Willoughby was accompanied by her mother Lynne at the Pride Of Britain Awards on Saturday night

The glamorous number skimmed her curves perfectly as she made her way into the event.

Meanwhile Lynne glowed in a stylish white dress which consisted of sheer sleeves and sparkling detail. 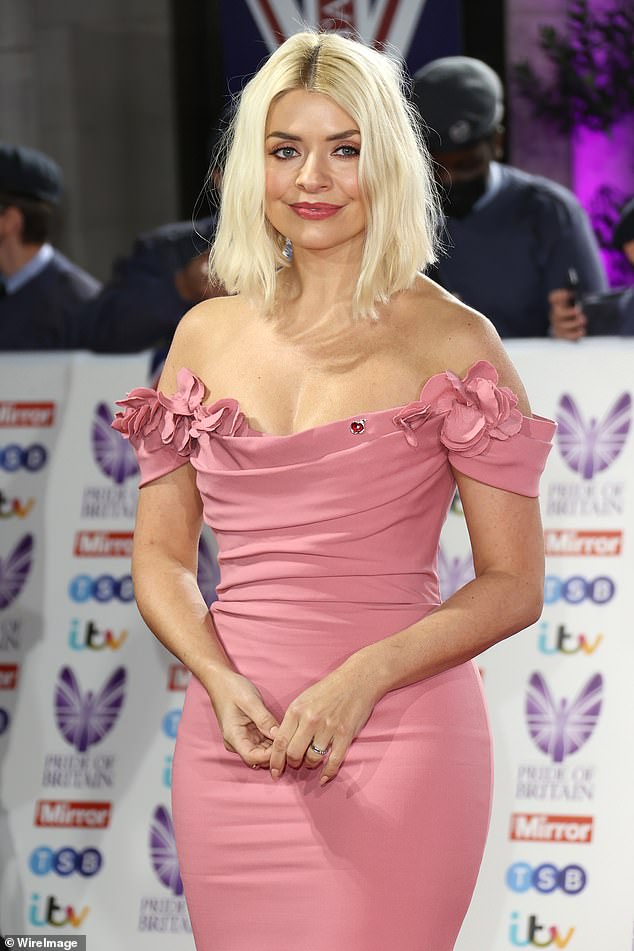 The This Morning star was glowing as she wore a perfectly applied layer of make up complete with dark pink lip colour, matching eye shadow and layers of blush swept across her cheeks.

Her blonde bob was styled in in a middle parting and fell just above her collarbone elegantly.

She elevated her height with white strappy sandals as the train of her dress trailed behind her.

Holly later posed with her mum Lynne who looked stunning in a long white flowery gown which had elegant 3/4 length sleeves. 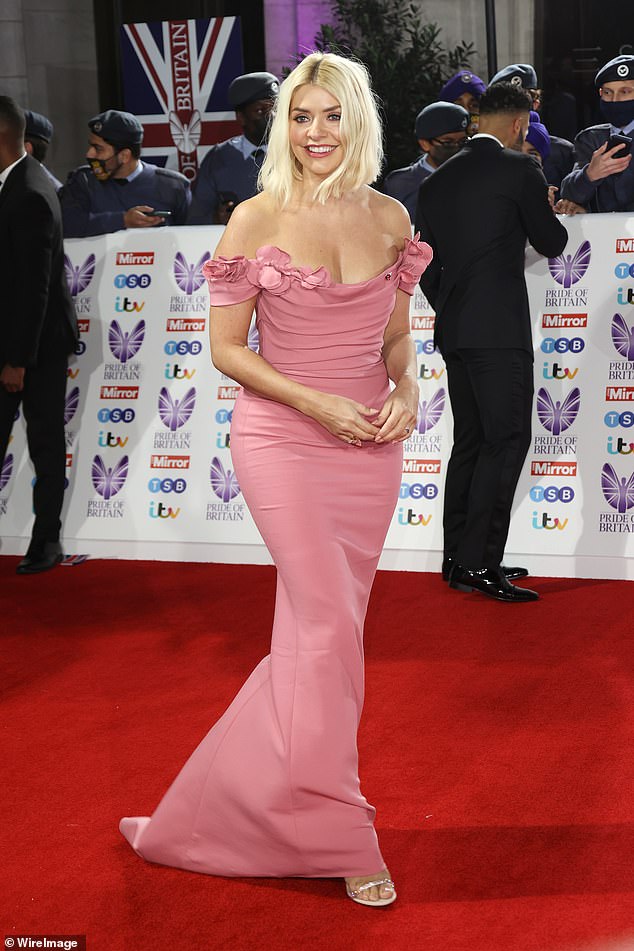 The Daily Mirror Pride of Britain Awards returns to screens on Thursday 4th November, hosting a star-studded audience for the first time since 2019 due to the ongoing coronavirus pandemic.

Host Carol Vorderman, 60, will once again take the helm, but this year, for the first time in the show’s 22-year history, she’ll be joined by Diversity star Ashley Banjo, 33, who was recently revealed as her new co-host.

Upon the announcement earlier this month, Ashley said: ‘I feel like I’ve been a part of Pride of Britain for a few years now but the chance to co-host it next to Carol, who is a complete legend and a pro, is amazing. 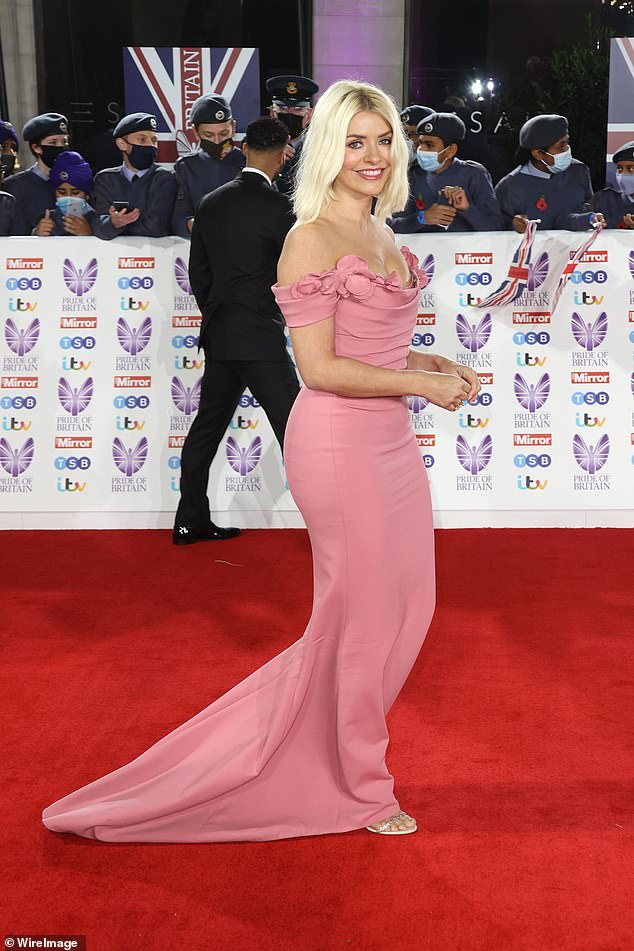 Stunning: The glamorous number skimmed her curves perfectly as she made her way into the event

‘It’s such a special show and a hugely emotional and inspiring night.’

While Carol said of Ashley: ‘Ashley is a wonderful person and I’m delighted that he’s joining me because he has been involved for a few years now and it just feels right.

‘The Pride of Britain Awards are an incredibly special evening and show to be a part of.’

Pride of Britain sees a night of ‘extraordinary stories of bravery, selflessness and phenomenal fundraising feats’ as well as a plethora of astounding surprises, laugh out loud situations and emotional moments as the nation comes together to honour the achievements of truly inspirational people.

Among the winners are quadruple amputee Harmonie-Rose Allen who wins the Child of Courage Award for inspiring the nation with her courage and unbreakable spirit.

While the Lifetime Achievement Award goes to campaigner Rosemary Cox, who set up the first Organ Donor Register in the UK, helping save thousands of lives. 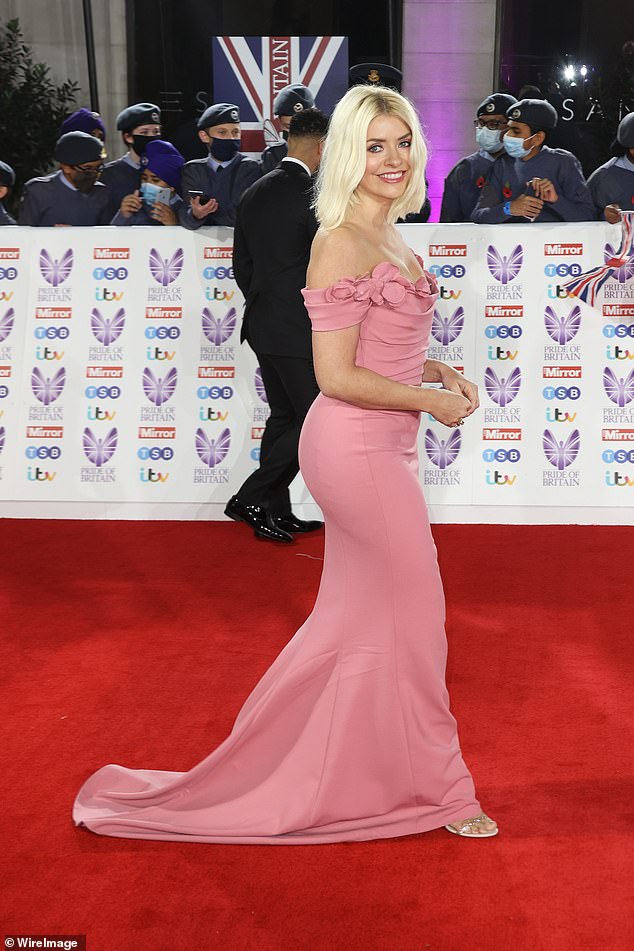 Glam: The This Morning star was glowing as she wore a perfectly applied layer of make up complete with dark pink lip colour, matching eye shadow and layers of blush swept across her cheeks

Campaigning sisters Amy and Ella Meek, 18 and 16, have been named Pride of Britain’s first ever Environmental Champions for setting up a charity to help fight the global scourge of plastic pollution.

Meanwhile, this year’s Special Recognition Award goes to Gee Walker, who forgave her son’s killers and devoted her life to promoting racial harmony in his memory.

Speaking about the ceremony, Carol said: ‘My favourite part of the Awards are the winners and how happy they are that they’re being celebrated.

‘These incredible people make you want to be a better person. And even though everyone says how much it makes them cry, it is a celebration too of all the truly extraordinary things they have done.’ 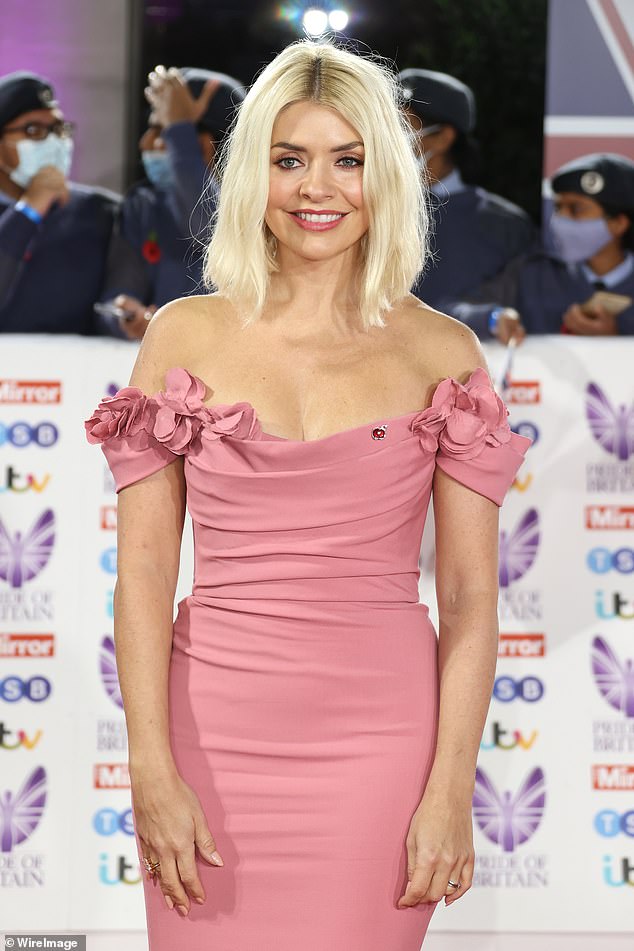 Effortlessly chic: Her blonde bob was styled in in a middle parting and fell just above her collarbone elegantly

Ashley Banjo says: ‘I have so much respect and admiration for all of the winners’ and I can’t wait to meet them, see the look on their faces as they are surprised and celebrated and to experience this really special moment with them.’

While Debbie Crosbie, Chief Executive Officer of award partner TSB adds:  ‘I have been bowled over by the bravery, courage and determination of all the winners.

‘Helping people in our local communities is at the heart of what we do at TSB – that’s why we are especially proud to sponsor the TSB Community Hero Award. It is truly humbling to see the extraordinary things people have done to make a difference and support those most in need in their communities.’

Nominated by the public, the winners are from all walks of life, of all ages, and from all over the country.

Since the first ceremony in 1999, royalty, prime ministers, and hundreds of leading figures from showbusiness, sport, politics and the arts have all taken part.

The awards attract an audience of around five million viewers every year in a primetime slot on ITV – making it the highest rated awards show of its kind on British television.

Due to COVID-19 restrictions, 2020’s ceremony featured prerecorded segments of recipients receiving their awards at home, while a host of big names headed to The Royal Hospital Chelsea to film links ahead of the show.

As the awards aired on ITV, landmarks across London, including the London Eye, BT Tower and County Hall, turned red, white and blue in celebration of the winners.

Marcus Rashford and the late Captain Sir Tom Moore were among those honoured in the ceremony, which awarded the remarkable achievements of Brits who have selflessly contributed the the nation and the world.

The Daily Mirror Pride of Britain Awards, in partnership with TSB, will be broadcast on ITV on 4th November at 8pm. 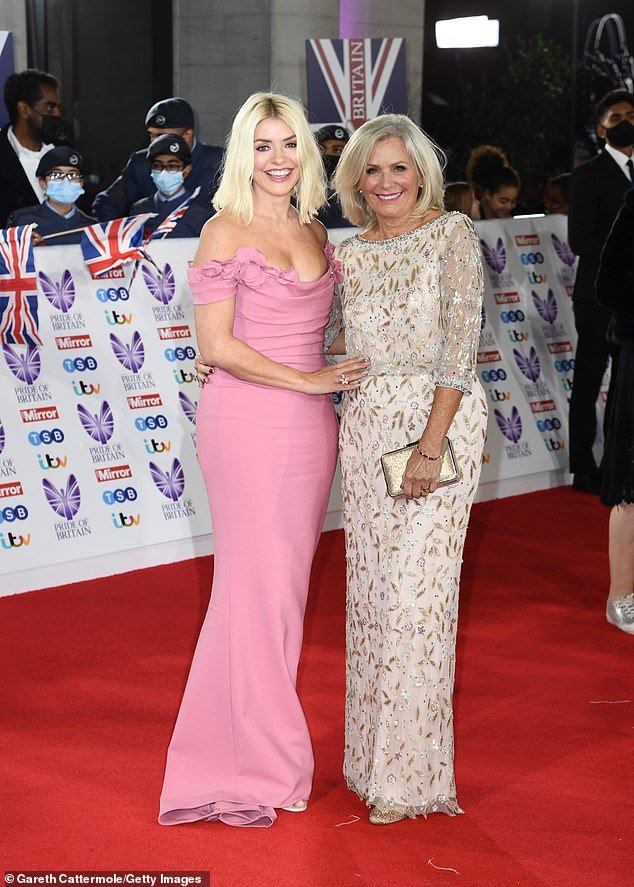 Like mother like daughter: Holly later posed with her mum Lynne who looked stunning in a long white flowery gown which had elegant 3/4 length sleeves

PRIDE OF BRITAIN AWARDS 2021: THE WINNERS