‘He’s livid he can’t go back in!’ Richard Madeley’s daughter Chloe reveals her father’s annoyance at I’m A Celeb’s decision to force him to quit after hospital visit broke ‘Covid bubble’

Richard Madeley’s daughter Chloe has revealed that her father is ‘livid’ he can’t go back into the I’m A Celebrity camp after his shock hospital dash on Thursday.

In a major blow to the show as one of their top signings, the broadcaster, 65, was taken ill hours after participating in a gruelling trial and now can’t return as he has broken the show’s ‘Covid bubble’.

Presenter Chloe, 34, took to Instagram to say she had spoken to him and that while he was annoyed he couldn’t return, he was ‘absolutely fine’, before gushing she was ‘so proud’ of him. 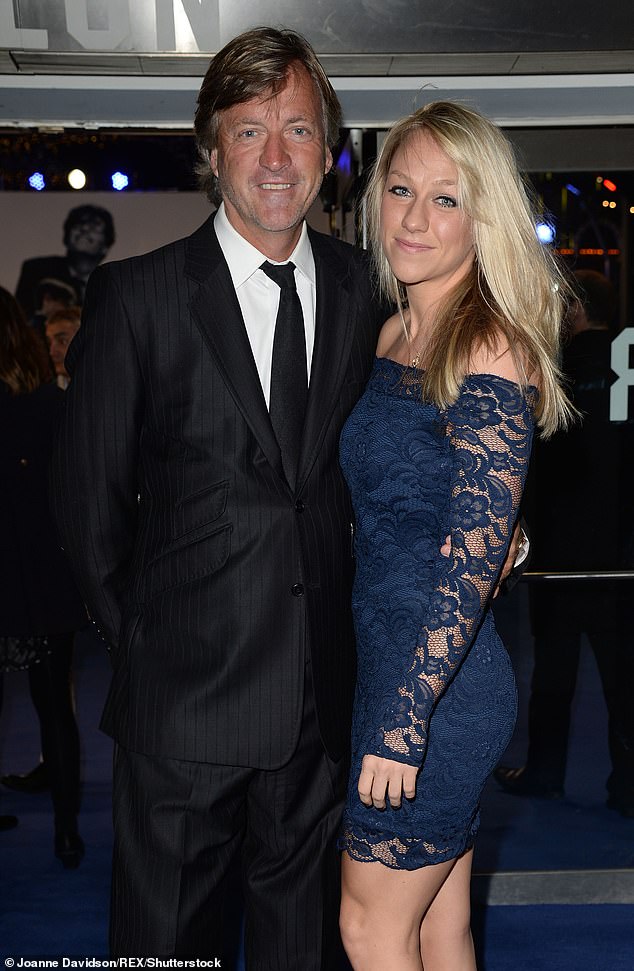 Family: Richard Madeley’s daughter Chloe has revealed that her father is ‘livid’ he can’t go back into the I’m A Celebrity camp after his shock hospital dash on Thursday (pictured together)

She wrote: ‘Thanks for all your lovely messages, dad’s absolutely fine, we’ve been speaking to him all day.

‘Ultimately, he’s just livid he can’t go back into camp because of Covid restrictions.’

She continued: ‘He did himself proud though. He worked hard and was his calm, collected, kind and funny self. We are so proud!’ 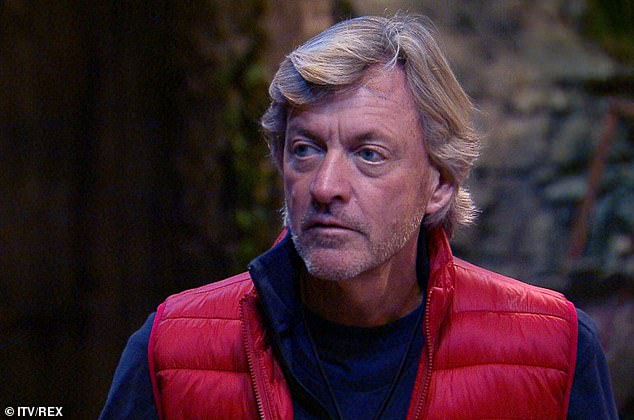 Shame: In a major blow to the show as one of their top signings, the broadcaster, 65, was taken ill hours after participating in a gruelling trial and now can’t return as he has broken the show’s ‘Covid bubble’

Richard has been forced to leave the show after being rushed to hospital with an unknown medical condition.

In a statement Richard, who was believed to be treated at Glan Clwyd Hospital in Rhyl, reassured fans that he’s ‘fine’ after his health scare, but confirmed he had to quit the series after breaking the show’s ‘Covid bubble.’

Richard said: ‘Hello all! Richard here – firstly just to say that I’m absolutely FINE. I started to feel briefly unwell in the small hours of the morning and was taken to hospital as a precaution. 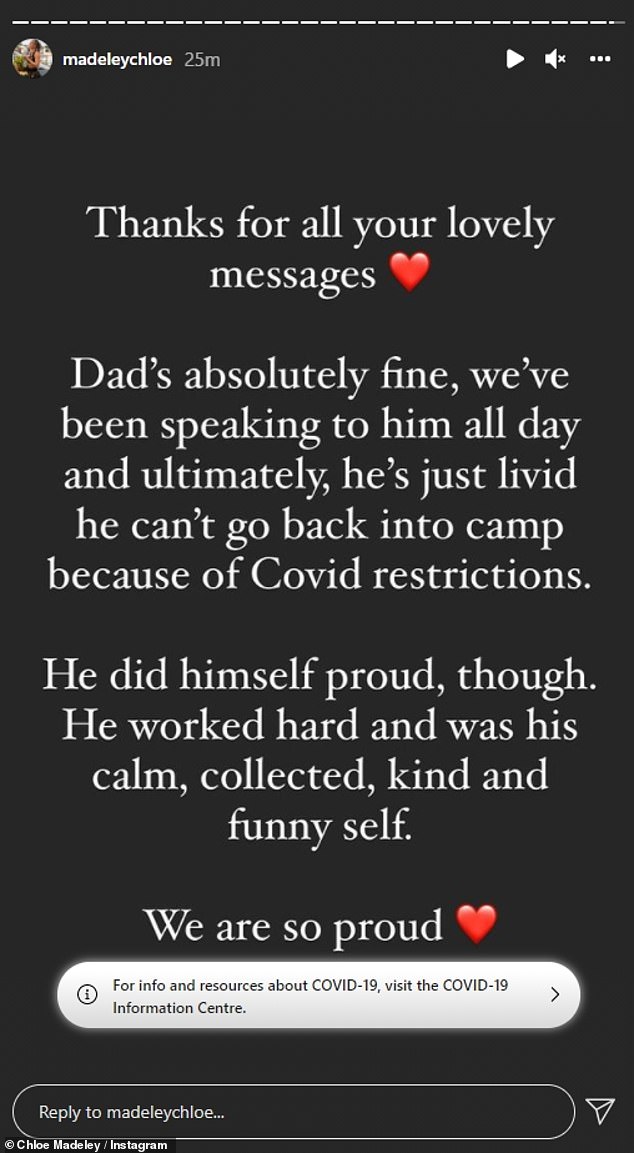 Statement: Presenter Chloe, 34, took to Instagram to say she had spoken to him and that while he was annoyed he couldn’t return, he was ‘absolutely fine’, before gushing she was ‘so proud’ of him

‘By leaving the camp, I had consequently broken the Covid ‘bubble’ and as such I’ve had to leave the castle and all the wonderful celebs that remain in the camp.

‘Obviously I’m gutted to be leaving so soon but the safety of all the campmates is the number one priority. I’m incredibly excited to watch their journey continue…even more so at the prospect of being somewhere a little warmer than Gwrych Castle…

‘Thank you to everyone who supported me on my brief but completely unforgettable adventure – I’ve made some great friends and honestly had the time of my life.’

An I’m A Celebrity spokesperson added: ‘Our strict Covid protocols means Richard has sadly had to leave the show as he is no longer in the bubble the celebrities form when entering the castle.

‘Unforgettable’: Richard revealed he’s been forced to leave the show after being rushed to hospital and breaking the show’s ‘Covid bubble’

‘He has been a truly brilliant camp mate and we thank him for being part of this series.’

A source also told MailOnline: ‘Richard is devastated. He was doing his best in the trials and embracing every part of life in camp, this isn’t the way he saw his I’m A Celeb journey ending.

‘Richard going back to camp would pose as too much of a risk to the other contestants, who have isolated and formed a bubble to protect themselves from a possible Covid-19 outbreak on set.

‘Everyone on the show will miss him – he’s been a huge part of camp and it’s so disappointing he won’t be able to return.’ 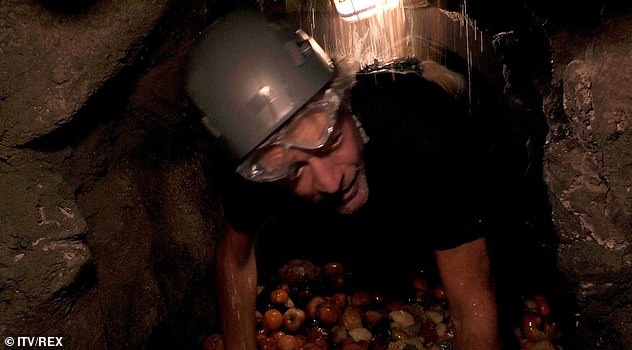 Gross! The broadcaster, who was paid an estimated £200,000 to star in this year’s competition, was taken ill hours after participating in a gruelling trial

It had been thought that musician DJ Locksmith had been enlisted as a standby contestant, but no one is set to replace Richard in the castle.

It’s also thought that Richard will still be paid his full fee for his time on the show, despite spending just four days in the castle.

An ITV spokesperson previously revealed that Richard had been hospitalised in the early hours of Thursday morning after falling ill overnight.

They told MailOnline: ‘Richard was unwell in the early hours and was immediately seen by our on-site medical team.’

They added: ‘He’s since been taken to hospital as a precaution, the health and safety of our campmates is our priority.’ 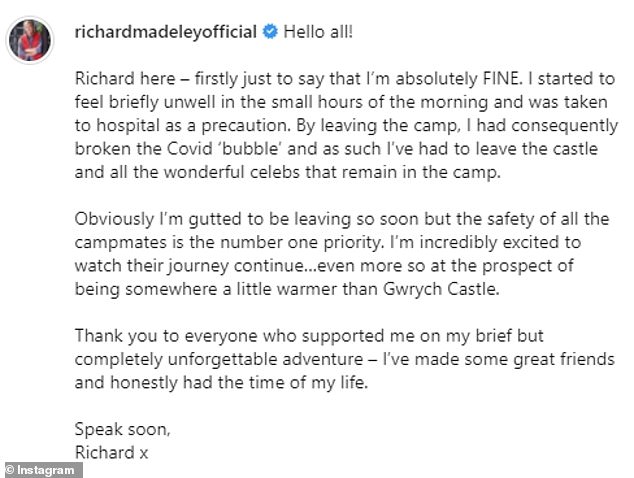 ‘Gutted’: In a statement Richard, who was believed to be at Glan Clwyd Hospital in Rhyl, reassured fans that he’s ‘fine’ after his health scare

A Welsh Ambulance Service spokesperson said: ‘We were called at 05.43am this morning, Thursday 25 November 2021, to reports of a medical emergency at Gwrych Castle in Abergele, Conwy.

‘We sent a paramedic in a rapid response car and an emergency ambulance to the scene, and one patient was taken to hospital.’

He was forced to use his mouth to try and untie some of the knots to retrieve stars that were hanging from a rope.

As fish guts and offal fell on him, the presenter struggled to unknot the string that had the stars on and exasperated said: ‘Holy Moly’, before the klaxon sounded again, marking the end of the task.

Speaking about the knot he said: ‘Who tied these knots? It’s wet and it’s tight. This one isn’t at tight’, prompting laughs from Ant and Dec.

‘Such a disappointment,’ Richard said: ‘We’ll have something to eat tonight. I was really hoping to do better than that.’

A disheartened Richard returned to camp and told them how difficult he found the trial, and the campmates graciously accepted that he had only managed to get four stars, leading to measly dinner of squirrel. 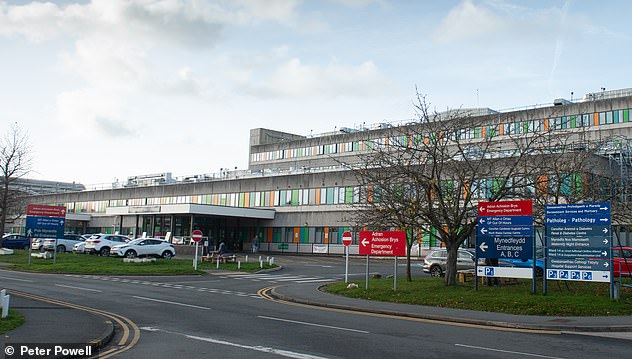 Worry: Richard was believed to be at Glan Clwyd Hospital after falling ill overnight

At the end of the show, which was broadcast live, Richard was seen alongside the rest of the camp being told by Ant and Dec that all 10 of them would be heading to the trial area for the latest challenge.

It was then revealed that soap stars Simon Gregson, 47, and Adam Woodyatt are the two new campmates will be taking part in the Castle Scare Fair Trial on Thursday night.

Ahead of his arrival in the castle, where celebrities typically live on basic meals of rice and beans, Richard admitted he’d done no preparation.

He told MailOnline: ‘Some people say cut down on food, but others say because you’re going to lose weight, so put it on [before you go in]. I’ve done neither. 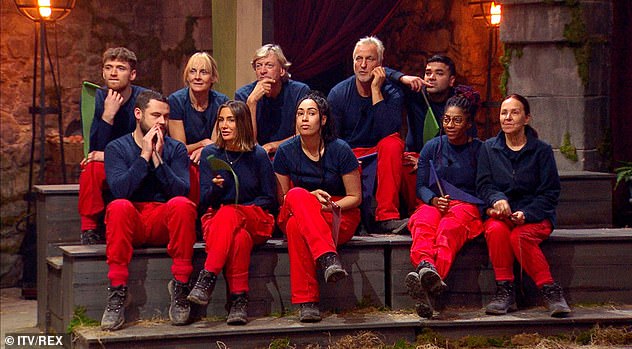 Still there: In first look images from Thursday’s show, which was partially filmed on Wednesday night, Richard could be seen alongside his campmates before being hospitalised

‘I’m not a big eater I’m a grazer, I don’t clear my plate. I’m most worried about how I’m gonna cope with boredom. That’s why I want people to vote for me to do the trials.’

Discussing which trials he’s most fearful of, Richard confessed: ‘I don’t have any particular phobias, but the only thing I’m dreading – I’m not that comfortable with heights.’

Prior to entering the castle, Richard spoke of his willingness to do the infamous Trials.

He added: ‘I really hope I do get voted for the trials. The thing about this programme is you mustn’t go in to it if you take yourself remotely seriously. I don’t and I am thoroughly looking forward to being covered in god knows what!’

Before Richard’s appearance on the show was confirmed, it was reported he’d been paid £200,00 by ITV bosses, after being targeted by producers multiple times.

A source told The Sun: ‘Richard’s been asked year after year but the timing has never been right. But now, finally, he’s said ”Yes”.

‘He’s a favourite with ITV execs. He’s brilliant off and on screen so it seemed as good a time as any to throw caution to the wind and eat animal bits.

‘He’s a fantastic coup and a nailed-on fan favourite. Once you wind him up, off he goes — he will make for castle gold.’

Candid: Richard is best known for his lengthy stint hosting This Morning alongside his wife Judy Finnigan, and in recent months has done regular stints on Good Morning Britain