Rihanna sizzles in a bodysuit for Valentine's Day collection

Rihanna had her curves on full display on Monday when she modeled a stunning burgundy bodysuit for her Savage X Fenty brand.

The 33-year-old singer and businesswoman left little to the imagination in the plunging lingerie, which she complemented with red horizontal stripes running through her pin-straight hair.

The hitmaker was promoting her Fenty Beauty Gloss Bomb Heat lip luminizer and held it to her mouth as if the bottle was a cigarette. 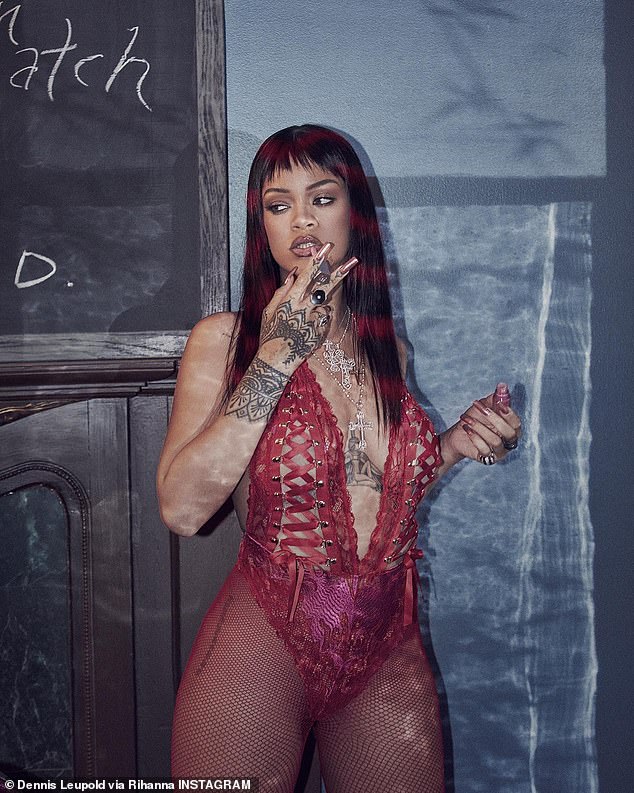 Red hot: Rihanna, 33, had her curves on full display on Monday when she modeled a stunning burgundy bodysuit for her Savage X Fenty brand on Instagram

Rihanna was photographed at night in a moody gray–blue room bathed in shadows.

Her plunging dark red bodysuit reached down to her midriff, highlighting her bust and tattoos.

The Work singer’s lingerie included eye-catching criss-cross stitching running up her front, and she paired the suit with red fishnet stockings.

The 5ft8in beauty added to her stature with a set of burgundy open-toe stilettos, and she accessorized with several large rings on her fingers. 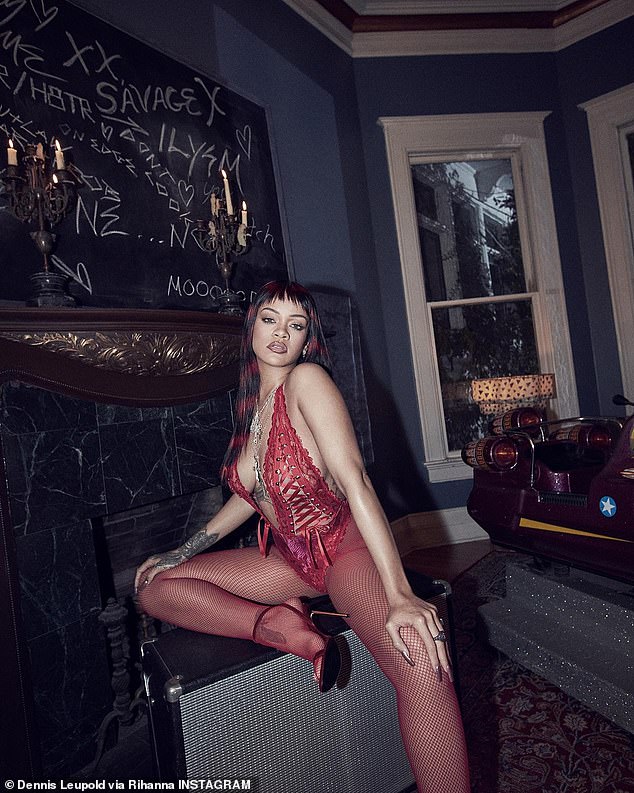 Revealing: Her plunging dark red bodysuit reached down to her midriff, and she paired it with red fishnet stockings and open-toe stilettos

In one snap, she took a load off her feet and rested one leg on a large amplifier.

Another spooky shot showed her gazing blank-faced to the side while standing next to a window with flood-light lit tree in the yard outside.

‘Valentine’s Day is for me…. but you can watch,’ Rihanna teased in her Instagram caption.

Over on her Savage X Fenty page, she included a closeup featuring her Beauty Gloss Bomb Heat bottle while emphasizing her lustrous, plump lips.

The account described the luminizer and plumper as the ‘FIRST EVER’ collaboration between Rihanna’s lingerie brand and her Fenty Beauty company. 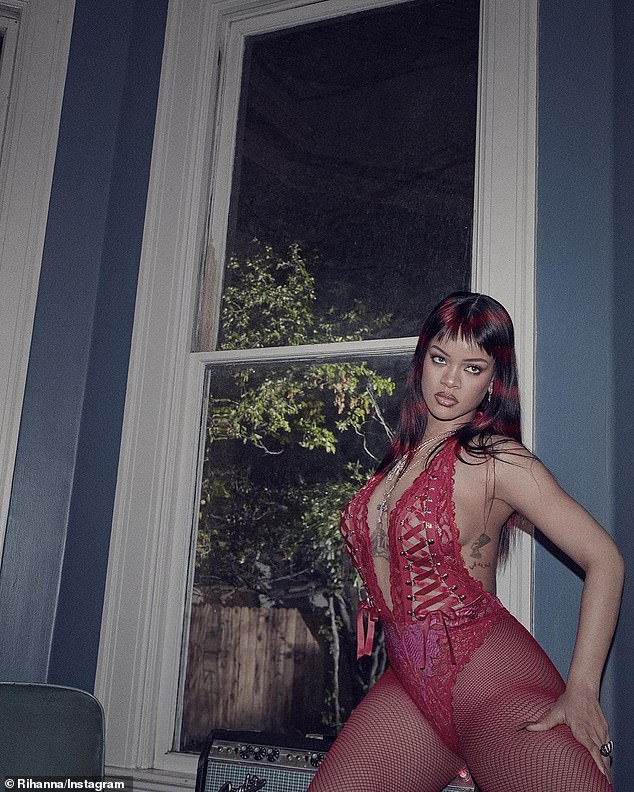 Splash of color: The Work singer complemented her lingerie with horizontal red stripes running through her pin-straight raven locks 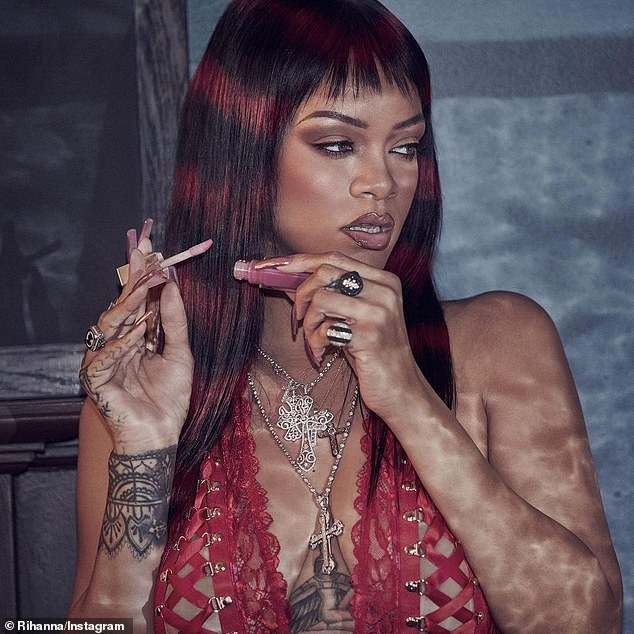 Playful: ‘Valentine’s Day is for me…. but you can watch,’ Rihanna teased in her Instagram caption while promoting her her Beauty Gloss Bomb Heat lip luminizer

Rihanna launched her popular Savage X Fenty brand in 2018 in an effort to providing more inclusive sizing and colors.

So far, the brand has increased in popularity with online-only sales, but the songstress is planning to increase the brand’s profile by opening five new brick-and-mortar stores in 2022.

Earlier this month, Rihanna shared a photo of a colorfully lit store.

‘Can’t believe it’s actually that time, and I can’t wait for you to have this experience irl,’ she wrote. 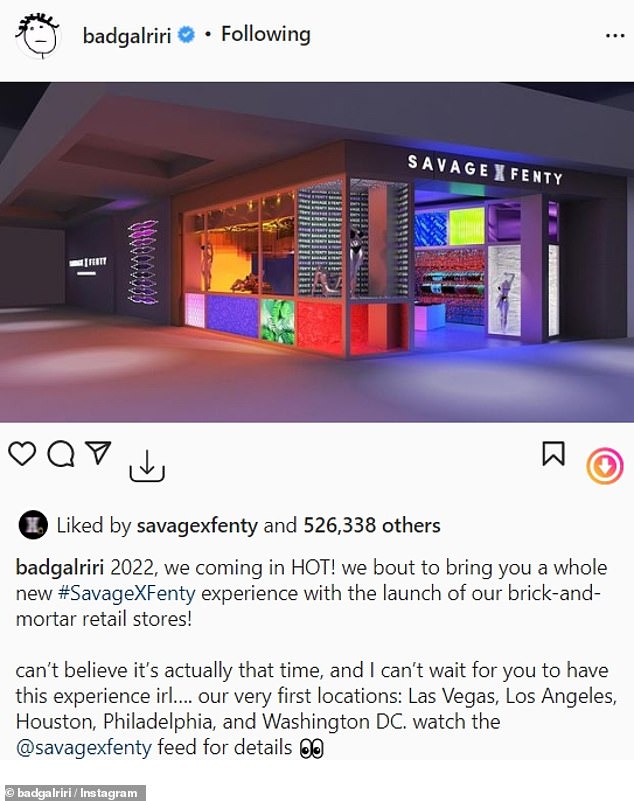 Real world locations: Earlier in January, the hitmaker announced her plans to open five brick-and-mortar stores in 2022 after having previously been online only

When Rihanna isn’t busy managing her fashion and cosmetics empire, she’s lately been spending time on both the West and East Coast with her boyfriend ASAP Rocky.

The two were spotted on several occasions earlier in January around Los Angeles, but on Sunday night they were seen braving New York City’s chillier climates.

The couple have been friends for years, going back to the 2010s, but it wasn’t until 2020 that their romance began to heat up. 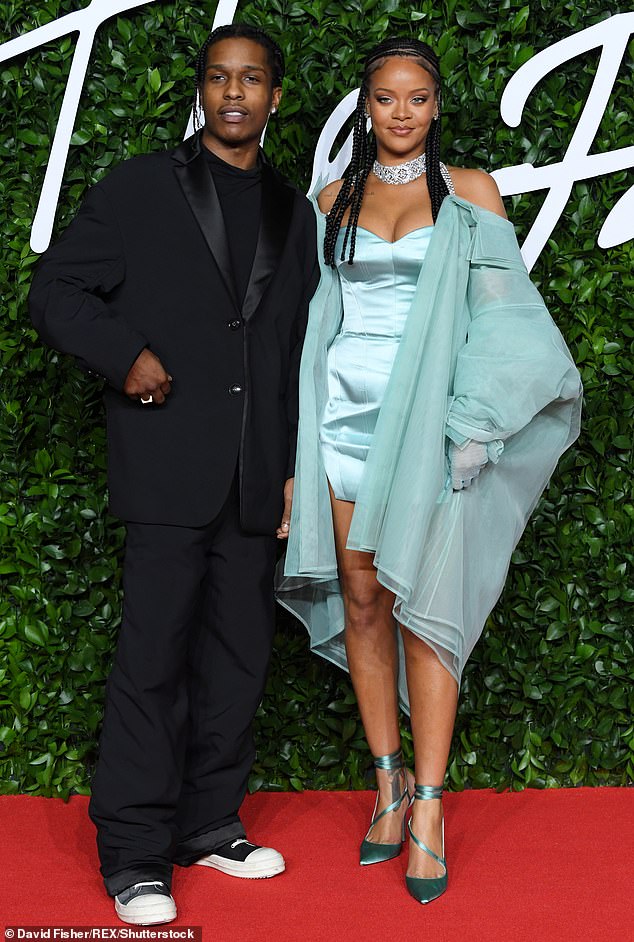 Inseparable: When she isn’t modeling for her successful lingerie brand, Rihanna has been spending some quality time with her beau ASAP Rocky, both in Los Angeles and more recently in New York; seen in 2019 in London