‘She was such a hit in the first series’: Rita Ora ‘has been paid a whopping £1M to return for latest season of The Masked Singer’

Rita Ora has reportedly been paid an eye-watering £1million to appear on the second series of The Masked Singer, after proving to be a hit with fans in the first.

The 30-year-old singer, who returned to screens on the ITV show on Boxing Day, is said to be earning double the pay packet of new recruit Mo Gilligan, 32.

A source told The Mirror: ‘Rita received a whopping £1million-per-series deal for her role as a returning judge. 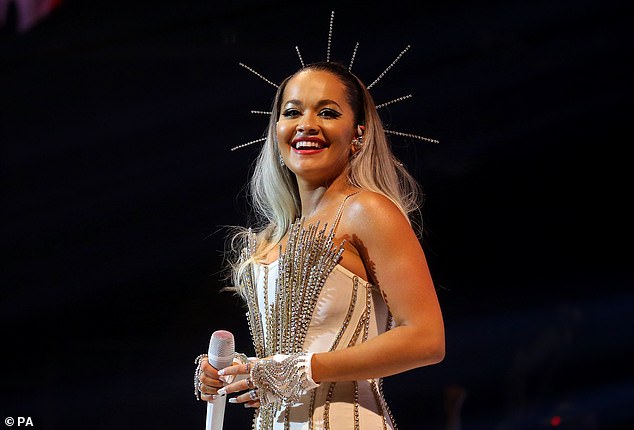 Big payday: Rita Ora has reportedly been paid an eye-watering £1million to appear on the second series of The Masked Singer, after proving to be a hit with fans in the first

‘They were really keen to secure her return as she had been such a big hit in the first series. But they also really wanted Mo, too. He is a prolific talent with a big following.’

When contacted by MailOnline, a representative for Rita Ora declined to comment.

Davina McCall and Jonathan Ross have returned to their judges’ seats alongside Rita and BAFTA-winning comedian Mo, who has replaced Hangover star Ken Jeong.

Reports of Rita’s windfall come after it was claimed she had fled the UK for the final weeks of 2020 following her lockdown rule flouting 30th birthday party. 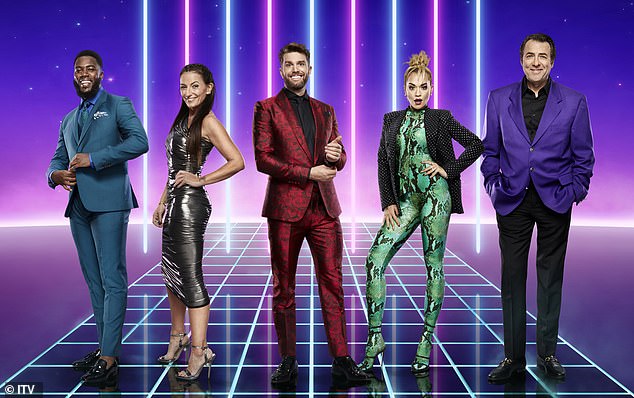 Making a comeback: She is pictured with fellow judges (L-R) Mo Gilligan, Davina McCall, and Jonathan Ross, with show host Joel Dommett in the centre

Speaking ahead of the launch, Rita said it would be even more tricky to guess the stars behind the ‘extravagant’ costumes now as the clues are ‘ten times harder’.

When asked if she thinks The Masked Singer has gone up a level this year, the star replied: ‘100 per cent! And it’s more difficult for me this year now with guessing.

‘I came in as the champion from last year, full of confidence and now I’m sort of second guessing everything because they’ve made all the clues ten times harder. I think on purpose so I don’t win. The sabotage is unbelievable!’

Rita also spoke about the impressive costumes, saying they’re ‘so extravagant’ and really help to keep all the panel guessing until the last moment. 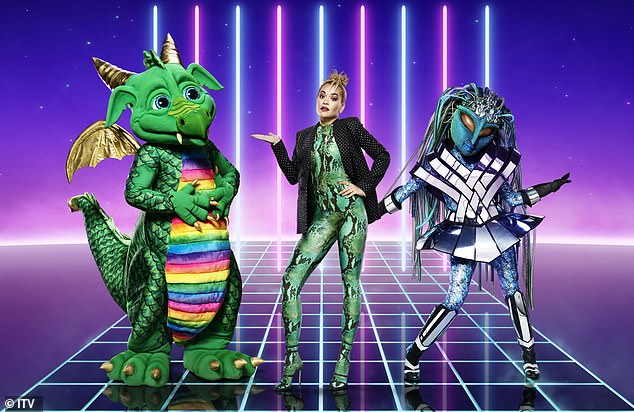 Exciting: The singer, 30, said this the clues for this year’s contestants are ’10 times harder’ and revealed that the stars’ have really committed to becoming their characters

She said: ‘The costumes are so extravagant. They’re really putting my tour wardrobe to shame! I love to dress up so I’m just mesmerised by how they’re making it all.

‘I want to steal them for my own tours! I’m looking and wondering how they made them and how they move in them. Logistically it’s impossible to figure out where they’re actual heads are. It’s wicked!’

The new line-up will be hoping to follow in the footsteps of the first series winner, Nicola Roberts, who performed as Queen Bee. 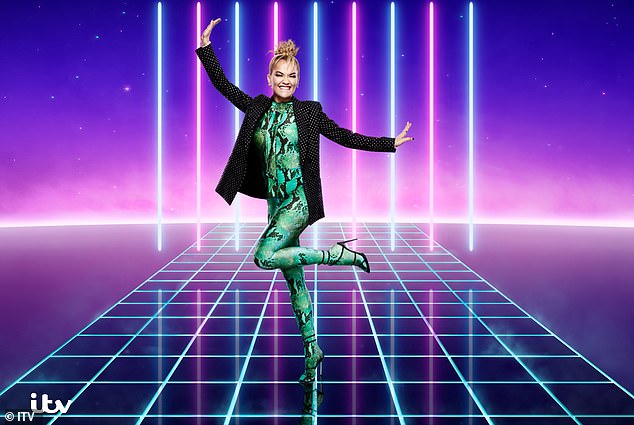 Bring it on: Rita also spoke about the impressive costumes, saying they’re ‘so extravagant’ and really help to keep all the panel guessing until the last moment

Rita’s appearance on TV comes after it was reported that she had allegedly fled the country for the end of 2020, after she was caught throwing a 30th birthday bash for herself during London’s second COVID-19 lockdown.

According to The Sun, the singer – who flouted strict rules by celebrating her birthday at an illegal gathering last month – has jetted to Bulgaria to film a new music video and will stay abroad for the rest of the year.

This will be the second time she has left the country in recent weeks, having also been caught flying privately to Egypt and not quarantining afterwards.

A source said: ‘Rita has beaten herself up about her mistakes but has thrown herself back into work to take her mind off things. 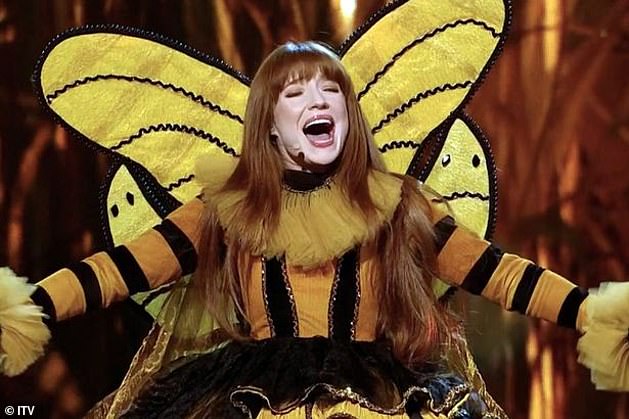 Champion: The winner of the inaugural British series was Nicola Roberts, formerly of Girls Aloud, who had performed as Queen Bee

‘She spent most of this year working on her music and is now hoping to return with new tracks in early 2021, with the video to one single being filmed at the moment in ­Bulgaria.

‘She doesn’t want to be in ­London right now so has booked a relaxing holiday over Christmas and New Year in the hope she can start afresh in January.

‘Taking some time out to reflect on everything that has happened is very important to her right now.’

MailOnline approached Rita Ora’s reps for comment at the time.

Rita was further humiliated shortly after news of the broken rules broke when an interview she did prior to her birthday was published. 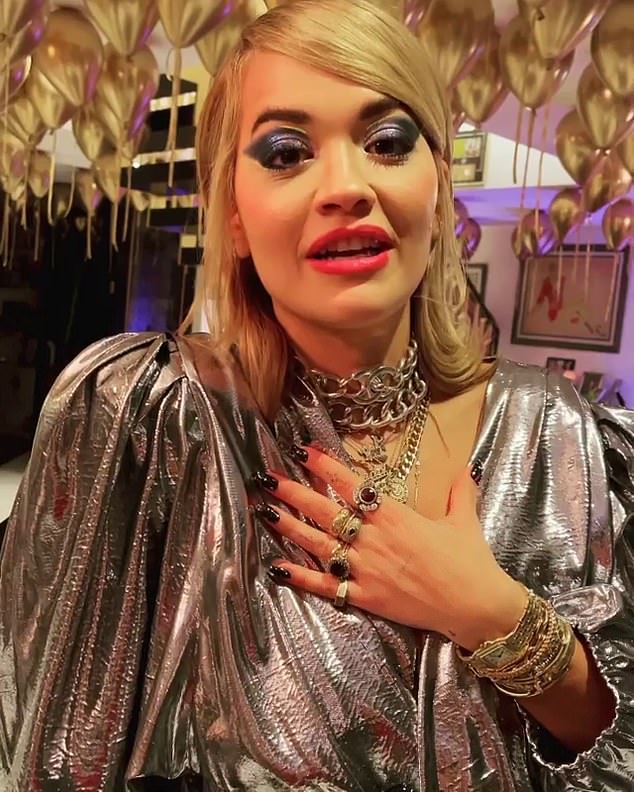 Oh dear: It comes after Rita allegedly fled the country for the remainder of 2020, after she was caught throwing a 30th birthday bash for herself during London’s second COVID-19 lockdown

She declared she was having a quiet 30th in an article published on December 6 by Sunday Times Magazine, claiming she was only celebrating with her parents due to lockdown.

The article included a string of quotes from the pop star about how she was ‘being patient like everyone’.

The chat took place in early November, in which she said of her lockdown experience: ‘I’m being patient – getting through it like everyone.’

She went on to divulge her apparent birthday plans, saying: ‘It’s going to literally be just my parents and me. I’m actually looking forward to it. To just hanging out with my parents. Is that weird?’

This leaves Rita with egg on her face for the third time, having been caught twice flouting the rules.

The Mail On Sunday revealed that prior to her birthday the singer flew by private jet to Cairo on November 21 to perform at the five-star W Hotel.

She returned the next day and under Government quarantine rules should have self-isolated for 14 days.

Instead of this, she threw a birthday party on November 28 at the exclusive Casa Cruz restaurant in Notting Hill, west London. 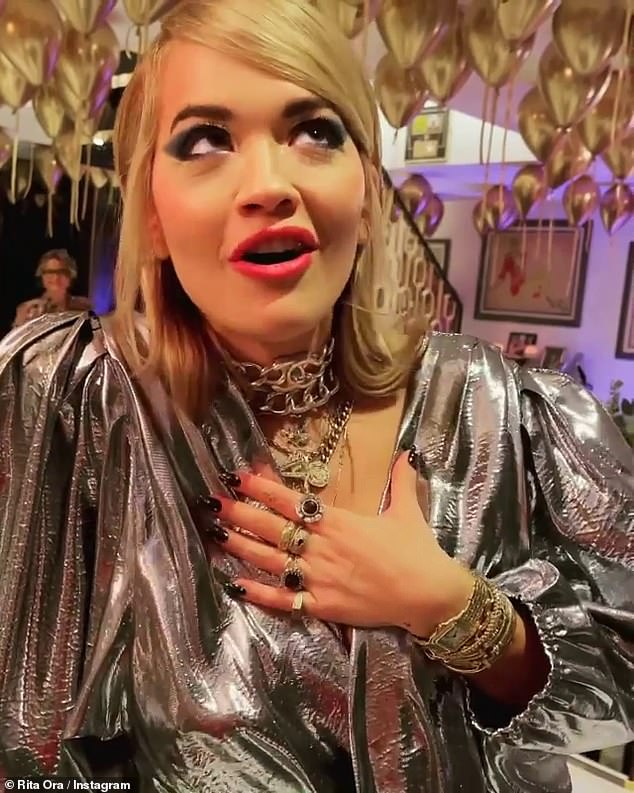 Apologies: The star has said sorry for breaching rules for her party and for jetting to Egypt and not isolating on her return (pictured on her birthday)

‘It was a spur of the moment decision made with the misguided view that we were coming out of lockdown and this would be OK… I’m deeply sorry for breaking the rules and in turn understand that this puts people at risk.

‘I feel particularly embarrassed knowing first-hand how hard people have worked to combat this terrible illness and being fully aware of the sacrifices that people and businesses have made to help keep us all safe. Even though this won’t make it right, I want to sincerely apologise.’

She paid the hefty £10k fine for breaching these protocols, having been reported to the police, who investigated the restaurant, which, to any passers-by, looked to be closed up.

She was then forced into another grovelling apology for breaching strict novel coronavirus rules, amid the latest embarrassment.

She said: ‘I recently flew to Egypt to perform at a corporate event for a private company, where my travel party followed protocol and presented negative Covid tests upon entry, as required by Egyptian authorities. 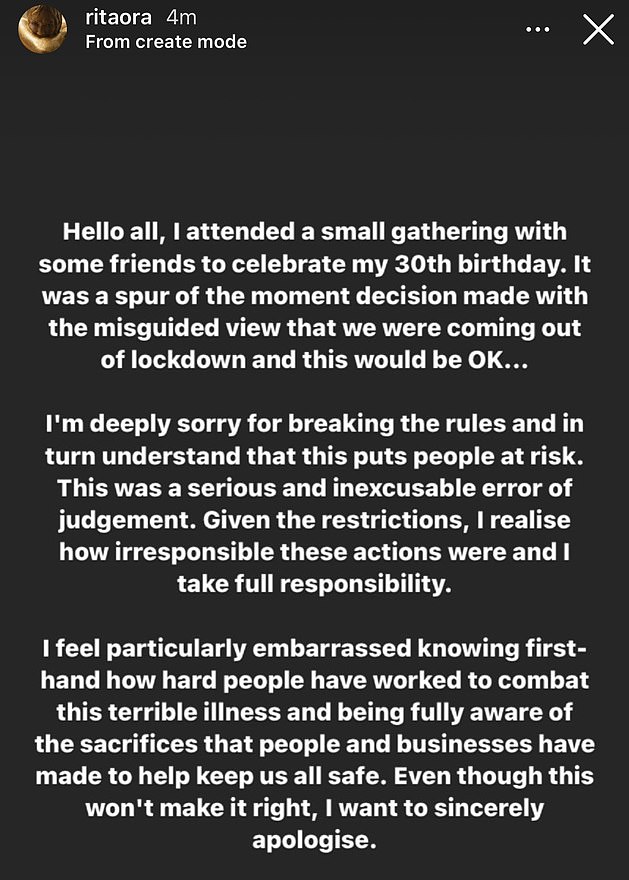 ‘While I realise the apologetic words of a pop star might not carry much weight, especially one who has broken the rules like I have, I do realise some might seek to follow my example.

‘My message to them is simple: please don’t. The guilt and shame I’ve carried this week for my mistake aren’t worth it. Instead, continue to listen to the Government advice and the voices of the heroes of the NHS and take the required precautions.’

‘In the meantime, I will be donating my fee from Egypt to charity. Be better than I have been and learn from my mistakes so you don’t have to learn the hard way yourselves.’ 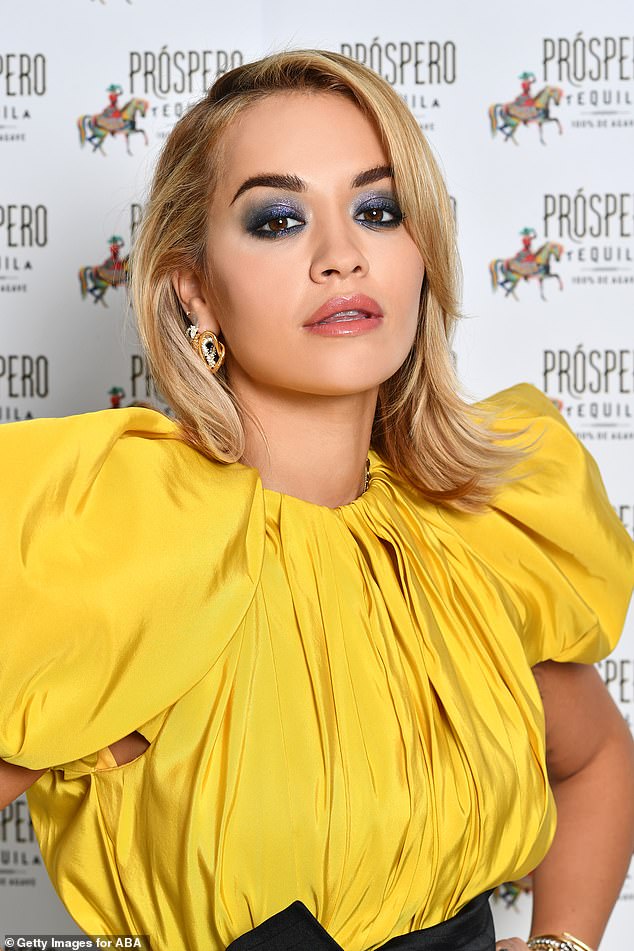 Egg on her face: Rita paid a £10,000 fine and also donated the fee for her Egypt performance to charity [pictured on November 23]