Sarah Jessica Parker was seen making two costume changes on the NYC set of the Sex And The City reboot on Friday afternoon.

The 56-year-old actress was first spotted in a shiny patterned dress layered beneath a flowing cardigan, before gracing set in a business-ready ensemble.

Later in the day, Sarah was joined by returning costars Kristin Davis and Cynthia Nixon for a night shoot.

Transformed: Sarah Jessica Parker was seen making two costume changes on the NYC set of the Sex And The City reboot on Friday afternoon

The forthcoming HBO Max series, titled And Just Like That, features several other original Sex And The City cast members and is said to be 10 episodes in length. No release date has been confirmed.

She contrasted the bright tones of her dress with her light cover-up and a pair of bright gold high-heeled shoes.

The Emmy-winning actress added numerous elements of shine to her clothing ensemble with several articles of jewelry. 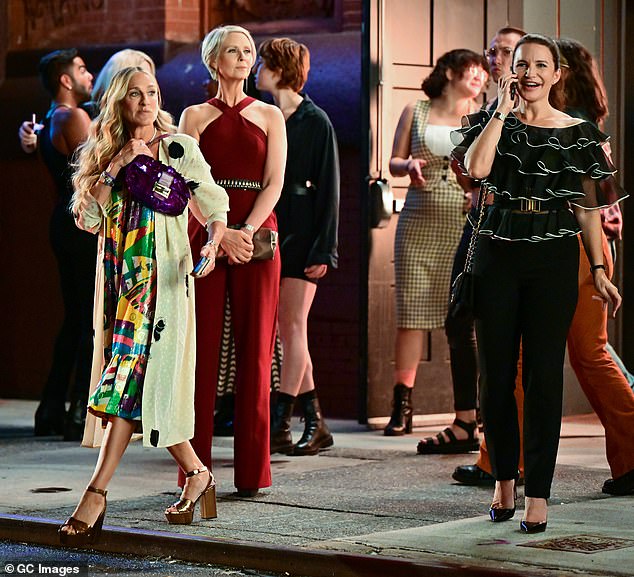 Night shoot: Later in the day, Sarah was joined by returning costars Kristin Davis (left) and Cynthia Nixon (right) for a night shoot

Fashion forward: Kristin (left) showcased her shapely legs in a pair of formfitting slacks, while Cynthia (right) wowed in a red jumpsuit for the shoot 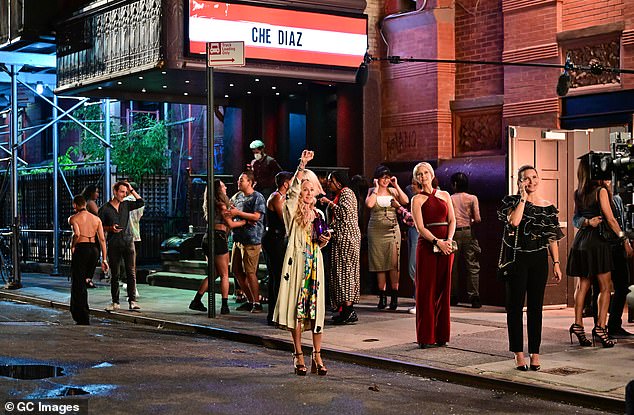 Like the old times! SJP seen flagging down a cab on set of the Sex And The City reboot in NYC

Her gorgeous blonde locks cascaded down onto her shoulders and backside as she made her way around the project’s production area.

Later in the day, Parker was costumed in a much more pared-down outfit that partially consisted of a striped button-up shirt that remained partially open.

She also rocked a form-fitting pair of gray jeans and a matching set of flats.

The performer kept a small bag slung over her right shoulder and carried a book and a water bottle in her left hand.

The Footloose actress also wore a stylish and sizable pair of black sunglasses. 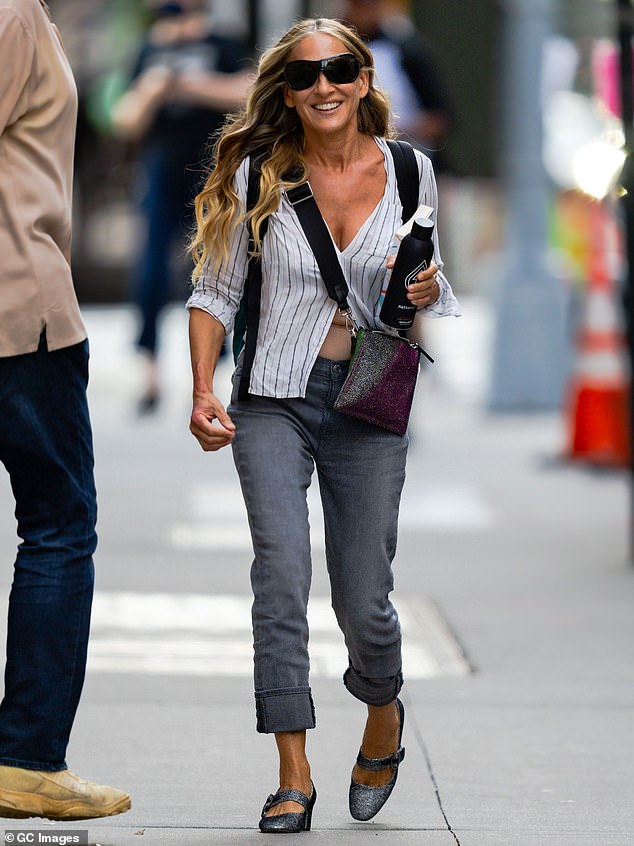 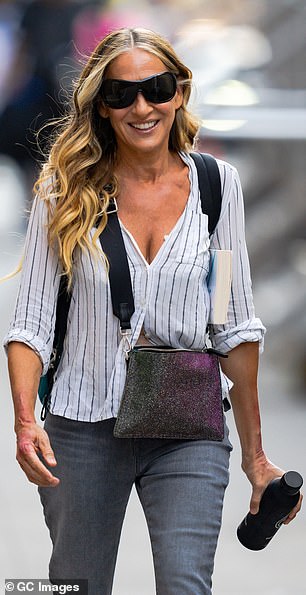 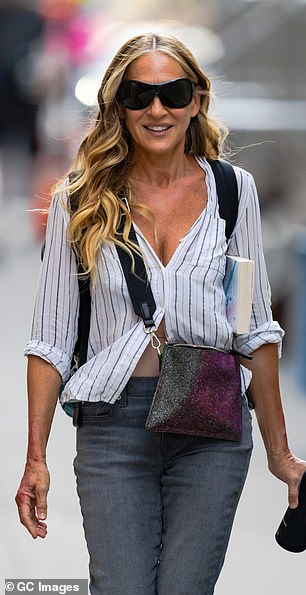 Looking to the future: The Emmy-winning performer sported a sizable and stylish pair of black sunglasses as she made her way around the show’s production area 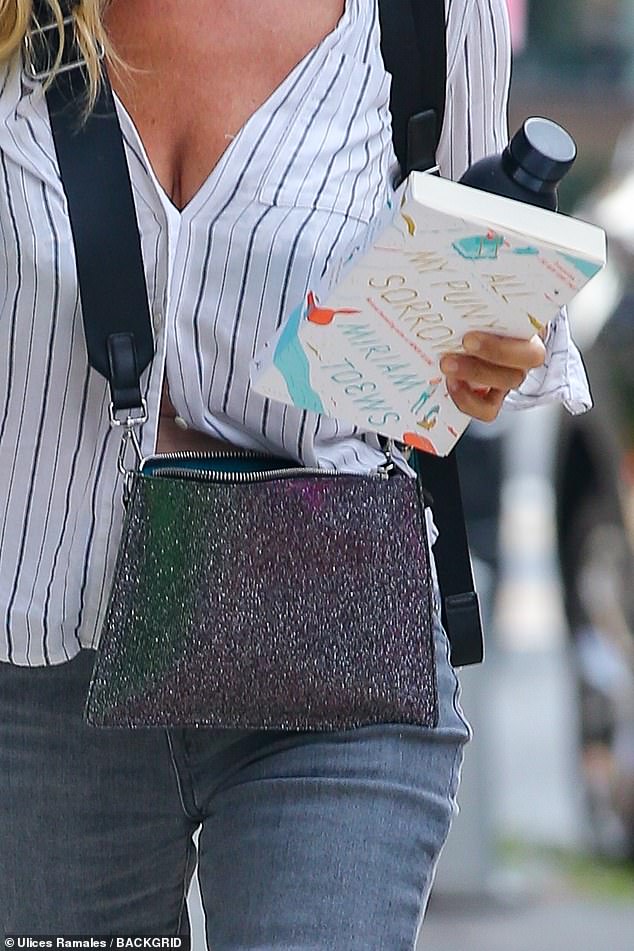 Staying occupied: The actress was seen clutching a book and a water bottle while taking a stroll

Parker’s costar, Cynthia Nixon, was also spotted heading away from the project’s production area on Friday.

The 55-year-old actress kept it low-key, as she wore a grey semi-zip t-shirt and a pair of wide-legged pants, as well as a set of leather shoes.

She notably sported a sizable black facial covering to keep herself protected from COVID-19 during her outing.

Development on the upcoming series was initially announced in December of 2020.

Kim Cattrall, who starred as Samantha Davis in the original series, will not reprise her role for the forthcoming continuation. 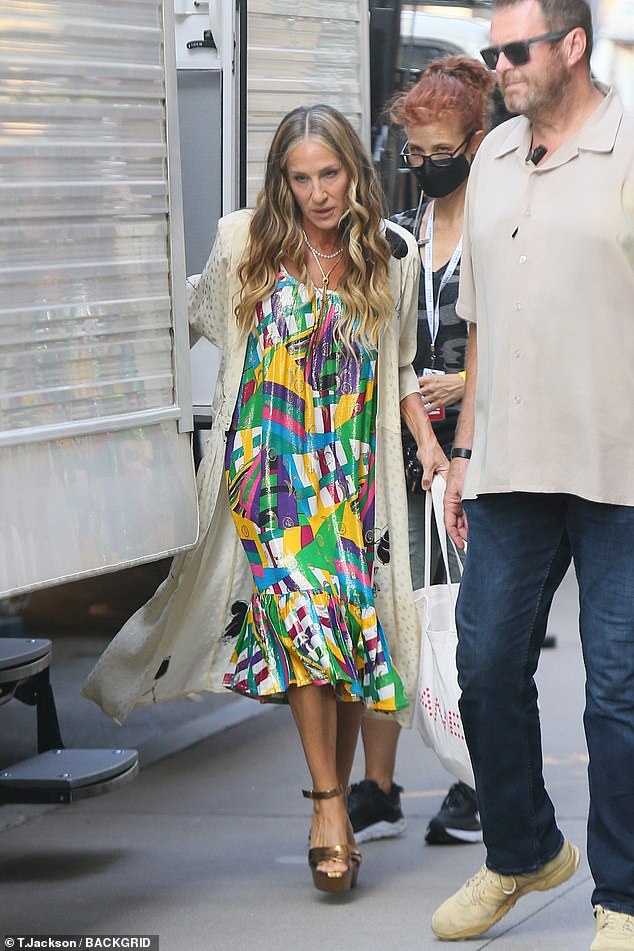 Future release: And Just Like That… will premiere on the HBO Max streaming service at an unspecified date in the future 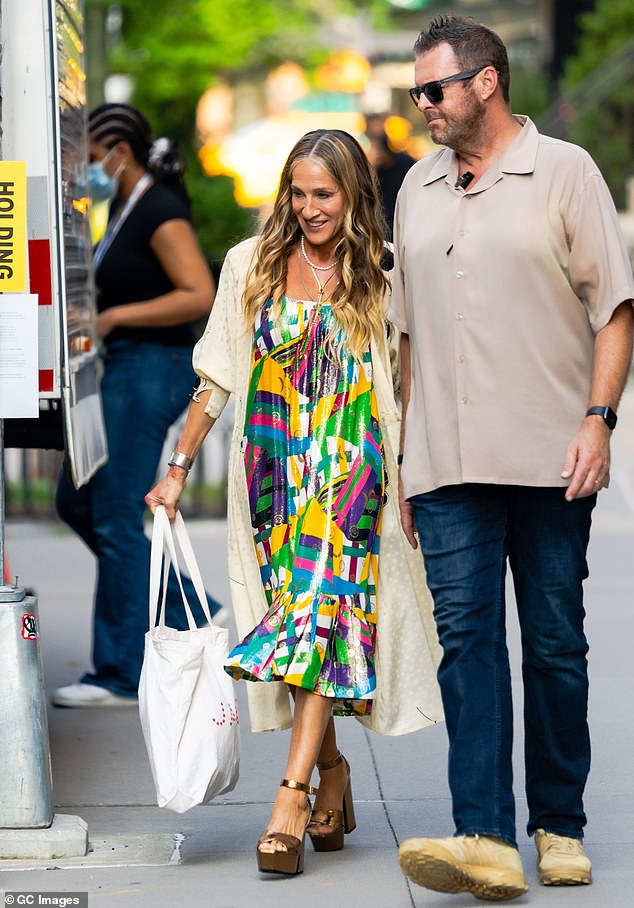 Absent: Kim Cattrall, who portrayed Samantha Davis in Sex and the City, will not return for the continuation of the hit program

This past January, it was confirmed that And Just Like That… would air on the HBO Max streaming service and that the show would run for a total of ten episodes.

Parker and Nixon will portray Carrie Bradshaw and Miranda Hobbes, and Cynthia Nixon is also set to reprise her role as Charlotte Goldenblatt.

Sara Ramirez was added to the main cast of the show, and she will play Che Diaz.

Chris Noth will also appear as John James Preston, better known to fans of the original series as Mr. Big.

Other returning cast members include Mario Cantone, Evan Handler and Willie Garson, among others. 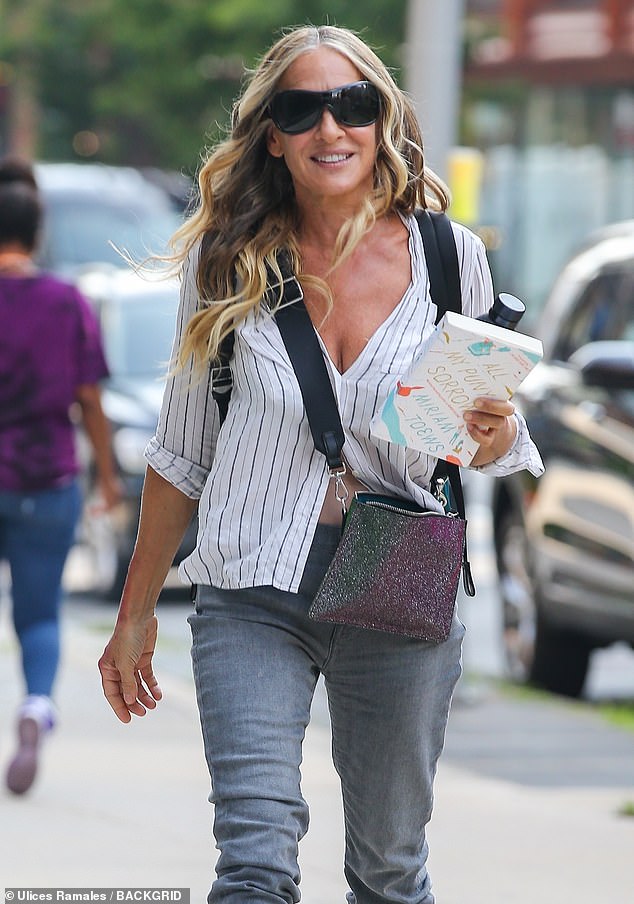 Pushing through: Development on And Just Like That… was first announced in December of last year 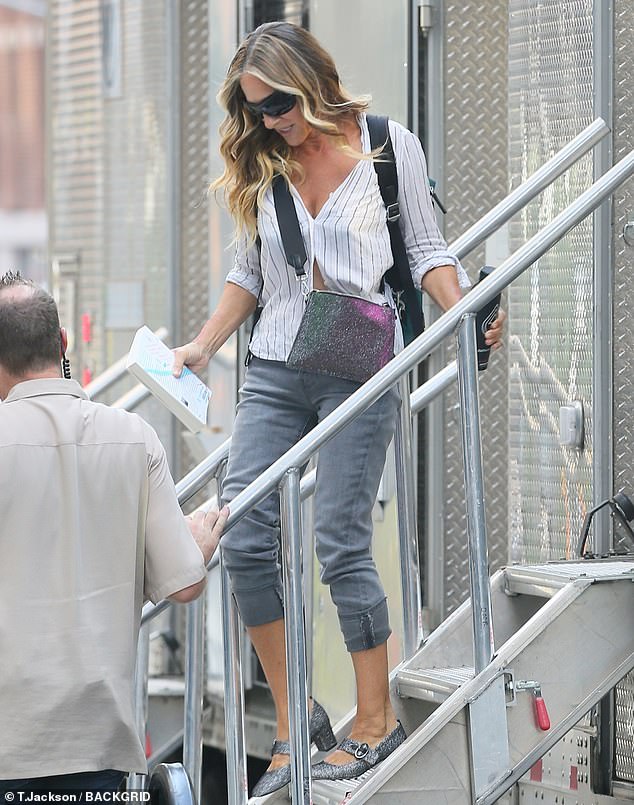 Heavy hitters: Several returning cast members will appear in the new program, and numerous newcomers have also been added to its lineup

Several newcomers have been added to the program’s lineup, including Nicole Ari Parker and Sarita Choudhury.

Michael Patrick King, who worked in several capacities on Sex And The City, will serve as an executive producer on the upcoming continuation.

And Just Like That… currently does not have a set premiere date. 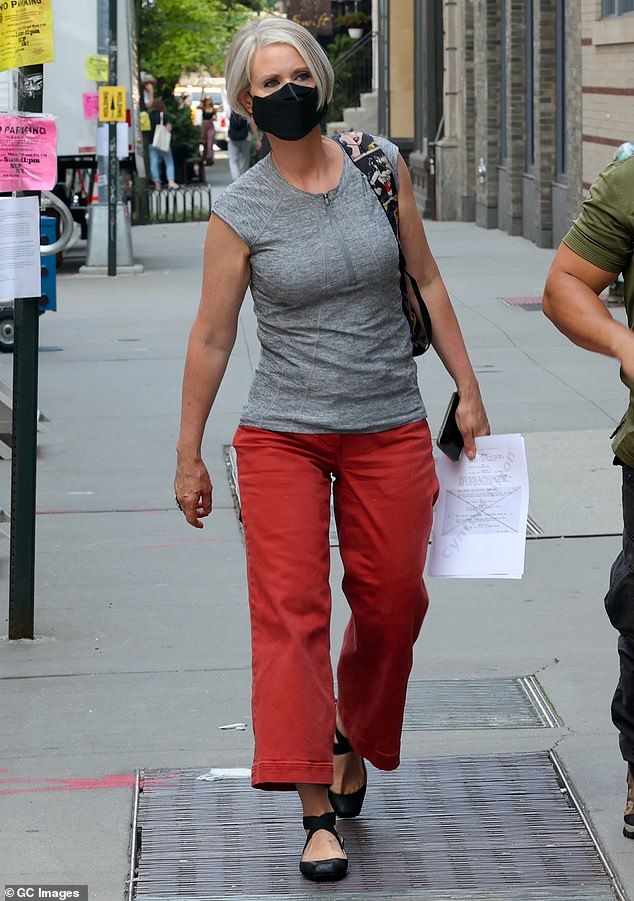 Prepping: Earlier in the day, Cynthia was spotted with script in hand as she hung near set