Simon Cowell, 62, looks strikingly different at the Kids’ Choice Awards after revealing he won’t have more Botox after cosmetic procedure left him looking like a ‘horror show’

And the outing comes after Simon said he no longer has Botox treatments after they left him looking like a ‘horror show.’ 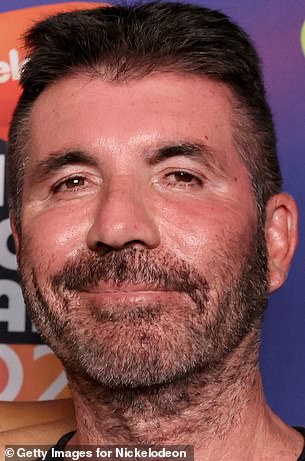 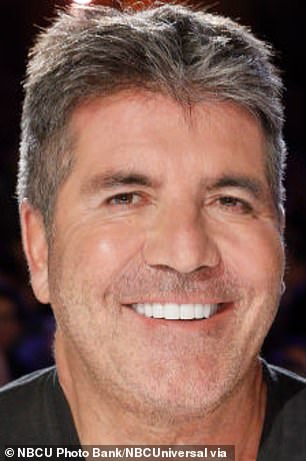 According to The Sun the 62-year-old said that he decided to stop when his strange appearance left son Eric, eight, in hysterics.

The former X Factor judge, who shares his son with partner Lauren Silverman, 44, revealed that as a result he no longer has any filler in his face.

The music mogul began to look significantly differently back in 2016 during the 11th season of America’s Got Talent.

He said:  ‘There was a phase where everyone was having their faces pumped full of this and the other’. 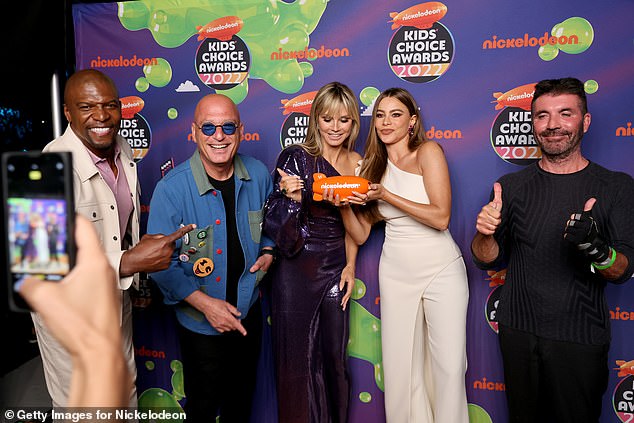 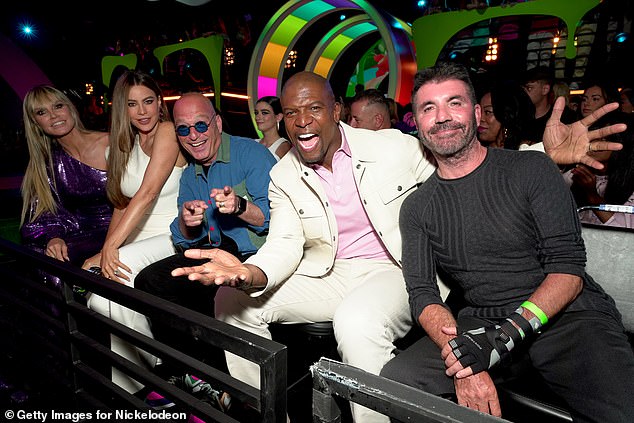 Casual: Simon wore a plain black T-shirt and matching trousers for the awards ceremony, and sported a wearing a wrist cast after recently breaking his arm in an electric bike crash

He went on to reveal that during that period he may have taken things a little too far in his a bid for a youthful appearance.

Saying: ‘I saw a picture of me from “before” the other day, and didn’t recognise it as me first of all’.

Botox is a cosmetic procedure that relaxes the muscles in the face in a bid to smooth out lines and wrinkles.

The TV personality also sported a wearing a wrist cast after recently breaking his arm in an electric bike crash in his hometown of London. 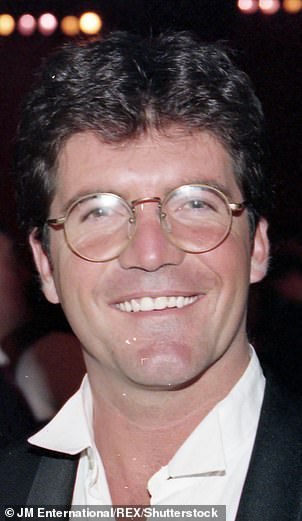 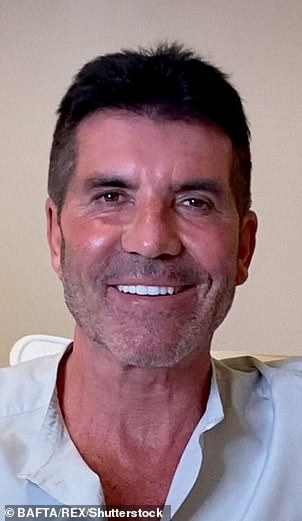 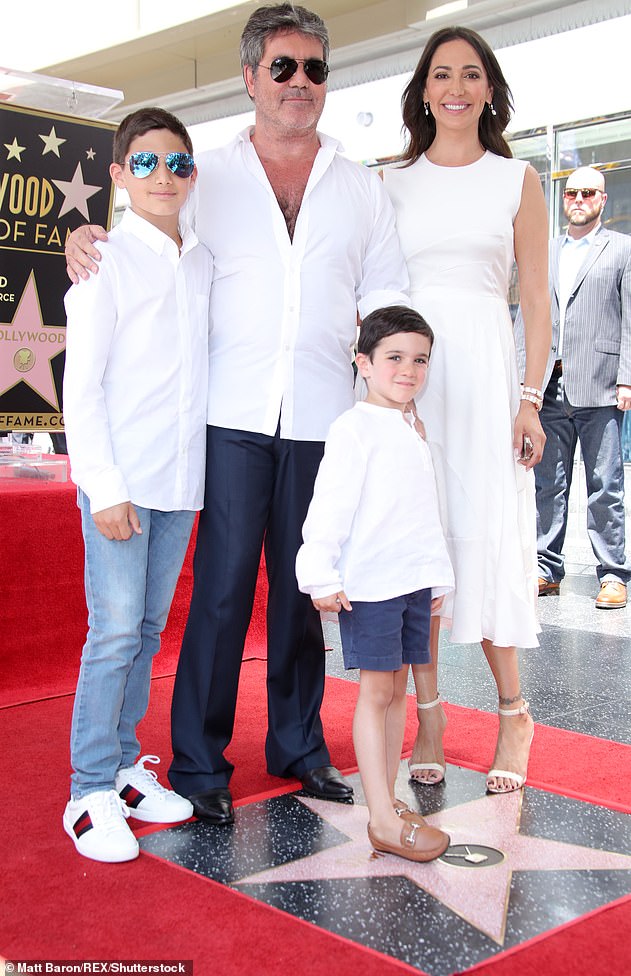 Daddy: Simon revealed he decided to stop Botox injections after son Eric (far right) was left in hysterics his his appearance (pictured in 2018 with girlfriend Lauren Silverman and her son Adam)

Colombian actress Sofia stunned in a chic white one-shouldered jumpsuit boasting a half wrap-skirt detail, while Supermodel Heidi opted for a matching ensemble but chose a dark purple sequined version.

Howie showed off his fun side with a bright blue shirt jacket boasting numerous badges, as Terry rocked a cream jacket and trousers with a baby pink polo shirt.

Pictures taken throughout the years suggest Simon started having Botox injections from 2009 onwards.

Indeed, back in 2019, before he turned 60, Simon admitted to having a facelift and ‘too much Botox.’

In 2018, Simon admitted to having the facelift – but didn’t say when, and said the procedure ‘hurt like hell.’

He told The Sun that he visited cosmetic surgeon Dr Jean-Louis Sebagh, known as the ‘Picasso of dermatology’, for a Silhouette Soft Lift. 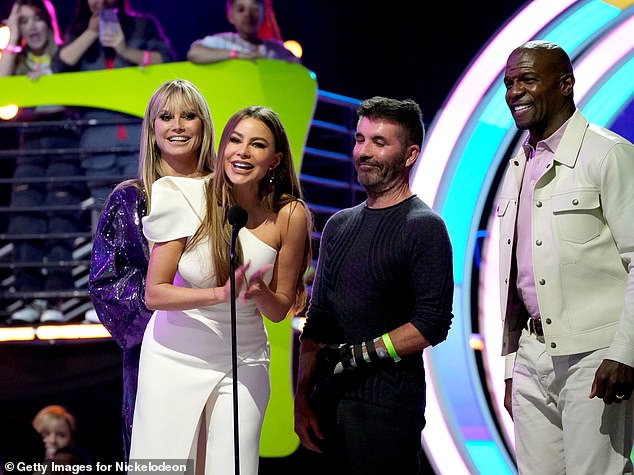 Winners! Simon took to the stars with fellow AGT stars as the talent competition won Best Reality Show at the awards ceremony

He underwent a non-surgical ‘sewing bioplastic-infused thread’ facelift that set him back £2000.

Simon explained at the time: ‘For me now, it’s all about having clean skin. If you have clean skin, you look better. But you have to be very careful with some of this stuff.’

‘There’s lots of things you can do now. You don’t just have to stuff your face with filler and Botox.

‘It hurts like hell but it gets rid of sun damage and unplugs all the cr*p.’ 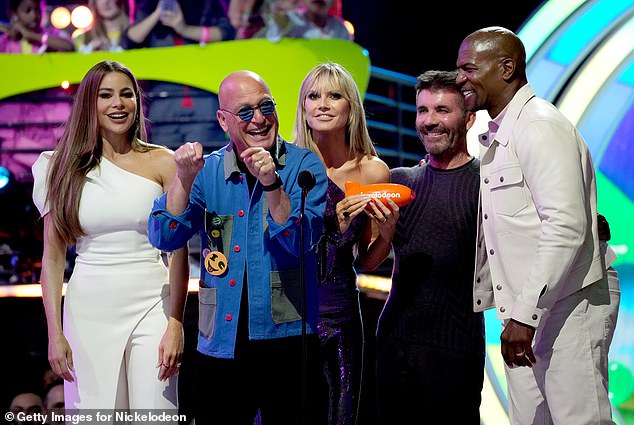 Real talk: Back in 2019, before he turned 60, Simon admitted to having a facelift and ‘too much Botox’

Simon once claimed that using Botox ‘added 10 years’ to his TV career, but that he regrets going overboard with the procedure.

He said: ‘Hopefully I look better now – I probably did have a little too much Botox a couple of years ago, because everyone on TV has it.

‘Now I have facials, but nothing too extravagant at the moment. I have a girl who comes here and does a great face massage – it’s very relaxing.

‘I also had a sheep placenta facial once, which was quite out there.’ 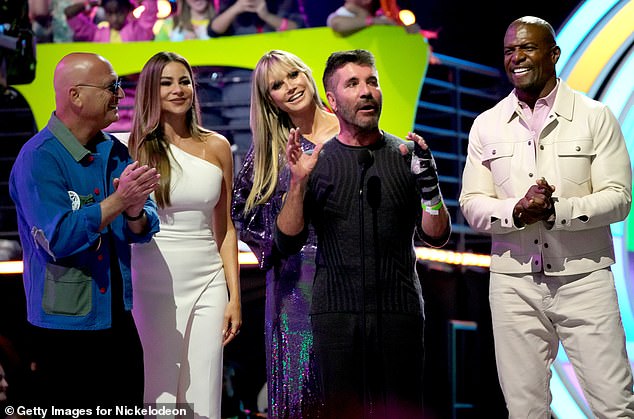 The main man: Simon took to the mic at the Kids’ Choice Awards as AGT won a gong