What family feud? Kyle, 52, and Kim Richards, 56, team up with sister Kathy Hilton, 62, for a night out… following rivalry that played out on RHOBH

Their multi-year sibling rivalry has been chalked up as a ‘clash of egos,’ with drama that unfolded on the Real Housewives Of Beverly Hills.

But famous sisters Kyle and Kim Richards, and Kathy Hilton seemed to be on great terms during a fun night out at Craig’s in West Hollywood on Tuesday.

Despite years of on-off drama, the trio of ladies were seen affectionately posing outside of the celeb-favorite haunt as they appeared to have squashed any beef — for now. 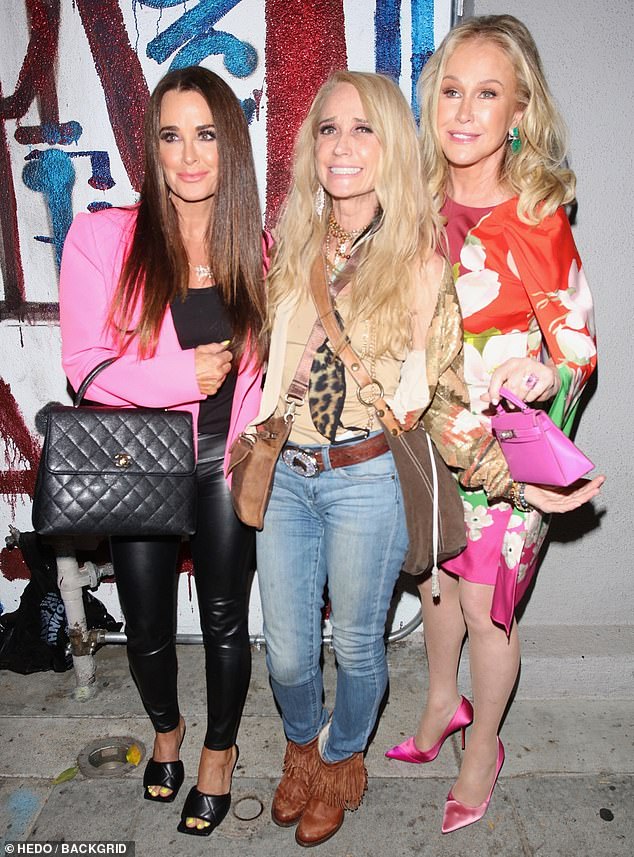 Bedding the beef: Their multi-year sibling rivalry has been chalked up as a ‘clash of egos,’ with drama that unfolded on TV, but sisters Kyle and Kim Richards and Kathy Hilton looked thick as thieves on a night out in LA

Kyle, 52, looked youthful in pleather leggings and a tight black tank top with an eye-catching pink blazer on top for the sister night out.

The OG Housewife slipped her feet into a pair of Bottega Veneta black mules which accentuated a yellow pedicure and she carried a quilted Chanel bag.

Her raven tresses were down and she sported expertly curated glam while posing for some photos with her sisters.

And Kim, 56, donned her take on Western-wear as she rocked blue jeans and brown fringe boots with a matching belt.

Her outfit featured an Aztec-inspired sequined jacket and she layered not one but two purses over her look with arms of colorful beaded bracelets. 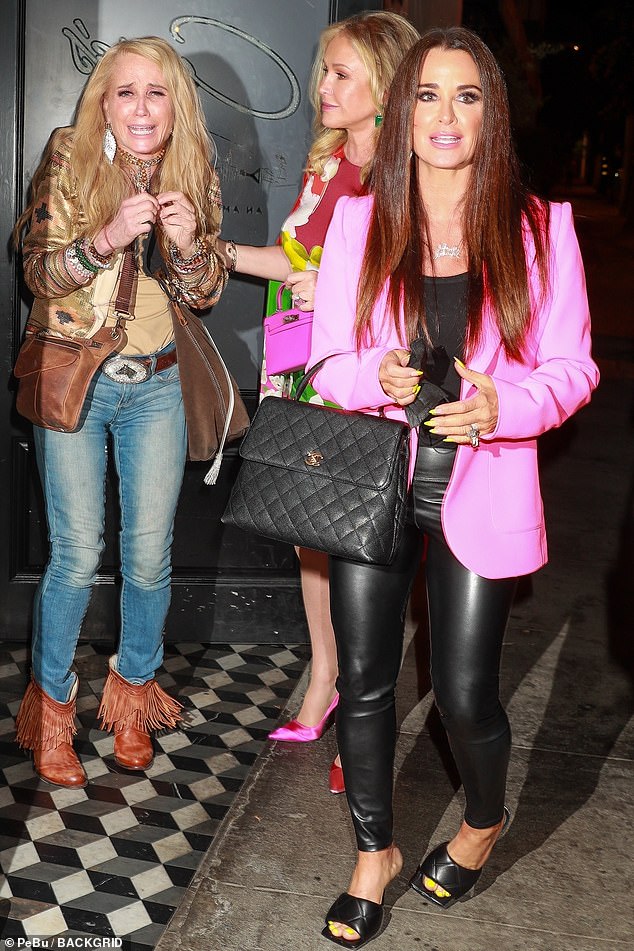 Personal style: For a night out at Craig’s the ladies all exhibited their range of personal style; Kim looked a little camera shy at first but got over it at Kyle and Kathy’s encouragement 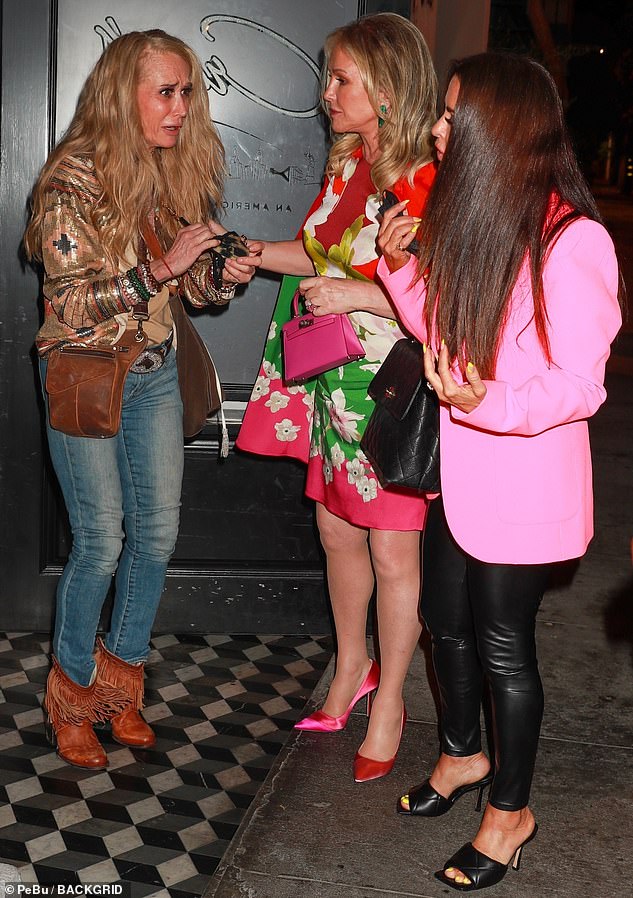 ‘Clash of egos’: Their multi-year feud has been described by some as a ‘clash of egos’ on the show with drama that stems back to childhood 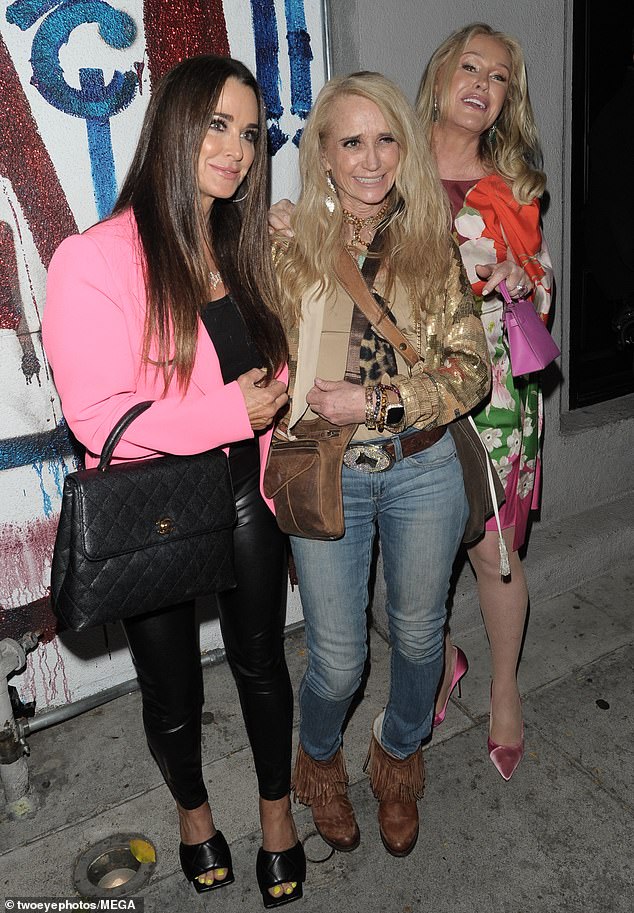 Young Hollywood: From the time they were little Kathy, Kim and Kyle all got their start as actresses in Hollywood

And the Hilton hotel socialite, 62, looked demure in a brightly colored floral frock which she paired with satin hot pink pumps and a micro pink Balenciaga bag.

At first Kim seemed camera shy, but Kyle and Kathy talked her into posing with them outside the venue.

The latest of the trio to join the hit Bravo franchise, Kathy made her debut just last week, despite having a few appearances over the years.

The sisters are related by way of their mother Kathleen Richards, but Kathy has a different father than Kim and Kyle.

Drama between Kyle and Kim was a large part of the first few seasons of RHOBH, with deafeningly clear wounds that stemmed from childhood.

They were said to have been pit against each other as child actresses, and later Kim’s alcohol addiction became a point of contention on the show, with intervention from other castmates threatening their relationship.

Stylish entrance: The OG Housewife looked youthful in pleather leggings and a tight black tank top with an eye-catching pink blazer on top for the sister night out 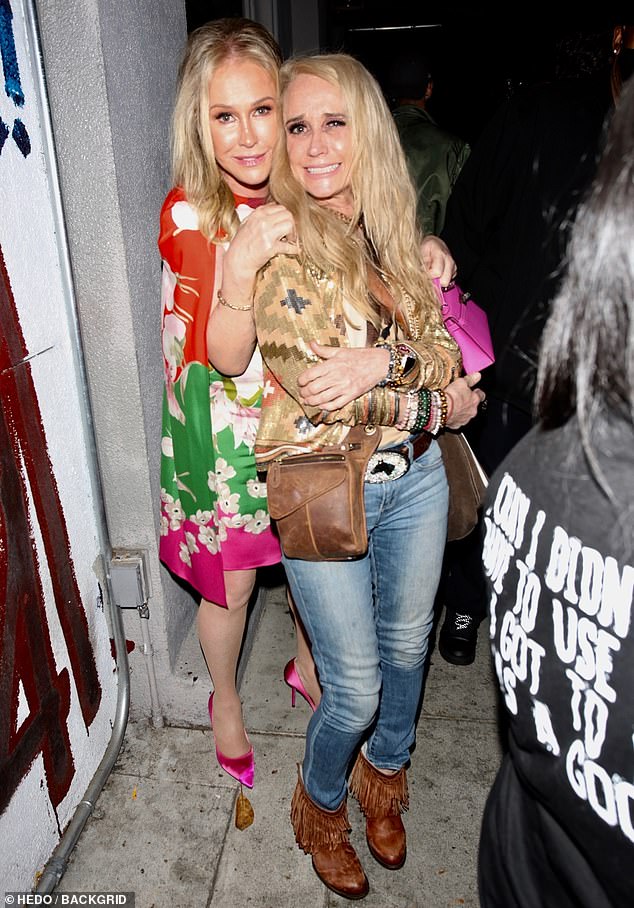 Large family: The sisters are related by way of their mother Kathleen Richards, but Kathy has a different father than Kim and Kyle

In 2015 Kyle opened up about their tumultuous relationship to Andy Cohen, despite confirming Kim’s sobriety following multiple stints in rehab, relapse and even an arrest over the years.

‘We have a very difficult relationship and we will probably always be a work in progress,’ Kyle shared.

That same year it was reported that Kyle and Kathy had also stopped speaking. ‘Kyle and Kim are still working on their issues, and now, Kathy and Kyle aren’t speaking,’ a source told People.

The insider cited ‘complicated family dynamics,’ as the reason, which was reportedly made worse when Kyle’s husband Mauricio Umansky had left Rick Hilton’s real estate company to start the now wildly successful brokerage The Agency. 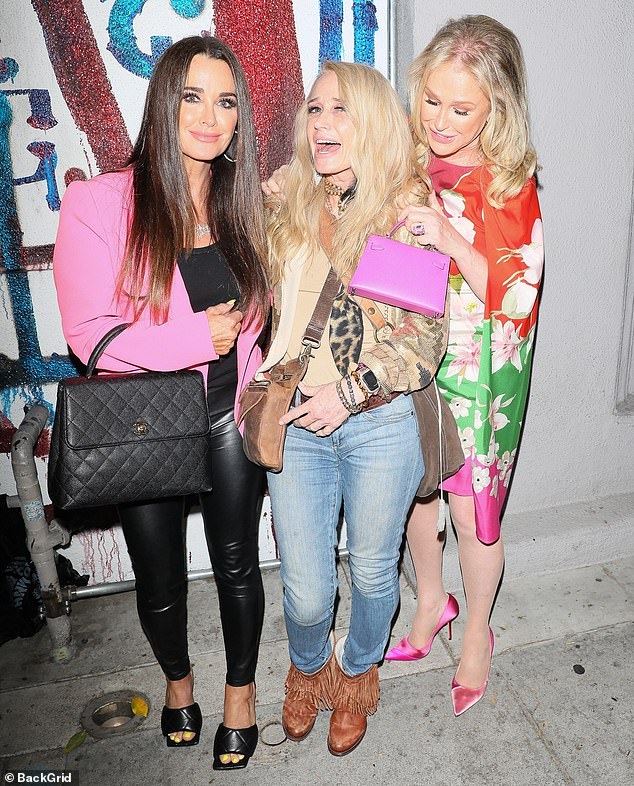 Bouts of tension: In 2015 both Kathy and Kim had reportedly stopped speaking to Kyle, with Kyle owning up to the fact that she had ‘difficult relationships’ with both sisters 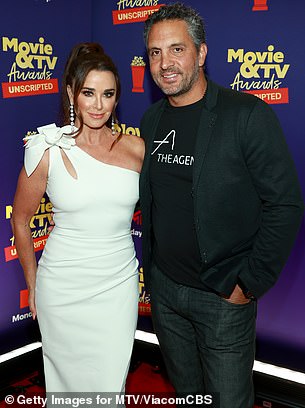 At odds: The rivalry was reportedly made worse when Kyle’s husband Mauricio left Rick Hilton’s company to start The Agency

And things were made worse when Kyle pitched a show about her life to Warner Bros called American Woman, which Kathy reportedly disapproved of.

The feud caused Kyle and Mauricio to be uninvited from Nicky Hilton’s wedding along with two of their daughters, before Kyle’s invited was reinstated.

After it was revealed that Kathy was slated to join the cast, an insider shared that though the ladies were on good terms again, Kyle had reservations the show would ‘upset their dynamic.’

But before Kathy’s casting as a friend of the core group was officially announced, Richards told Us Weekly that having her sister on the show would be an ‘adventure,’ and that they ‘talk every day,’ now.

‘I feel like it’d be an adventure, and people know from watching the show that we’ve gone through some rough times together but we’re great. We talk every day, many times a day, and we laugh. And so, I think it’d be fun.’ 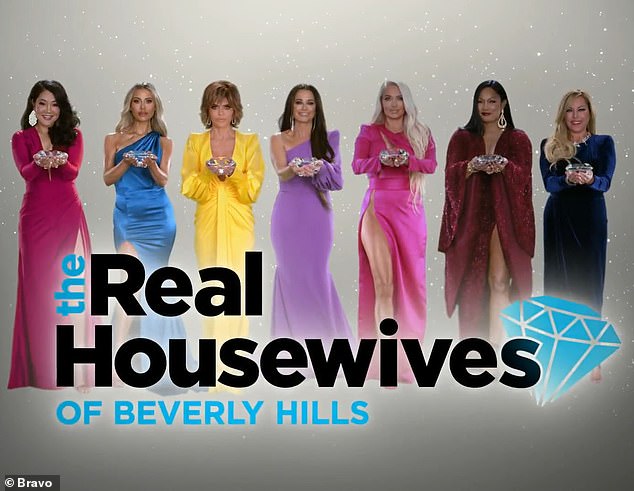 On screen dynamics: When Kathy’s casting as a friend of the core group was officially announced, Richards told Us Weekly that having her sister on the show would be an ‘adventure,’ and that they ‘talk every day,’ now