Sophia Loren, 87, blows a kiss to her adoring fans before being honored at star-studded Academy Museum of Motion Pictures opening gala in Los Angeles

Sophia Loren was seen blowing a kiss towards her adoring fans while attending the Academy Museum of Motion Pictures opening gala in Los Angeles on Saturday.

The 87-year-old Hollywood icon was awarded a special honor for her long-running career in the entertainment industry during the event.

After getting in some solo shots, Loren happily posed for a picture with her son, Edoardo Ponti, and daughter-in-law, Sasha Alexander. 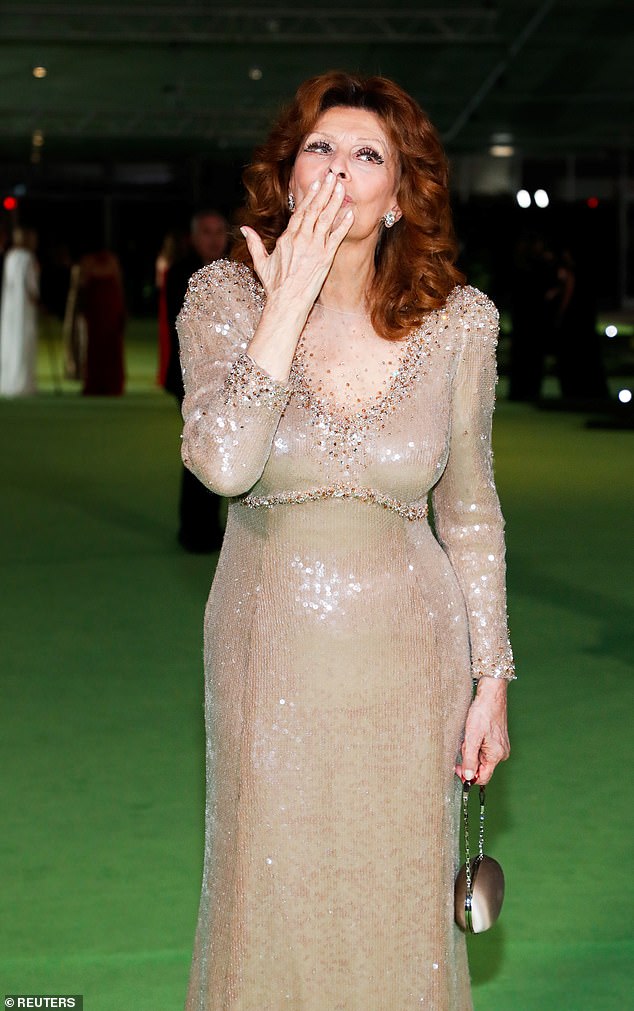 Kiss kiss: Sophia Loren was seen blowing a kiss towards her adoring fans while attending the Academy Museum of Motion Pictures opening gala in Los Angeles on Saturday

Loren sported a lovely light sequined dress that sparkled beautifully in the spotlight as she worked the red carpet.

The It Started In Naples actress also wore a pair of shining flat shoes and carried a small satin purse.

The native of Rome accessorized with a lovely set of earrings and a single ring worn on her left hand.

Her gorgeous dark auburn hair was styled in voluminous curls that cascaded onto her shoulders and the nape of her neck. 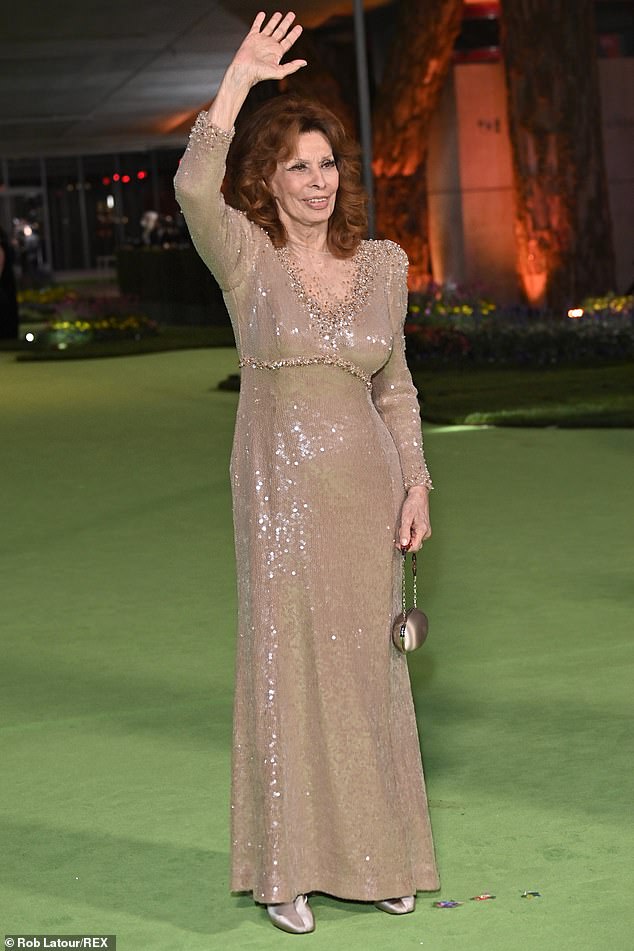 Honoree: The 87-year-old Hollywood icon was awarded a special honor for her long-running career in the entertainment industry during the event

The Academy Museum of Motion Pictures Opening Gala is being held prior to the center’s opening to the public, which will occur on September 30th.

The Museum’s director and president, Bill Kramer, gave a statement via Associated Press where he spoke about the motivations behind the founding of the location.

He noted that those involved in its opening are ‘committed to celebrating and championing the work of film artists, scholars and professions through our exhibitions, screenings, programs, collections,’ and other events.

During the Gala, Loren is set to receive the Museum’s Visionary Award, which is granted upon ‘artists whose work has advanced the art of cinema.’ 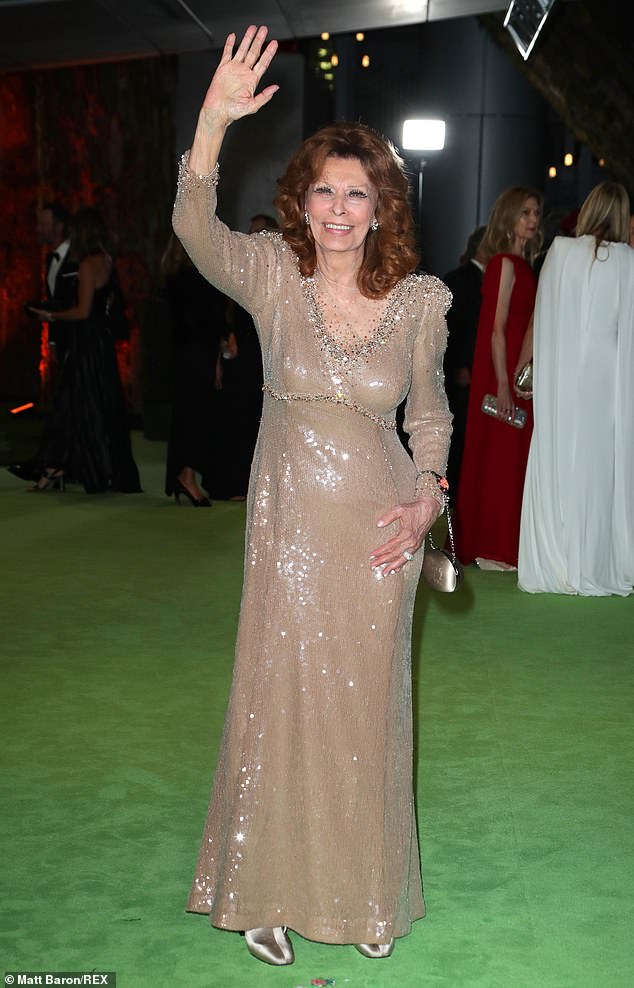 High accolades: Loren will receive the Visionary Award during the event for having ‘advanced the art of cinema’

The performer has notably received numerous accolades for her work in various films over the past decades.

In 1961, the actress won the Academy Award for Best Actress for her performance in the war drama feature, Two Women.

Upon receiving the award, the performer became the first actress to take home the Oscar for a performance that was not in the English language.

She also received a similar distinction for her role in the highly-celebrated feature during that year’s Cannes Film Festival. 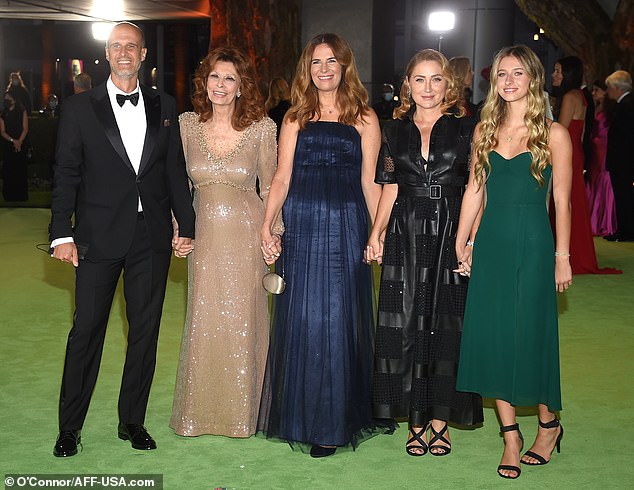 Raking them in: The actress received much praise for her role in the war drama film Two Women, and took home the Academy Award for Best Actress In 1961

Loren was also nominated for the Oscar for Best Actress for her role in the 1964 film Marriage Italian Style, although she lost to Julie Andrews, who starred in Mary Poppins.

In 1991, the Academy chose to honor her with an Honorary Award for Career Achievement for her impressive body of work.

Interview recently republished several quotes from the performer’s sit-downs from over the years, and she previously gave the media outlet her view on what qualified an individual as a bona fide performer.

‘If you want to become a good actress, you have to experience many things and become very mature and understanding—you are to analyze feelings, whatever you feel inside,’ she said. 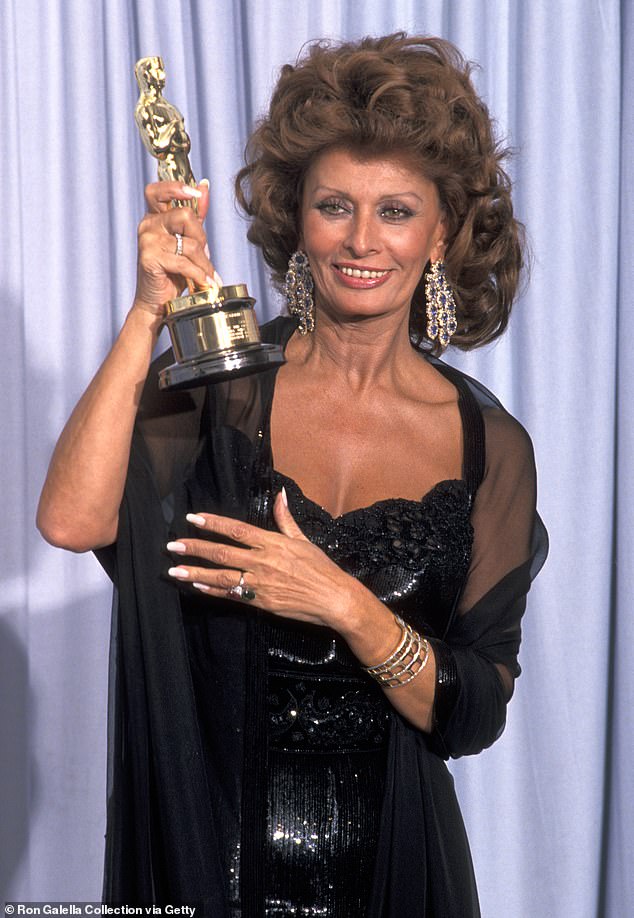 Making it official: In 1991, Loren was given an Honorary Award for Career Achievement by the Academy during the 63rd Annual Oscars