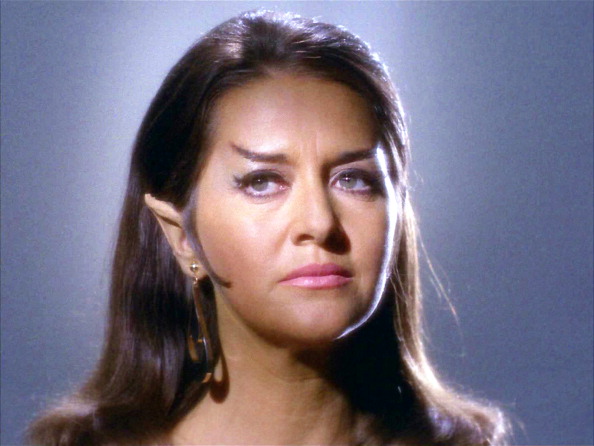 A statement confirming her death read: ‘Linville lived a full life. One whose spirit, passion for art and life was an inspiration to all who had the pleasure of knowing her.’

Born Beverly Joanne Linville, the actor was a regular fixture on television during the 1950s and 60s, appearing in over 100 films and TV shows.

While she never held a recurring role on TV, she guest-starred on some of the era’s biggest TV shows, including Star Trek, in which she became the first female actor to play a Romulan.

In the season three episode The Enterprise Incident, which first aired in 1968, Linville’s Romulan commander was romanced by Spock, played by Leonard Nimoy.

Linvolle also notably starred in the 1961 Twilight Zone episode The Passersby, starring as a widow opposite James Gregory.

On the big screen, Linville appeared in films including the 1976 version of A Star Is Born opposite Barbra Streisand and Kris Kristofferson, Gable and Lombard and 2001’s James Dean, starring James Franco, in which she starred as gossip columnist Hedda Hopper.

Outside of her acting career, Linville was one of the co-founders of the Stella Adler Conservatory of Acting, as a protégé of the famous actress and teacher Adler.

She also wrote the book Joanne Linville’s Seven Steps to an Acting Craft. in 2011.

Linville was previously married to actor and director Mark Rydell from 1962 until their divorce in 1973, and they had two children together, Amy and Christopher.

Linville is survived by Rydell, her children, her her grandchildren, Austen, Ruby and Ginger, and great-grandson Kingston Fisher Lourd Rydell.

Kingston is the son of Austen and his fiancée Billie Lourd, the daughter of the late Carrie Fisher.