Taylor Swift and Joe Alwyn keep their relationship very private, but they occasionally offer a small glimpse into their domestic life. On Friday, November 25, Alwyn shared a shot on his Instagram Stories of what looks like his ankle and a black and white kitty cat snuggled up to it. The cat reportedly belongs to Taylor Swift and his name is Benjamin. 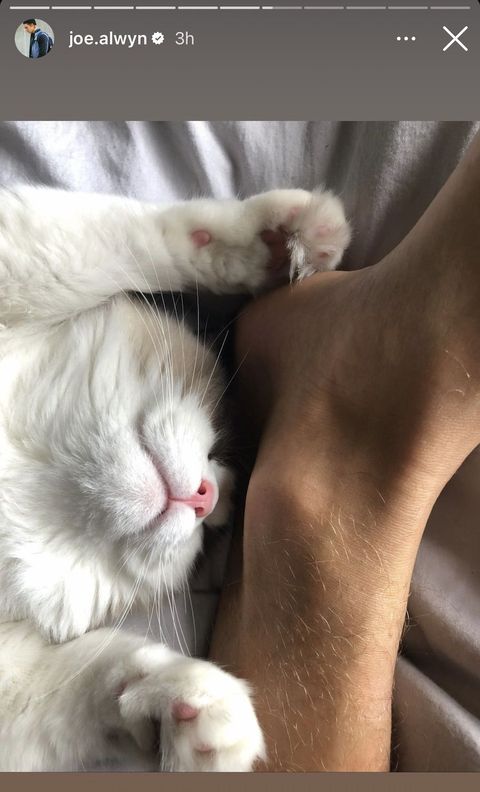 The rest of his Stories are from different times and scenes, especially on set, so it’s unclear if the photo was taken over this Thanksgiving weekend or just a throwback to some other snuggly time. The couple have been together since 2016 and left minimal evidence of their relationship online or in terms of paparazzi photos. Swift is known for her songs about past relationships, but she only hints at her and Alwyn’s connection. He did co-write some songs with her on recent albums folkmore and evermore, under the pseudonym William Bowery, which they worked on together during the pandemic lockdown.

But Swift did say directly that her new song on Midnights titled “Lavender Haze,” is directly about Alwyn and the public scrutiny their romance faces.

“I happened upon the phrase ‘Lavender Haze’ when I was watching Mad Men and I looked it up because I thought it sounded cool,” she said. “It turns out that it was a common phrase that was used in the ’50s where they would just describe being in love. Like, If you were in the ‘Lavender Haze,’ that meant you were in that all-encompassing love glow, and I thought that was really beautiful.”

Swift continued, “I guess theoretically, when you’re in the lavender haze, you’ll do anything to stay there and not let people bring you down off of that cloud. I think a lot of people have to deal with this now, not just ‘public figures’, because we live in the era of social media. If the world finds out that you’re in love with somebody, they’re going to weigh in on it.”

“We’ve had to dodge weird rumours, tabloid stuff, and we just ignore it,” she concluded. “This song is sort of about the act of ignoring that stuff to protect the real stuff.”