Home » Celebrities » The Hidden Marvel Meaning Behind Every WandaVision Commercial

Wanda Maximoff (Elizabeth Olsen) and Vision (Paul Bettany) are living their perfect sitcom life. At least they think they are. As WandaVision pulls the curtain back more and more from its sitcom premise to reveal the mystery action thriller beneath, it’s hard to help from looking for clues in each and every corner of the show. One key place for that so far would be the fake commercials within the fake sitcom, which all seem to have a running thread: they’re connected to Wanda’s past.

We don’t know for sure what’s happening just yet, but it sure seems to be trending toward the idea that the sitcom reality we’re seeing in WandaVision is a projection of Scarlet Witch’s mind; everything we see is stuff that she knows. Hence the commercials’ connections to her past, and, for one example, the lack of clarity about what Vision does at his job. It would seem to be her way of dealing with recent life trauma and loss, but we can’t 100% confirm that yet. We can just analyze what we get so far—and that’s been some interesting, and slightly cryptic, fake commercials.

One running string through all the commercials so far? Each seems to feature the same presenters, one man and one woman. If everything we’re seeing is something constructed from Wanda’s mind, could these two people be her parents? As we learned in Avengers: Age of Ultron, a Stark Industries bomb hit their apartment when she and her twin brother, Pietro, were 10 years old. Just as she likely sees the innocence and constant happy ending of a sitcom as a reprieve from the tragic life she’s had to endure, she could see the commercial pitchman and woman as the two people she trusts most in her life: mom and dad. 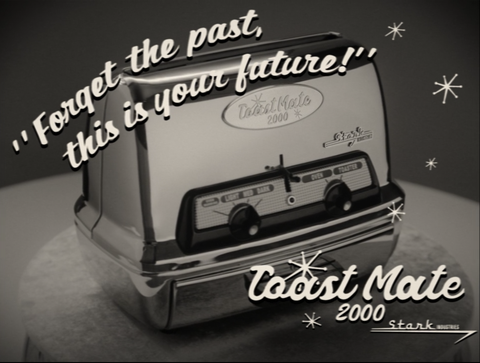 The first commerical in WandaVision features a “new and improved” ToastMate 2000, a funny-looking toaster made by Stark Industries. Stark Industries, obviously, is Tony Stark’s company; Stark Industries built the bomb that killed Wanda and Pietro Maximoff’s parents when they were only 10 years old.

It’s also worth noting the tiny splash of color that makes its way into this first fake commercial; the light on the toaster, as it begins to count down in a very bomb-like fashion, flashes red. The only moments in the two black-and-white episodes to contain color have been things that could theoretically connect Wanda to the real world. Think about it: the SWORD helicopter stuck in the tree (since she clearly is aware of who the Beekeeper is, and “Geraldine” is clearly angling for her to not know her true identity) and Dottie’s blood, which could easily flash her back to any sort of trauma from her MCU film appearances. The flashing light of the toaster is yet another violent memory in Wanda’s head. 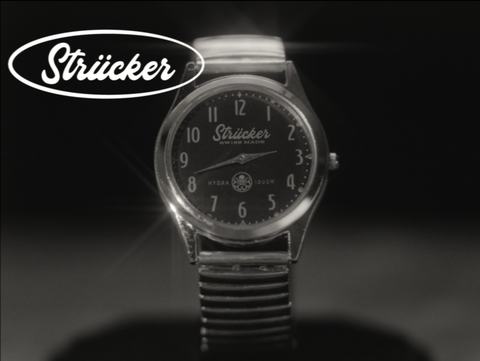 The fake commercial for Episode 2 focuses on a wristwatch from a company called “Strücker.” Right off the bat, we can remember that Wolfgang von Strücker was the name of a Hydra operative who kidnapped and experimented on both Wanda and Pietro; this resulted in both of them gaining their telekinetic and super speed powers, respectively.

Not only is the name named for the man who held the Maxmioff twins captive and changed their lives forever, but the watch is ingrained with the name and insignia of the organization behind it—Hydra. The commercials are evolving with the era, as the ’70s version here has the same pitchwoman—who may just be Wanda and Pietro’s mom—as a stressed out mother who needs a vacation. Flash to the next location, and the pitchman from the previous ads is flailing a fan up and down for her “luxury.” The product is revealed: a soap product called “Hydra Soak,” for “when you want to get away, but you don’t want to go anywhere.” This reference is most likely directly to Wanda’s time as a prisoner of Hydra when she was being experimented on, but it could also be to her current predicament. We think she’s largely projecting and controlling the world of WandaVision, but we don’t know who else has a hand in it; though it seems like Agnes really could. “Find The Goddess Within,” the commercial says to close; we’ve heard frequently that Scarlet Witch is perhaps the strongest Avenger, so this could be yet another nod toward that.