While Timothee Chalamet soaked in applause, Tilda Swinton saw an ideal time for a little prank on her ‘French Dispatch’ co-star.

Pranks are always a little more fun with an audience, aren’t they? While Timothée Chalamet, 25, received a standing ovation at the Cannes Film Festival in France on Monday July 12, Tilda Swinton, 60, decided to slap the name tag from her seat onto her French Dispatch co-star’s back. She also slyly turned his back to the camera for the whole auditorium to see. At least it wasn’t a “Kick Me” sign!

The endearing prank was shared by Variety executive editor Ramin Setoodeh in a Twitter video. Tilda played it completely cool. After turning the actor to flash her name tag on camera, she just kept clapping, while Timothée seemed blissfully unaware that she just goofed on him. It seems like both the stars have a fun and silly friendship with each other. In photos taken on the red carpet before the premiere, it looked like Timothée was saying something funny, and Tilda was giggling along. 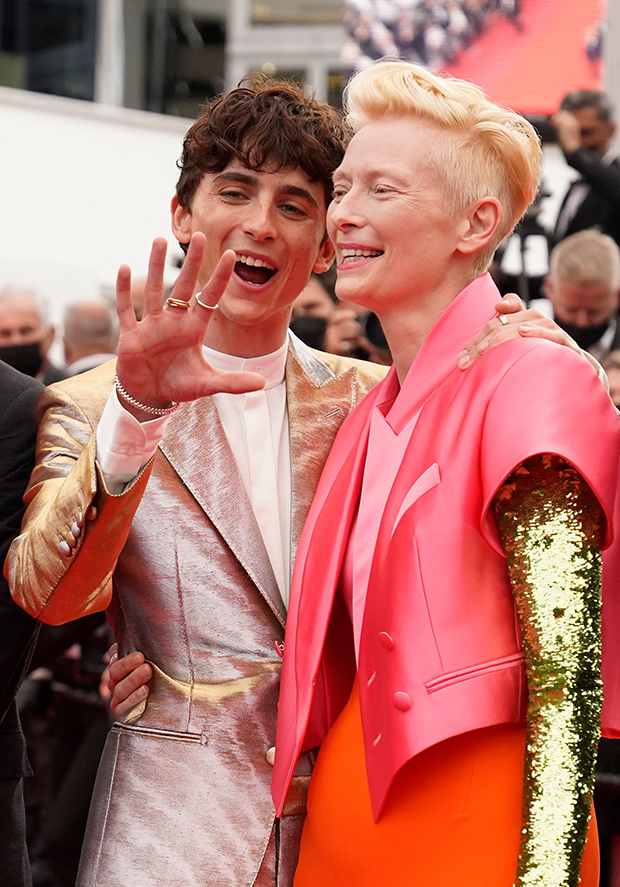 Jokes aside, both stars looked fantastic at the screening of Wes Anderson’s The French Dispatch, which has a star-studded cast including Owen Wilson, Elisabeth Moss, Saoirse Ronan, and many more. Timothée was dazzling in a shiny silver suit, even with the name tag stuck to the back. Meanwhile, Tilda wore a bright pink, short-sleeved blazer, sparkling gold sleeves, and a red skirt.

Even though Timothée seemed clueless in the video, he probably thought it was funny once he found out. The Oscar-nominated actor showed off his sense of humor when he hosted Saturday Night Live in December 2020. Besides hilariously revealing in his monologue that his mom had done background work for the show during the 80s, the actor was spoofed by cast-member Pete Davidson in a Celebrity Family Feud sketch. In another one of his sketches, Timothée played a confused Harry Styles, who hilariously said he doesn’t know who Wendy Williams is. The Call Me By Your Name star returned to the sketch show four months later in April 2021 to join in a “Weird Little Flute” sketch with Pete and rapper Kid Cudi.