Tom Hanks, 65, looks gaunt as he visits The Late Show With Stephen Colbert amid health concerns… following hostile exchange with fan who knocked over his wife Rita Wilson

A gaunt-looking Tom Hanks was seen at The Late Show With Stephen Colbert at the Ed Sullivan Theater in New York City on Thursday amid ongoing health concerns.

He seemed in good spirits, however, despite having a tense exchange with a fan who knocked over his wife Rita Wilson outside of a Manhattan restaurant the day before. 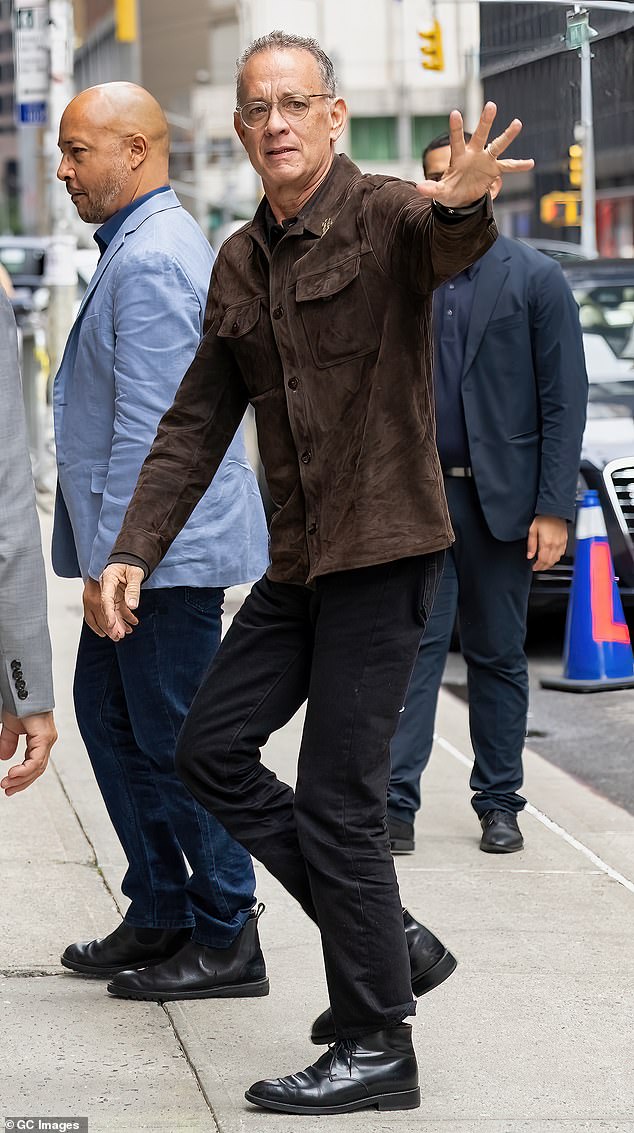 The latest: Tom Hanks, 65, was seen at The Late Show With Stephen Colbert at the Ed Sullivan Theater in New York City on Thursday

In the aforementioned exchange, Hanks and Wilson, 65, were leaving a restaurant when a person bumped into Wilson, almost causing her to lose her balance.

After Wilson was heard yelling, ‘Stop it,’ Hanks was heard saying, ‘Back the f*** off … knocking over my wife?’ before the couple headed to a waiting vehicle.

Hanks has been on the promotional trail for his new film Elvis, in which he plays Colonel Tom Parker. The film, from director Baz Luhrmann, stars Austin Butler in the titular role and Olivia DeJonge as Priscilla Presley. 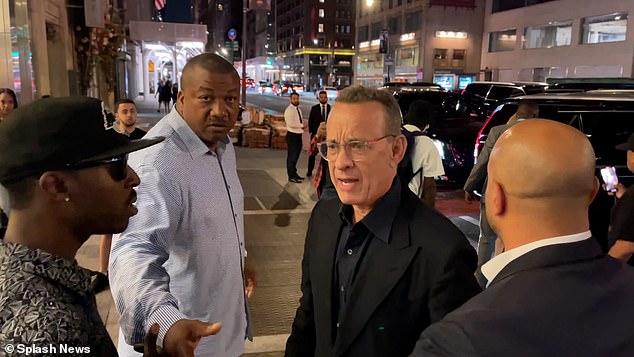 Intense: The appearance comes just one day after he had a tense exchange with a fan who knocked over his wife Rita Wilson outside of a Manhattan restaurant

During his appearance on The Late Show Hanks brushed off his recent woes as he performed an energetic dance routine.

The Hollywood legend proved he was still limber and in good spirits as he teamed up with Stephen, 58, for a sketch about dads filming TikTok dance routines.

The skit saw Tom and Stephen playing embarrassing fathers trying to be down with the kids by filming a viral dance routine.

The duo then performed an energetic dance routine to Lizzo’s About Damn Time, sending the audience wild.

The routine came after he sparked health concerns with his gaunt appearance and trembling. 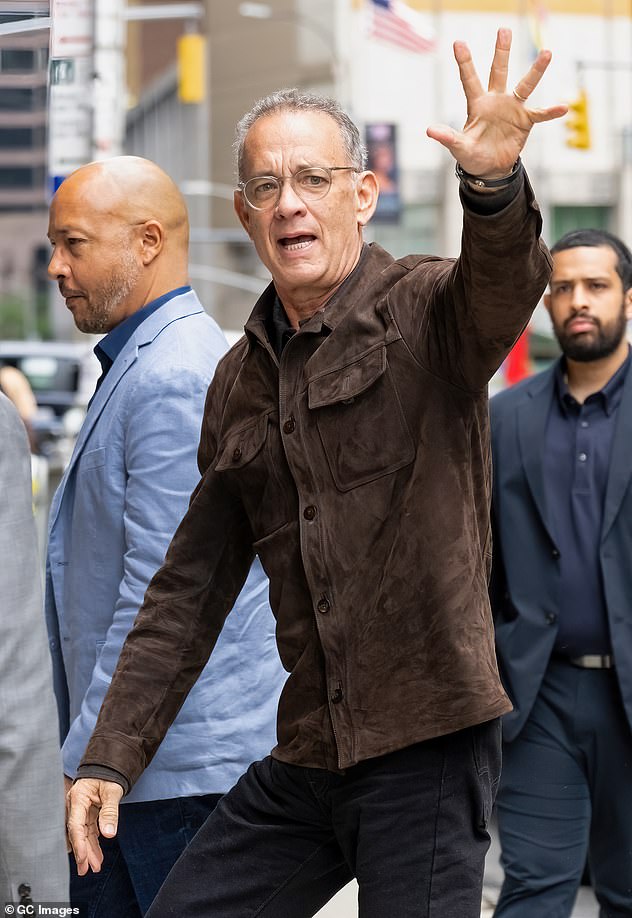 Friendly: Hanks offered a friendly wave in the direction of adoring fans as he arrived for his appearance

Heading out: After sitting down with Stephen Colbert, Hanks swiftly exited the late-night talks show’s studio surrounded by security

Fears were sparked when he seemed unable to control shaking in his arm during a promotional junket for his new film, Elvis.

He appeared at a screening in Brisbane alongside director Baz Luhrmann and co-star Austin Butler earlier this month and his arm visibly shook as he spoke.

‘There is no better place in the world to make a motion picture than right here on the Gold Coast,’ he said, microphone in his right hand, and left hand in his pocket.

The actor has famously shed the pounds for movies in the past, including his role as a desert island dweller in Castaway, and dying AIDS sufferer in Philadelphia.

Hanks is known for his grueling preparations for his films, and it was unclear whether he recent weight loss was for a new role. 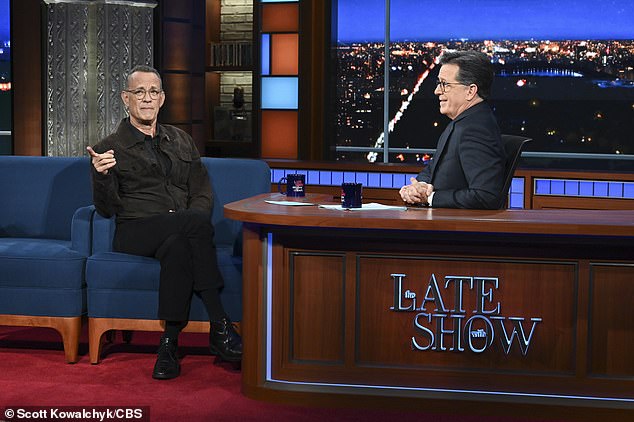 Catching up: The Hollywood veteran was seen chatting with Colbert in the late night appearance

Hanks earlier this week about why he hasn’t posted any tweets to his Twitter page in more than two years.

‘I stopped posting because, No. 1, I thought it was an empty exercise,’ he told The New York Times Magazine on Monday. ‘I have enough attention on me. But also I’d post something goofy like, “Here’s a pair of shoes I saw in the middle of the street,” and the third comment would be, “F*** you, Hanks.” I don’t know if I want to give that guy the forum. 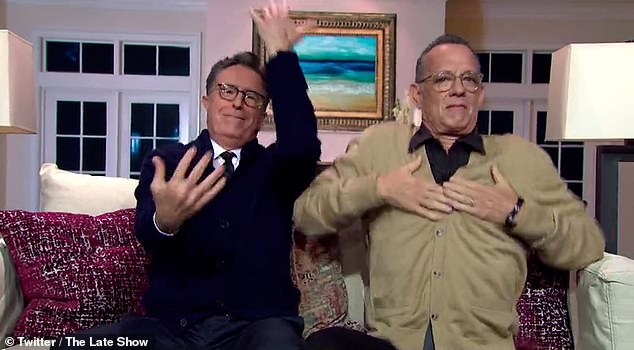 Having fun: Hanks brushed off his recent woes as he performed an energetic dance routine on The Late Show with Stephen Colbert on Thursday

In the interview, Hanks also opened up on straight performers playing LGBTQ characters, saying he would not accept a role in such circumstances in current times after winning an Oscar for his performance of a gay man living with the HIV virus in the 1993 movie Philadelphia.

‘Let’s address, “Could a straight man do what I did in Philadelphia now?” No, and rightly so,’ said Hanks, who in the film portrayed the role of lawyer Andrew Beckett, a gay man who is fired from his law firm after his bosses discover details about his personal life.

He said that ‘the whole point of Philadelphia was don’t be afraid,’ and that ‘one of the reasons people weren’t afraid of that movie is that [he] was playing a gay man. 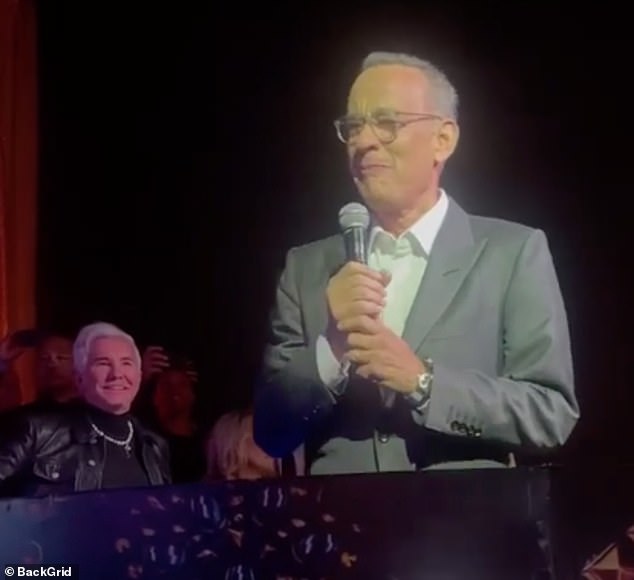 Concerning: Fears were sparked when he seemed unable to control shaking in his arm during a promotional junket for his new film, Elvis

‘We’re beyond that now, and I don’t think people would accept the inauthenticity of a straight guy playing a gay guy.’

Hanks added, ‘It’s not a crime, it’s not boohoo that someone would say we are going to demand more of a movie in the modern realm of authenticity. Do I sound like I’m preaching? I don’t mean to.’

Hanks, who won back-to-back Oscars in 1994 and 1995 for Best Actor in a Leading Role for his performances in Philadelphia and Forrest Gump, said both films were ‘timely movies, at the time, that you might not be able to make now,’ as they ‘would be mocked and picked apart on social media.’ 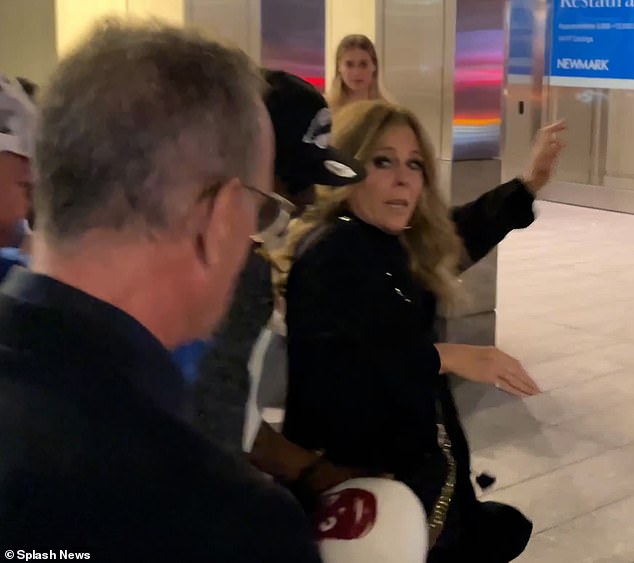 Back the f**k off!’: Tom rushed to protect his wife Rita in New York on Wednesday after an aggressive fan nearly knocked her over