Home » Celebrities » Was Meghan McCain Really Miserable During Her Time At The View?

Was Meghan McCain Really Miserable During Her Time At The View?

Meghan McCain announced her somewhat surprising departure from “The View” on July 1 when she candidly told her co-hosts and viewers that she was serving out her final season and would not be back in August. McCain said it was “not an easy decision” and noted “it took a lot of thought and counsel and prayer” as well as discussions with her nearest and dearest. She added, “On a professional note, this show is one of the hands-down greatest most exhilarating most wonderful privileges of my entire life.”

It’s also been confirmed that it was very much McCain’s decision to step away, which ABC echoed in a statement which claimed she “recently came to [them] with her decision to depart the show at the end of this season, a difficult choice that she made for her and her family that we respect and understand” (via ABC News).

The network added that it wished “the best for Meghan as she plans her next chapter, and thank her for the passion and unique voice that she shared with us and our viewers each day.”

While McCain suggested in her own monologue on the show that her decision to leave was influenced by her desire to stay closer to her family in Washington D.C (the show films in New York), sources are now revealing more about why she reportedly decided it was time to step away. Read on for all the details. 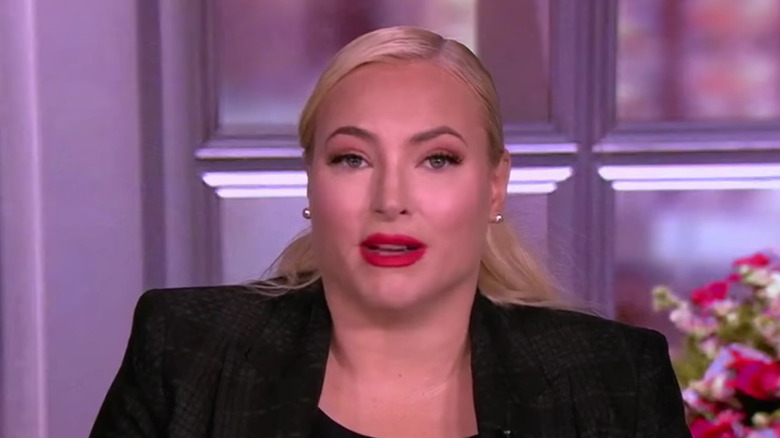 Though Meghan McCain wanting to spend more time in Washington D.C. no doubt did influence her decision, she’s supposedly “been wanting to get out” for a while and had “been miserable since she started,” according to Page Six’s insider.

As for what really pushed her to exit, sources claimed former ABC President James Goldston leaving the network really changed things for the ladies of “The View,” particularly for McCain as she “no longer had the climate of protection she had” under him. “When he was there, there was this sense of retribution if you didn’t get along with [McCain]. She would act out, yell at the audience, guests, and fight with her co-hosts [on-air], but there was never an ‘Okay, you have to get along with your co-hosts,'” they claimed.

The source also alleged that new ABC President Kim Godwin supposedly didn’t have the same approach to McCain’s outspoken views and her relationship with her co-hosts as Goldston did. “There was a meeting. [Godwin] didn’t take a side, but she came in with a stern, ‘You have to figure this out,'” they claimed.

It was also claimed by the insider that McCain was supposedly even offered the chance to be a contributor on ABC News if she stayed on “The View,” but she wasn’t interested. “She’s just had enough. She doesn’t need it anymore — she really doesn’t need it.”