And the talk show diva, 56, showcased her eccentric style while making her way to work in NYC on Tuesday.

Wendy turned heads wearing a funky sweatshirt adorned with stuffed animals and upon her arrival at the studio she stripped off her leggings to flash a bit of her backside.

Wacky! Wendy Williams turned heads while wearing a stuffed animal covered sweatshirt while making her way to work in NYC on Tuesday… and later swapped her leggings for fishnets

The star was ready to strut her stuff, donning nude tights and fishnets underneath her sporty bottoms.

Though her wild plush toys were the centerpiece of the look, that didn’t stop the New Jersey native from still rocking bold accessories.

The syndicated superstar wore her caramel tresses in long waves but was fresh-faced, seen before her makeup artist dolled her up for the cameras.

Right before the star disappeared inside, she yanked at the bottom of her sweater, trying not to be too cheeky. 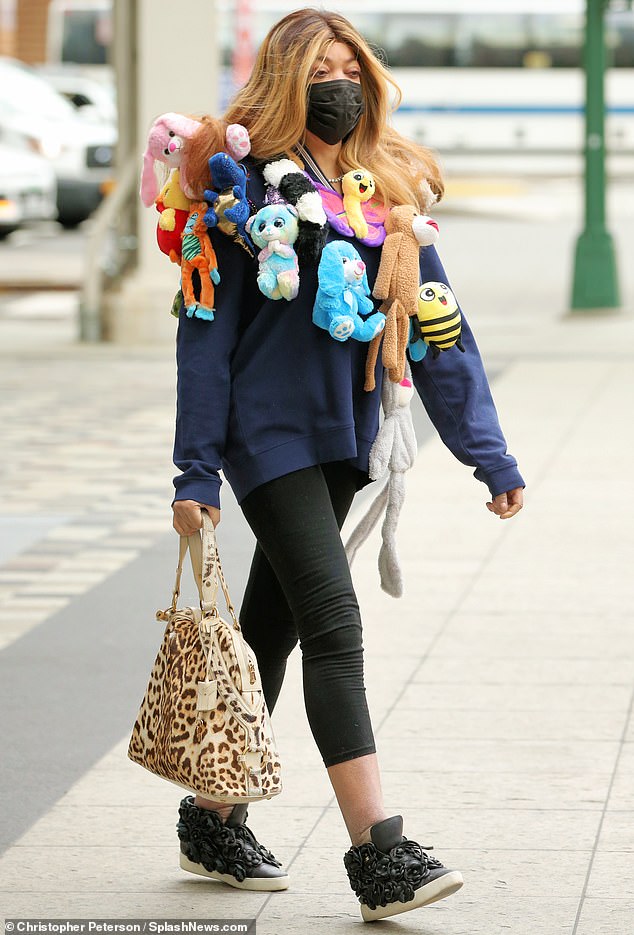 Animal instincts! Though her wild plush toys were the centerpiece of the look, that didn’t stop the New Jersey native from adding a bold leopard bag and ornate leather sneakeres 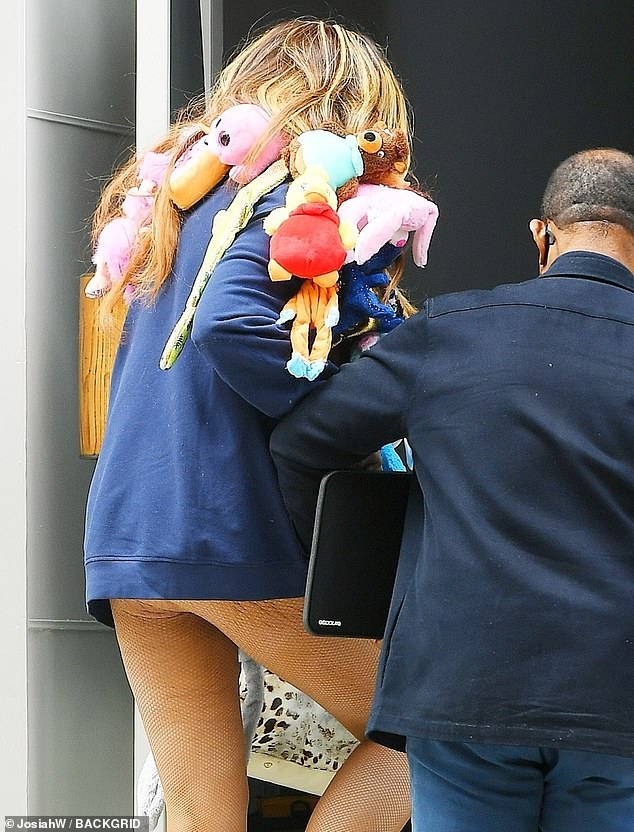 Best tressed: The syndicated superstar wore her caramel tresses in long waves but was fresh-faced, seen before her makeup artist dolled her up for the cameras

Williams’ silly but sexy ensemble comes after news she has a new man in her life, now dating a contractor named Mike Esterman who lives in Maryland.

They met through a recurring Date Wendy segment on her talk show where she crowd-sourced a boyfriend from a series of contestants.

Mike, 53, is ‘age-appropriate, and he’s got jokes,’ Wendy said, selecting him on the February 26 episode of the chat show.

After their two-day first date he gave an interview to Access sharing that there was a ‘spark’ but that ‘there was no sex.’ 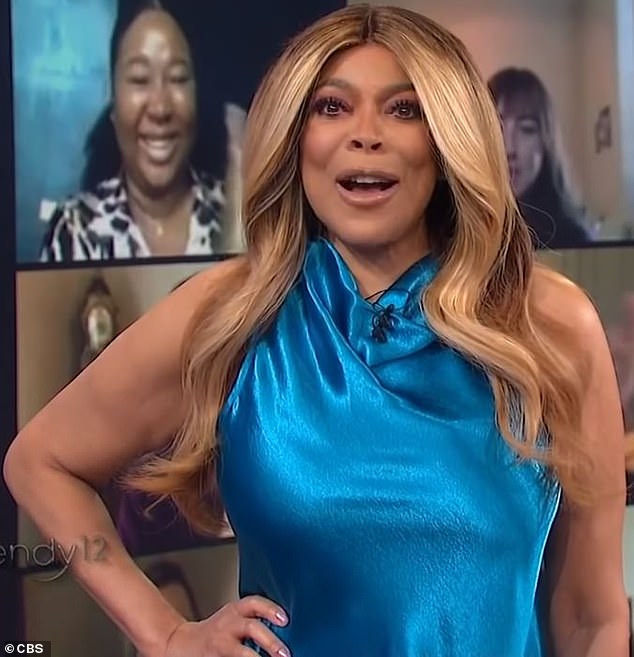 ‘No more hiatus, by the way, until the end of the season’: Her talk-show made its grand return to the airwaves this Monday morning after going on hiatus for a little over two weeks

‘I want to go back to New York, I’d love to get to know her a little bit more,’ he said, gushing that ‘she’s very interesting.’

Meanwhile near the end of March she said on her show that they were trying to make long-distance work amid the ongoing pandemic.

‘He lives in Maryland, and I live here. Because of the virus, you can’t do all that traveling. You can’t. A smart one doesn’t,’ she said while clarifying that ‘I’m going to see him this week,’ and dishing: ‘We talk all the time.’

Wendy filed for divorce from her husband of 22 years Kevin Hunter in April 2019 after his affair with massage therapist Sharina Hudson resulted in a baby. 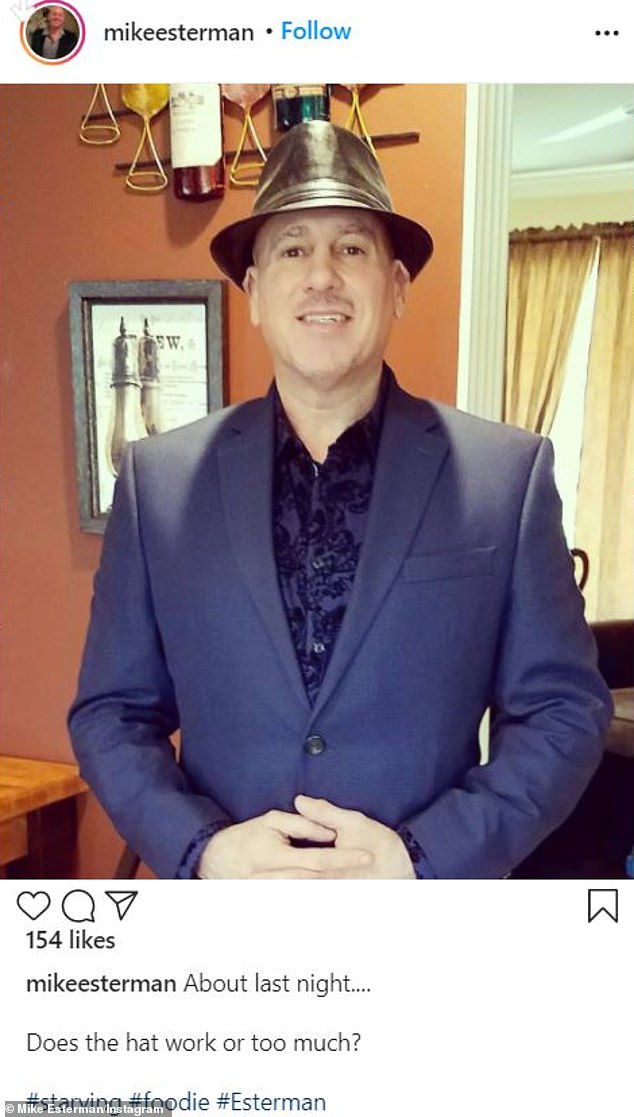 Dapper Dan: Meanwhile as far as her personal life is concerned she is dating a contractor called Mike Esterman who lives in Maryland

During their marriage Kevin was also Wendy’s manager but the professional relationship has been severed along with the romantic one.

However they have remained co-parents to their son Kevin Jr., a 20-year-old who is currently away at college in Florida.

Mike understands Wendy’s circumstances to a degree as he was also cheated on by a girlfriend he ‘treated like a princess,’ he told The Sun.

In recent interviews Wendy has said she is open to the prospect of getting married again but unwilling to move in with a man.