Will Smith won his first award from the Golden Globes on Sunday for his moving portrayal of Venus and Serena Williams’ father Richard Williams in King Richard.

The 53-year-old rapper-turned-actor was honored with Best Actor in a Motion Picture — Drama after previously being nominated five times by the award ceremony, which was not televised or live-streamed this year.

Smith’s victory comes against an impressive array of male talent, including Mahershala Ali (Swan Song), Javier Bardem (Being the Ricardos), Benedict Cumberbatch (The Power of the Dog) and Denzel Washington (The Tragedy of Macbeth). 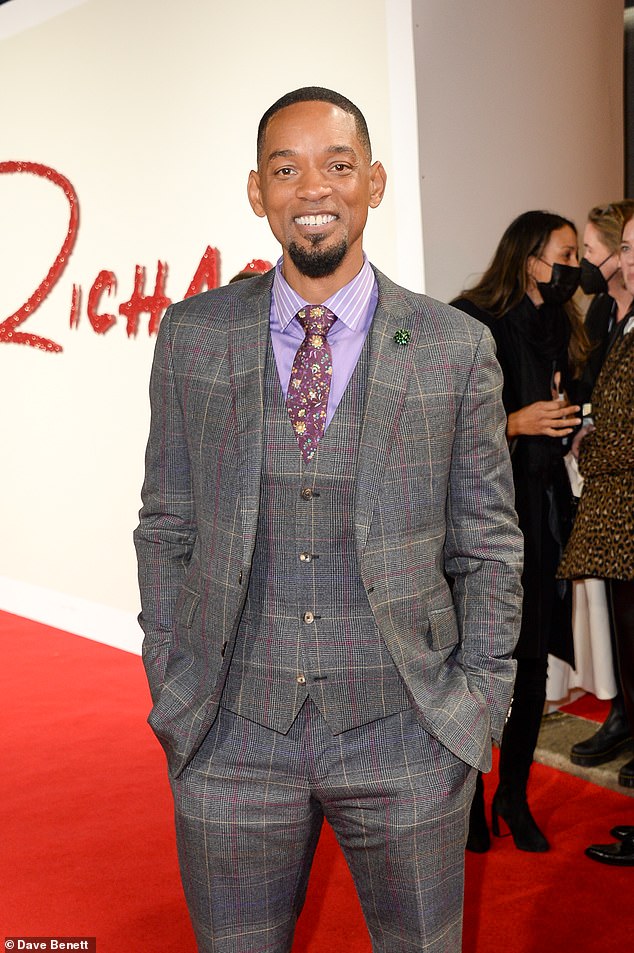 Finally! Will Smith, 53, won Best Actor in a Motion Picture — Drama at the 2022 Golden Globes on Sunday. It’s his first win after six nominations going back to his Fresh Prince days

Smith was first nominated for a Golden Globe for Best Actor in a Television Series Musical or Comedy in 1993 and again in 1994 for her starring role on the hit comedy series The Fresh Prince Of Bel-Air.

However, he lost the first year to John Goodman for Roseanne, and Jerry Seinfeld bested him in 1994 for his eponymous NBC comedy series.

The Hollywood Foreign Press Association, which puts on the Globes, also recognized the actor’s transition into more serious roles with a nomination in 2002 for his Muhammad Ali biopic Ali, which was directed by Michael Mann.

However, he lost to Russell Crowe for A Beautiful Mind.

Online only: Smith’s win was announced on social media, as the Golden Globes featured no audience this year and were not televised or live-streamed 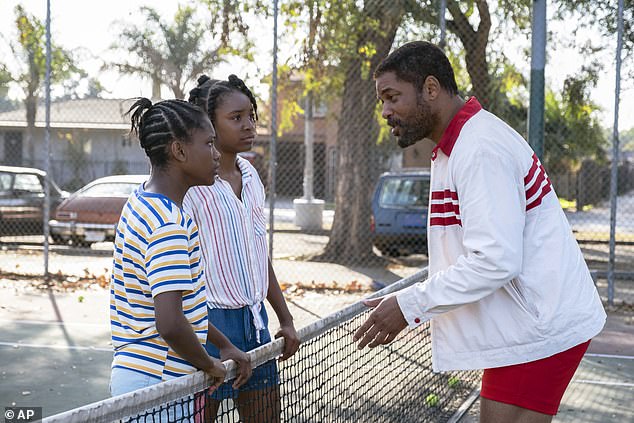 Heartwarming: He stars in King Richard as Richard Williams, the father of Venus and Serena Williams who charted a course for them to tennis stardom

The Men In Black star was nominated again in 2007 for The Pursuit Of Happyness, which he starred in with his son Jaden, and then in 2016 for Concussion, but he lost both of those awards too.

Smith followed suit with many other stars and didn’t appear to comment on his win.

The Golden Globes are still being held at the Beverly Hilton as usual, but without an audience.

NBC announced last year that it would no longer be broadcast the ceremony in 2022, though it left the possibility of returning the show to the air in 2023.

An expose by the a Los Angeles Times revealed that there were no Black members of the HFPA, and the organization’s members have also been accused of corruption in the past. 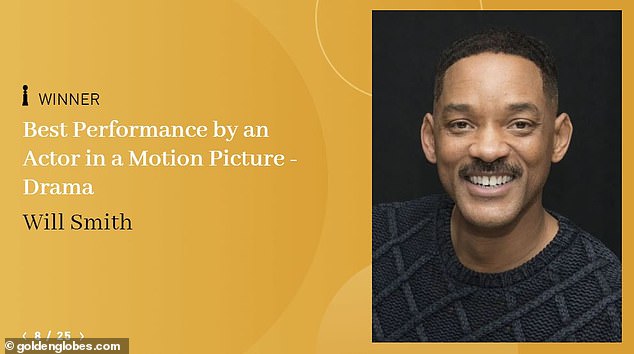 Snubbed: NBC announced last year that it would no longer be broadcast the ceremony in 2022 following a Los Angeles Times report that the Hollywood Foreign Press Association has no Black members

‘We continue to believe that the HFPA is committed to meaningful reform. However, change of this magnitude takes time and work, and we feel strongly that the HFPA needs time to do it right,’ NBC said in a statement after several celebrities returned their past awards.

‘As such, NBC will not air the 2022 Golden Globes. Assuming the organization executes on its plan, we are hopeful we will be in a position to air the show in January 2023.’

Despite the audience- and broadcast-free ceremony, the Globes still announced nominations in December and announced the winners via Instagram on Sunday.

King Richard, which is directed by Reinaldo Marcus Green and produced by Venus and Serena Williams, details Richard Williams plan to make his daughters Tennis pros starting when they were just children.

The film currently boasts an impressive 90 percent fresh rating from critics surveyed by Rotten Tomatoes, most of whom have commended Smith’s moving performance.

The movie, which was released simultaneously in theaters and on HBO Max, has emerged as an early Oscars frontrunner, and Smith’s win among a crowded field may make him a favorite to win the Best Actor prize at the upcoming ceremony.

Nominees for the Academy Awards will be announced on February 8. 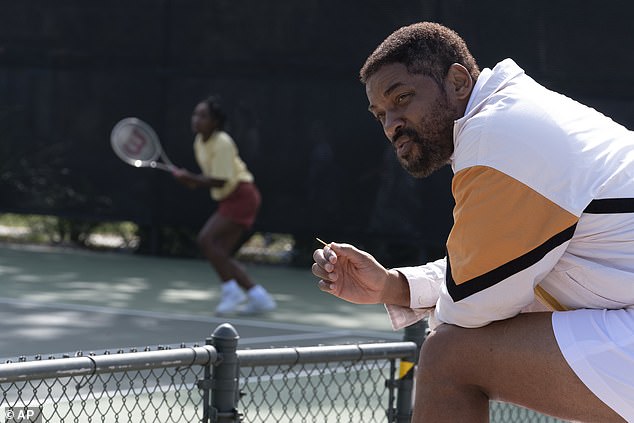 Winning: King Richard has been a hit with critics and boasts an impressive 90 percent fresh rating, with many reviewers singling out Smith’s moving performance