Zendaya steals the show in spider-like eye mask and dress with bedazzled webs alongside beau Tom Holland at Spider-Man: No Way Home premiere

Zendaya and Tom Holland naturally stole the show as they attended the world premiere of Spider-Man: No Way Home in Los Angeles on Monday evening.

The on-and-offscreen couple, both 25, were seen affectionately posing alongside one another at the Regency Village theatre, where they beamed bright ahead of the screening of their latest Marvel film.

The Euphoria star showed off one of her most head-turning and aptly themed red carpet looks, which included a spider-like eye mask and a plunging dress with bedazzled webs, while Holland looked dapper in a chocolate suit.

It-couple: Zendaya and Tom Holland, both 25,  stole the show as they attended the premiere of Spider-Man: No Way Home, which was held at the Regency Village theatre in Los Angeles on Monday evening 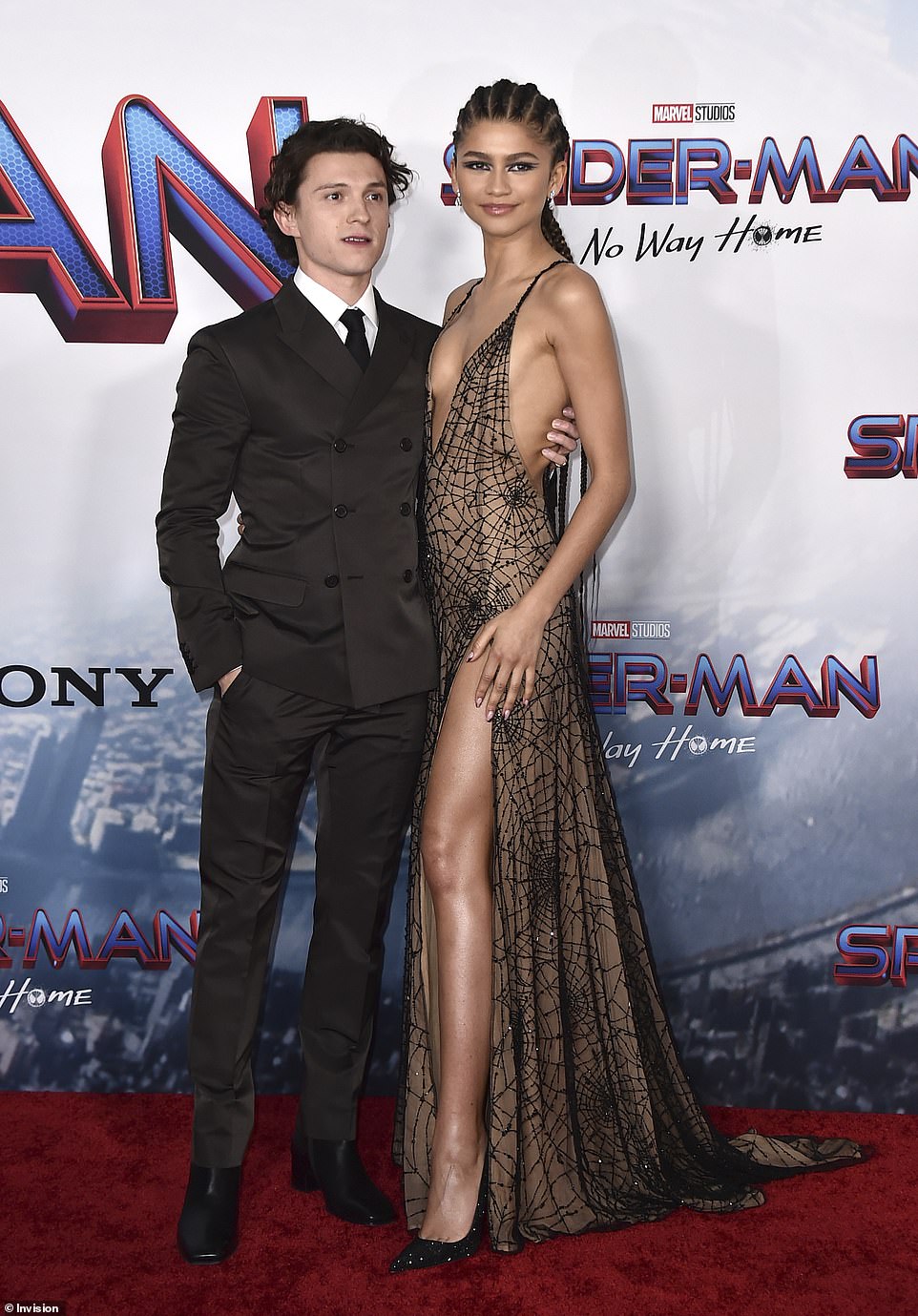 Adorable: The on-and-offscreen couple who reprised their roles as MJ and Spider-Man were seen posing for photos together

Zendaya — who never misses in the style department — rocked a plunging custom Maison Valentino dress which featured an exaggerated slit up the left leg.

The nude dress was nearly backless with the exception of thin black crisscross  straps and was adorned with ornate black beads fashioned to resemble a spider’s web.

The Emmy-winning actress paired the dress with Christian Louboutin pumps which also sparkled, and wore her hair in scalp braids which extended past her waist.

On her head she rocked a beaded and lace eye mask which was fashioned to resemble a black spider for more over the top glamour. 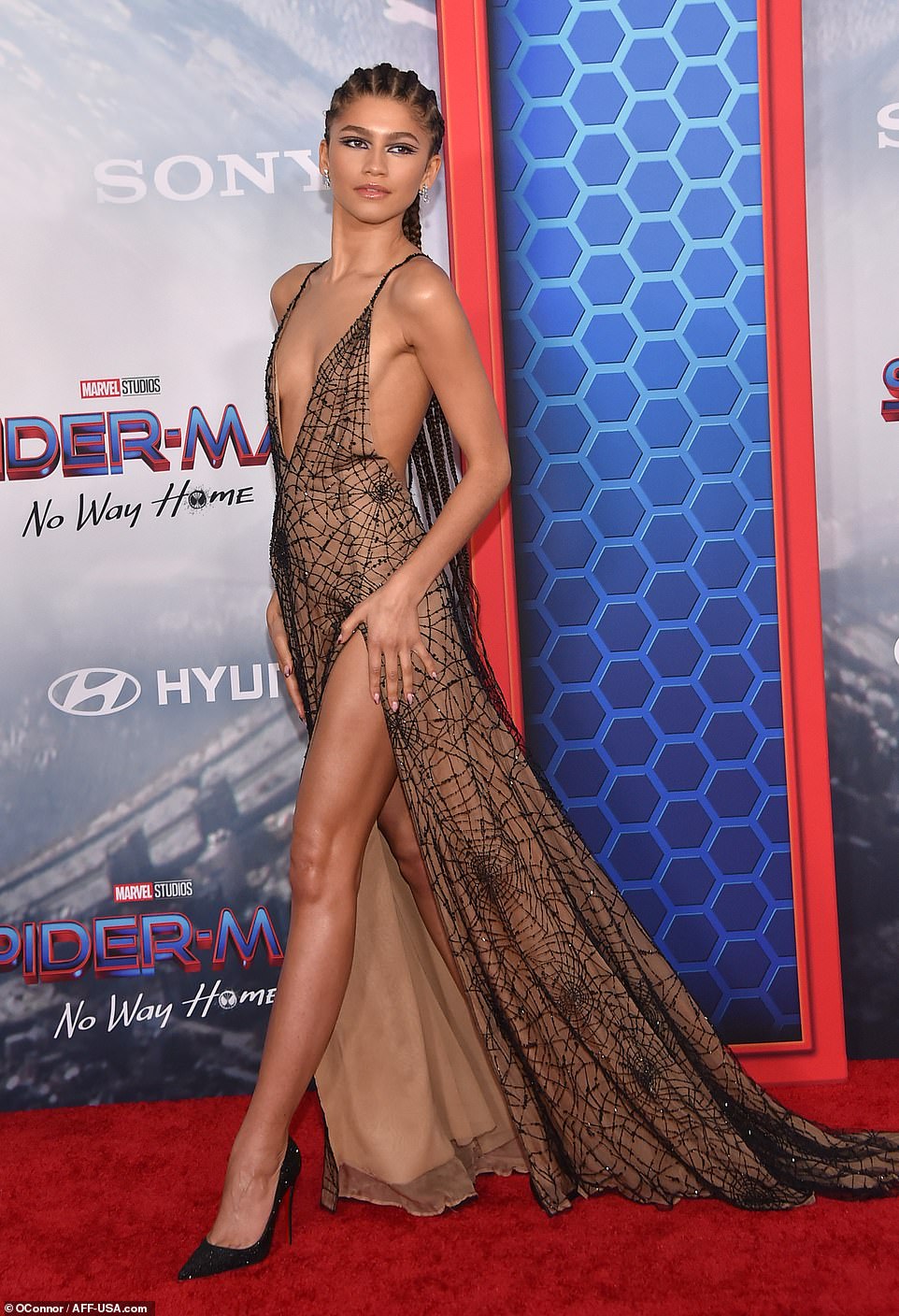 Stunning: The Euphoria star showed off one of her most head-turning and aptly themed red carpet looks, which included a spider-like eye mask and a plunging dress with bedazzled webs

Iconic: Her latest iconic fashion moment included a custom Maison Valentino dress and Christian Louboutin shoes which was put together by her go-to stylist Law Roach 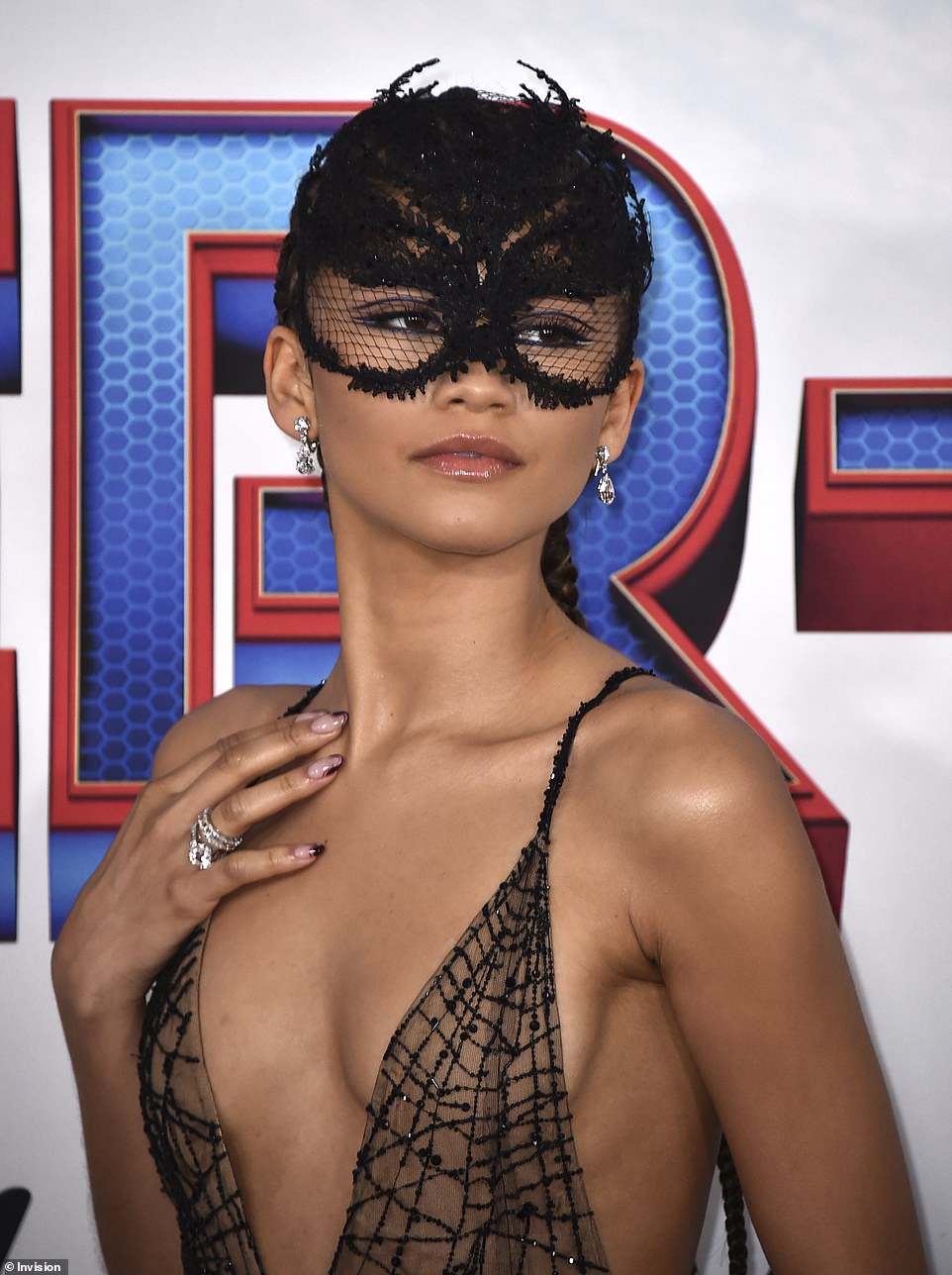 Beyond: The Emmy-winning actress proved to ace the theme as she showed off an eye mask which resembled a spider to pair with the slinky garment

She flashed stunning diamond drop earrings and a hefty sparkler and band on her fingers from Bulgari, and wore dramatic winged eye makeup in her lid crease.

The full look was put together by her go-to stylist Law Roach who helped curate another iconic fashion moment for Zendaya, and also styled Holland for the premiere.

Also rising to the occasion for his big evening, The Captain America: Civil War actor looked snazzy in a rich chocolate suit fashioned by Prada, and sleek Christian Louboutin boots with a thick block heel.

He radiated happiness with Zendaya by his side as they posed for a few photos together before some larger cast snaps. 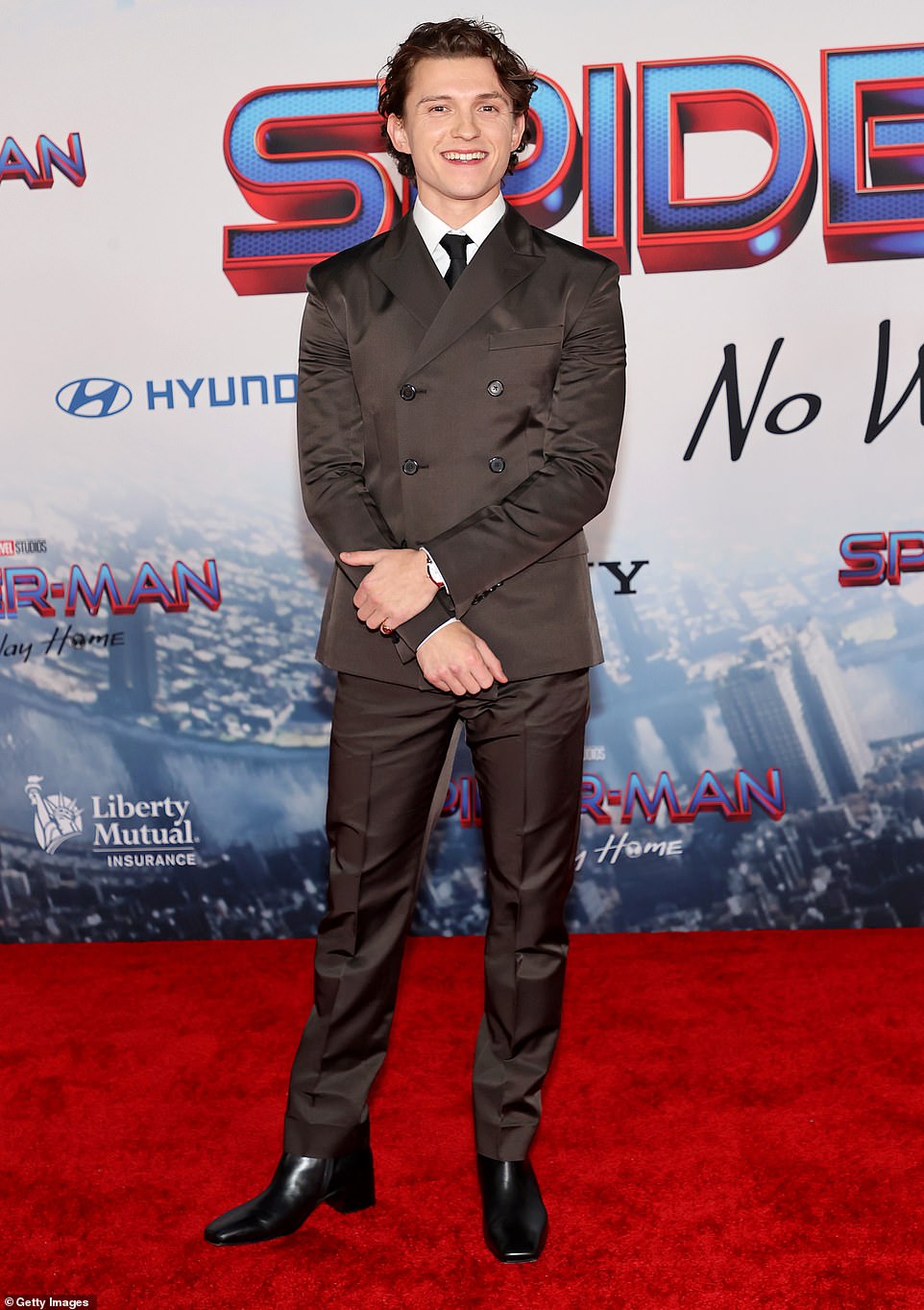 Killing it: Also rising to the occasion for his big evening, Holland looked snazzy in a rich chocolate suit fashioned by Prada and sleek Christian Louboutin boots with a thick block heel 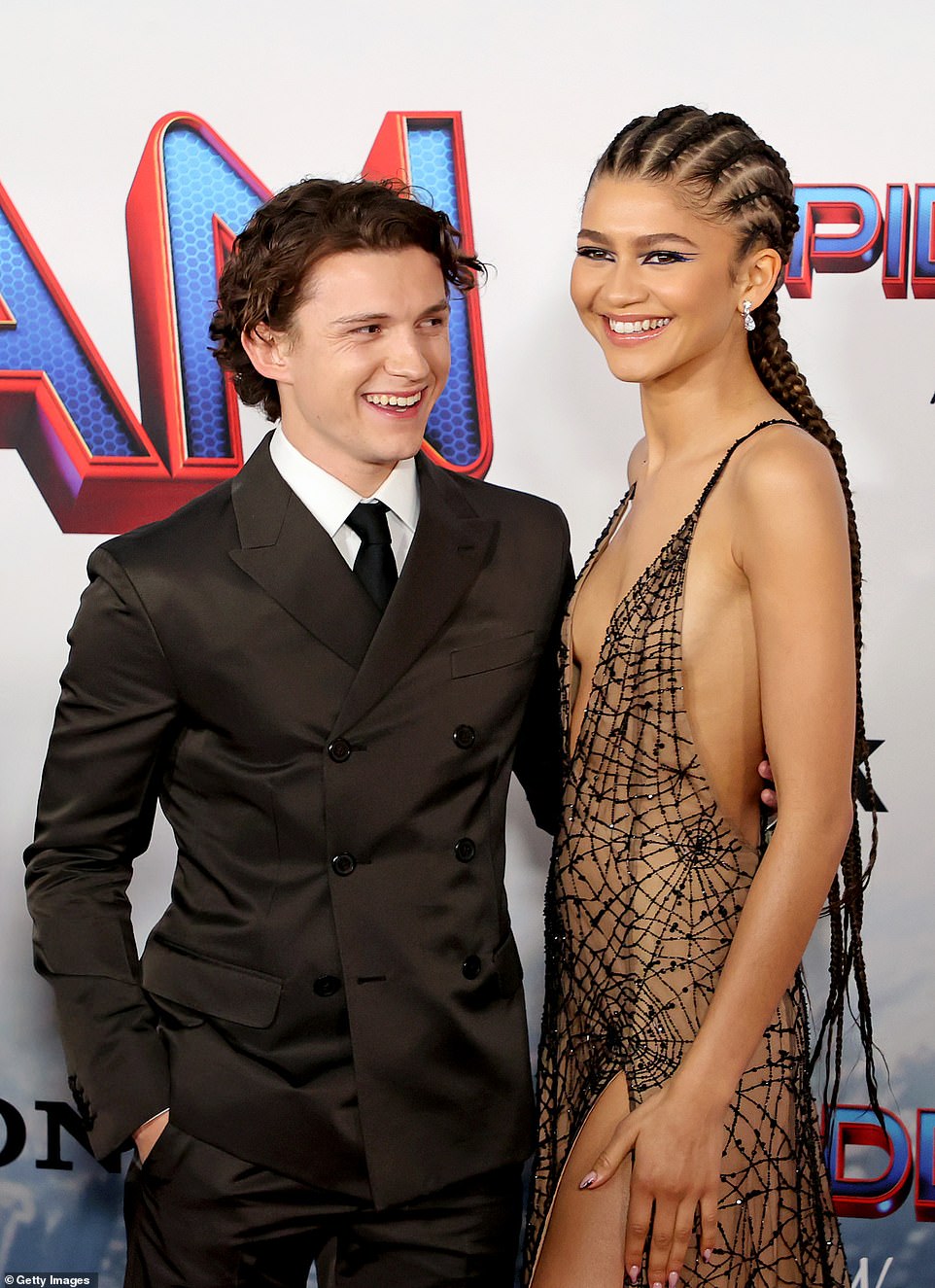 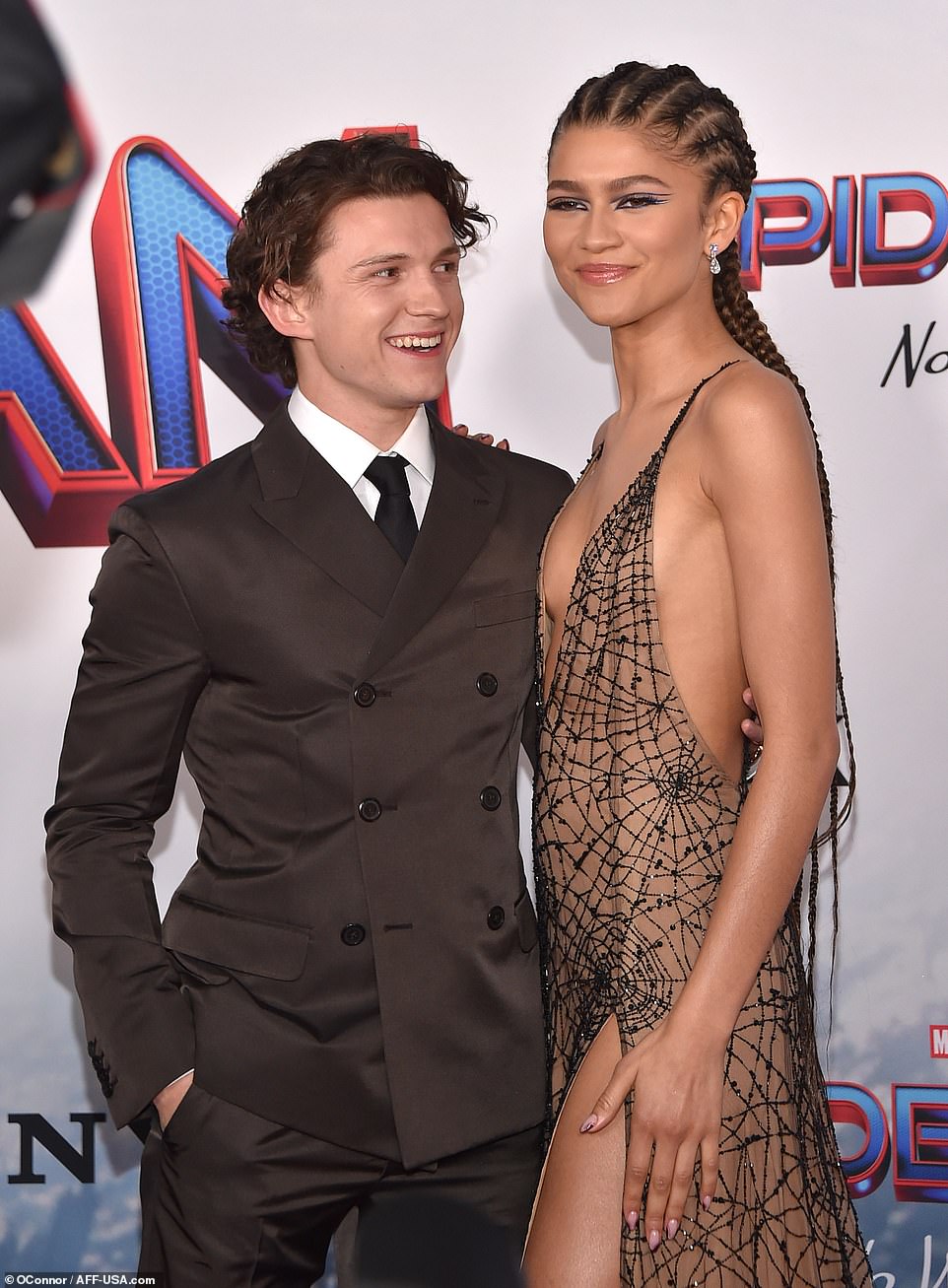 Perfect pair: The castmates turned lovers solidified their rumored relationship over the summer as they shared a kiss while driving in the Silverlake neighborhood of LA 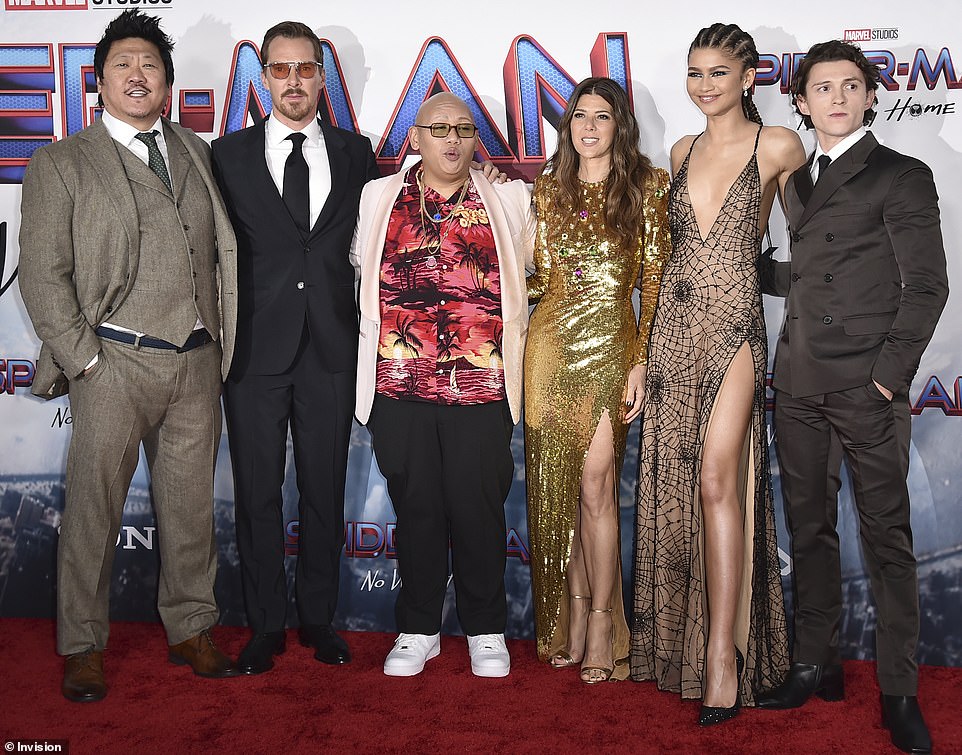 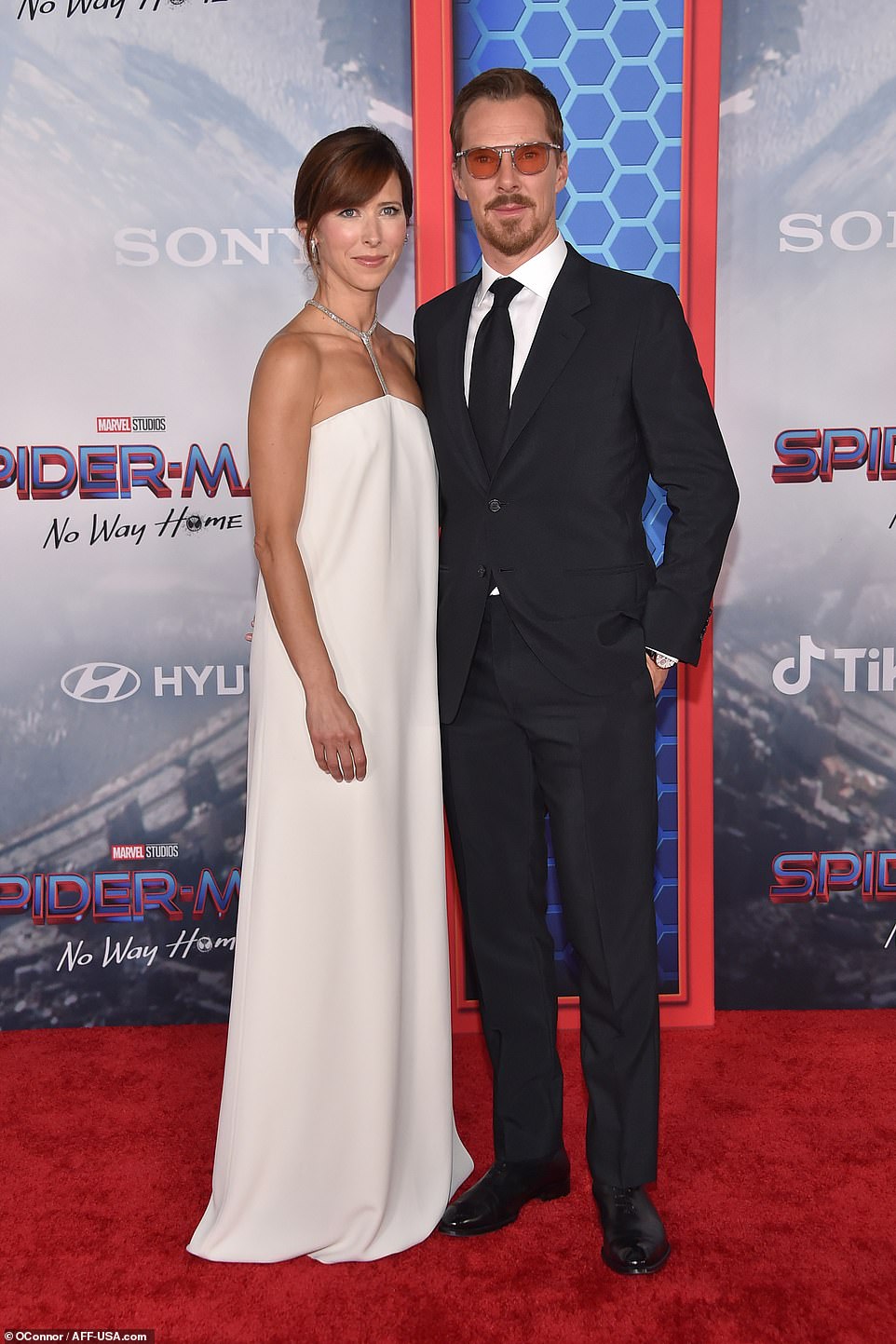 Dr. Strange: Benedict Cumberbatch who stars in the film as Dr. Stephen Strange was seen with his wife Sophie Hunter at the premiere 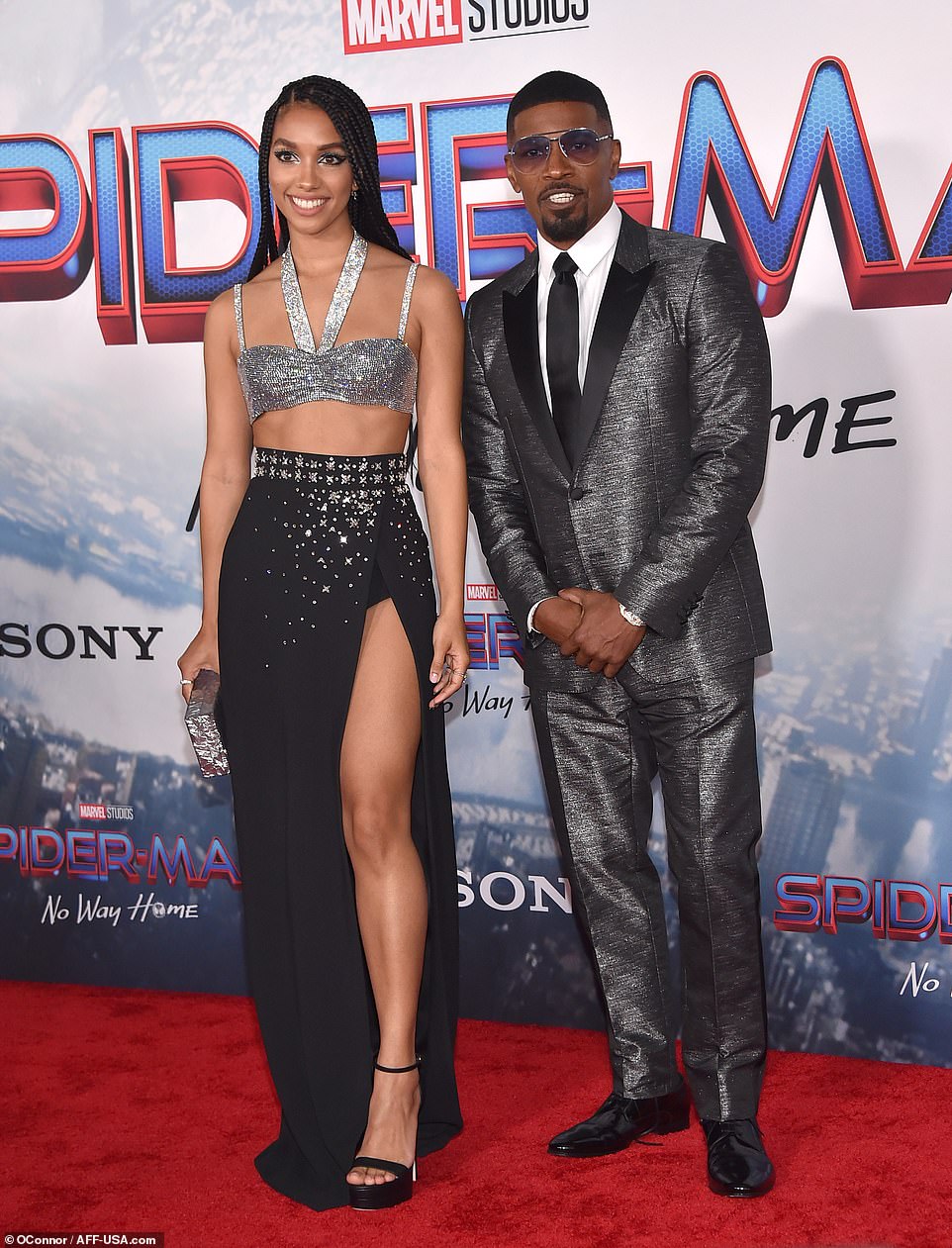 It’s electric! Jamie Foxx who plays Electro in the franchise was there with his daughter Corinne Foxx

The pair however had arrived separately, with Holland stopping dead in his tracks as he heard screams that indicated his leading lady had arrived at premiere.

During an appearance on SiriusXM’s Town Hall they slammed some ‘ridiculous’ statements and stereotypes for men and women based on height, with Tom clarifying that she’s ‘not that much taller’ than him — ‘maybe like an inch or two at best.’

Stylish duo:  Foxx (left) lit up the carpet in a glitzy pant suit while Jared Leto (right) wore one of his usual eye catching looks that included red trousers and a plunging blouse with velour blazer 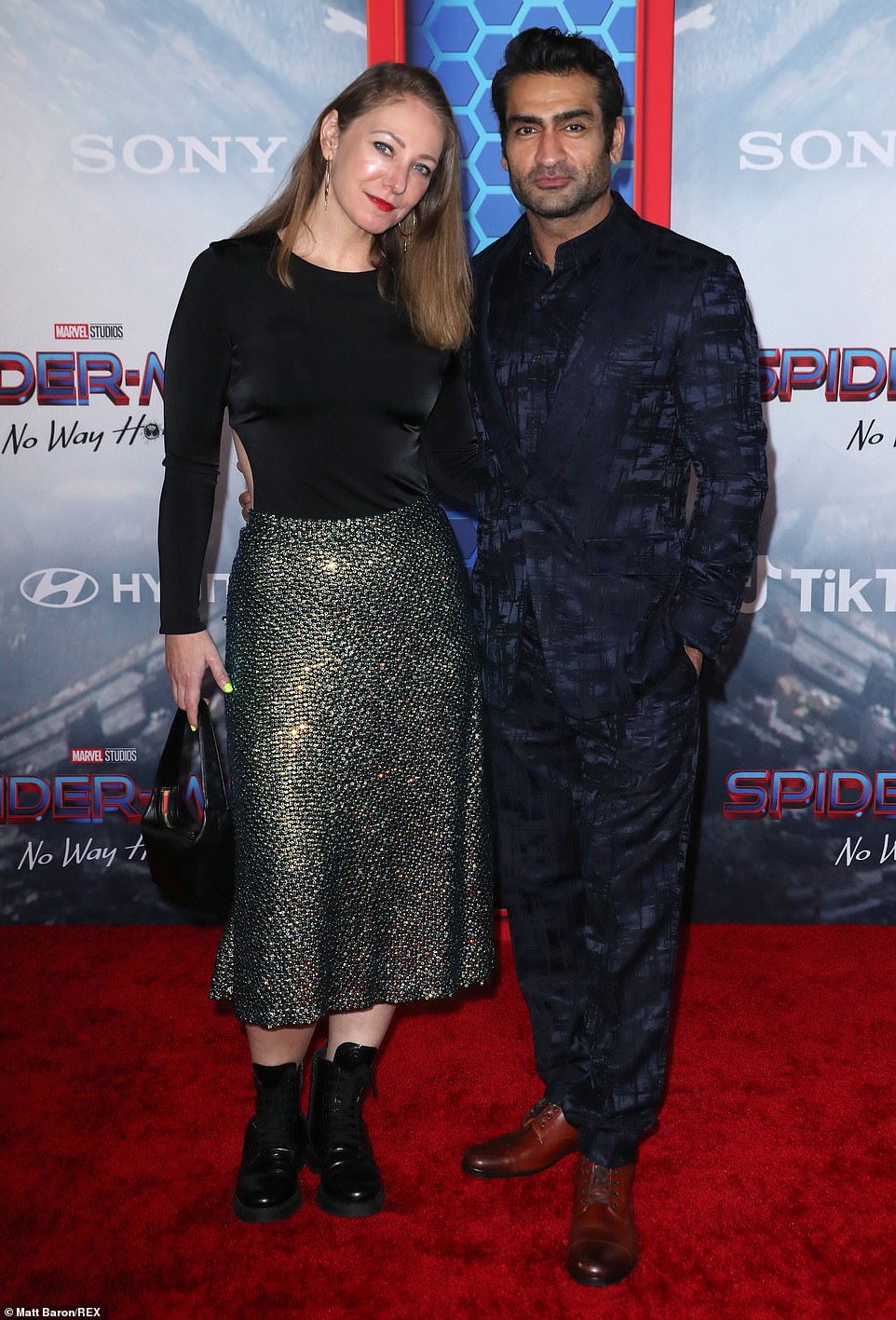 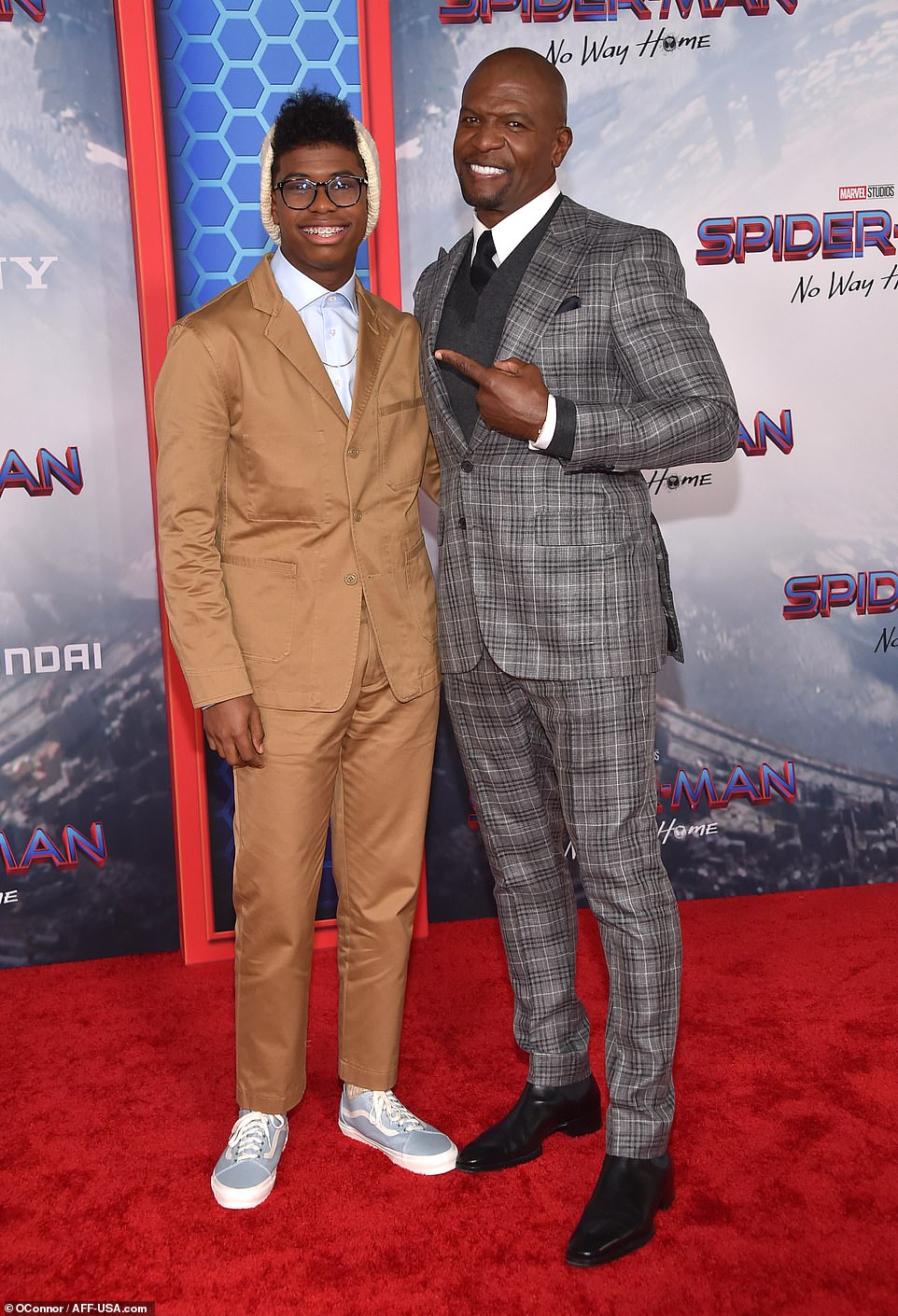 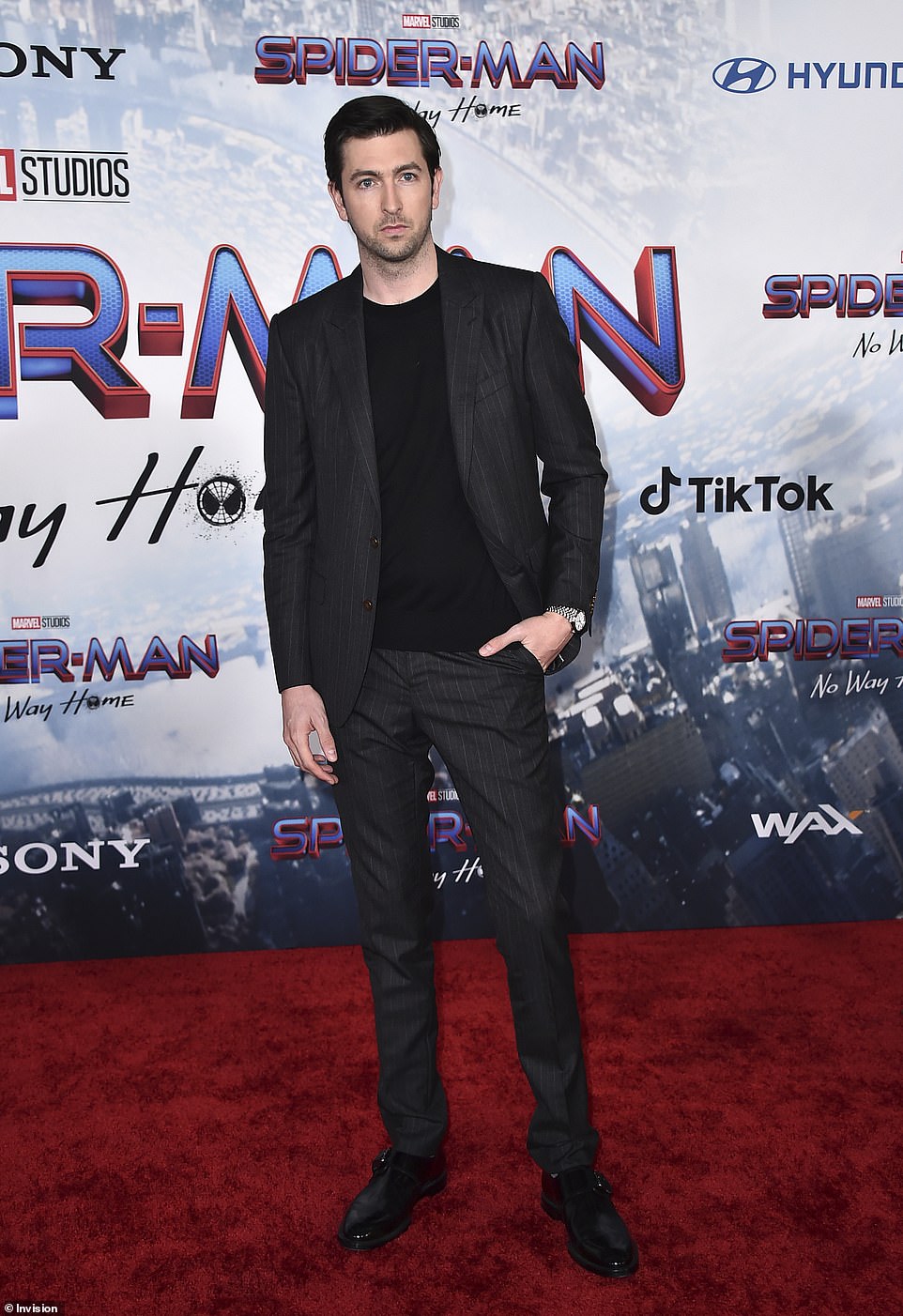 Spider-Man: No Way Home is the third film in the franchise starring Zendaya and Holland and the first one b The movie comes after 2017’s Spider-Man: Homecoming and 2019’s Spider-Man: Far From Home.

The 2021 film sees Peter Parker grappling with life and his reputation after his identity as a superhero was exposed by Mysterio (played by former Spider-Man star Jake Gyllenhaal) in the last movie.

With his life further on the line, he seeks out Dr. Strange (Benedict Cumberbatch) to help restore his secret identity, but this breaks open the multiverse as five supervillains from alternate realities who fought other versions off Spider-Man arrive. 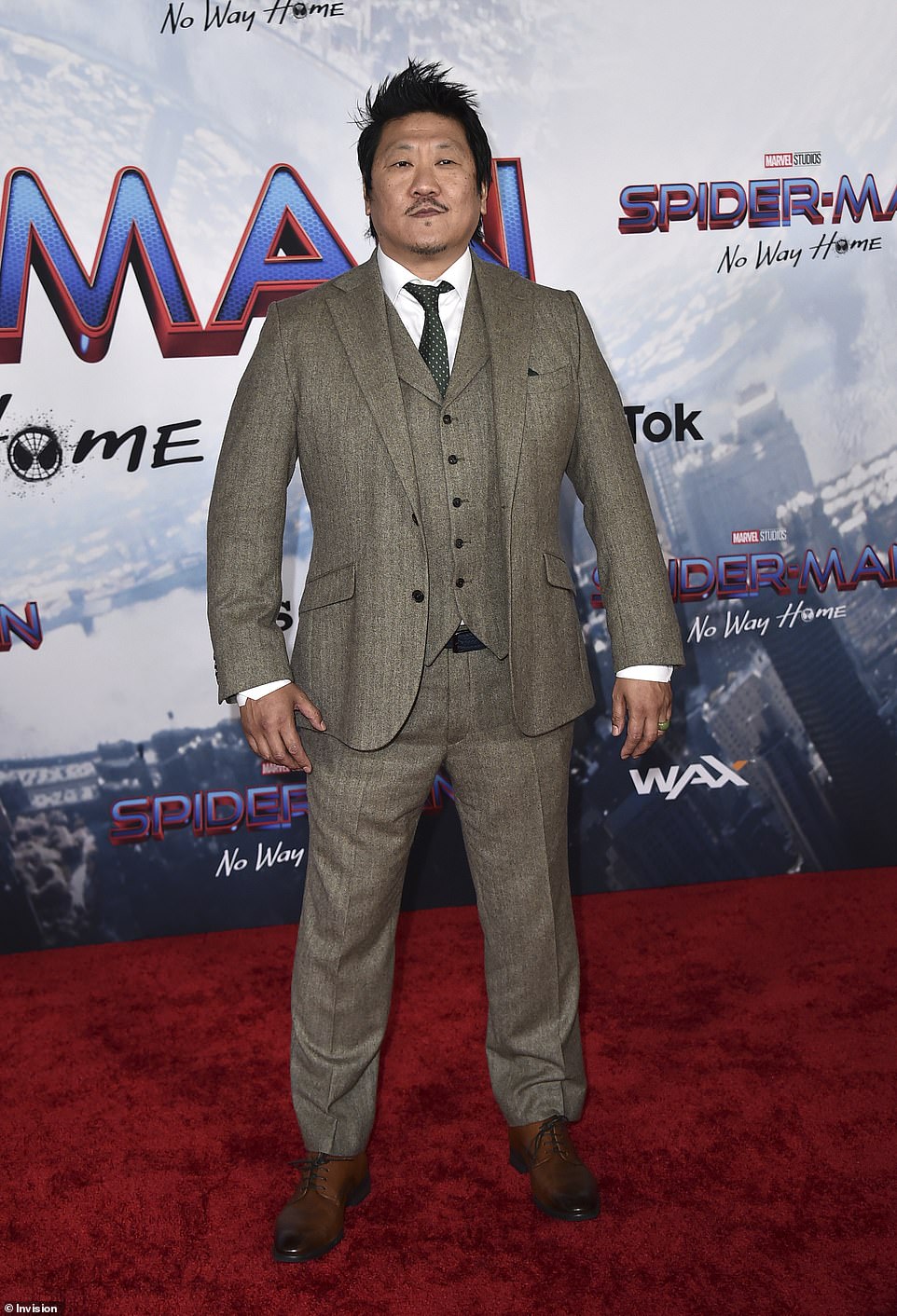 Wong: Benedict Wong who plays Master of the Mystic Arts and Strange’s mentor and friend was present

Supportive: Kid Cudi (left) who recently played a role in Don’t Look Up, and comedian Hannibal Buress (right) were in attendance at the screening 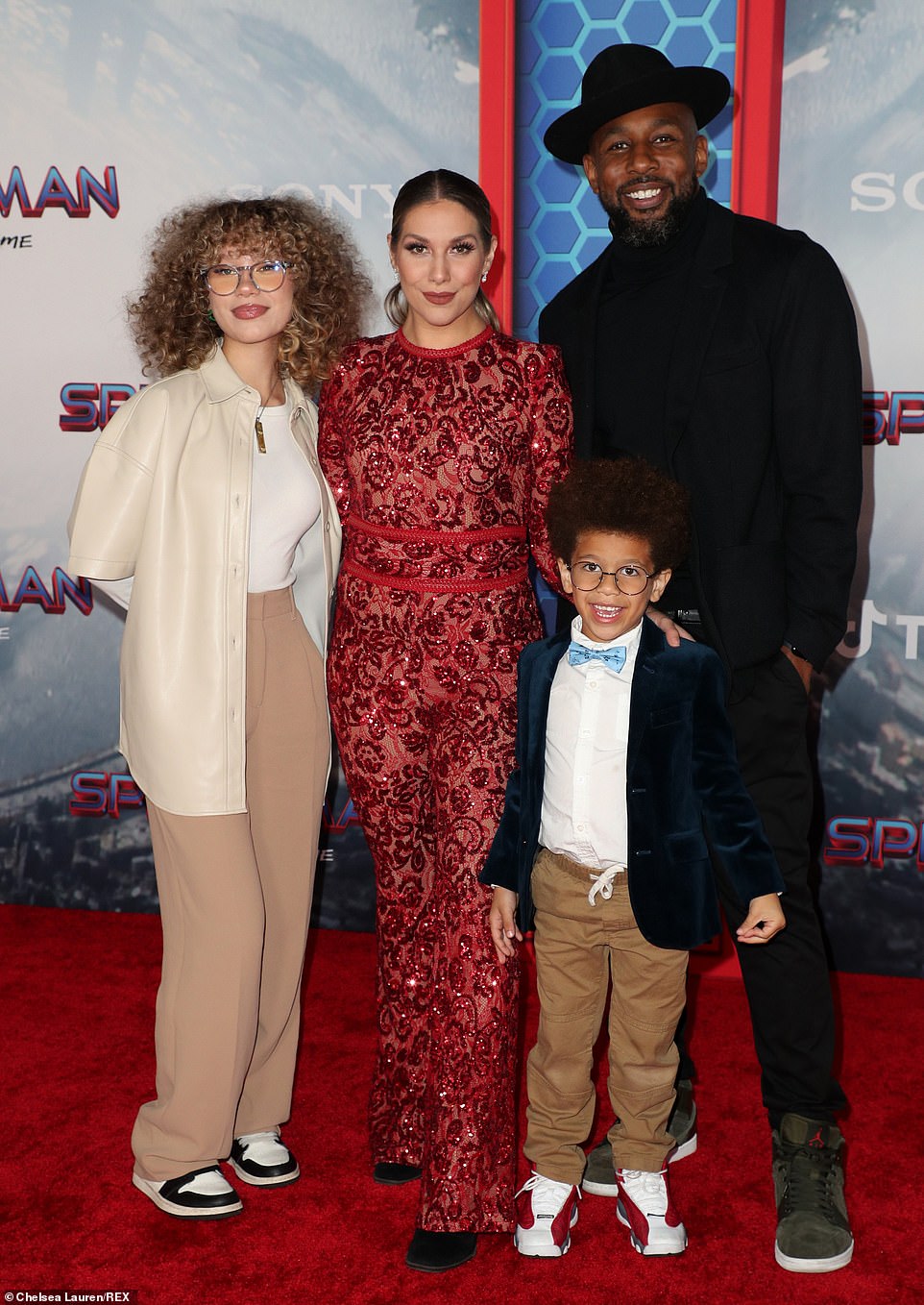