Australia’s new fleet of nuclear-powered submarines would preferably be based on an existing design, Defence officials have revealed, as part of a plan to get the boats in the water before 2040 to avoid a massive gap in the nation’s maritime defences.

Prime Minister Scott Morrison announced last month it was dumping a $90 billion agreement with France to build conventionally powered submarines and would instead develop a nuclear-powered fleet with Britain and the United States under a new defence pact called AUKUS. 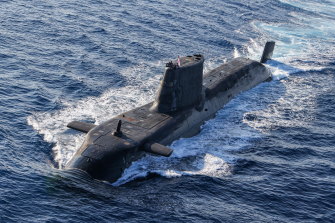 The Australian submarines may be based on Britain’s Astute class vessels. Credit:Royal Navy

The move has led to concerns there will be a significant capability gap, with the first of the existing Collins-class submarines scheduled to go out of service from 2038 and the nuclear-propelled submarines potentially not coming on line until the 2040s.

Chief of Navy, Vice Admiral Mike Noonan, recently revealed that the six Collins-class submarines, which were built in the 1990s, might need to undergo two complete rebuilds over the coming decades to keep them in operation if the nuclear boats are not ready by 2040.

But Vice-Admiral Jonathan Mead, the head of the government’s nuclear-powered submarine taskforce, said on Wednesday Australia was looking for a “mature” design from either Britain or the United States that could “accelerate the delivery of the first submarine in Australia in the 2030s”.

If it goes with an existing design, Australia would have to choose between the US’s Virginia-class submarines and Britain’s Astute-class boats. It is widely believed that Australia is more likely to develop a version of the Astute submarine because the British submarine is smaller and less expensive.

Vice Admiral Meade said the government was “looking at a mature design” and that could “accelerate the delivery of the first submarine in Australia in the 2030s”. He said “at the moment the aperture is wide” but the taskforce over the next 18 months will “narrow down the aperture and get us to the optimal pathway”.

“With the information we have at hand, we are confident that we will have a boat in the water by the end of the next decade,” he told a Senate estimates hearing,” he said.

Vice Admiral Noonan reiterated that the Navy had not ruled out conducting a life-of-type extension (LOTE), which gives the boat an extra 10 years of service, of the Collins-class submarines. A second LOTE – which involves cutting the submarine open and replacing its engine – would allow the submarines to operate into the 2040s and 2050s.

However, if there was evidence of “fatigue” in the submarine’s hull it may be unable to undergo a second LOTE.

“Hull fatigue will be a very important factor in determining whether or not it is possible to extend the Collins class beyond the current planned LOTE period,” Vice Admiral Noonan said.

Defence officials also revealed on Wednesday that a plan to build a new naval ship for the Pacific had been quietly dumped in favour of purchasing the vessel on the open market.

The Morrison government announced in 2018 that it would build a large, new naval ship that will cruise the South Pacific and help Australia’s neighbours deal with natural disasters.

But it was confirmed during the Senate estimates hearing that the government would instead purchase the ship to get into the water next year.