David Bowie once described what he didn’t want in the eventual movie about his life, and that was “some nerd in a red wig”. The big-budget biopic might be de rigueur in most rock legends’ life cycles these days, but in death no less than in life, this particular icon of the industry retains a different kind of fascination.

“Moonage Daydream is not a biographical film,” says Brett Morgen, the LA filmmaker best known by music fans for his visceral Nirvana documentary of 2015, Cobain: Montage of Heck. 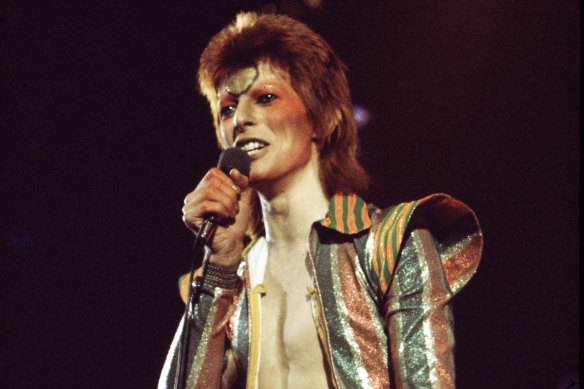 The goal of new David Bowie film Moonage Daydream is to “invite the audience to have an intimate, sublime experience with Bowie,” says director Brett Morgen.Credit:Getty Images

Morgen is in Melbourne this weekend for the film’s Melbourne International Film Festival premiere, following its acclaimed Cannes debut in May.

Moonage Daydream was created “using the same methodologies and techniques that Bowie applied to his creative work,” he says. “The goal of the film is to invite the audience to have an intimate, sublime experience with Bowie.” 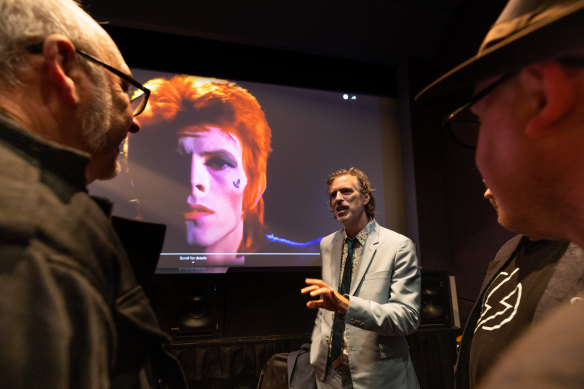 Morgen with Bowie fan club members at the Victorian College of the Arts on Thursday.Credit:Jason South

For fans the IMAX premiere, taking place several weeks ahead of the rest of the world, is an event of historic proportions. It’s the first Bowie documentary made with the approval of the late English icon’s estate, and with full access to his reputedly massive archive of sound and vision.

“He was such a fundamentally visual artist,” says Adam Dean, president of Australia’s online Bowie fan club and information resource, bowiedownunder.com (BDU), “so for people to experience his work in optimal quality on a large screen is so important.”

So is the music, of course. For BDU member Harry Williams, Bowie’s long-term studio right hand Tony Visconti is “the keeper of the flame”: the original stem recordings of Bowie’s six decades of music. “When I read that Tony was so thrilled about the project, that said to me, OK, this is going to be the real deal.”

The fact that Bowie himself effectively narrates the story, sans talking heads and critical rumination, is another big plus. “To me, that’s going to be really, really enlightening,” Williams says.

BDU fans are variously intrigued about different moments in Bowie’s shape-shifting arc, from the flamboyant Ziggy Stardust era to the austere Thin White Duke phase to his revitalised experimental period of the ’90s, none of which ever visited Australian stages.

Louise Coulter is hoping for some previously unseen material from the 1974 Diamond Dogs tour of the USA, or at least, “some high-quality restoration of footage that we’ve been swapping on crappy third-generation VHS copies for years.”

BDU archivist Bruce Butler is excited about the emergence of upgraded surround sound mixes from Bowie’s so-called “Berlin era” of the late ’70s. “I’m hoping it might be a forerunner to some new audio releases in that regard,” he says. “But mainly … here’s someone that’s had access to the vault. What else is in there? I believe there is quite a bit of new material that no one’s seen. So I’m looking forward to being surprised.”

MIFF’s Moonage Daydream sessions are sold out this weekend but tickets are available for Brett Morgen’s talk with Zan Rowe at the Wheeler Centre on Sunday at 11am. The film goes on general cinematic release from September 15.