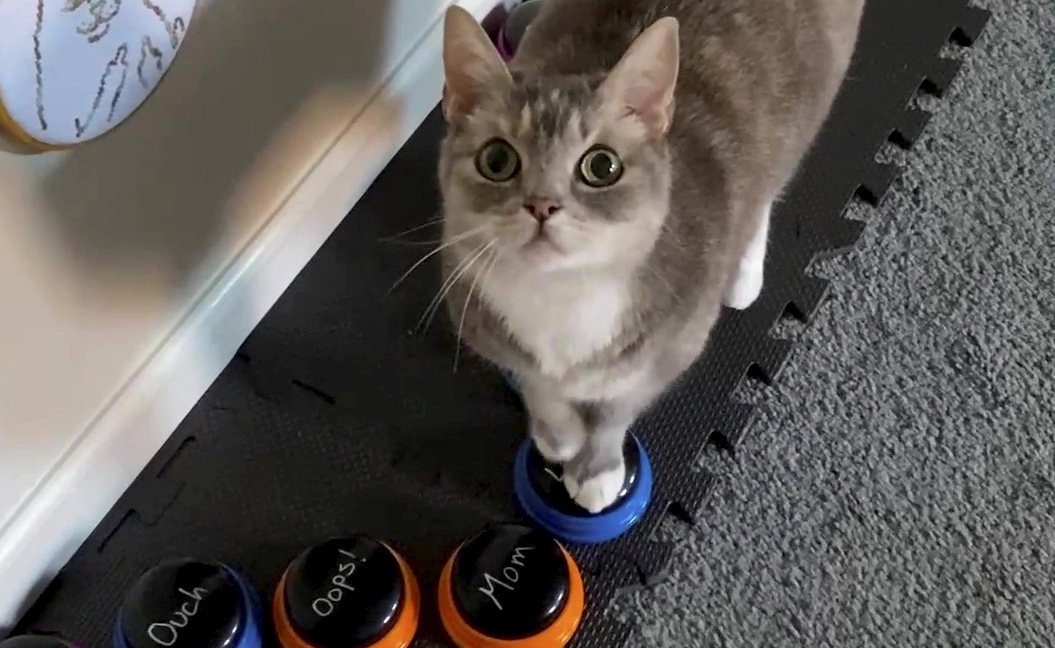 Watch this incredibly intelligent cat use paw-activated buttons to speak with her owner to convey her feelings and needs.

Billi, a 12-year-old house cat, can be seen deftly navigating a complex series of buttons in order to communicate with her owner, Kendra Baker.

Veterinarian Kendra, 33, revealed Billi has 30 different buttons and is consistent with 27 of them, including ‘catnip’, ‘yes’, ‘no’, ‘outside’, and ‘mad’.

Billi is still trying to figure out more abstract concepts like making a ‘mistake’ and is in the process of learning how to use her new ‘oops’ button.

‘I’m not responsible for building the buttons,” said Kendra, from Baltimore, Maryland.

‘The person who originally created this technique meant for it to be used on nonverbal children.’

Surprisingly, Billi didn’t learn these tricks as a young kitten, but instead became an intellectual during her golden years.

Kendra added: ‘I taught Billi these tricks last May. She was already 11 when she learned how to do this.

‘An old cat can learn new tricks. I have a lot of experience working with animals and training them. You can teach an animal just about anything.’

Despite Billi’s capacity to learn, Kendra isn’t totally convinced that Billi can truly understand what the buttons are saying.

She added: ‘Do animals understand words the way we understand them? We will never be able to answer that definitively.

‘Does she use the words in the correct context? Yes. But getting into what Billi actually understands is tough to say.’

As for how she actually taught Billi these tricks, Kendra claims she never uses treats.

She added: ‘I taught her this through modelling. I started with the “food” button.

‘I’d press the button every time I’d feed her. After three and a half weeks she started pressing the button when she was hungry. It became this repeatable thing.

‘I would say that if you were to do this with a dog I would not recommend starting with a food button because it will be too stimulating.’

Get in touch at [email protected]