King Charles III and Queen Consort Camilla visited Dunfermline in Scotland today to officially celebrate its new status as a city, and the pair greeted the waves of people who lined up to see them. Charles beamed as he spoke to the public, while Camilla threw herself into supporting her husband as Queen Consort.

Since the Queen’s death on September 8, Camilla has been by Charles’ side as he navigates this new royal territory.

And during their outing today, Charles’ body language showed his “delight” at being among the people as King, according to a body language expert.

Body language expert Judi James said: “Although Charles seemed to modify his body language from almost day one of becoming King, Camilla is showing few signs so far of any higher status or truly regal signals during this first official visit since the mourning period ended.

“Charles looks like a man gazing with some surprise and delight at a new dawn in terms of his popularity. 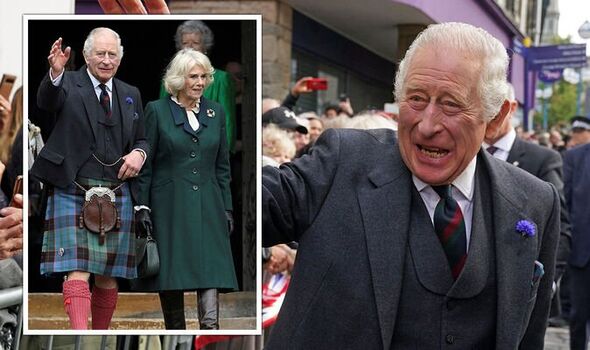 “He hails the crowds personally with an increased air of confidence, throwing his hand high in the air and outward in a gesture of mutual friendship.

“His smile is one of pure joy, with his mouth open and his lower lip squared as his cheeks and eye area are wrinkled in happiness.

“He works the crowds in this manner by himself and even when Camilla is walking next to him it is clearly Charles’s show, with no attempt to share the spotlight by a rather tense-looking Camilla.”

Camilla appeared devoted to supporting her husband during their first official joint engagement as King and Queen Consort.

Judi claimed: “Camilla’s tension is visible in her pose during Charles’s speech, too.

“She looks perched on her chair rather than relaxing into it a little, with her hand clasped on her lap and her shoulders looking raised and slightly hunched as she gazes up at her husband.

“If she is to maintain this style of body language, which is very much one of an unassuming, rather anxious-looking supporter of her husband, it could well be complementary to Charles’s personality as King.

“He was outshone and upstaged by Diana and out-ranked by his mother before being eclipsed again by his son William and his adorable family. 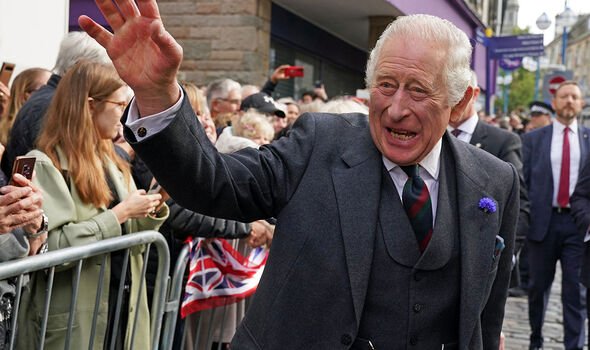 “To finally be out in the full glare of the spotlight and cheered and mobbed by crowds as he does must feel very pleasing to him.”

Camilla appears to be following in the footsteps of another famous royal consort, the late Prince Philip.

Until he retired in 2017 at the age of 96, Philip served the Queen as a working member of the Royal Family.

And while Philip famously was very opinionated, his dedication to the Queen never wavered and he always took on a supporting role. 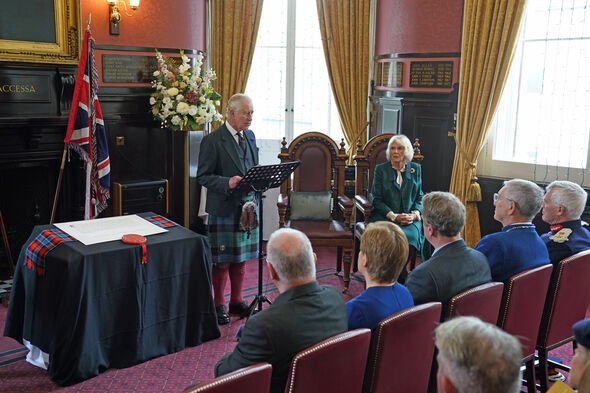 In a BBC tribute documentary, Prince Philip: The Royal Family Remembers, Camilla said of the Duke: “I saw the way he supported the Queen, not in a flashy way but just by doing it quietly.” She added: “It’s something I’ve learned by.”

Later today, Charles and Camilla will welcome hundreds of guests to their new official Scottish residence, the Palace of Holyroodhouse in Edinburgh.

Poignantly Charles will also hold an investiture, his first as monarch.